Read The Woman Who Died a Lot: A Thursday Next Novel Online

The Woman Who Died a Lot: A Thursday Next Novel 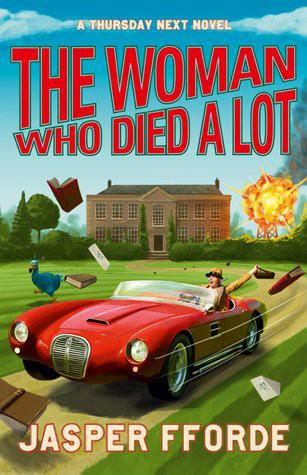 The Woman Who Died

The Thursday Next Series

LOST IN A GOOD BOOK

THE WELL OF LOST PLOTS

ONE OF OUR THURSDAYS IS MISSING

THE BIG OVER EASY

THE SONG OF THE QUARKBEAST

Jasper Fforde traded a varied career in the film industry for staring out of the window and chewing the end of a pencil. He lives and works in Wales and has a passion for aviation. Find out more at www.jasperfforde.com

This book has been bundled with
Special Features
including:

The Making of
. . . wordamentary, deleted scenes, alternative endings and much more.

THE WOMAN WHO DIED A LOT

First published in Great Britain in 2012 by Hodder & Stoughton

The right of Jasper Fforde to be identified as the Author of the Work has been asserted by him in accordance with the Copyright, Designs and Patents Act 1988.

To all the librarians

that have ever been

this book is respectfully dedicated

The Special Operations Network was formed in 1928 to handle policing duties considered too specialized to be tackled by the regular force. Despite considerable success in the many varied areas of expertise in which SpecOps operated, all but three of the thirty-six divisions were disbanded in the winter of 1991–92, allegedly due to budgetary cutbacks. By 2004 it was realized that this had been a bad move, and plans were drawn up to re-form the service.

E
verything comes to an end. A good bottle of wine, a summer’s day, a long-running sitcom, one’s life, and eventually our species. The question for many of us is not that everything
will
come to an end but
when
. And can we do anything vaguely useful until it does?

In the case of a good bottle of wine, probably not much— although the very act of consumption might make one believe otherwise. A well-lazed summer’s day should not expect too much of itself either, and sitcoms never die. They simply move to a zombielike existence in rerun heaven. Of the remaining two—the end of one’s life and that of our species—regular subscribers to my exploits will recall that I had seen myself die a few years back, and, given my past record, it would be probable that much useful work would be done between then and now. As to the end of our species, the possibility of annihilation was quite real, well documented, and went by the unimaginative title of Asteroid HR-6984. Whether the human race managed to figure out a worthwhile function for itself in the thirty-seven years until possible collision was dependent upon one’s level of optimism.

But it wasn’t all bad news. In fact, due to a foible of human nature that denies us the ability to focus on more than one threat at a time, the asteroid was barely news at all. HR-6984’s convenient lack of urgency and its current likelihood of hitting the earth at only around 34 percent had relegated it well past such front-page news as the stupidity surplus and the current round of fiery cleansings by an angry deity. Instead the hurtling lump of space debris was consigned to pop-culture damnation on page twelve: Sandwiched somewhere between guinea-pig accessorizing and the apparently relevant eating habits of noncelebrities.

The Charming Way by Grayson, Kristine
Draggah by Toby Neighbors
The Shadow Man by John Katzenbach
Finaly My Heart's Desire (Meant for Me Book 2) by St. James, Brooke
Christmas Kismet by Grey, Jemma
Shah of Shahs by Ryzard Kapuscinski
Arabesque by Geoffrey Household
Ghost Ship by Kim Wilkins
Dark Knight of the Skye by Ray, Robin Renee
Caught Inside by CJ Hawk