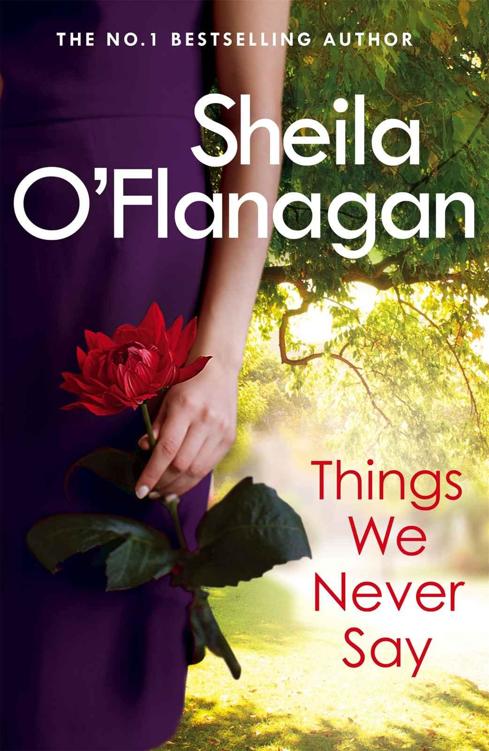 Abbey Andersen's life in San Francisco is in serious danger of hitting a rut. She's pretty sure it doesn't get worse than being dumped by post-it note, and her current job is hardly the best outlet for her creative talents.

Meanwhile in Ireland Fred Fitzpatrick is finding it impossible to keep his grown-up children and their families on side, and they're a demanding lot at the best of times.

But when Fred asks solicitor Ryan Gilligan to contact Abbey about a long-buried family secret, things start to change dramatically.

And not everyone affected is happy about it...

The right of Sheila O’Flanagan to be identified as the Author of the Work has been asserted by her in accordance with the Copyright, Designs and Patents Act 1988.

First published as an Ebook by HEADLINE PUBLISHING GROUP in 2013

If You Were Me

The irresistible new novel from No. 1 bestselling author Sheila O’Flanagan.

Abbey Andersen is the last person to go looking for change. Yes, it’s tough that she barely sees her mother these days – but in San Francisco she has great friends, a steady relationship and a job she enjoys. When Abbey is contacted by Irish lawyer Ryan Gilligan she learns in an instant everything she believed about her roots is a lie. She must travel to Dublin to find out more – but she’s scarcely off the plane when she’s plunged into a new crisis. One that will change everything not just for Abbey but for the family in Ireland who had no idea that she even existed. Now Abbey has to make a choice that will affect everyone she knows. How can she be sure she makes the right one? And can life ever be quite the same again?

Sheila O’Flanagan is the author of many bestselling novels, including
Better Together
,
All For You
,
Stand By Me
,
The Perfect Man
,
Someone Special
and
Bad Behaviour
, as well as the short story collections
Destinations
,
Connections
, and
A Season to Remember.

Sheila has always loved telling stories, and after working in banking and finance for a number of years, she decided it was time to fulfil a dream and give writing her own book a go. So she sat down, stuck ‘Chapter One’ at the top of a page, and got started.

He’s Got To Go

Too Good To Be True

Dreaming Of A Stranger

How Will I Know?

A Season To Remember

‘A big, touching book sure to delight O’Flanagan fans’

‘A big, comfortable, absorbing book … bound to delight fans and guaranteed to put O’Flanagan on the bestsellers list – yet again’

‘A very warm and touching book… Deserves to be a bestseller’

‘Romantic and charming, a real must-read’

A reader once said to me that it must be hard coming up with so many ideas for books. Truthfully, the ideas are easy, it’s doing justice to them in the final book that’s hard! The concept behind
Things We Never Say
has been rattling around in my head for a long time but eventually I felt I’d found the right characters to bring it to life. I hope I’ve done justice to their stories.

I was – as always – helped along the way by some wonderful people:

The fantastic team at Hachette/Headline in so many countries.

The publishers and translators around the world who work so hard on my behalf.

Even after all these books my family and friends are great cheerleaders and supporters and I thank all of them, especially my mum, Patricia, for staying with me on the journey.

Big thank you to Colm for spotting the deliberate mistakes!

A special thanks to Paula Duffy for the legal help on Wills (I know now why I never became a lawyer!). Any errors in law are entirely my own.

Thanks to Alison Riordan for giving me the benefit of her knowledge and experience of medical emergencies.

Thanks also to the booksellers and librarians who have supported me for so long.

Most of all, thanks to all my readers, new and old, especially those of you who’ve got in touch with me through my website, Facebook or Twitter. It’s always lovely to hear from you. I hope you enjoy this one!

PART 1
THE PAST
Chapter 1
Tipperary, Ireland: 55 years ago

Dilly was terrified but she was trying her hardest not to show it. She wanted to appear strong no matter how she felt inside. It was important not to give in. So she kept her eyes tightly closed, shutting out her surroundings and trying to imagine that she was somewhere else. In the meadow behind the farm, perhaps, with the smell of the newly mown hay on the breeze and the heat of the sun on her back. The meadow was a good place to be. But then, anything was better than here.

‘Look at me when I’m talking to you.’

The words were icy cold and Dilly didn’t have to open her eyes to see the face of the woman she’d secretly nicknamed Fury. It was already fixed in her mind. Long and narrow. Lips clamped into a thin, angry line. Eyes flinty grey behind steel-rimmed glasses which rested on a sharp nose. The nose was red with anger, the same anger that made the cheeks almost white. Dilly could count on one hand the number of times she’d seen that face not looking angry. And even then it never looked particularly happy. Dilly couldn’t understand why. Surely the woman should be happy? She’d chosen her life, hadn’t she? Unlike Dilly, who hadn’t exactly chosen hers.

This time Dilly allowed her eyes to open slowly. The face was as she’d expected, although the mouth was even thinner than usual and the cheeks whiter than ever.

‘Where did you think you were going?’

I was leaving, thought Dilly. Running away. It was a stupid idea, of course, because there was nowhere for her to run to. But even nowhere would be better than here. Wouldn’t it? She didn’t say the words out loud. Fury didn’t really want her to speak. She knew that already.

‘I do my best.’ There was a despairing tone to the woman’s voice. If anyone else had heard it, it would have seemed as though her patience had been tested to its very limits. As though she genuinely had tried and tried without success. As though Dilly had worn her down.

‘Wouldn’t you agree that I do my best?’

This time an answer was expected. Dilly tried, but although she formed the words, her mouth was too dry to speak.

‘Cat got your tongue?’

‘What am I going to do with you?’ The voice was still despairing but there was an undercurrent of hardness. ‘What will make you understand that there are rules and you have broken them?’

Dilly knew there were rules. Over the last few months her life had been framed by them. But they weren’t her rules, and she didn’t want to live by them. She wanted a different life altogether. She wanted freedom. To go wherever she chose. To be the person she’d dreamed of being. She wanted to walk outside the walls that surrounded the big granite building and to keep on walking until she reached the sea. Then she wanted to get on a boat. She didn’t care where it was going. And after that – well, maybe she’d keep on moving. There was no reason for her to stay after all.

Dilly hadn’t realised that she was on her knees. How strange, she thought, that I didn’t know that. That I didn’t realise she was towering over me because I was on the floor. My mind must be going.

But Dilly couldn’t move quickly. She used the arm of the big chair to haul herself to her feet. Then she fumbled at the threadbare band that held her golden hair back from her face, adjusting it so that there wasn’t a single strand out of place.

Blame it on Texas by Amie Louellen
The War Against the Assholes by Sam Munson
Moonlight on Water by Jo Ann Ferguson
To Summon Nightmares by J.K. Pendragon
Night Games: And Other Stories and Novellas by Arthur Schnitzler
The Pirate Prince by Michelle M. Pillow
Hunter's Moon by John Townsend
The Maltese Falcon by Dashiell Hammett
Loss by Tony Black
Wish I May by Ryan, Lexi