Read Throw Them All Out Online

Throw Them All Out 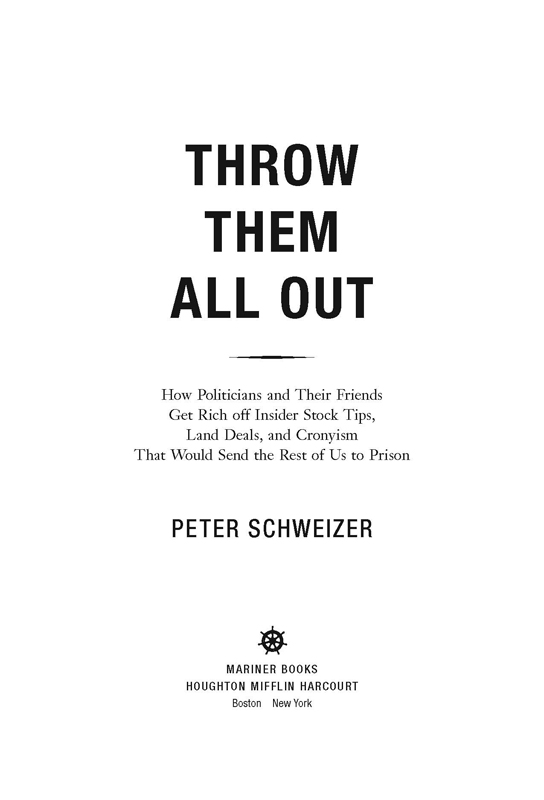 2. CRISIS FOR ALL, OPPORTUNITY FOR SOME

5. SPREADING THE WEALTH ... TO BILLIONAIRES

8. SOME ARE MORE EQUAL THAN OTHERS

There is so much honest graft in this big town that they would be fools to go in for dishonest graft.

"Return on investment" to members of Obama's National Finance Committee

W
E'VE ALL HEARD
about the New Rich. Once, they were the Oil Rich. Then they were the Silicon Valley Rich. The Dot-Com Rich. Now it's time to meet the New New Rich: the Government Rich.

For the Government Rich, insider deals, insider trading, and taxpayer money have become a pathway to wealth. They get to walk this exclusive pathway because they get to operate by a different set of rules from the rest of us. And they get to do this while they are working for us, in the name of the "public service."

This is not another book about socioeconomic issues, campaign finance, or political action committees. And it's not about the kind of corrupt politicians who stuff money in their freezers. If anything, corrupt politicians of that sort are vintage stuff now. Dishonest graft is quaint. This is a book about how a Permanent Political Class, composed of politicians and their friends, engages in honest graft. Let's call it crony capitalism. Here the "invisible hand" is often attached to the long arm of Washington. And business is good.

Consider just one example: Dennis Hastert was a jovial exâhigh school wrestling coach and member of the Illinois House of Representatives when he was first elected to Congress in 1986. Through hard work, attention to detail, and a knack for coalition building, he rose to be Speaker of the House in 1999 and served until 2007, when he resigned. When Hastert first went to Congress he was a man of relatively modest means. He had a 104-acre farm in Shipman, Illinois, worth between $50,000 and $100,000. His other assets amounted to no more than $170,000. He remained at a similar level until he became Speaker of the House.
1
But by the time he set down the Speaker's gavel, he was substantially better off than when he entered office, with a reported net worth of up to $11 million.

Washington today is full of politicians like Hastert. They have unprecedented opportunities, rich friends, and tight webs of influence. The famous sociologist Max Weber once gave a lecture where he discussed "politics as a calling." He talked about people who would live for politics. But he also pointed out that some people would live
from
it.
2
"Either one lives 'for' politics or one lives 'off' politics ... He who strives to make politics a permanent source of income lives 'off' politics as a vocation." Today some people are living very well thanks to crony capitalism in Washington.

Politicians have made politics a business. They are increasingly entrepreneurs who use their power, access, and privileged information to generate wealth. And at the same time well-connected financiers and corporate leaders have made a business of politics. They meet together in the nation's capital to form a political caste.

How is it that politicians manage to enter office with relatively meager resources and often retire rich? It's certainly not by clipping coupons or a hefty paycheck. Politicians learned long ago that they could not pay themselves extravagant salaries. People would simply not tolerate it. Back in the spring of 1816, Congress passed a compensation bill that roughly doubled its members' pay. The result? A populist revolt. John Randolph of Roanoke, a Virginia congressman, likened the public's reaction to "the great Leviathan rousing into action." There was universal outrage. As a result,
more than half
the members of the House of Representatives declined to stand for reelection, and only 15 of the 81 who voted for the raise and who did run for reelection managed to keep their seats. Three statesâOhio, Delaware, and Vermontâelected entirely new congressional delegations. Henry Clay managed to retain his seat only after apologizing for voting in favor of the bill and promising he would never do such a thing again. When the new Congress sat, it quickly repealed the act.
3

Ever since 1816 a large pay raise has been out of the question. In 2011, rank-and-file members of the House and Senate earned salaries of $175,000.
4
If you include their benefits, the pay is more like $285,000 a year, which means they made approximately 3.4 times more than the average full-time worker in America, and twice what private sector workers with master's degrees earn. That salary makes them the second-highest-paid legislators in the worldâJapan is number one. (Luckily for our legislators, their contracts don't include pay based on performance standards.)
5
It's a respectable paycheck, but hardly the kind of money that leads to millions of dollars in savings, especially for men and women who maintain a Washington residence in addition to a house or apartment in their home state.

Crony capitalism unites these politicians with a certain class of businessmen who act as political entrepreneurs. They make their money from government subsidies, guaranteed loans, grants, and set-asides. They seek to steer the ship of state into profitable seas. Twenty-first-century privateers, they pursue wealth through political pull rather than by producing new products or services. In addition to these political entrepreneurs, big investors turn to lobbying and insider information from their sponsored politicians to make their investment decisions. And business is very good.

Political contacts, inside information, financial connections, and influence are increasingly replacing open competition. Hard work and innovation should be driving the American economy, but in Washington, crony connections have thrown these stable economic helmsmen overboard. Under crony capitalism, access to government officials who can dole out grants, special tax breaks, and subsidies is an alternative path to wealth.

So how does it work?

In his novel
The Reivers,
William Faulkner describes an entrepreneurial scoundrel who uses his mules and plow to make a boggy road even less passable. When the main character's car inevitably gets stuck there, the scoundrel shows up with a mule and offers to pull the car outâfor two dollars, a hefty price in 1905. Shift the scene to Washington, and this form of extortion becomes a much bigger profit opportunity. And it's the political class that muddies the road before charging to pull us out.

The new crony capitalists use several kinds of mud. They obtain access to initial public offerings on the stock market that can often be lucrative. They make their investment decisions and trade stock based on what is happening behind closed doors in Washington. This might entail buying or selling stock based on what they know to be going on, or they might "prime the pump," trading stocks based on legislation they have introduced.

Politicians are often extraordinarily good investorsâtoo good to be true. They may not have figured out how to help our economy prosper, but the Permanent Political Class is itself prosperous to a degree that should make us all suspicious. One study used a statistical estimator to determine that members of Congress were "accumulating wealth about 50% faster than expected" compared with other Americans.
6
According to the Center for Responsive Politics in Washington, members saw their net worth soar, on average, an astonishing 84% between 2004 and 2006.
7
(Other Americans didn't do quite so well, averaging about a 20% jump in the same period.)
8
And when times turned lean, in 2009, with the rest of the country mired in recession, members of Congress nonetheless saw their net worth increase by 6%, while the average American's net worth plunged by 22%.
9
Reuters even ran a story on the subject, titled "Get Elected to Congress and Get Rich."
10

A study in the
Journal of Financial and Quantitative Analysis
found that U.S. senators may have missed their calling: they should all be running hedge funds. How else to explain these results, based on 4,000 stock trades by senators:

When the same team looked at 16,000 trades by members of the House of Representatives, they found similar if less spectacular results. House members beat the market by 6% a year, almost as much as what corporate insiders achieve when trading their own stock.
12
(It is unclear why senators are better investors than are representatives. Perhaps it is because they have relatively more power and therefore greater access to market-moving information.)

Another study, by scholars at MIT and Yale, looked at a shorter period of time, from 2004 to 2008, and found that while many individual legislators do not beat the market, they do extremely well with stock in companies with which they are "politically connected." They beat the market by almost 5% a year. As the researchers put it, "Members of Congress seem to benefit as investors from knowledge of companies to which they are politically connected (and particularly those headquartered in their districts), and they appear to take advantage of this knowledge by investing disproportionately in those companies."
13