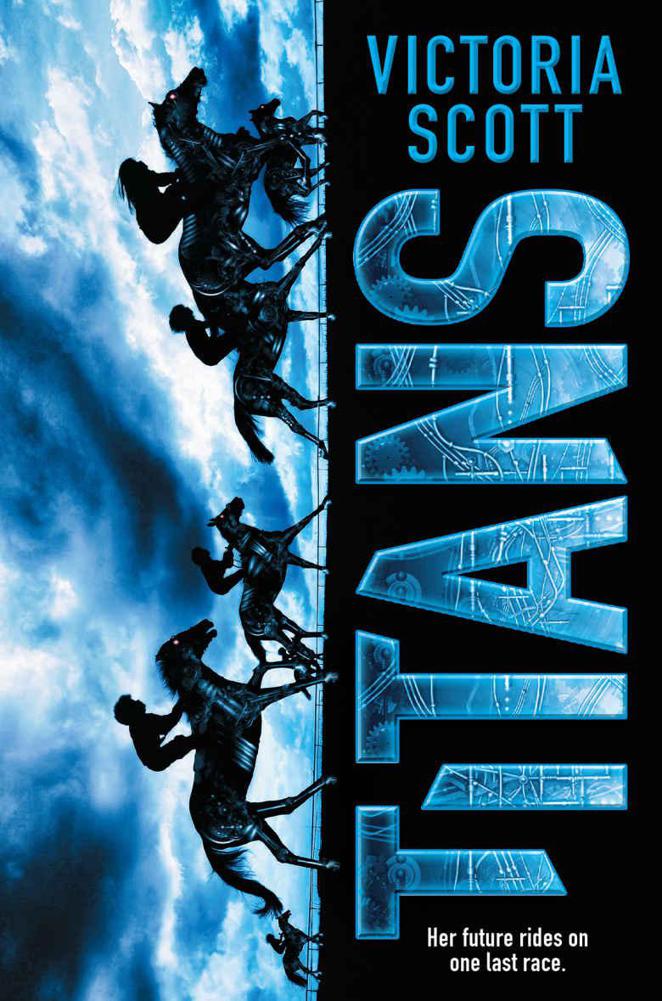 Whatever you decide to do in this big, blue world,

your mama will bet on you to win.

Tonight, the Titans will run.

I can see their eyes glowing red from my hard-won place outside the fence. Grown men jostle me from both sides, sloshing pints of beer, hollering over one another as they place last-minute bets. The moon dips low in the sky, lured by grumbled curses and bare-knuckle fights and cigarettes pinched between dirtied fingertips.

My parents don’t know I’m here. I snuck out my bedroom window with Magnolia an hour before midnight, an hour before the race would begin. Last year, I watched the machines run on a local sports channel—one of the few my family could afford. The Gambini brothers should have been thrilled. The first year and already they had cameramen and a spot in homes across Detroit.

This time, though, I won’t watch from under my mother’s arm, her fingers working their way through my hair. I breathe in the pungent smell of sweat and urine, and press closer against the fence. Magnolia stands beside me, her sight set on the course. She takes my hand in hers and gives it a good squeeze. I squeeze right back, and narrow my gaze to the Titans.

From inside the starting gate, the steel horses stamp the dry earth and toss their heads. I can make out the jockeys’ colored jerseys and anxious hands as they work their Titans’ control panels. I know from reading online that they’re sending manual instructions to the horses’ control centers, setting speeds and calculating lean percentages and determining how close they’ll push their horses to the slay zone.

The horses are a mixture of the real things and race cars. That’s why I’ve studied both. There isn’t much to do in the suburbs of Detroit, especially when where you live is less suburb and more slum. As working conditions at my father’s plant worsened, and my parents began to argue, the horses were transported into the heart of the forest that nuzzled my house. A glittering promise of hope in the form of iron bolts and smooth steel.

The starting light in the center of the track flicks on, throwing red across the dirt. The Titans lose their ever-loving minds when they see that particular shade of cherry. They may not have
real
minds, or
real
thoughts, but like any other computer they have the potential for recognition and reaction. The jockeys toe their stirrups, lean forward in their black leather seats, and grip the handlebars as their horses thrash.

I see all of this through the bars of the starting gate.

And then the light changes colors.

It blinks yellow—on and off, on and off.

The crowd moves in, bodies flush against my back until my nose is pushed through the chain-link fence.

My heart thunders in my chest so that I can feel it in my throat. Magnolia tightens her hold on my hand.

The gates slide away. A gun fires.

And the Titans run.

They run and the world trembles beneath my feet. Steam puffs from their nostrils and their eyes cut a crimson path and their bodies clash against one another, steel on steel. As the Titans rumble past, a smile sweeps across my face. Watching them is like kissing a speeding train. Like dancing with a hurricane. The horses are terrifying and beautiful at once. They are mindless beasts, but under the stadium lights, their bodies moving down the track like ghosts, they are glorious.

It’s the same day I watch a grown man die.

It’s the first Monday of summer. There’s no Ms. Finchella with her chalky fingers and history papers. There are no Styrofoam trays with steak fingers and questionable gravy. And there’s definitely no gym class where kids are separated by the volleyball kneepads they don: florescent white for those who come from money, and murky gray for those who grab from the used pile.

Who needs those things when it’s finally summer? When the sky spreads out over our neighborhood with blueness so deep you could slurp it through a straw. I dig my hands into my pockets and tip my head back, open my mouth like maybe some of that blue will float down like snowflakes. Once my eyes are cast upward, I find myself counting those fluffy clouds, sorting them into categories based on size and shape, seeing mathematical calculations dance across their white bellies.

Of course, I see numbers everywhere—in the leaves, in the way the grass grows, even in the lines that cross my palms.

My feet carry me between two clapboard houses while my brain keeps sorting patterns, until a sharp rapping sound steals my attention. It’s Magnolia waving from inside her window. She slides the glass pane open and music blasts into the warm air like it’s relieved to escape her room.

“Whatcha want, Astrid?” she asks with a smirk.

She laughs. “Even so, it’s your lucky day, because I’m in the market for a little adventure.” She climbs through the window, knobby knees getting stuck in the frame before she yanks them out. My best friend wears black shorts and a black tank. She’s even got black sandals on her feet. You’d think she was allergic to color, but that’s not it at all.

“You like my new piece?” she asks when she rights herself.

I admire the orange headband in her long blond hair. Attached to it is an orange veil that lies backward, just begging for a breeze so it can flip forward and cover her heart-shaped face. Now the black makes sense. Magnolia claims people should dress to accommodate their accessories, not the other way around. And Magnolia’s favorite accessory of choice is one worn on the crown of her head.

“I made it this morning.” She nudges the band back. “Still need to sew on a line of sequins to the bottom.”

She grimaces. “What do you know?”

Magnolia’s white teeth flash behind red lipstick. It clashes with her orange headband, but I won’t tell her that. The only thing Magnolia likes better than her custom headpieces is her Revlon red lipstick, No. 22. “What do you want to do?”

“Yeah?” She’s already heading toward the street, our footsteps retracing the same path we’ve cut countless times before. “You think anyone will be out there this soon?”

We don’t have to mention the place by name to have this conversation. It’s why we spend so much of our summers in the woods past Candlewick Park—to catch a glimpse of them in the daylight, though most don’t ever make an appearance until nightfall. Just thinking about the Titans running at Cyclone Track gets my blood pumping.

I cringe at this question. Both our fathers lost their jobs at the electrical plant a couple of months ago. “Strategic restructuring,” the newspaper called the layoffs, which only made my father angrier. The company replaced the men with machines made in Taiwan, is the truth. I know because Dad went around the house in the weeks following his “restructuring” and searched for anything in our house made in Taiwan. A couple of my younger sister’s stuffed animals, our microwave, and one of my mother’s favorite hand shovels were among the culprits. He threw them all away, save the microwave. “It’s today,” I tell her.

“Oh, I thought it was last Friday.”

I step over the curb and into crisp leaves. “Rescheduled.”

Magnolia nods like this is something she expected. “Dad says he might apply there too if your dad likes the place and the monkey who interviews him.”

“No point in doing it before then,” I reply. But we both know Magnolia’s dad has probably already applied. Between the two old friends, they’ve marched their way into every plant and factory Detroit has to offer. Magnolia’s dad even took a class at the library on creating a resume. You’d think he’d discovered another planet, listening to him gloat over that manila-colored piece of paper.

Little good it did him.

Magnolia must notice the distant look on my face because she rubs my back. I smile with one side of my mouth and return the favor. It’s our ritual. Our
we’ll get through this
one-two dance. On some twisted level, it’s nice to know I’m not alone in this situation. That Magnolia and I are both waiting for things at our houses to implode. But it’s also twice as scary, because there’s a specific something Detroit factory workers do after they’ve exhausted their options.

My stomach twists, imagining my family packing their bags for another town, another house. I can’t do that again. I won’t survive the nights in grimy motels, or worse, the days huddled in our car while my dad hunts for jobs
elsewhere
.

It nearly broke my family the last time we lost our house. But this time would be even worse, because it would mean leaving Magnolia. Of course, she could leave first.

My mind spins as I skip from one potential solution to another. This is what I’ve done every day since Dad became unemployed: think through the ways I could help my family. Yes, my dad needs another gig. But at this point, we just need money. Enough so that if he lost another job in the future, we wouldn’t have to entertain worst-case scenarios. My landing a minimum wager could help, but the last time Mom came home with an application from a craft store, Dad shouted about respect and a man’s responsibility to support his family. My sisters and I watched the vein in his neck throb, making ourselves small at the table.