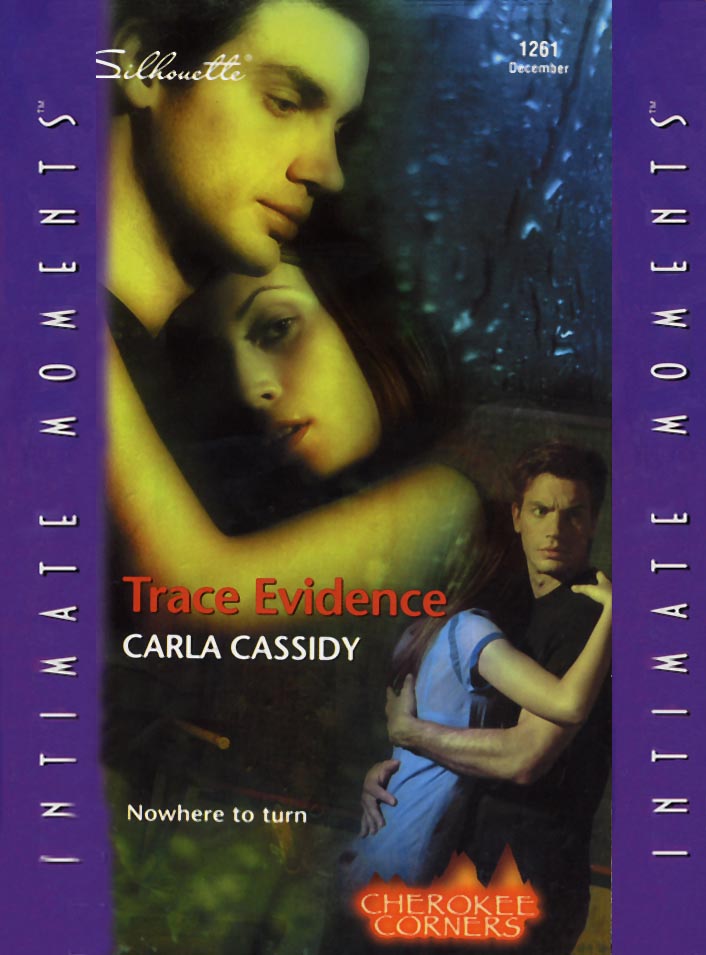 Clay James looked up from the microscope where he'd been studying a piece of fiber found on the latest murder victim of the killer who the local newspapers had dubbed the Shameless
Slasher
.

He frowned irritably at Glen Cleberg, the chief of police in the small
Oklahoma city
of Cherokee Corners. "I'm in the middle of something here. Whatever it is, can't you get somebody else to take care of it? I'm trying to identify a fiber found on Sam
McClane's
body."

He was certain that would make Glen leave the small police lab and him alone. The chief had been chewing on his butt to find something, anything that might clue them into the killer's identity before a third murder took place.

"As important as what you're doing is, I still need you on this other case."

Clay shut off the high-powered microscope, fighting against the foul mood that seemed to grip him tighter and stronger minute by minute, day by day. "What other case?"

"A break-in at the high school."

"Since when do we process something like that?" Clay interrupted impatiently. He had a hell of a lot more important things to deal with, like unsolved murders and a missing mother.

A stab of pain ripped through him as he thought of his mother, missing now for just over a month with few clues to follow to discover her whereabouts or if she were still alive or dead.

"Since the classroom that was broken into belongs to Tamara Greystone," Glen replied.

Tamara Greystone, local artist, teacher and Cherokee Corners' claim to fame. The fact that she was Native American, like Clay himself, and a close friend of the mayor's family was about all Clay knew about the woman.

"Clay, it's already after seven, past time for you to knock off for the day. If you'd just go by the school and check things out, you'll keep the mayor off my ass. He'll be happy to know I have my top man on the job."

Fighting a weary sigh, Clay nodded and stored away the specimen he'd been studying. Maybe some time away from the lab would give him a new perspective.

For the past two weeks he'd been putting in fourteen-hour days, studying, analyzing and cataloging trace evidence from the two murder scenes. That didn't count the time he was putting in on his mother's case. A little break away from the lab and intense work might be good for him.

"I'm on my way," he told his boss, who grunted and disappeared from the lab door.

Within fifteen minutes Clay was in his van and headed toward the high school on the outskirts of town. The July sun was still hot and he could almost taste the dust in the air, stirred up by a faint evening breeze.

He flipped the air conditioner in the van on high and tried to empty his head of thought. But that process had been next to impossible since the night almost six weeks ago when somebody had come into his parents' house and nearly killed his father, Thomas, with a blow to the back of his head.

Clay's mother, Rita Birdsong James, had been nowhere to be found. A suitcase had been missing along with some of her clothes and personal toiletries. The official speculation had been that Thomas and Rita had had one of their legendary fights and this time things had spiraled way out of control. The authorities believed Rita had hit her husband, then panicked and ran.

The James siblings had known that was impossible. As much as their mother, a beautiful, petite Cherokee woman, and their father, a big, brawny Irishman had fussed and yelled, screamed and cursed each other, it was merely part of their chemistry.

Rita and Thomas James had loved each other as passionately as they'd fought with one another. There was no way one could harm the other.

If that wasn't enough to fill his mind, there were the two murders to stew about. Greg Maxwell and Sam McClane had both been stabbed to death and left naked. Greg's body had been found in front of the public library and Sam had been left behind the post office.

They had been vicious killings, filled with rage and there had been little left on and around the bodies to aid Clay and the other crime-scene investigators in finding clues to the killer.

He felt as if in both cases he was fighting the ticking hand of a time bomb. If they didn't find his mother in time, she would probably eventually be found dead. And if he didn't find who the serial killer was, there was going to be more bodies.

Ticking time bombs, that's what he had on his hands and nothing was falling into place as it should. He tightened his hands on the steering wheel in frustration.

As the high school came into view, all thoughts of his mother and the serial killer fled from his mind. Two patrol cars were already in the parking lot and Clay shook his head as he pulled up and parked next to one of them.

Apparently it paid to be friends with the mayor. He could never remember a break-in anywhere that had warranted two cop cars and a crime-scene investigator … not in this small town.

Tamara Greystone must have pulled a handful of strings to get this kind of response. She was a big fish in a little pond here and he had a feeling she was probably one of those self-important divas in the art world.

He got out of his van and grabbed the metal suitcase that sometimes felt like an extension of his body. His irritation level had just ratcheted up to a dangerous degree.

The Cherokee Corners High School was a two-story brick building, with wide front steps that led up to the front door.

At the top of the stairs, Burt Creighton stood next to the door, looking bored and out of place in his khaki police uniform. He greeted Clay with a wry grin. "I joined the police department looking for danger and excitement. What do I get? An assignment to stand on the high school steps in the dying heat of the day."

"Why are you stationed here? Summer school has been over for several hours."

Burt shrugged. "Apparently Ms. Greystone teaches an adult education class at seven on Tuesday and Thursday nights. The class members have been arriving and I've been getting each person's name and address before sending them back home."

Clay shifted his kit from one hand to the other. "Seems like a lot of trouble for a classroom break-in. Who's inside?"

"Ed Rogers. He's guarding the classroom door, making sure nobody goes in until after you're finished in there."

Clay nodded and entered the building. He was instantly assailed by scents of the distant past … the smell of chalk and teenage sweat, of industrial floor polish and bathroom deodorizer.

He took the stairs to the second floor two at a time, a new irritation growing inside with each step he took. This was ridiculous, to be called here to process what was probably a simple case of classroom vandalism by some disgruntled student.

Ed Rogers greeted him at the top of the stairs. He motioned down the hallway. "Room 230 is on the left. Ms. Greystone is in room 231 across the hall. I wrote up a report, but I doubt we'll ever find out who did this unless some tough guy decides to brag."

Clay nodded. He'd already come to that conclusion. Still, he had a job to do. He headed down the hall, his heels silent against the polished tile floor.

Although he would have preferred to go directly to work, he turned into classroom 231 first. She stood, facing the doorway as if she'd heard his silent approach.

His first impression of her was one of grace and delicate beauty. She wore a traditional calico Cherokee tear dress. The dress had three quarter length sleeves and fell to her calves. It was sky blue with red-diamond-shaped accents around the yoke.

Her long hair was coiled in a careless knot at the nape of her neck, but it was her eyes that captured his attention more than anything. Large and more gray than black, they radiated kindness and peace. She certainly didn't look like an arrogant, artist diva.

"You must be Officer James." She took a step toward him and held out her hand. "I'm Tamara Greystone."

"Nice to meet you," he said as he gave her slender hand a quick shake, then released it. "I understand there's been a break-in into your classroom. What can you tell me about it?"

Clay liked to get as much information as he could before he actually processed a scene. He never knew what tidbit of information a victim might tell him that would reveal a clue to what he saw and discerned from the crime scene itself. He gestured her to a nearby student chair.

Once she was seated, he took the chair next to hers and withdrew a pad and pen from his pocket. Even with the distance between them, he could smell her. The scent was earthy and mysterious. It surprised him. He couldn't remember the last time he'd noticed the scent of a woman.

"There really isn't much I can tell you," she said. "I left the school this afternoon just after four and went home. The classroom was fine at that time. I returned this evening just after six and found the room had been destroyed."

"Was anyone here when you left at four?" He kept his gaze focused on his pad.

"I think I was the last one out. I usually am. We have three periods of classes for summer school. Math is at ten, English is at
and my class is at two." She offered him a smile that curved the corners of her full lips.

"What about the cleaning crew?" He looked back down at his pad, finding her smile far too appealing. What was wrong with him? First her smell, then her smile. For some reason he was finding her very distracting.

"The cleaning crew consists of Vernon Colby. He doesn't come in until about nine and works through the night. I'm not sure what his schedule is during the summer months."

"
Vernon
Colby? I didn't know he was still alive." He'd been cleaning the high school when Clay had gone to classes here, and Clay had thought him ancient then.

"Have you had a fight with any of the students? Flunked anyone who might have a temper?" he continued with the questions.

"No. Nothing like that." She shook her head, making tendrils of her dark hair come loose. "Well, technically most of the summer school students are in the class because they've flunked a class or need an additional credit to graduate."

He wondered if those tendrils would feel like silk between his fingers. Clay put his pad and pen away, recognizing that whatever other information he needed would probably be in the official report Ed had written up.

The Wife's Tale by Lori Lansens
Unfinished Business by Karyn Langhorne
Heart of Danger by Lisa Marie Rice
Trick - A Stepbrother Romance by Daire, Caitlin
Silver & Black by Tyler May
The Secret Ways of Perfume by Cristina Caboni
Falling For The Lawyer by Anna Clifton
The Rock by Chris Ryan
Involuntary Witness by Gianrico Carofiglio
The Program by Suzanne Young