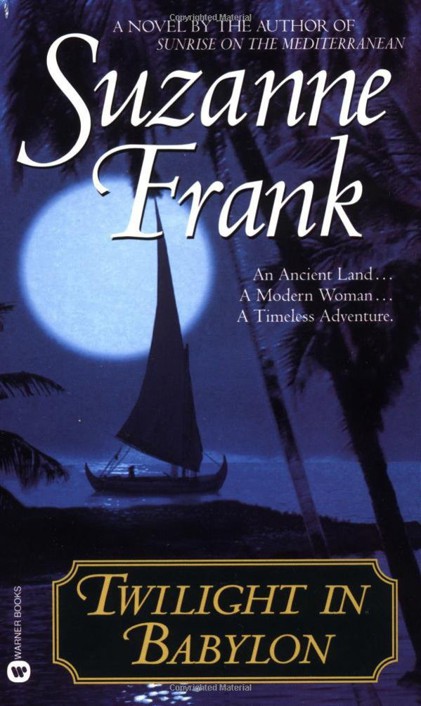 with everlasting gratitude and abiding affection

Before time was a line, it was a circle.

Before the divine was male, she was female.

Before Babylon, was Ur.

Part One
The Fire

Cheftu could see smoke billowing upward from the city wall. A bad day for a fire; last night’s rain would cause the limestone to crack and explode as the heat expanded it. There was no way to avoid that danger; in Jerusalem all the houses were made of limestone.

His
house even, was made of limestone.

The plume of smoke was gray against the spring-afternoon sky. It seemed to stab at the breast of heaven from the outer wall of the city. The fire must be on the outer wall.

His
home was on the outer wall.

Cheftu hastened his steps. He should anyway; Chloe would be overjoyed they were leaving the city. Cheftu had just been made ambassador to Egypt. He climbed up to the highest point of his walk. From this position, he could see the fields. Everyone was out today, planting the terraced sides of the valley.

He wound around another corner as he walked down to his house.

“Is anyone inside?” the voices of concerned neighbors echoed out to him.

“He works for the king. She’s usually here. Just a wife, you know. Barren, poor thing.”

He
worked for the king;
Chloe
was usually at home. His wife—barren.

The wooden door was black with smoke.

His
wooden door was black with smoke.

“Chloe!” he shouted. Cheftu covered his face, then kicked the door open. The heat seared through his sandal. “Bring water,” he yelled at the two old women. He ran inside.

He was lost in the gray heat; where was the kitchen? The sleeping platform? “Chloe?” he shouted. “Chloe!” Wind funneled from the back window through the hallway, and fueled the fire. Cheftu dropped to his hands and knees and felt around for her. Limestone popped, and the fire’s roar became stronger. Heat singed his skin. He smelled burning hair. “Chloe,” he coughed out.

He shook her; her skin was rippled and blistered. Black smoke unfurled through the window. Fire crackled behind him. He dragged Chloe’s body over his shoulder and back, then ran for the window, hunched over and coughing. He threw her out onto the narrow walkway, then clambered after her.

His neighbors sluiced down their homes.

Cheftu coughed, gasped for air, and spat black phlegm on the white stone. He turned to look at Chloe. His physician’s glance was quick and conclusive: burns to 70 percent of her body. A head wound, sticky with blood, staining the stone with red.

He wrapped the remains of his kilt around her head, but it didn’t change the facts. She would die, very soon.

Her chest fell in labored breaths. There was no part of her untouched by fire, no inch not black and oozing, burned and bloody.

The first block of limestone exploded, sending shards flying into the air. Cheftu shielded Chloe’s body as he pulled her around a ledge. She was beyond his help. Beyond all but the Almighty’s assistance. He looked up. A beautiful day; how could this be the day that Chloe would die?

Above him the sun shone golden on the walled city of Jerusalem, this spring equinox, this twenty-third of March. The designated temple grounds with their caverns of—

“There is one thing,
chérie,
” he whispered to his unconscious bride. “One way to save you, if God shows His mercy.” He gathered her in his arms and ran to the edge of the outer wall, then up the walkway, up the hill, up the plateau, ever leading up. To God.

Fabric walls shielded the space, and a gold-encrusted tabernacle graced the center of the flat-topped hill. Priests must be close by, but Cheftu knew the grounds better than they. A wooden trapdoor concealed an entrance to the tunnels beneath the Temple Mount, but Cheftu found it. Opened it and stepped down inside with Chloe.

It slammed shut above him.

Sealing him inside the catacombs.

Pain stabbed at his body, but he ignored it. Engorged blisters on his arms and legs, what felt like deafness in the cool silence of this cavern, were nothing to him. “It’s been so long since we’ve been here,
chérie,
” he said to her. Years since they had chosen to stay in this place, to make Jerusalem home. A mistake, he knew now. Cheftu swallowed painfully. Thank God she still breathed. Raspy, but alive.

He adjusted her head on his shoulder to straighten her neck. Cheftu leaned against a smooth-carved wall, waiting for his eyes to adjust to the night all around him. “I don’t remember where the chamber is,” he said. He began to discern the shadows of archways and passages. “But we can find it.”

For hours he walked, looking into every room, following the warren of walkways, ending back on himself again and again. The wound on her head had scabbed over, but all the other wounds had gotten worse. He’d never felt so helpless, so powerless. It was divine will, what happened next.

She hadn’t murmured; it hurt him to speak. Blinded by the sweat of his efforts, he sagged against the wall.
“Bon Dieu,”
he whispered.

When he opened his eyes later, the halls were filled with a faint blue glow. It bounced off the limestone walls until the whole space looked as though it were submerged in tropical, paradisical waters.

Cheftu staggered to his feet and picked up Chloe. Heart pounding, he searched for the source of light. “We found it,
chérie.
”

The archway glowed, a familiar fire. Safe. A healing flame. He laid Chloe’s body beneath it. She still inhaled and exhaled, but barely.

“I know it is not the correct time,” he whispered to the One he believed listened. “You have set times and appointments in place, and abide by them.” He looked into the face of his beloved wife. She must have hit her head, fallen, and somehow started the fire. With her as its fodder. A terrible accident; a slap from the hand of fate.

“I don’t ask special compensation because I think I am a good man. I ask because I know you are a good God. You love this woman far more than I, in mortal flesh, can.” He looked at her body. Ruined. “She still has so much to give. Let her live, let her find purpose.” His voice broke. “Let her know matchless love.”

“Give her another chance. Give her life.”

The blue light of the chamber continued to flicker, glittering along the sides of the true Ark of the Covenant—hidden there to protect the people from its terrifying power—the curved ceilings of limestone, but there was no roar of wind, no mighty thundering voice. Cheftu spun when he heard the scamper of claws. A rat watched him inquisitively, upright on its hind legs, the reflection in its glassy eyes, blue.

Cheftu watched her, waited, his hand on her ravaged chest. It didn’t move. He closed his eyes, his head bowed. Almost of their own volition, his lips moved. “Thy will be done.”

It seemed his heart should stop also, but it plodded on for moments and minutes and quarters and halves and an hour. He remembered the first time he’d seen her, green eyes flashing with excitement and life. Chloe, named for the freshness of a green field. How vibrant she was, springtime every day. Even in the past years when sorrow had licked away at her until he feared there would be nothing left.

No child, no family, no career, no passion.

I’m so sorry,
he thought.
I lost focus. Each day your eyes were rimmed with red from weeping was a day I knew I had failed you. I couldn’t get you pregnant, I couldn’t get you a career, I couldn’t get you to be happy. Then I stopped trying. Forgive me. I wasted our days.
Inside him, he felt a crack, a gap inside, and he knew that nothing mattered anymore. Chloe was gone; he would stay here until he was gone, too.

Her chest seemed to sink.

He opened his eyes.

Before him her body was melting into clay.

He reached to close her eyes, but a green fire sprang from them. Cheftu ducked away.

The wax and dust of her flesh and the fire of her soul danced and swirled in the blue light until all that was left of Chloe Bennett Kingsley Champollion was a scrap of bloodstained wool, a melted wedding band, and a shocked, charred, hopeful husband.

Part Two
The Star
Chapter One

The stargazer felt her breath catch in her breast as she watched the flocks in the night sky move. The star of Inana, which burned on the edge of the horizon, bright enough to be seen by day, glowed purple tonight. With trembling hands, the woman consulted the chart she’d been working on for years, now. “This isn’t supposed to happen,” she muttered to the stillness of the night.

Before her eyes, the moon took on a reddish hue.

She alone stood on this flat rooftop, overlooking the commonwealth of Ur. A few torches burned in their holders in the streets below, lighting the way for those too besotted with drink to see clearly, but it was so late that even the guards snored softly now.

Her chart was simple enough; as Shinar, the plain between the two rivers, was divided into four quadrants, so was the chart. Action in the night sky revealed which section of the plain had need of fear. She craned her neck back, then turned to the chart and counted: Sumer, in the south; Elam in the east; Amurru north; and Akkad, west.

She watched intently as the shadow on the moon passed. If it moved from west to east, it foretold bad luck for Sumer.

As the minutes ticked by, the moon’s redness shifted—from west to east.

She covered her mouth, so as not to strengthen the demons by voicing her thoughts. With a quick prayer to her personal god for fortitude, she turned to the other chart she was composing—a diagram of the flocks in the sky.

This was far more complicated, a division of 360 slivers that comprised the whole of the heavens. Each twelve slivers completed a house, and each of the houses had its champion symbol that rose and fell according to the seasons and the wishes of the gods.

“This isn’t usual either,” she muttered, peering at the tablet and leaning back to look into the sky.

The Hired Man of spring was visiting the house of the Goatfish of winter. Somehow, for a moment, the skies were pretending it was the season of rains and chill.

Killing Hitler by Roger Moorhouse
The Baker's Man by Jennifer Moorman
Conspiracy of Angels by Michelle Belanger
Local Girls : An Island Summer Novel (9781416564171) by O'connell, Jenny
City of Gold: Dubai and the Dream of Capitalism by Krane, Jim
Real Life RPG by Jackson Gray
Their Treasured Bride by Vanessa Vale
For3ver by M. Dauphin H. Q. Frost
Under the Stars by Rebecca A. Rogers
Disney Christmas Storybook Collection by Various