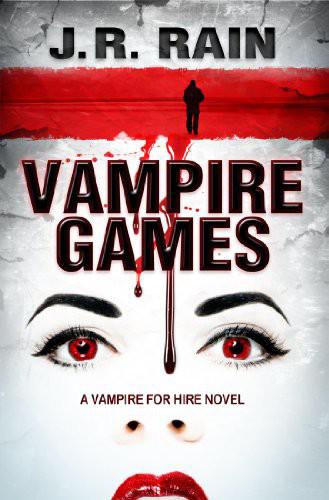 A Vampire for Hire Novel

Acclaim for the novels of J.R. Rain:

“
Be prepared to lose sleep!”

—
Piers Anthony
, international bestselling author of
On A Pale Horse

“
J.R. Rain delivers a blend of action and wit that always entertains. Quick with the one-liners, but his characters are fully fleshed out (even the undead ones) and you’ll come back again and again.
”

“
Dark Horse
is the best book I’ve read in a long time!”

“
Moon Dance
is a must read. If you like Janet Evanovich’s Stephanie Plum, bounty hunter, be prepared to love J.R. Rain’s Samantha Moon, vampire private investigator.”

“
Impossible to put down. J.R. Rain’s
Moon Dance
is a fabulous urban fantasy replete with multifarious and unusual characters, a perfectly synchronized plot, vibrant dialogue and sterling witticism all wrapped in a voice that is as beautiful as it is rich and vividly intense as it is relaxed.”

“
Is it possible to redefine two genres in one book? I don’t know, but J.R. Rain has left a lasting impression for the vampire and mystery genres.”

OTHER BOOKS BY J.R. RAIN

All the Way Back Home (coming soon)

BROTHERHOOD OF THE BLADE

Elvis Has Not Left the Building

You Ain’t Nothin’ But a Hound Dog (coming soon)

The Vampire With the Dragon Tattoo

The Vampire Who Played Dead

The Vampire in the Iron Mask (coming soon)

Aladdin and the Flying Dutchman

WITH SCOTT NICHOLSON AND H.T. NIGHT

Temple of the Jaguar

The Bleeder and Other Stories

Teeth and Other Stories

Vampire Nights and Other Stories

Vampires Rain and Other Stories

Cover design by Carl at
www.extendedimagery.com

This ebook is licensed for your personal enjoyment only. This ebook may not be re-sold or given away to other people. If you would like to share this book with another person, please purchase an additional copy for each person you share it with. If you’re reading this book and did not purchase it, or it was not purchased for your use only, then you should return to your favorite ebookstore and purchase your own copy. Thank you for respecting the hard work of this author.

To those who care for the animals of this world.

—
Diary of the Undead

“
There, on our favorite seat, the silver light of the moon struck a half-reclining figure, snowy white...something dark stood behind the seat where the white figure shone, and bent over it. What it was, whether man or beast, I could not tell.”

Judge Judy was letting this online con artist know what a scumbag he was—and I was loving every minute of it—when my doorbell rang. I nearly ignored it. Nearly. I mean, she was so very close to having this guy in tears.

Except I knew this was a client at the door. And clients paid the bills.

I reluctantly clicked off the show, set aside the Windex bottle and rag I had forgotten I was holding, and headed for the front door. As I did so, I instinctively reached up for the pair of Oakley wraparound sunglasses that were no longer there. My next conditioned movement was to check my arms and face and hands for sunscreen—which wasn’t there, either.

Wasn’t there, and wasn’t needed.

Two weeks ago, shortly after watching my first sunrise in seven years, I had reached down for the medallion, only to discover it was missing. Left behind had been a disc-shaped burn in my skin and the empty leather strap that had been holding the medallion.

Fang had thought my body
absorbed
the medallion. I had thought that sounded crazy as hell. Fang had reminded me that a skin-absorbing medallion was actually one of the least-craziest things to happen to me in seven years.

Now, two weeks later, there still remained a faint outline of the medallion on my upper chest, seared into my skin.

I’m such a weirdo,
I thought, and settled for reaching up and checking on my hair. Since mirrors were still out of the question, I had become a master at feeling my way through a good hair day. At least, I hoped they were good hair days.

As I stood before the front door, a lingering trepidation remained. After all, sunlight had been my enemy for so many years.

You can do this,
I thought.

And I did. I opened the front door wide as sunlight splashed in. Brilliant sunlight. Splashing over me, but my skin felt...nothing. I felt nothing, and that was the greatest feeling of all.

No searing pain. No gasping sounds. No stumbling around and covering my eyes. No shrinking like a monster from the light of the day.

Maybe. But now, not so weird.

Today, I was wearing torn jeans and a cute blouse, a sleeveless blouse, no less. Most importantly, I wasn’t wearing multiple layers of clothing or one of my epic sunhats. Or satellite dishes, as a client had once called them.

It was just me. And that felt good. Damned good.

The man standing in the doorway was smaller than I expected. He was wearing a Chicago Bulls tank top and basketball shorts and high-top sneakers. He looked like he might have just stepped off the courts or raided a Foot Locker. The detailed tattoos that ran up and down his arms—and even along his neck—seemed to tell a story about something, although I couldn’t puzzle it out at first blush.

He dipped his head in a way that I found adorable. The dip was part greeting, part submission, and partly to let me know that he came in peace. We shook hands and I led him to my office in the back of my house, passing Anthony’s empty room along the way. Well, not entirely empty. A pair of his white briefs sat in the middle of the floor, briefs that had seen better—and whiter—days. I reached in and quickly shut the door before my client got a good look at the mother of all skid marks.

Superman had Lex Luthor. Batman had the Joker. I had Anthony’s skid marks.

Once safe in my office, I showed Russell to one of my client chairs and took a seat behind my cluttered desk.

“
Jacky says you might be able to help me.”

“
Jacky say anything else?”

“
Only that you are a freak of nature.”

I grinned. “He’s always thought highly of me. What kind of help do you need?”

He looked at me. Straight in the eye. He held my gaze for a heartbeat or two, then said, “Somebody died accidentally...except I don’t think it was an accident.”

I nodded and did a quick psychic scan of the young man sitting before me. I sensed a heavy heart. Pain. Confusion. I sensed a lot of things. Most important, I did not sense that he was a killer.

Russell Baker was a boxer.

A damn good one, too, apparently. He was twenty-five, fought in the coveted welterweight division, had a record of 22-3, and was moving quickly up the rankings. There were whispers that he might fight Manny Pacquiao—or Floyd Mayweather, Jr. His management was presently negotiating a fight on HBO. He’d already fought around the world: Tokyo, Dubai, South Africa. He’d already beaten some of the top contenders in the world. Only the best remained. Only the champions remained. Russell Baker was on top of the boxing world and nothing could slow him down.

Colder Than Ice by Maggie Shayne
The Smartest Woman I Know by Beckerman, Ilene
España invertebrada by José Ortega y Gasset
Young and Revolting: The Continental Journals of Nick Twisp by C. D. Payne
The Bells of Bow by Gilda O'Neill
Guard My Heart by Aj Summer
Taking the Chequered Flag by Pam Harvey
The Apparition by Wayne Greenough
One Day Soon by A. Meredith Walters
The Numbered Account by Ann Bridge