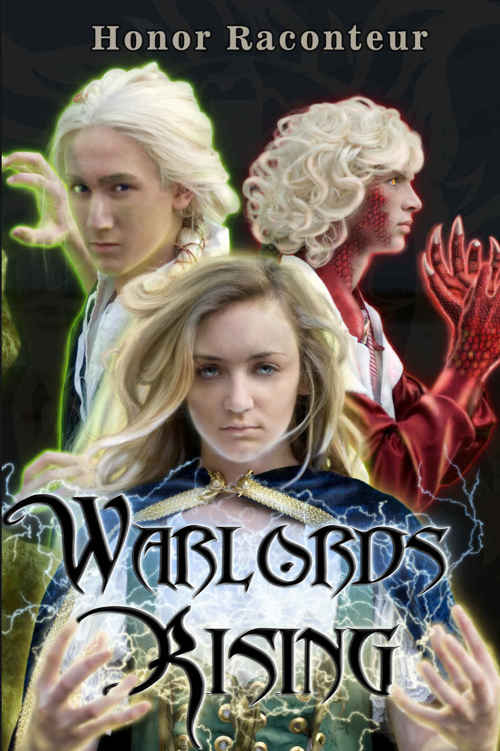 This is a work of fiction. Names, characters, places and
incidents either are the product of the author’s imagination or are used
fictitiously, and any resemblance to actual persons, living or dead, business
establishments, events or locales is entirely coincidental.

Book One of Warlords

A Raconteur House book/ published by arrangement with the
author

No part of this book may be reproduced, scanned, or
distributed in any printed or electronic form without permission. Please do not
participate in or encourage electronic piracy of copyrighted materials in
violation of the author’s rights.

Other books by Honor Raconteur
Published by Raconteur House

"Argue for your limitations, and sure enough they're
yours."

To all the fans that have been begging for Trev'nor and
Nolan's story: Your pleas have been answered! (Don't ask me how Becca snuck in,
though, I have no idea.)

To Rosie and Bryce, my Advent Experts, who reminded me of
things I had forgotten and double checked my facts. I'd look like an idiot
without you.

A very special thank you to Carlos d'Empaire who served as
my strategy consultant for this book. I was seriously stuck until we had our
Facebook chat session. Thank you!

It goes without saying that I wouldn't survive without my
editor, Katie, who puts up with me while I try to figure out book plots. A tip
of the hat to her young cousins: Alyssa, Kaleb, and Josh that served as our
models for this book. All of you are awesome. I won't ask myself what I'd do
without you. The answer is terrifying.

What You Need to Know About Advent if You’re New

Welcome to the world of The Advent Mage Cycle. There are
four original books, two spinoffs, and now this book. While reading the original
six first would fill in a lot of backstory, it’s not required for you to be
able to understand and enjoy
Warlords Rising
.

The first four books tell the story of the Advent Mage,
Rhebengarthen—Garth. He becomes the dean to a magical academy by the end of the
series. Becca, Trev’nor, and Nolan are his students, which is why you’ll see
them refer to him often.

Garth’s story incorporated several other characters, which
you’ll also see mentioned often. He had a full team of people that helped him
rescue magicians through most of the four books. There is Chatta, Xiaolang,
Shad, Aletha, Eagle, Shield, Hazard. Only some of them are mentioned or make an
appearance in this book. Riicshaden (Shad) is an incredible soldier that Garth
rescues from being frozen inside of a crystal in book 2,
Magus
. Shad
stays with him the rest of the series and even has his own book,
Lost Mage
.

Shad was the one in charge of going into southern Chahir
(where all of the mages are from) and rescuing a young Becca, 8 years old,
before she could be killed. He takes on the role of Guardian for her, but he’s
also her parent/older brother that raises her. Or I should say, he and Aletha
raise her. They both hold the position of Weapons Professor at Strae Academy,
working alongside Garth.

Throughout all of the books there is a magical race called
the Gardeners who keep making appearances. They are the caretakers of the world
and their main job is to keep the earth balanced. The whole world to them is a
garden that needs tending, and they do what they can to make sure it stays lush
and green. They are sometimes thwarted in this, and when that happens, they
awaken abilities in specific people to help aid them. These people are often
called Balancers. Garth was one, but his job ended at the fourth book. Becca is
a new Balancer because of her ability as a Weather Mage. She has spoken to a
Gardener personally and was entrusted with straightening out the world’s crazy
weather patterns. Her task will last her lifetime.

Also important for you to note is that throughout all six
books it is understood that Trev’nor and Nolan were special from the very
beginning. They are prodigies, with their mage powers awake at five years old,
and this is unheard of. Most mages awaken around 15. It was also implicated in
the series that there was a very important reason why both boys were awake at
such an early age and why they had to meet and become friends. I never gave an
answer as to why.
Warlords Rising
and its sequel is the answer.

Trev’nor was originally found and raised by a nomadic people
known as the Tonkowacon in Hain. He is Chahiran by birth, however, and Garth’s
many times removed cousin. I refer to this every so often. Nolan is Vonnolanen,
only prince and Heir to the Chahiran throne. He was supposed to stay at the
academy only until he was seventeen and then resume his royal duties at home.
So you could say that
Warlords Rising
is his last adventure.

Weather Mage Riicbeccaan had a plan.

As plans went, Becca thought it a pretty good one. The only
potential for things to go wrong lay in that she had yet to convince two
particular people to join in. She rather needed both of them for things to work
smoothly. That said, knowing them as she did, it was unlikely in the extreme
that she would get a ‘no.’ In fact, she rather doubted that she’d be able to
get the full plan out before getting an exuberant
‘yes!’

The trick of it was timing. She had to catch these two
alone, especially away from any well-meaning adults, or the whole plan would go
belly-up like a beached fish. She’d tried three times already today and had
been foiled every time.

So when the perfect opportunity landed in her lap, she
couldn’t be blamed for hesitating a long second and peering in all directions
suspiciously. Really, how often were Trev’nor and Nolan alone, in the side
garden, quietly reading? If she didn’t know better, she would think it was
going to storm soon, what with that odd behavior. Well, no, to be fair Nolan
liked to read. He was the more studious of the two. It was Trev’nor that
couldn’t seem to sit still for more than ten minutes before breaking out in
fidgets.

She approached cautiously, still keeping a weather eye out
for adults. Trev’nor was flat on his back, book held up above his head with
both hands, blond braid dangling over the edge of the bench and in Priya’s
hands. The little meuritta was having a field day braiding it in that
intricately complex manner the Tonkowacon preferred. He was not in his brown mage
robes, so she assumed he hadn’t been on any sort of job today, although why he
was reading so seriously was beyond her.

Nolan was on the ground, back propped up against the bench,
his meuritta curled up and in his lap dozing. He sported a small braid on one
side, proof that his meuritta had been braiding his hair as well. But the poor
soul didn’t have much to work with. Contrary to ‘mage style’ as people termed
it, Nolan hadn’t let his hair grow out long. In fact, it barely reached his
collarbones. He claimed hair that long was sweltering and he was willing to
sacrifice a little control if it meant not having to fight through waist-length
hair every morning. Becca privately agreed with him. Both had hair that tended
to curl, his more than hers, and she had a fight untangling hers every morning.
Enough to think about shaving her head bald.

She was a few feet away when Nolan’s head came up, eyes
blinking as he focused. “Hi, Becca.”

“Hi, Nolan.” She sank down onto her haunches next to him and
peered sideways. “What are you two so engrossed in?”

“Dragons,” Trev’nor answered, eyes not wavering from his
book.

Oh? Perfect. She clamped down on an evil cackle. “Really.
Funny, that’s what I was coming to talk to you about.”

Nolan peered at her intently. “You’re wearing that smile
again. The one that says you have a plan and we’re going to get in trouble.”

Oh boy were they ever. “I have an idea, and if it works out
right, we all three get dragons of our own.”

Trev’nor snapped upright so quickly she swore she heard
vertebrae crack. “And?” he prompted impatiently.

“Let me start at the beginning. I need to go into the
Khobunter-Libendorf area. There’s something very strange going on up there
weather-wise, and I can’t tell from here what’s going on. Given the political
conditions of both countries, Shad is dead set against me going.”

Nolan, more in tune with politics than either one of them,
grimaced. “Can’t say that I blame him. Libendorf is so unorganized it’s not
even sure what its political stance is from day to day, and Khobunter is worse.
There is no cohesive political stance. They’re too busy fighting each other to
figure it out.”

Becca lifted an illustrative finger. “But I need to get up
there. I think that the weather might be the reason why the land up that
direction is all desert. But if it’s not strictly that, I need someone to look
at the soil itself and tell me if it’s a contributing factor.”

Trev’nor pointed a finger at himself. “That’s where I come
in?”

“Exactly. I think three fully trained mages can waltz
through there and come out just fine, don’t you? Especially considering the
training that Shad put us through.” Her adoptive brother had made absolutely
certain that magic or no magic, all of his students could fight even the
toughest opponent. “And while we’re in that area, well, why not go talk to the
dragons?”

“It’s a sound idea and all,” Nolan agreed, scratching at the
chin with an idle finger. “But how do I fit in?”

Shrugging, Nolan didn’t disagree, and in fact smiled
slightly. “I suppose I’m also there to talk to them for all three of us,
negotiate our way into having dragon partners?”

“You do catch on quick.”

The Prince of Chahir took a full three seconds to think
about it before asking, “So. When do we leave and how do we get up there?”