Read Werewolves In The Kitchen Online

Werewolves In The Kitchen 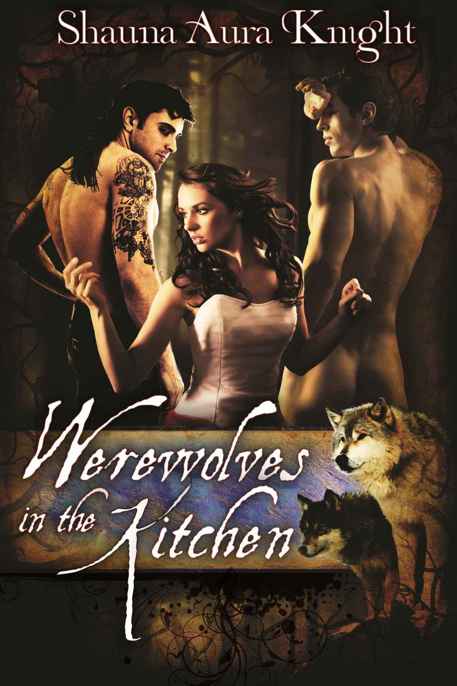 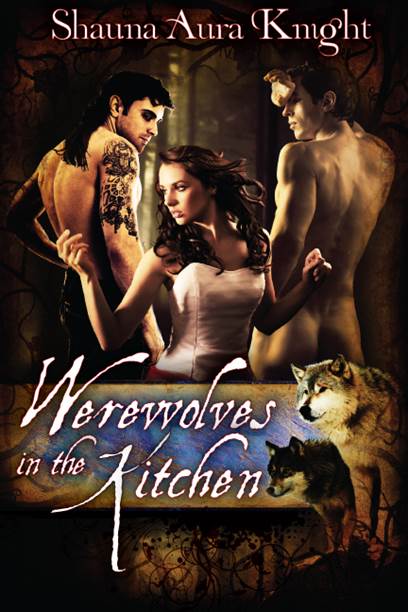 The scanning, uploading and distribution of this book via the Internet or via any other means without the permission of the publisher is illegal and punishable by law. Please purchase only authorized editions and do not participate in or encourage the electronic piracy of copyrighted materials. Your support of the author’s rights is appreciated. Permission is granted to make ONE backup copy for archival purposes.

This is a work of fiction. Names, characters, places, and incidents are either the product of the author’s imagination or are used fictitiously. Any resemblance to actual events, places, organizations, or persons, living or dead, is entirely coincidental.

This book may not be reproduced or used in whole or in part by any means existing without written permission from the publisher, Jupiter Gardens Press, Jupiter Gardens, LLC.

For more information to learn to more about this, or any other author’s work, please visit http://www.jupitergardenspress.com/

Werewolves In The Kitchen

Ellie dropped down onto a large rock and wiped her brown hair back. Sweat dripped down her arms. She looked up through the trees—it was nearly three.

Of course, weeks ago she’d never have been able to tell the time by the sun. She’d been a total city girl. Surveying her work, she drank from her nearly empty gallon of water. A few feet away was the growing pile of large flat stones she’d hauled from the creek. One of the SpiralStone retreat center staffers, Kerri, was building a flagstone area to beautify the gardens.

Sighing, Ellie hauled the rock closer to the pile. She was no artist. She was just a grunt here. After rotating her shoulder, Ellie crouched to haul another rock over. Though sore, she certainly felt more accomplished than when she was answering phones, typing memos, and taking orders.

When she’d been fired, she had panicked and immediately started job-hunting, but responses to her resume were scarce. When they found out her nearly completed degree was in physics, they’d frown and say, “You wouldn’t be happy in a job like this.”

Grappling with a rock that was almost heavier than she could lift, she growled and finally heaved it, dislodging it. Ellie wasn’t built like an Amazon like some of the women at SpiralStone. She had always thought she was tall at five-foot-eight until she’d moved here.

Panting, she waded out into the creek for yet another rock. Of course, this wasn’t the type of work she’d had in mind, but she was grateful to her friend for recommending she take a work-study sabbatical. She did grunt work, got free room and board, and got to attend workshops during events.

Somehow, she’d also overcome all her fears and ventured to an unknown place in the woods. She was grateful to have the time to think about how to return to school.

Soon Kerri would drive the tractor down here and haul the rocks to the main house. Ellie’s job was just to get big rocks to the shore. She was sure that Moira, the silver-haired woman who ran the retreat center, was disappointed that she didn’t have more artistic skill, and other staffers seemed to sigh when she needed to be taught how to use a screwdriver, but she’d been a quick study. She was surprised how low-tech some of this work was, but she enjoyed the monastic simplicity of it.

Ellie grimaced. Monastic was definitely the word. Sex wasn’t prohibited among people living at SpiralStone, though there were rules of conduct to prevent unethical behavior by staff and teachers. She appreciated that, given that she’d gotten fired for telling off her boss after he sexually harassed her. Being one of the few women in the physics program at school, she’d never had any lack of boyfriends. It just turned out that all the men she dated seemed as dysfunctional as her stepfather, just with more videogames. She’d thought it would be therapeutic to have some time away from men.

Of course, once she arrived, she had met the two sexiest men she’d ever seen working as cooks.

She’d assumed they were off limits, but it turned out that they were temporary staffers like her. It didn’t matter; neither of them would be interested in her. Sexy guys didn’t pursue her—physics geeks did. Actually, sometimes Kyle and Jake gave off the vibes of being a couple. She wasn’t sure since there were people of all genders and sexual preferences at the retreat center. She was slowly learning not to assume everyone was heterosexual.

Ellie had resigned herself to being sexually frustrated for the duration of her stay. She’d forcibly stopped following them around like a lost puppy, resisting the temptation to take shifts in the kitchen. At first she’d found herself looking for any excuse to hang out with them, and they put up with her.

They all talked about their various approaches to spirituality. She’d talk astrophysics and growing up in the city, while Kyle and Jake talked about cooking, growing up with in the homesteading lifestyle, and hand-carving furniture. She’d even told them how she’d had to quit school but hoped to go back soon.

However, she would find herself drifting, wondering what it would be like if Kyle was kissing her, if Jake were leaning against her…  The two men had to think she was a complete idiot with how tongue-tied she got. Ellie shivered, having a hormonal experience just thinking about them. When she’d started fantasizing about living with one or both of them, about the wedding, growing food on their land while she did physics research, and having their babies, she knew it was time to get some space.

That was just too weird; she’d never even thought about kids until them. “Must be some magical pheromone,” she muttered. That was the only explanation for her highly illogical fantasies.

Thus, she hauled rocks instead of washing dishes. If she had to watch blond Kyle’s tanned, tattooed arms working the frying pans, or dark-haired Jake tying his hair back in a ponytail and chopping up vegetables, she might lose her mind. Last time she’d washed pots and pans, just being near them had gotten her wet. Ellie kept blushing, thinking about all the dirty things she wanted both of them to do to her.

If only tall, sweet, sexy men with rock hard muscles were attracted to her like that, but they weren’t. She knew where she was on the social totem pole. She was average, plain. Ellie wasn’t going to make a fool of herself. They were nice to her, but they weren’t interested.

Hours later, her arms were shaking. It was just past dinnertime. She’d planned to skip the social congruence at dinner to catch a few extra hours of daylight, but she just couldn’t lift anything more. Even her pants seemed looser. All those teenage years of starving herself to fit in, and she’d just needed hard work to build muscle. Getting away from fast food had helped; Ellie had never felt this healthy.

Even if her libido had gone crazy.

She began trudging the half mile back to the house. The July humidity had her feeling as though she was swimming through the air, and she was dying for a shower. It was one of the conveniences of the retreat center that she enjoyed. The communal showers in the dormitory cabin still weirded her out a bit, but even that had gotten easier.

Nobody was around the house in the amber light of the setting sun. Often after dinner people went their own ways to work and catch the last of the light or to attend to their own evening activities.

Ravenous, Ellie warmed up a plate of steak and vegetables, leaning back against the counter to eat it right there.

Nearly finished, she heard Kyle and Jake coming down the hallway. “We should prep more lunch meat.”

“We can do it tomorrow,” Jake grumbled.

“Only if we get up at the crack—oh hi, Ellie.” They both stopped short at seeing her.

She managed to not choke on the steak. “Hi guys.”

Jake unfroze, donning an apron. “Did you like dinner?”

“Oh. Yes. Your steak is always delicious.” Yeah. She couldn’t even put proper words together when they were around. Her whole lower body clenched with wanting them. Ellie winced at how disgusting she must look, her collar-length hair plastered to her with sweat. She probably smelled.

“I’ll miss food like this when I’m back in the city.” Maybe she could escape and take a shower before she said something really stupid. Except she couldn’t quite make herself want to leave; she loved that warm glow she got around them.

“We could teach you.” Kyle set up the meat slicer.

“You keep telling me. Astrophysics research, experiments, yes. Cooking, not so much.”

Jake shrugged, and the play of muscles on his arms made her want to lick him. “Just let us know.” He picked up a cutting board and knives and looked up at her. “Are you all right? Drinking enough water?”

She laughed. “I drank a gallon.”

“Here,” Jake pulled a pitcher from one of the large refrigerators and poured her a glass.

Ellie blushed. “Thanks. You didn’t have to. You prepare food all day.”

“I don’t mind,” he murmured and began cutting.

She took a long drink of the lemonade. It
was
delicious.

“Did you get any blueberry pie?” Kyle asked as he sliced lunch meat.

“Oh, I don’t have any room left,” she protested.

“I do not,” she protested. “I just…it’s pointless to eat dessert and ruin all the benefits of the weight I’ve lost hauling things around.”

Kyle snorted. “I’ll never understand the quest to be skinny.”

“You wouldn’t,” she grumbled under her breath, though she saw Jake grin. She finished her lemonade, trying to not be obvious about watching both of their muscles work. Kyle was shorter than Jake but several inches taller than her, built more broadly in the shoulder and with heavier muscles. Jake was a little leaner, his skin was darker, and he had longer hair than hers or Kyle’s. Jake was quiet, he seemed to usually let Kyle take the lead.

Ellie shook her head. She  couldn’t just stand there and think about them bending her over right there on the counter. That led to thinking about them all living together in a homestead. The thought of being “Little Physicist on the Prairie” almost made her laugh aloud.

After moving to the sink, Ellie washed her plate. By the time she was done, Jake and Kyle were cleaning up.

Jake moved so quietly she didn’t hear him. Then he was next to her, washing his hands. Her heart thudded, and she struggled to catch her breath. If she wasn’t careful, she was going to launch herself right onto the man.

When Kyle came around the other side, she slipped away. With both of them next to her, she didn’t know if she’d be able to keep her hands off them, and there was no way she was going to embarrass herself like that.

“Well, you guys have a good night.” She bolted out the door.