Read Who Do I Lean On? Online

Who Do I Lean On? 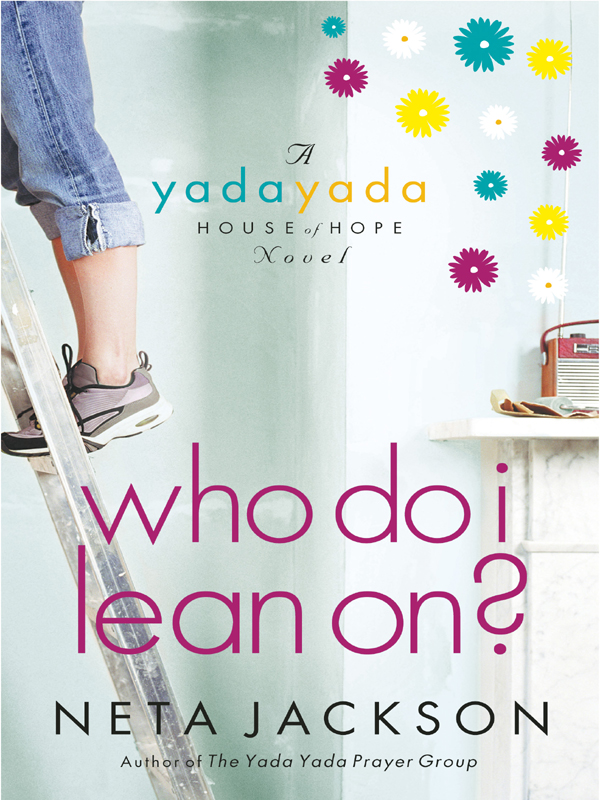 who do i lean on?

Other Novels by Neta Jackson

The Yada Yada House of Hope Series
Where Do I Go?
Who Do I Talk To?

who do i
lean on?

All rights reserved. No portion of this book may be reproduced, stored in a retrieval system, or transmitted in any form or by any meansâelectronic, mechanical, photocopy, recording or any otherâexcept for brief quotations in printed reviews, without the prior written permission of the publisher.

Thomas Nelson, Inc., titles may be purchased in bulk for educational, business, fund-raising, or sales promotional use. For information, e-mail [email protected]

Liz Curtis Higgs,
Bad Girls of the Bible
(Colorado Springs: Waterbrook, 1999). Title and author referred to within the text of this novel.

Publisher's Note: This novel is a work of fiction. Any references to real events, businesses, organizations, and locales are intended only to give the fiction a sense of reality and authenticity. Any resemblance to actual persons, living or dead, is entirely coincidental.

To Pam
My ministry partner
My “Avis,” my sistah, my friend
For putting up with me on all our travels
Speaking words of encouragement when I falter
Praying God's Word to keep our focus
Laughing about all our bloopers
Correcting me when I need it
And doing it all
In love

Philip Fairbanks watched stoically as the young man in the gold brocade vest and gold bow tie snapped cards out of the automatic shuffler and dealt two cards facedown in front of each player. But feeling his left eye beginning to twitch, he glanced around the poker room, already busy this early on a Friday afternoon. Wouldn't do to give the other players a clue that he was nervous. He took it all inâthe hum of activity at the other tables, the chandeliers glittering overhead, the clink of glasses as pretty young things in revealing black teddies brought drinks from the barâtrying to recapture the thrill he'd felt when he first came to the casino “just for fun” with his business partner. But today, the atmosphere seemed to be closing in on him. Like a cloying silk blanket generating static electricity, waiting to spark.

He turned back. The opening bid was already on the table. Two hundred each. Leaning forward, Philip casually picked up the two cards he'd been dealt.
Two tens
. A pair of dimes . . . He had to do better than that.

“There you are!” Two young women moving through the poker room of the Horseshoe Casino made a beeline toward them, stopping by two frat-types who helped make up Philip's table. “Crystal and I've been looking all over for you! What are you playing?”

“Texas Hold 'Em,” said one frat boy with a blond buzz cut. “The game I was telling you about. Can you wait? We've already started, but it goes fast.”

Philip put his cards facedown. He didn't like spectators. The girls were too close. Distracting. He could smell a faint whiff of gardenia perfume. Too heavy. He felt like telling the girls to beat it. No, he just had to focus. He raised an eyebrow at the middle-aged guy to the left of the dealer. Was the man going to fold, or . . . ?

The bald man frowned at his hand. “I'll raise it three hundred.” He pushed his chips forward. Philip shrugged as if bored, stacked the same number of chips, and pushed them into the pile. The two college kids each matched the first bid.

All right
. It was starting to look interesting. Two thousand on the table. He needed twice that to cover the business account before Henry Fenchel got the company's bank statement next week. Shouldn't be a problem. After all, the Fairbanks and Fenchel Commercial Development Firm was his brainchild. His money as much as Henry's. He'd just been off his game last weekendâ having his sons show up in Chicago for their grandmother's funeral had distracted him. And his new credit cards had only arrived two days ago, after he'd frozen his personal cards to keep his wife from using them. Why it had taken so long was beyond irritating.

Still, he wasn't too worried. If he had a few good games this weekend, he would make up the money he'd borrowed from the business account . . . plus gravy.

Philip watched, impassive, as the dealer burned the top card and then flipped the next three cards faceup on the table. The community cards, called the “flop.”
A jack . . . another ten . . . a six
. All different suits. But that ten would give him three of a kind. Philip studied the faces of the other three players. Nothing. Well, the bet would tell.

The big guy shook his head and passed.
Ah, good
. Now it was up to Philip to bet. He could simply check, see what the other two would do . . . no. He'd push it. Maybe they'd fold. Could he win with three of a kind? Not a great hand, but he'd won with less. Still, he shouldn't appear overconfident.

The twentysomething to his left pursed his lips. Philip wanted to smile but didn't. The kid had to match, raise, or fold. The girls standing behind them whispered something, gave Philip a flirty glance, and giggled. Philip wished they'd go away. Bad for concentration. Half a minute ticked by. The young man shrugged and matched the bid. So did his friend.

Back to the bald-headed guy. Sweat glistened on his forehead. Philip didn't think he'd raise it after passing the bet when he had a chance. But now it was either match or fold.
Don't sweat it, buddy. You've only got five hundred in the pot. Go ahead. Foldâ
The man pushed chips worth a matching two hundred into the pot.

Well, okay. The pot was now twenty-eight hundred. Maybe he'd make up the four thousand he owed Fairbanks and Fenchel on the first game. Sweet.

The dealer burned the top card, then flipped a single card faceup next to the original flop of three.
An eight of hearts
. That made two hearts on the tableâthe eight and the six. It didn't help Philip. His best hand was still only three of a kind. Maybe he should get out, take his losses, and try again. He'd only be out seven hundred. He'd still have the rest of the four thousand to play, and the night was young.

The older guy checked again. Philip tried to read him. The guy couldn't have a good hand, or he would've bet right out of the gate. He was leaving it to Philip to make the callâreacting rather than taking the initiative.
Chump
. Philip waited a good thirty seconds and then raised the pot another two hundred.

The whispering continued. Philip glared at the young women. They backed off, still whispering and laughing.

One of the college kids folded; the other matched Philip's bet. That made a pot of thirty-two hundred. Back to the bald guy. What would he do?

The man chewed his lip. Took out a handkerchief and mopped the back of his neck. Shaking his head, he matched the bid, moving his chips to the center of the table.

Was the fool bluffing? If so, he was taking it too far.

Last play. Philip watched as the dealer burned the top card of the deck and flipped the next card faceup next to the other four. The final card. Sometimes called “Fifth Street,” sometimes “the river.” Philip's heart pumped.
Another ten!
With two on the table and two in his hand, he could make
four
of a kind. Not bad . . . not bad at all!

The bald guy looked at his cards. Looked at the five community cards on the table. Each player could use any three from the table to make his five-card final hand. The only unknowns were the two cards each player was holding. Philip tried to picture what the guy could possibly use. The new ten made three heartsâten, eight, six. Maybe the guy had a pair, or even two . . . or an ace, hoping to take the pot with a single high card.

None of which would win over his four of a kind.

The guy suddenly moved all his chips into the center of the table.
Whatâ?
Those chips were worth another thousand! Philip recalculated. The guy probably had two hearts in his handâa flush, five cards in the same suit.

El libro del cementerio by Neil Gaiman
Perfect Victim by Megan Norris, Elizabeth Southall
Under the Same Sky by Joseph Kim
Murder at Monticello by Rita Mae Brown
Stealing Time by Glass, Leslie
Icicles Like Kindling by Sara Raasch
The Parting Glass by Emilie Richards
A Gathering Storm by Hore, Rachel
Lie Down with the Devil by Linda Barnes
Joan Wolf by The Guardian