Read Will You Won't You Want Me?: A Novel Online

Will You Won't You Want Me?: A Novel 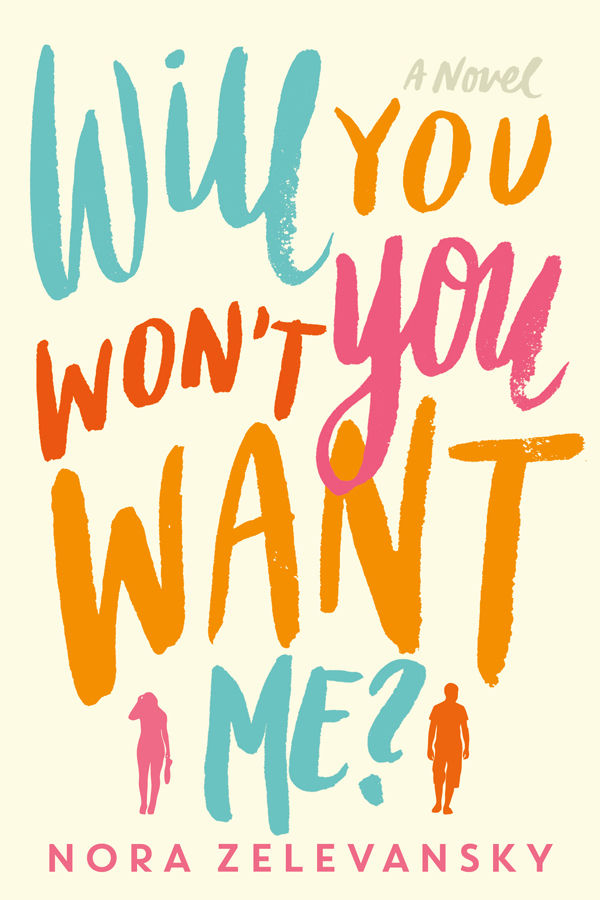 for andrew. who turns my tears to laughter, even on sunday nights

One morning, a girl awoke and discovered that she was two-dimensional. She was an illustration in a book.

She couldn’t budge from her page, suspended in motion, stepping off a sloped curb. She was ink sinking into tree pulp, bound by the glue and string of a longer tale.

It wasn’t until someone opened the book and saw her that she realized her own potential. There were versions of her on every page, waiting to move. She was part of a flip book that told her story.

Sometimes, when somebody flipped through the pages too quickly, her particular image was skipped and yet the story was still told. Other times, the reader’s thumb rested at the corner and, for a moment, her image became the only one.

Every day she waited to hear that sound:
flip, flip, flip
. It meant she was coming alive.

Then, one day, she heard
flump
instead.

The book had fallen into a bathtub filled with soapy water and the wet pages stuck together. The pictures blurred, but instead of disappearing, she became whole.

Marjorie Plum was the most popular girl in school, but it had been a decade since anyone cared.

Untangling earbuds, she rushed down the sidewalk past duos in bowler hats. Her heeled clogs trampled fallen cherry blossoms, surprised in trails midexodus to the gutter.

She did not notice a yellow cab squealing to a halt when she jaywalked or the driver shouting,
“Tu madre es una puta fea!”
She did not sense, as she hustled past an occupied stoop, the tension between a round-faced girl, who had professed romantic love, and her crush, who had in turn pronounced himself gay—
confused
at least.

Just hours before, the writer Nora Ephron had died of cancer. Somewhere along the campaign trail, the presumptive Republican presidential candidate, Governor Mitt Romney, and his advisers were brainstorming ways to avoid releasing tax returns. In Syria, Arab Spring had spiraled into civil war. England was enjoying Elizabeth II’s Diamond Jubilee but also a meteoric rise in cases of gonorrhea.

Across the Manhattan Bridge in Brooklyn, a young girl struggled with her creative-writing assignment over a dish of carrots and hummus at the kitchen table. In palm tree–lined Los Angeles, a misanthropic film buff packed for his flight back east.

Like every other, this day was at once important and insignificant in the scheme of things. Unaware of what was to come, Marjorie would likely have rated it forgettable.

Had she bothered to note the date, though, she might have realized that this warm June evening in 2012—when the first tendrils of summer heat snuck behind the bunched knees of pants, prompting the overdressed to adjust, readjust, and adjust again—was ten years to the day when her tenure as Queen Bee had ended at high school graduation.

Just eighteen years old then, while exiting the auditorium onto the sidewalk after the ceremony, Marjorie had mocked her maroon graduation cap and gown with a “too cool” performative snort. Afterward, she watched kvelling parents—clutching red rose and baby’s breath bouquets—shoot warning looks at younger offspring, who whined in hungry anticipation of special occasion brunches. Her chemistry teacher, Mr. Bender, checked his watch. Underclassmen, noting Marjorie’s arrival outside, gossiped and giggled more loudly, building the nerve to approach with yearbooks like autograph collectors.

And, suddenly, loss wheezed at the edge of Marjorie’s consciousness, something more than precollege jitters. Eyes welling, she paused to memorize the scene like a character turning off the proverbial lights on the finale of a stale sitcom.

That day, she
knew
life was about to change—for the worse.

Marjorie (“Madge” to friends) had mastered those teen years, traumatic for a disproportionate many. She loved the drama, the constant shuffling of romantic couples, firsts from cigarette smoking to second base. She felt no kinship with popular kids of teen movies who pumped pompoms and bullied future tech CEOs. Still, at high school’s end, she could sense her impending devolution into “Faded Prom Queen” (though she had skipped the taffeta-inspired event and headed straight to the after-party).

As her parents presented her with an engraved Tiffany necklace in congratulations at her own eggs Benedict brunch, she had promised herself she would not white knuckle that metaphorical tiara. But the descent into unimportance proved brutal nonetheless.

Now, at twenty-eight years old, as she ducked through reclaimed church doors into the new Lower East Side gastropub, DIRT, it occurred to her that suburban housewives did not have the monopoly on quiet desperation. Once, a night out had left her smelling of astringent liquor and Big Red gum, buzzing with nicotine and reverberating bass. She and cherry-lipped friends breezed past gargantuan bouncers who reeked of Cool Water cologne; they mooched off strange men’s VIP bottle service vodka, sat atop banquettes instead of
in
them, and smoked cigarettes under gaudy Gothic chandeliers, emerging purple and filthy into pale early mornings, carrying a destabilized vibration like a badge. These days, life was
civilized
and deadly predictable thanks to early nights, the disappearance of attached female friends, and $17 mixology cocktails with mint foam from rooftop herb gardens. DIRT—a high-ceilinged Manhattan rebuttal to Brooklyn’s farm-to-table nooks—was no exception, with its predictable knotted mahogany bar, white subway tiles, 1950s signage and chalkboard menu.

Marjorie nudged her way toward a lone empty barstool: “Excuse me, excuse me…” and then “
Excuse
me.” She eyed the crowd: Vera was late. Odd. The bartender was busy rustling his handlebar mustache in hipster mating ritual at a blonde in a vintage baby doll dress.

His inattention notwithstanding, Marjorie drew glances. The stray cherry blossom hitching a ride on her caboose was in part to blame. But she was also striking, tall and lean in her scoop-necked T-shirt, high-waisted miniskirt, and well-loved ankle boots, a favorite unostentatious but It bag slung across her chest. Her long auburn hair was swept into a sloppy topknot above high cheekbones, small pink lips, pale, sporadically freckled skin, and wide hazel eyes—accentuated with black liquid liner. Her resting expression could be mistaken for a frown, but the slightest smile revealed a rotated right-hand lateral incisor that upgraded her from pretty or cute to interesting, even beautiful. A small scar under her left eye was the result of three stitches after smashing headfirst into glass doors at her grandmother’s Palm Beach condo at the advanced age of fifteen (advanced for that sort of accident, at least).

Among those to clock Marjorie was a foppish man of roughly her age, leaning against the wall as if in his own living room. He paused midsentence, losing interest in the brunette before him. Then, adopting an expression of purpose, he straightened his skinny tie, retousled his perfectly mussed dirty blonde hair and excused himself, sidling up next to Marjorie—a free seat always appears for men of this kind—and performing a nonchalant, “You alone?”

Answering was the path of least resistance. “Aren’t we all?”

“So deep.” The corner of his mouth curled upward with pleasure at his own gall. She refused to return his smile, no matter how adorable he fancied himself. Which was very adorable indeed. “Well? No need to be rude,” he pressed.

Marjorie turned to face him. “
I’m
not rude. You’re rude.”

“Listen,
Madgesty,
it’s customary to say hello when you see someone you once French-kissed on Spider-Man sheets. Why the cold shoulder?”

It had been ages since Marjorie had last seen MacDonald O’Shea—named like a law firm by moneyed parents who had seen him mostly as a business venture—and longer since anyone had invoked her high school nickname.

The truth was she
had
seen and studiously ignored him when she walked in—along with two polished wooden booths of guys she’d both tailed and avoided during her teenage years, many of whom now stuffed wedding rings on meaty fingers and baseball caps on balding heads. She had felt too at sea, too atomically unstable, to engage them.

She gestured toward the button-nosed young woman he’d abandoned, who pretended not to stare after him. “You looked busy.”

“Never too busy for the one who got away.”

“One of ten to fifteen who
ran
away, actually.”

“See? Rude. Correct, but rude. Anyway, what’s a guy gotta do to get a hello already?”

Marjorie had to smile; Mac never changed. She leaned in to plant a peck on his straight-razor-shaven cheek, and, before she realized, he whipped around and kissed her square on the mouth. Electricity shot through Marjorie’s body; she chided herself, recoiling. To relish his attention was amateurish. Her resolve against his sleaze—unappealing on paper but nonetheless powerful—was a point of pride. “You’re impossible.”

“Most women say
irresistible.
But then you’ve always been strange.”

“Nothing a lobotomy wouldn’t cure. Or copious alcohol.”

“One strong drink coming up.”

“Make it two, if you succeed. And good luck getting the bartender’s attention.”

“Watch me.” She watched as he backed toward the end of the bar and, within moments, was distracted by a wannabe model in batik harem pants.

Mac’s confidence was not due to classic good looks. Of medium height, he maintained a narrow build with rigor. His face was intelligent, not handsome, thanks to a protruding chin and a too-fair complexion. But his birthright—a cocktail of charisma, entitlement, insatiable need, and absent ethics—made him a social giant. His chosen objects—men, women, children, even dogs—were made to feel like members of an elite club, out of which everyone else had the misfortune of being cast. Once they got a taste of his flirtation, they
needed
Mac’s Technicolor personality to subsume them, to fill the gaps where boredom and insecurity lay, to make them feel significant. And when he lost interest—and he
always
did—he left them feeling hollowed out, like they’d failed. Any Psych 101 novice could see that he craved approval after years of chasing his chilly family’s affection, which—in his darkest but clearest moments—he knew was only rumored to exist, like some emotional Bigfoot. But that fact did not dilute his power.

More Than He Can Handle by Cheris Hodges
The Promise in a Kiss by STEPHANIE LAURENS
Broken Dreams by Bill Dodd
Project Date by Perry, Kate
The Valley of Amazement by Amy Tan
Someone to Watch Over Me by Michelle Stimpson
It Started as a Joke (All the Presidents' Beds, #1) by Kit Helix
Skeleton Key by Jeff Laferney
Man in the Middle [Wolf Creek Pack 9] by Stormy Glenn
Night Flight by Antoine de Saint-Exupéry