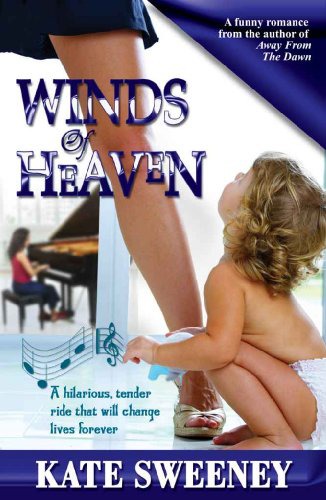 After the untimely death of a former lover, Casey
Bennet
receives a letter from Julie’s lawyer, begging Casey to help Julie’s partner, Liz Kennedy, and their adorable, yet precocious three-year old, Skye, who are now alone.

An avowed bachelorette, Casey has no idea what’s in store when she grudgingly agrees to help Liz, who, by the way, is also pregnant and due in four months.

Casey, Liz, and little Skye find themselves in for a hilarious, tender ride that will change their lives forever.

All rights reserved. No part of this book may be reproduced in printed or electronic form without permission. Please do not participate in or encourage piracy of copyrighted materials in violation of the author’s rights. Purchase only authorized editions.

This Trade Paperback Is Published By

This is a work of fiction. Names, characters, places, and incidents are the product of the author’s imagination or are used fictitiously, and any resemblance to actual persons, living or dead, businesses, companies, events, or locales is entirely coincidental.

The Trouble with Murder

Who’ll be Dead for Christmas

Away from the Dawn

To my niece and godchild, Hannah Rose, who was the inspiration for Skye in
Winds of Heaven
.

Hannah is now a beautiful young woman and teacher, but I will always think of
Hannie
as the feisty little kid with a wonderful sarcastic sense of humor—I have no idea where she got that…

As always, thanks to, Denise, for her insight and thoughtfulness.

To
Jule
and
Tena
, for taking the time to beta.

And finally, to my editor, Tara Young.

The dark, sterile corridor greeted Liz when the elevator doors opened. How many times in the past three months had she walked these halls? She passed the nurses’ station; the familiar faces greeted her with a sad smile. Liz had gotten to know all the nurses in the past few months. She smiled in kind as she made her way to the room for the last time. She swallowed the wave of nausea, and as she reached for the door, it opened and Elaine stepped out. Elaine Hanson was the head nurse on the oncology floor. She took a special interest in Liz, and Liz welcomed it; it had been a rough three months.

Elaine was an older woman, perhaps in her late fifties. She absently pushed a lock of graying dark hair off her forehead, then placed her hands on Liz’s shoulders. “You okay, honey?”

Liz nodded through the tears that suddenly sprang to her eyes. “I just wanted to be here when—”

Elaine pulled her into her arms. “You had no way of knowing Julie would go so quickly. It’s a blessing, Liz.”

Liz backed up and took a deep breath, wiping the tears from her cheeks. “I know.”

Again, Liz nodded; the numb detached feeling settled within her when she entered the room, which was dark, except for the small light over the bed that cast a soft illumination. Liz cocked her head as she approached the bed. Julie looked so peaceful, as if she were just sleeping. However, as she neared, Julie’s pale, cold appearance told her differently. She looked down at the lifeless form, which a short while ago was her partner in this life. Lightly placing one hand on her unborn child, Liz caressed the cold cheek of her companion.

“You’ll never get to see her, and for that I am sorry, Julie,” Liz whispered with tears streaming down her cheeks. “You’re not in pain anymore.”

Liz stared off into space, and for a brief moment, remembered a time when there wasn’t any pain, only laughter.

“What should we do today?” Liz asked as she cleared the morning dishes.

Julie struck a thoughtful pose as she opened the dishwasher. “Hmm. I don’t know. It’s a beautiful autumn day. I think we need a pumpkin.”

Liz shook her head and turned around. “We have one, you dope. And if you were home more often, you’d have seen it on the porch.”

Liz wiped her hand on the towel and leaned against the counter. “
We
did not. Skye and I went last Saturday when you were in San Diego.” She tried to keep the sarcasm out of her voice, but it was becoming a losing battle.

Julie seemed to sense the sarcasm. “Honey, it’s my job.”

“I know. I know. You’re a pilot. I understand, but you could have taken the shorter runs—”

“For less money,” Julie interjected with a frown.

“Which I have never cared about,” Liz countered evenly. She then took a deep breath.

“Look, this is the first time I’ve been home in weeks. Let’s not argue over this again.” Julie walked over to her and put her arms around her waist, pulling her close. “Let’s not go out,” she whispered against her lips.

Liz sighed and returned the kiss as she wrapped her arms around her shoulders. “You always get out of an argument with sex.” She sagged against the counter.

Julie smiled as she slowly unzipped Liz’s jeans. “I do not,” she grumbled playfully. “I just love the feel of you.” She slipped her hand inside. “Skye’s taking a nap, right?”

Liz closed her eyes and nodded as Julie pushed her jeans down her hips. She gasped when she felt her lover’s warm fingers dance through her.

Liz smiled sadly now as she remembered those happy memories that were all too infrequent. Julie was constantly working during their five-year relationship. She gave no time to see Skye growing and now…Liz placed her hand on her stomach and sighed.

“Goodbye, Julie,” she whispered. She bent down, kissed the cold cheek, and walked out of the hospital room.

Once outside, she put a hand to her mouth and let out a heart-wrenching sob. Elaine was at her side, guiding her to the waiting room. “You sit for a minute.”

“Thank you. You know, I’ve been preparing for this for six months. Julie and I got everything in order. But somehow...” She stopped and put a shaky hand to her forehead.

“You’ve been so strong through this whole ordeal, Liz,” Elaine said, trying to comfort her.

“I have to be. Poor little Skye doesn’t know what’s happening. She’s so young. I told her God was lonely and needed Julie more than we did. She doesn’t get it, and I’m almost glad she doesn’t. Julie’s job took her away a good deal of the time, and as much as I hated it, it probably made it easier on Skye.” Liz let out a heavy sigh before continuing. “I would have never agreed to this baby if I knew how sick Julie was. We just wanted a child of our own. Was that selfish?” She looked up at Elaine with pleading eyes.

“No, you two loved each other. Skye is a beautiful happy little girl. And this one,” she patted Liz’s stomach, “will be just as happy. It’s because of you and Julie. However, I have to be honest, it’s mostly you.”

“I know. Julie wanted children but didn’t want the responsibility. I remember begging her to switch shifts with the airlines just so she could be home more.” She sighed and put her head back.

Julie’s six-month battle with cancer took its toll; her death was almost a relief. Liz felt guilty thinking that, but she couldn’t help it. When they found out Julie had bone cancer, it spread quickly. She was in so much pain that it was unbearable to watch. “She isn’t in pain anymore.”

Both women sat for a moment in silence. The elevator doors opened, breaking Liz from her reverie. A young woman walked out, holding a blond curly-headed girl, who was squawking up a storm. The minute she saw Liz, she reached for her.

The woman set her down, and Skye rambled over to her, giggling all the way.

Liz laughed and threw her arms around
Syke
as the child tried to climb on her lap. “No. Here, sweetie, sit next to Mommy.” Liz looked up and smiled. “Did my little girl behave, Joanne?”

“Of course, as usual,” Joanne said. She locked gazes with Liz, who smiled sadly and shook her head. Tears sprang into Joanne’s eyes; she quickly wiped them away.

“Thanks for taking care of Skye, Joanne.”

“It was no problem. We had fun,” Joanne said, regaining her composure. She ruffled Skye’s hair. “Didn’t we, kiddo?”

Skye nodded. Liz put her arm around her daughter. “Did you, sweet pea?” Liz asked as she pushed her auburn hair away from her face.

Little blue eyes looked up, and the girl grinned. “Mmm-hmm. I have ice
cweem
.”

“And did you say thank you?” Liz asked and Skye nodded.

Liz stood with a groan and took Skye’s hand in hers and whispered, “C’mon, Skye, let’s go home.”

Liz lifted her and held her on her hip. “Pretty soon, Mommy won’t be able to lift you like this,” she said and kissed her head.

They all walked to the elevator in silence. Now what will happen? Liz thought. Their money depleted, she’d have to give up her part-time job when she had the baby. All at once, she hated Julie, hated her for dying, hated her for not being there as she should and taking care of the family she wanted. Liz took a deep quivering breath and held on to Skye.