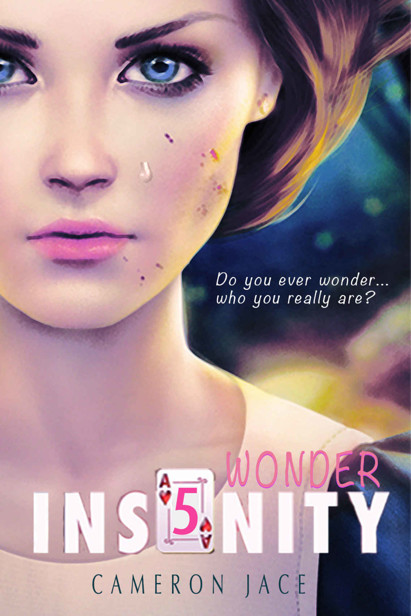 All rights are reserved. No part of this book may be used or reproduced in any manner whatsoever without written permission from the author.

Other Books by Cameron Jace

I Am Alive Series

Books in the Insanity Series

Greeje Wijnstok, Hannah Flood, Laura Guilbault & Sadie Muncy – among others –  for their dedication, friendship, & keen insights with the tiniest details of the story.

How to read this book:

Begin at the beginning

and go until you come to the end;

then wait for the next book.

For those who believe they’re neither their past or future,

but this very moment.

Mr. Tick and Mrs. Tock were dangling their feet, sipping tea and eating brownies on top of the Big Ben tower in London. Mr. Tick was tall, lanky, with a head that looked like a cantaloupe. He wore a long coat, but short enough at the bottom that his rainbow-colored socks showed from underneath. He didn’t wear boots, but sandals, which gave way to his big toes. Mr. Tick had three hairies on top of his head. He spent a significant time nourishing and combing them. He wondered whether to comb them to the left, to the right, or spike them up with gel. Maybe going freestyle was the next move.

But Mr. Tick’s most precious item was the golden watch that dangled from his pocket. A watch that Mrs. Tock liked to made fun of.

“That’s my job. I have no choice,” she said, leaning on her cane, the back of her short, stocky figure arching forward. “The Tick always arrives first, then the Tock follows. The rules of time since the beginning of time.”

“Complaining much?” Mr. Tick’s chin turned up and away from her. He was staring at the city of London buried in heavy rain, drinking raindrops from a teacup in his hand. “Blame it on the Gods of Wonderland. They’re who made us that way.”

“Sexist Gods,” Mrs. Tock said. “Why do women always come second in their calculations? I’d prefer to be a Tick, not a Tock. I’d have loved to always arrive sooner, not later.”

“Too
late
for that,” Mr. Tick mocked her. “Look at you. You’re old, short, stocky, and can barely walk with ease. I think being Mrs. Tock suits you fine.”

“Yeah?” She sneered, her white hair flapping to a breeze. “And you’re tall. Too tall. Bald. And thin. The characteristics of a loon.”

“We’re all loons in Wonderland,” he said, amusing himself. “Besides, I’m not bald. I have three hairies.”

This comeback irritated Mrs. Tock. So she hit him in the knees with her cane. Mr. Tick’s skinny frame collapsed to his knees. Immediately, she plucked out one of his hairies.

“Ouch, indeed.” She sneered again. “Now you only have two. Bother me further, and I’ll cut off your head like the Queen of Hearts does.”

“You can’t do that to me, vicious woman.” He slowly stood up, snatching the hairy back from her hand. He spat on it then plastered it back on his head. “I’m Mr. Tick. I work for Time itself. I can’t die.”

“Not if I kill you first. And you know what’s good about being Mrs. Tock? I’ll die
after
you, since I always come second.” She stuck out her tongue. “Which will give me the pleasure of watching you take your last breath.”

“All right.” He waved his watch in the air. “Just bloody calm down. Go play with one of your cards to kill time, lazy woman.”

“And you go sip your tasteless six o’clock tea like you do every day, monotonous man.”

“I hate you so much now.” He sighed. “You used to be fun when we were in Wonderland.”

“That’s because Wonderland
was
fun, enough that I overlooked your shortcomings, you tall and stupid Mr. Tick.”

“Ah, those days may never come back.” He sighed again. “Remember when were allowed to stop time?”

Now she glowered. “Oh, my. That was frabjous. I remember how we messed with the Hatter’s mind when every hour stayed six o’clock for six years, and he would go mad trying to change it.”

“I do. I do.” He chuckled. “I really miss those days. I wonder if the Real Alice will ever show up so we can go back to Wonderland.”

“I wonder.” Now she sighed, hugging his tall frame by the waist.

Emotions surged through Mr. Tick’s soul. He stared at the Big Ben. The famous clock was a few seconds late. Mr Tick cursed the human inaccuracy. “Look at what those humans did to Big Ben, Mrs. Tock.”

“I know, Mr. Tick. Horrible. Even I don’t arrive
that
late.”

“Tell you what.” Mr. Tick gripped her by the shoulders and lifted her up to look in her eyes. “How about we play, like in the old days.”

“Really? In this world?”

“A very mimsy idea, Mr. Tick. I was starting to get bored out of my mind.”

Mr. Tick put her back down then pulled out his pocket watch, fiddling with its hands. “
Clock. Clock. Clock. Tick. Tac. Tock.
” He started humming.

So did Mrs. Tock.

Slowly they watched London freeze into a dull and grey portrait of people, traffic, and amazing architecture caught under inanimate drops of rain, now hanging in midair.

Mr. Tick and Mrs. Tock couldn’t be happier. No one had the power to do this but them. After all, they were working for Mr Time himself, and they had been unhappily married since the beginning of… well…
time
itself.

Now that the time on Big Ben had frozen at six o’clock, Mr. Tick and Mrs. Tock descended to the streets. It was so much fun with everyone stuck in their place and position.

A man talking on the phone, his mouth left agape.

A woman strolling a shopping cart, still bent over it, one leg up behind her.

A speeding car stopped with an aura of its shadow stretching behind it, like in Road Runner cartoon.

“I’m enjoying this. Look at those people frozen, unaware of what’s happening to them. Do you want to slap a few people on the face?”

“Empty their pockets and leave them broke when they wake up?”

“You could lift me up so I poke their noses.”

“Oh,” Mrs. Tock said. “I think I know what you will consider fun enough.” She smirked.

“You nasty little short Tock.” His eyes widened. “You always know how to please me.”

Mrs. Tock’s cheeks reddened. She shrugged her shoulders and walked the streets. The first thing she did was push a car near the edge of the bridge, so when they brought time back the driver would have no time to veer it back, and would splash into the River Thames.

Mr. Tick caught the idea and started manipulating people’s positions. Now two strangers, man and woman, were kissing. Another two, one slapped the other. Then there was this businessman — Mr. Tick took his clothes off. Now he’d wake up naked in public.

On and on, they spent the next few minutes preparing the world for chaos. They even pulled a couple of news reporters from their desks and placed them ready with their microphones and cameras on the streets, so the news would go viral on the spot.

“Oh, fantastic!” Mrs. Tock knocked her cane on the ground.

“So eager to see the world in chaos.”

But right before Mr. Tick could bring back time, his phone buzzed. An old banana cell phone that hadn’t beeped since about fifteen years ago — who’d call time, anyways?

“It’s a message,” Mrs. Tock corrected him. “Why haven’t I received one too?”

Then her phone buzzed.

“You’re Mrs. Tock. You’re always late, that’s why.” Mr. Tick glanced at his phone and read the message. Mrs. Tock struggled with opening hers, as she wasn’t tech savvy.

“What does it say?” she asked.

“What kind of offer?”

“An offer from a Wonderland Monster.” Mr. Tick’s eyes met hers.

“Oh.” She considered this. “Well, we love chaos, but we’re not quite Wonderland Monsters.”

“That’s what I’ve been thinking. We don’t belong to either Black Chess or the Inklings. I think we should decline the offer.”

“Why would a Wonderland Monster think we’d accept that?”

“Because we’re bored. And honestly, as time, we’re known to be cruel.”

“And because it’s about Alice.”

“Did they find her?”

“Not sure yet, but they think we’re supposed to do something to her to confirm she is the Real Alice.”

“That’s not what the message says.”

“Hmm…” Mrs. Tock said. “Wouldn’t it be frabjous if Alice is alive. What else does the message say?”

“Of course we should do it.” She sneered all of a sudden. “I never thought so much fun was possible. But first…”

“I know,” Mr. Tick said, rubbing his watch. “Let’s first bring back time and watch this beautiful chaos in the streets of London.”

Hi, my name is Alice. Could be Mary Ann. Who knows? What matters is that I am a person who saves lives. I really exist.

So I am sitting in a Physics 202 class in Oxford University, trying to learn. Having gotten permission from Dr. Tom Truckle to attend classes, I’ve been coming to college for the last two weeks. If I’ve learned anything about studying in college, it’d be that learning sucks.

The professor is talking gibberish about the scientific possibility of time traveling. He mentions Einstein a couple of times. I am about to raise a hand and tell him about the Einstein Blackboard in Oxford University, the one I used to travel back to Wonderland.

But who’d believe me if I told the story? Better keep it to myself.

The Real Alice from Wonderland is now a lame student in college, taking the road usually taken by every young boy and girl in the world. Grow up, study, get your certificates, get married, have kids, and die. Thank you very much for attending the joke called life.

They end up not knowing about the Wonderland Monsters trying to bring this world down every week — although it’s been two weeks now and no monster showed up.

Otherness by David Brin
Tiger Threat by Sigmund Brouwer
Lion's Love And Honor: The Pride of Sierra Leandra (Paranormal Romance) by Meg` Ripley
Left by Shyla Colt
Touching From a Distance by Deborah Curtis
The Walkaway by Scott Phillips
Shelley: The Pursuit by Richard Holmes
The Reluctant Alpha by A.K. Michaels
The Queen's Dollmaker by Christine Trent
Sideways by Rex Pickett