Read World of Warcraft: Vol'jin: Shadows of the Horde Online

World of Warcraft: Vol'jin: Shadows of the Horde 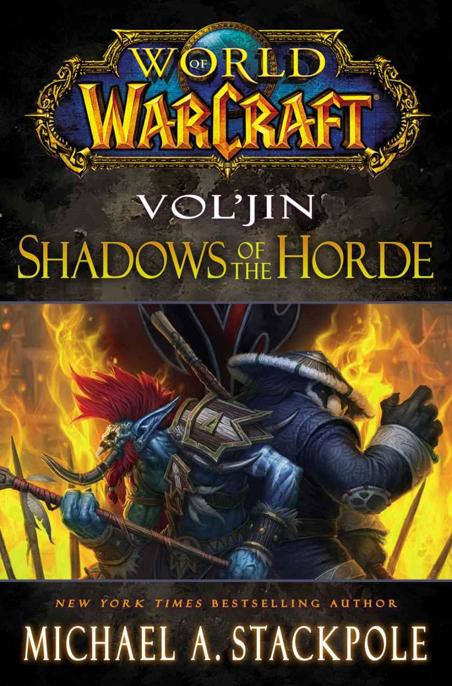 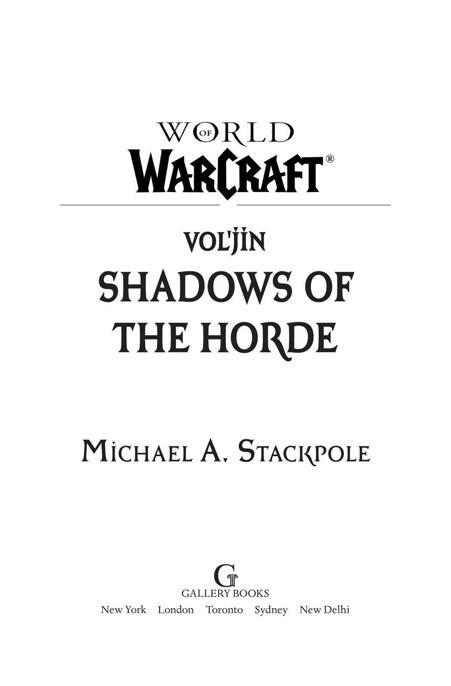 To all the
World of Warcraft
players, who have taken a fascinating world and made it that much more fun.

(Especially those who, through random acts of buffery, have saved me more than once.) 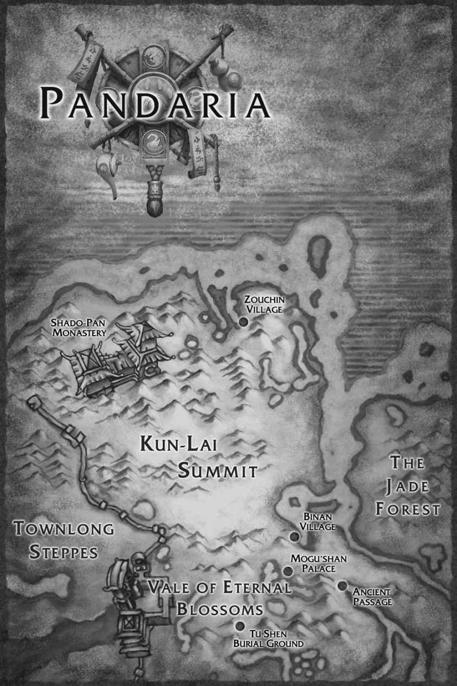 B
rewmaster Chen Stormstout couldn’t think of anything he didn’t like. There certainly were some things he liked less than others. For example, he wasn’t terribly fond of waiting for his latest brew to ferment and mature to the point where he could sample it. That wasn’t because he was anxious to know how it tasted. He had that figured out already—it would be fantastic. What he liked less about waiting was that it gave him all sorts of time to think of new brews, with new ingredients, and he wanted to dive right in and work on them.

But brewing took time and care. With the equipment at the brewery fully involved in the last batch, waiting to develop a new batch was his only option. That meant he had to find something to do by way of distraction, otherwise waiting and planning and brewing things up in his mind would drive him crazy.

Out in the world, in the lands of Azeroth, finding distraction had been easy. There was always someone who didn’t like you, or a hungry creature that wanted to eat you—and discouraging both did wonders to occupy an idle mind. And then there were places that had once been, or were becoming, something else that might be again what they were. On his travels he’d seen many of those places and more, and had even helped make some into something.

Chen sighed and looked toward the center of the sleepy fishing village. There his niece, Li Li, was entertaining a dozen of Binan Village’s cubs—most of them residents, some of them refugees. Chen was pretty sure she had intended to tell them stories of her travels on Shen-zin Su, the Great Turtle, but this plan had gone awry. Or maybe she was still telling a story but had enlisted their aid in acting out a scene. Clearly the story of a fight, and one that apparently involved her being swarmed over by a pack of young pandaren.

“Is everything going well, Li Li?”

The slender girl somehow surfaced from amid a boiling sea of black and white fur. “Perfectly well, Uncle Chen!” The frustration in her eyes belied her words. She reached down, plucked one scrawny boy from the pack, and tossed him aside, then disappeared beneath a wave of shrieking cubs.

Chen thought to step in but hesitated. Li Li was in no real danger and she was a strong-willed girl. If she needed help, she’d ask for it eventually. To intervene before that would make her think he doubted she could take care of herself. She’d sulk for a bit, and he just hated when she did that. She’d also be outraged and then would go do something to prove she could take care of herself, and that might land her in even greater trouble.

Though that was his primary line of reasoning, the whispers and tutting from the two Chiang sisters gave him further cause to hold back. The two of them were old enough to remember when Liu Lang had first departed Pandaria—or so they said. Though their fur ran much more to white than black, save where they darkened it around their eyes, Chen assumed they weren’t quite that old. They’d spent all their lives in Pandaria, and very little of them in the company of those who had lived on the Wandering Isle. They’d developed opinions of those who “chased the turtle,” and Chen had taken a delight in confounding them by acting against type.

Li Li, in their eyes, was purely one of the turtle’s wild dogs. Impulsive and practical, quick to action and a bit prone to overestimation
of her own abilities, Li Li was a fine example of a pandaren accepting the philosophy of Huojin. It was people of such an adventurous spirit who had departed on the turtle or adventured in Outland. Such conduct, in the minds of the Chiang sisters, simply was not to be condoned or given any credit.

Nor were those who did such things.

Chen, were he of a nature to dislike things, certainly would dislike the Chiang sisters. He’d actually taken a liking to them. In addition to fixing up the Stormstout Brewery and concocting fantastic beverages, he’d wandered Pandaria to learn more about the place he’d determined would be his home. He’d seen them, two maiden sisters, struggling with a small garden patch that had gone untended during the yaungol siege, and had offered to help.

They’d not so much as replied to him, but he’d pitched in anyway. He repaired fences and weeded. He laid down new stones for the path to their door. He entertained their great-grandcubs by breathing fire. He swept, hauled water, and piled up firewood. He did that under their disapproving stares and only because, beneath it all, he read disbelief in their eyes.

He’d worked long and hard without their speaking a word to him before he first heard their voices. They didn’t speak to him or with him or even really at him. They spoke toward him while speaking to each other. The elder had said, “It is the sort of day that tiger gourami would be nice.” The younger merely nodded.

Chen knew it was a command, and he complied. He did so carefully. He fished three gourami out of the ocean. The first fish he threw back. The last one he kept for the sisters, and the largest he gave to a refugee fishwife and her five cubs because her husband was still one of the missing.

He’d known that giving the sisters the first fish would have been seen as a sign of his being hasty. To give them all three would show he was prone to proud displays of excess. To give them the biggest, which was more than they could eat, would show a lack of discretion
and calculation. But in doing what he did, he demonstrated reason, consideration, and charity.

Chen did understand that his exercise of dealing with the sisters wasn’t likely to win him friends or patronage. Many others he’d known in his travels would have considered them ungrateful and ignored them. For Chen, however, they were a means through which he could learn about Pandaria and the people who would become his neighbors.

Maybe even my family.

If Li Li was an exemplar of the Huojin philosophy, then the Chiang sisters represented believers in the Tushui. They were given to far more contemplation. They measured acts against the ideals of justice and morality—though both could easily be a narrow, parochial, small-village version of those grander notions. In fact, grand notions of justice and morality might seem far too ostentatious for the likes of the Chiang sisters.

Chen liked to think of himself as being firmly in the middle. He mixed and matched both Huojin and Tushui, or so he told himself. More realistically, he tended toward Huojin when adventuring in the wider world. Here, in Pandaria, with the verdant valleys and tall mountains, with most people enjoying a simple lifestyle, Tushui seemed just the thing.

Deep down, that was what Chen needed distraction from. It wasn’t about new brewing projects but the knowledge that someday, at some point, he would have to choose one philosophy or the other. If he did make Pandaria his home, if he found a wife and started a family, the days of adventuring would vanish. He’d just become a roly-poly brewmaster, armored with an apron, haggling with farmers over the price of grain and with customers over the price of a mug.

That wouldn’t be a bad life. Not bad at all.
Chen neatly stacked firewood for the sisters.
But would it be enough?

Cub shrieks again attracted his attention. Li Li was down and
wasn’t getting up. Something sparked inside him—that ancient call to battle. He had so many stories of great conflicts. He’d fought alongside Rexxar and Vol’jin and Thrall. Rescuing his niece would be nothing compared to those battles (and recounting those tales would make his brewery very popular), but taking action fed something within him.

Chen jogged over and waded into the roiling pile of bodies. He grabbed cubs by the scruff of their necks and tossed them to one side and the other. Being mostly muscle and fur, they bounced and rolled and twisted around. A few bumped against one another, with parts pointing up that should have pointed down. They untangled themselves and scrambled to their feet, ready to dive back in.

Chen growled with just that right mix of gentle warning and true menace.

The elder pandaren straightened up, and by instinct, so did most of the cubs. “What exactly was going on here?”

One of the bolder cubs, Keng-na, pointed toward a recumbent Li Li. “Mistress Li Li was teaching us to fight.”

“What I witnessed wasn’t fighting. It was brawling!” Chen shook his head, exaggerating the action. “That will not do, not at all, not if the yaungol return. You are to have proper training. Now, look smart!” Chen snapped to attention as he gave the command, and the cubs mimicked him perfectly.

Chen fought to hide a smile as he dispatched the cubs, singly and in groups, to fetch more wood, to haul water, and to get sand for the sisters’ pathway and brooms to smooth it down. He clapped his paws sharply, and they sprung to their tasks like arrows loosed from taut bows. He waited until they’d all disappeared before he offered Li Li a paw.

She looked at it, her nose wrinkled with disgust. “I would have won.”

“Of course, but that wasn’t the point, was it?”

“No, you were teaching them a sense of camaraderie. They’re a little squad now.” Chen smiled. “A bit of discipline, some division of labor, and they might be useful.”

He added volume to the last phrase for the sisters, since they’d seen that initial benefit.

Eternal Melody by Anisa Claire West
The Unknown University by Roberto Bolaño
The Other Side of You by Salley Vickers
The Wedding Trap by Tracy Anne Warren
Farewell Horizontal by K. W. Jeter
Bloodstream by Luca Veste
Shared by the Highlanders by Ashe Barker
Shimmers & Shrouds (Abstruse) by Brukett, Scarlett
Johnny Marr by Richard Carman
Lonesome Rider and Wilde Imaginings by Heather Graham