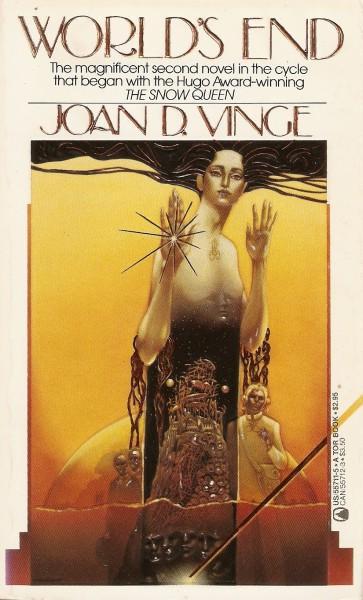 Volume 2 in the Snow Queen Cycle.
Now at last, Joan D.
Vinge
,
best selling author of
The Return of the Jedi Storybook
, returns to the
universe of her award-winning
Snow Queen
, with a novel as dazzling, as
compelling, as the “future classic” (Arthur C. Clarke). BZ
Gundhalinu
,
police officer of the Hegemony, member of the elite “tech” class of the ruling
planet
Kharemough
, left the planet
Tiamat
before the
Stargate
closed, cutting himself off forever from the simple barbarian girl who gave him
back his sense of self worth. Moon
Dawntreader
Summer
is now the Summer Queen, and BZ knows he can never again be her lover. But the
strict
Kharemoughi
codes of honor have made him an
outcast, too, and he selects a remote outpost of the Hegemony for his new
assignment: Four, a planet where the police work is tough and never-ending, and
where he can try to forget. Four boasts great mineral wealth, which attracts
all the rogues and ruffians of the universe to the vast, uncharted wilderness
known as World’s End.
Travellers
to that region
allude to unimaginable horrors, but few actually return to speak of it. World’s
End has swallowed up countless numbers of prospectors, including
BZ’s
brothers. When
BZ’s
obsession with Moon and his concern for his family interfere with the
performance of his duties, he is granted leave and he sets out for World’s End.
His quest: to rescue his brothers from the wilderness and restore the family’s
lost honor and lost wealth. But something else is calling him. A sibyl has told
him about the ruined city of
, on the
edge of
. A mysterious force is at work
there, a force that disrupts the fabric of space and time, a force that may
yield up the secrets of Old Empire technology. But before BZ can unlock the
puzzle, he must face the evil deep inside himself—and in breathtaking passages
of sheer storytelling power,
Vinge
makes
World’s
End
an extraordinary novel of one man’s search for himself—his soul—his
love—and his destiny.

JOAN D.
VINGE reached the top of national bestseller lists in 1983 with
The Return
of the Jedi Storybook
. Her novel
The Snow Queen
(1980) won the Hugo
Award for Best Science Fiction Novel, and established her as a major novelist.
She lives in Chappaqua, Mew York, and maintains close ties to her hometown,
.

The
Outcasts of Heaven’s Belt

Eyes of
Amber and Other Stories
(collection)

in the Ashes
(collection)

for
jim
, my dearest friend and severest critic ... who made me
follow this journey to its end.

“The mind
of man is capable of anything—because everything is in it, all the past as well
as all the future.”

“Nothing of
him that doth fade

But cloth
suffer a sea-change

Into something rich and strange.”

“Shall I
bring the prisoners to your office, Inspector?” the voice from his desk speaker
asked him.
And again, when he didn’t answer, “Inspector
Gundhalinu
?”

Gundhalinu
turned away from the high window at last, from the view of
Foursgate
shrouded in mist, the rococo pattern of rain tracks on the glass. He had been
looking at the Pantheon; it was just visible from where his office
lay
, its multiple domes of azure and gold ceramic half
obscured by newer, more graceful structures. He took an antique watch from his
pocket, glancing absently at the time ... looking at the watch itself, turning
it over
an
for the feel of its
comfortable familiarity in his hand. He sighed. The hour was getting late—but
not late enough that he could postpone this final duty for another day.

Besides, he
had no more days left. The ceremonies at the Pantheon were due to begin today
at sunset, and they would drag on through half of tomorrow. Crowds were
gathering there already ... gathering from all over Number Four to see him. The
thought made him grimace. These were only the first of too many ceremonies that
he would have to wade through, like streams, on the way to where he wanted to
go.

He had put
off the meaningless honors, the public displays of adoration, for as long as
possible, using his wound and his weakness as excuses. But he had spent the
hard-won privacy of his convalescence working
obsessively,
trying to put what was left of his personal life in order before he became
public property forever. He knew what he would see if he faced himself in a
mirror; he had not gone near one since his release from the hospital. But he
had endured far worse things than his own reflection too recently to let it
bother him, or stop him. There had been no time for weakness, or pain, or doubt
... there never would be again.

He moved
back to his desk. His hand reached for the speaker plate at last; hesitated, as
more seconds slipped by. The judgment he was about to pass was only a
formality, a decision made weeks ago concerning an act that should have been
done years ago. And yet ... he needed more time.

“Right,
Inspector.” There was no discernible emotion in the disembodied voice, even
though his sergeant had been waiting for more than an hour down in the
detention wing.
Ossidge
was a phlegmatic lump, stolid
and unquestioning.
Gundhalinu
tried to imagine what
Ossidge
would make of World’s End, or what it would make of
him.
The irresistible force and the immovable object.
But then, he couldn’t imagine that
Ossidge
would ever
even dream of making that trip; making the Big
Mistake ....

He dropped
into the seductive softness of his desk chair, letting it re-form around him.
Just for a
moment ....
Just for a moment adrenaline stopped spilling into his bloodstream, and he was
vulnerable. If he could only close his eyes, empty his mind and meditate, have
one uninterrupted moment of peace, before ... He pushed himself up out of his
seat angrily, wincing as the abrupt motion hurt the half-healed wound on his
side. He forced the pain out of his mind, as he had done over and over again
for the past month.

He needed
this time, this final stolen hour, for something more important than rest. So
much had changed, and was about to change, in his life. He needed time to
remember who he was.

He touched
his belt buckle, pressing the hidden speaker button on its built-in recorder.
The recorder had a direct memory feed, which he had used when he had kept the
journal—to keep it private, pointless mental digressions and all. But now he
left it on voice, hearing it mimic his own speech, the sounds familiar yet
sufficiently distorted to seem almost impersonal.

He turned
back to the window, frowning at the rain tracks on the pane.
Rain again.
Doesn
‘t
it ever stop?
But he knew the answer.
No more than time
does
. He sat down on the deep sill, resting his forehead against the glass,
letting the utter exhaustion of his body and mind hold him there. He watched as
his breath condensed into fog, obliterating the present, and felt the empty
room behind him fill up with ghosts.

Today I
arrived at World’s End. It’s still difficult for me even to believe I’m
thinking those words. But I’ve decided to record everything I experience here,
as completely as possible. The notes of a reasonably objective observer can
only be an improvement over the mass of lurid misinformation about this place.
And if anything should happen—never
mind ....

The shuttle
trip from
Foursgate
was uneventful to the point of
tedium. I could almost have believed that I was simply another tourist
sightseeing on a strange world ... except that there were only two other people
on the flight, and neither one of them looked pleased about their destination.
I didn’t speak to them, and they returned the favor. The sky was overcast for
almost the entire trip; I saw nothing of the world so far below. For all I knew
we could have been circling
Foursgate
for two hours
instead of covering half a planet.

When we
landed the terminal was exactly like half a dozen others I’ve seen here on
Number Four—a masterpiece of the banality that passes for modern on this world.
The
Authority runs its
franchises with the same mindless efficiency wherever they are—even at the end
of the world.

As I
crossed the invisible climate-control barrier that separated the terminal from
the real world outside, I finally began to realize that I had come to World’s
End ... I had really made the Big Mistake.

The heat
was suffocating. The air was so thick with moisture and strange odors that
breathing itself was difficult. I dropped the bags that held the few belongings
I’d brought with me, and looked for some sort of transportation. If there was
anything, even a ground vehicle, it wasn’t running. The two locals who had been
on my flight passed me
worldlessly
and began walking
away down a cinder track. I thought I could see some sort of buildings in the
distance, which I assumed were the town. A jungle of unwholesome-looking plant
life pressed in on the road and the terminal. There were black scorch marks
where the flora had been burned back recently along the roadsides. I took off
my heavy jacket, picked up my belongings, and began to walk.

I stopped
again as I reached a gateway at the edge of town.

someone
had scrawled on the blistered wall, complete with the official seals.

THE ASSHOLE OF THE HEGEMONY.

It struck
me like a slap in the face, a grotesque insult. I stared at it until the
tension of my clenched jaw made my face hurt—made me remember who I’m not,
here. I said to
myself
, “It’s not your problem.”

I looked
through the gateway, feeling as if someone were watching me. But the shuttered
whiteness of the street was empty; the buildings lay dazed in the insufferable
humidity of the early afternoon. I stood there awhile longer, feeling the sweat
crawl down my chest beneath the coarse cloth of my loose blue tunic; suddenly I
longed for the security of a uniform. My head began to throb with the silent
rhythm of the heat ... and all at once the whiteness of the street seemed to
shimmer and re-form as endless fields of snow. A mirage, a hallucination—I’ve seen
it a hundred times. You’d think a sane man would be able to put it out of his
mind, after so
long ....
I hunched my shoulders,
feeling a chill as I went on through the gate.

Bruiser: A Lonely Housewife Embarks on a Passionate Affair with an Alpha Male MMA Fighter by Scarlet, Simone
New Beginnings by Helen Cooper
A New Day Rising by Lauraine Snelling
In the Heart of the Sea by Philbrick, Nathaniel
Demons Don't Always Tell The Truth (Kate Storm Series Book 3) by Meredith Allen Conner
Someone Irresistible by Adele Ashworth
An Island Apart by Lillian Beckwith
Beauty from Pain by Georgia Cates
Not To Us by Katherine Owen
Viking Unbound by Kate Pearce