Read You and Me and the Devil Makes Three Online

You and Me and the Devil Makes Three 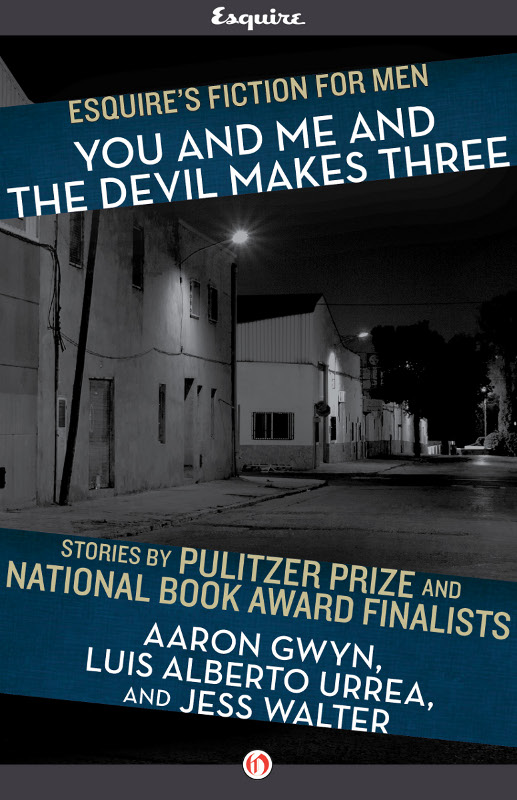 You and Me and the Devil Makes Three
Esquire’s Fiction for Men
Stories by Aaron Gwyn, Jess Walter, and Luis Alberto Urrea
Edited by Tyler Cabot and Benjamin Percy

You and Me and the Devil Makes Three, by Aaron Gwyn

YOU AND ME AND THE DEVIL MAKES THREE

Y
OU TURNED EIGHTEEN
two days ago and still haven’t bought cigarettes. You can’t purchase beer and you’ll never afford the trip to Padre, but what you will do is go up these steps behind Jackson and get an eight ball from his friend. Up the steps behind Jackson, across the strip of concrete porch, onto the dirty carpet sample that serves as a welcome mat. You follow Jackson inside the house, reach back to close the door, but someone calls to leave it open, so that is what you do.

Jackson’s friend is named Curtis. You’ve heard Curtis stories for years, now, Ohio stories, mostly, from when Jackson lived in Columbus. Jackson has always referred to Curtis as
the Ohioan
and you’ve come to think of the man in the shape of that state. So it’s strange to actually meet the Ohioan: five eight, 130 pounds, pale and bearded and nearly cadaverous. You’ve wanted to meet the Ohioan, but right now the Ohioan shows no interest in meeting you back. He holds the lower half of a pool cue in his right hand and he’s pacing back and forth between one of the sofas and the kitchen, tapping it against his shin. You walk over and seat yourself in a filthy blue recliner. The Ohioan has something in his left ear you think is a Bluetooth and then recognize as a hearing aid: flesh-colored and overlarge, wrapping around the back of the lobe. Like a hearing aid from the seventies. Like the first one ever made.

It’s cold here in Charlotte, first week of December, and it’s cold in this room with the open front door. Curtis paces back and forth, tapping the cue against his leg.

Then he notices the two of you and looks over at Jackson.

“Asshole thinks she’s the one who’s had enough,” he says. He swings the cue and rests it against his neck. “I’m the cunt that’s had enough
. Me.
”

“Preaching to the choir,” Jackson says.

You just listen. Or half-listen, really. You are six feet and a quarter-inch tall—six one in boots—and if you hadn’t lost the wrestling scholarship after testing positive for growth hormone, you’d be perfecting your double-leg on the padded purple mats of Eastern Carolina. You’re used to guys bitching about their women and what you want is to get off. In the religious-studies course you were taking, you learned the Hebrew word for “blessing” means “more life,” and that is exactly how you thought of juicing, how you think of coke. Words like
forever
leap right to mind. Phrases like
more and more
. Only problem is the people you have to be around, like this Ohioan character, who you realize, now you’ve met him, is a wreck—some deaf burnout who thinks he’s gangster. Jackson had said you’d buy the eight ball from the man, hang a few minutes, and then you could bounce. You told Michelle you’d be back in half an hour, but you see, now, that this isn’t going to happen.

You clear your throat. You’re fixing to ask about the blow, when another guy walks in and seats a cordless phone in its charger. He nods hello and then comes over and sits on the sofa beside Jackson. The two of them touch knuckles and the man says, “Y’all might have noticed that Curtis is a little agitated.”

“No shit,” you tell him and the guy laughs. He leans toward you, smiles conspiratorially, and whispers, “I think he thought she was
the One.
”

You nod, flash on Michelle again—half an hour—and ask if you can use his phone.

The guy opens his mouth to answer, but he doesn’t get to answer. The Ohioan answers for him.

“The fuck you asking
him
?”

You stare at the Ohioan. Can’t be older than twenty-three, twenty-four, but he already looks like he’s in his forties. A gray tint to his skin, those haggard features you see on men holding cardboard signs at intersections.

The Ohioan has managed to cross the twenty feet between you without you ever noticing. He’d been on the other side of the room, you’d asked to use the phone, and now the man is standing right here. You’re suddenly conscious of the pistol tucked in the waistband of his sweats. You study the walnut-checkered grips.

You hadn’t seen the pistol before.

The Ohioan says: “You give me a ride to this woman’s, I’ll give you a brand-new speaker.”

“Car battery’s dead. You run me to this girl’s, I’ll give you this Pioneer.”

You sit there a moment. You don’t care about the speaker, but you can see the cocaine receding toward the stars.

The Ohioan extends the pool cue toward the open front door and you rise and follow the man outside, down the steps, along a broken strip of sidewalk, over to a late-eighties model Camaro parked under the carport on the house’s north side. The Ohioan keys the trunk’s latch, lifts it, and motions you forward. You step up and see a ceramic S-Series woofer, reinforced dust cap, ultra-linear magnetic circuit. It’s an expensive piece of technology, no question.

“You’re just going to give this to me?”

You cross your arms and study the woofer.

“What about a line?”

“You want the speaker?”

“I don’t give a shit about the speaker.”

“So, what about an eight ball?”

“The ride for an eight ball?”

You have a deal already, but you don’t say it. You look at the Ohioan. You tell him to show you the coke.

At the kitchen table, the Ohioan fetches a plastic lunch pail with the Hulk fading in green and purple along its side. He takes out the thermos, screws off the lid, and rolls a ball of aluminum foil onto the glass tabletop. Opens the foil, opens a plastic baggy inside the foil, digs in a car key, comes up with a fringe of white powder, and dumps it on the glass. He produces a razor blade, begins to chop it, then string it in a line. You carry a two-inch section of green plastic straw for just such occasions, and you pull this from your billfold, bend over, and, holding shut one nostril, snort until the inside of your nose goes numb and there’s that cold sensation in the back of your throat.

You stand up and swallow. You can feel the lamps giving off actual heat.

You motion for him to hand it over and the Ohioan closes the ball of foil and flicks it toward your waiting palm. Your heart is hammering in your chest and you can feel the blood pulsing through your carotids.

You are thinking,
forever.

You are thinking,
more and more.

Y
OU GO DOWN
Independence Boulevard and make a right on Harris, the three of you in the Charger—you driving, the Ohioan in the passenger seat, Jackson in the back. You eye Jackson in the rearview, but Jackson’s fiddling with something in his lap. His cell phone, maybe. A cell phone game. You watch until you see a red glare from the windshield and then you hit the brakes. The car squeals to a stop and you come within an inch of rear-ending a Prius.

It’s the first thing he’s said since he got in the car. It’s only taken ten minutes to get from his house to this intersection and in that time the coke’s worn off and left you with the frazzles. Better the coke, worse the frazzles, and these frazzles are definitely bad. But it’s not being frazzled that has you twitchy. It’s the presence that’s entered the car, like an actual fourth person. Usually, situation like this, you’ll do what you always do—bow up, get fierce—but there’s that foreign thing in the air, strange you didn’t smell it sooner, and before giving it another thought, you take the ball of foil from the pocket of your sweatshirt and pitch it into the Ohioan’s lap.

The Ohioan turns his head very slowly and stares.

“Not looking for drama,” you tell him. “Not trying to disrespect you. Give you ten for the line and we’ll call you a cab.”

The Ohioan continues staring. His eyes are very blue.

“More than fair,” you say, starting to get agitated. You’re not used to explaining yourself, and if he wasn’t Jackson’s boy, you’d tell him to fuck on off.

The Ohioan’s jaw bulges. His hearing aid looks like a prop. He points to his temple and says, “There’s a thing on your face.”

You turn to look at yourself in the rearview and are sorry as soon as you do. In your periphery, you see the Ohioan take the pistol from his waistband—snub-nose .357—reverse it in one hand and grip it by the barrel. The revolver is at the Ohioan’s waistband and then there is a sharp pain in your mouth and your ears are ringing and the revolver is back in the man’s lap. The Ohioan has you by the shoulder, clutching your hoodie in his fist, and he grips the pistol like a hammer and strikes you with it again. There is a bright flash and the rage rises up inside you, stomach to sternum, but before it can reach your face, you feel it collapsing, and then there’s another flash, and the Ohioan is pointing at the windshield, the volume turned way down.

“Light’s green,” he says, strikes you a fourth time, and you feel your world wobble and your mouth tastes bad.

“Light’s green,” says the Ohioan, and he says he’ll kill you if you don’t drive.

You pull through the intersection—the world like something seen through the wrong end of a scope—and keep between the lines somehow, and you feel fluid running down the back of your throat and the Ohioan is still talking.

The world is becoming sharper, but your mouth hurts worse. You press your tongue against your front teeth and feel a gap. One or two missing. Several more loose. Your mouth fills with blood and when you swallow, something sharp travels down the back of your throat like a hard, slick pill. The Ohioan still has you by the shoulder, something almost parental in his grip.

“First mistake,” he tells you, “is the only mistake you get. Think I’m some cunt’s going to lay down and take it. Think I’m some lay-down cunt. You wanted coke, you got coke. You want it, you got it. Going to back out of a deal, leave me standing on the side of the street, ’cause no one’s ever thought of that?”

You concentrate on keeping the car straight and the steering wheel in your palms. You blink several times, try shaking the cobwebs out of your head, but everything is in reverse. It should be you gripping the Ohioan by the shoulder and telling him what to do, but you can’t manage to tell the Ohioan anything, and you think he must’ve broken your jaw. Not that it matters. If your jaw wasn’t broken, you still wouldn’t have a thing to say. The rage has abandoned your chest, the foreign thing in its place now, curled down beneath inside your ribs. Fear, you suddenly realize—this is how it feels. The Ohioan is five eight, 130 pounds, and you will do whatever he says.