Read Zombie Fallout 4: The End Has Come and Gone Online

Zombie Fallout 4: The End Has Come and Gone 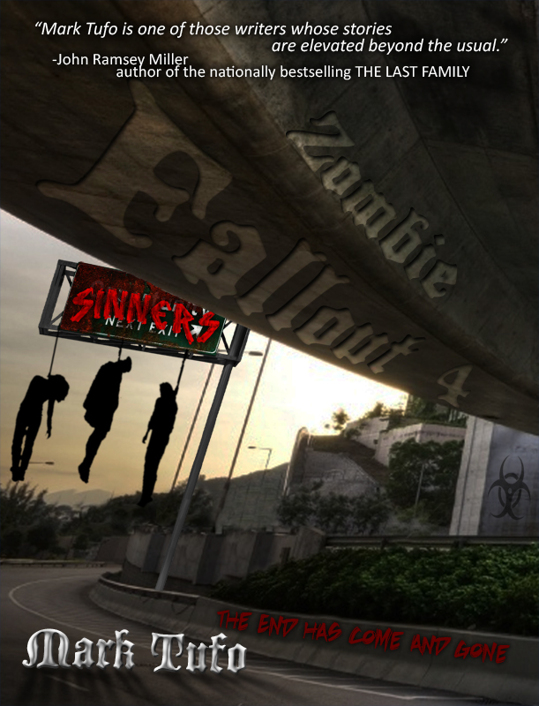 Mark Tufo is one of those writers whose stories are elevated beyond the usual.
- John Ramsey Miller author of the nationally bestselling THE LAST FAMILY

Zombie Fallout IV: The End…
Has Come and Gone

Discover other titles by Mark Tufo

and
http://zombiefallout.blogspot.com/
home of future webisodes and find me on FACEBOOK

This ebook is licensed for your personal enjoyment only. This ebook may not be re-sold or given away to other people. If you would like to share this book with another person, please purchase an additional copy for each recipient. If you're reading this book and did not purchase it, or it was not purchased for your use only, then please return to Smashwords.com and purchase your own copy. Thank you for respecting the hard work of the author.

To my wife; we’ve walked a difficult path these last few months and except for a scratch or two from an errant briar we’ve come out in pretty good shape. I look forward to the trail we’re getting ready to blaze and I love you with all my heart.

To my family both immediate and extended your strength has been a tangible force upon which I have been able to keep myself upright, I love you all.

To Mo Happy, I’ve asked a lot of you at a time in your life when maybe you needed a break, I appreciate your hard work, dedication and friendship. Your skills will get you far.

Always to the men and women of the armed forces, police and fire departments, all of you are the reason why this country is so great. Thank you for all that you do and remember that there are more of us thinking about you than you realize.

To those that signed up for the name contest, I told you guys I’d get you in the book one way or another! So thank you to all those listed below.

CHAPTER EIGHT – BT and Meredith (Plus One)

Hi all I just wanted to say thank you for your continued support and your words of encouragement, for always telling your friends and families about these books and for basically just being awesome readers. I have told some of you that this ‘series’ was basically only supposed to be one book and then I quickly realized that Talbot was WAY t o o long winded. That first book became a trilogy almost overnight, I was halfway through the third book when I realized the story just wasn’t and couldn’t be completed in that time frame. So most folks were pretty happy when I said the trilogy was now a four book series, others not so much. I got some hate mail expressing that I was outright deceiving my readers, most of you know that was never the case if you have EVER sent me any type of correspondence you know that I value and appreciate every reader I have. With that being said, as I sit here today (
9/29/11
) there will be a ZF5 and right now I think that’s it, but I will not guarantee that. So dear reader if you are hoping that this is the conclusion to the Talbot saga , not quite yet, most likely the next installment (or maybe not). Is that vague enough? You guys are the reason I write, keep on reading and I’ll keep on writing, as always I love to hear from you guys!

The End…has come and gone. This is the new beginning, the new world order and it sucks. The end for humanity came the moment the U.S.
government sent out the infected flu shots. My name is Michael Talbot and this is my journal. I’m writing this because no one’s tomorrow is guaranteed, and I have to leave something behind to those who may follow. Although the chance of humans making a comeback is remote. We have never been this close to the abyss. Oh, who the hell am I kidding, we’ve already fallen over and are clinging desperately to a small outcropping.

I’ve lost damn near everything in an attempt to get back to the East Coast Talbots. I watched as two dear friends departed to their families in the south, to never be heard from again. I watched as my neighbor, a valiant warrior named Jen, was shredded by zombies. My daughter’s fiancé Brendon died in a rescue attempt for me, BT and Jen. And my adopted son Tommy has gone missing. So now I must leave ‘home’ and strike out against a relentless enemy named Eliza, who has placed me on the top of her ‘to kill’ list. The clock is ticking. My son Justin has been infected with a low dose of the zombie virus and for the most part has been able to keep it at bay, although with some notable side effects, one being that Eliza can use him as a spy. While we were recuperating on the banks of Lake Erie in Camp Custer , Doc Baker came up with a serum that Justin has to take daily. It quite literally keeps the Demon out of his head, the problem being is that we only have forty-five or so of these shots left.

So either we find Eliza and deal with her or she’ll find us. Come to think of it, both ways really kind of blow. I’d much rather wait out the end of the world in a nice cozy cabin but now it’s personal. She has dominion over two of my sons, and is directly responsible for the death of my future son-in-law.

“Is everything all packed?” Ron asked.

“Hell Ron, I’m a Talbot, everything was packed last night,” I told him.

“One more thing then,” he said. “I need to show you something.”

“I’m not a doctor, I don’t know what boils on your ass mean.”

“I know, it’s just my way of diffusing the stress.”

Ron smiled wanly at me as he led me to the back of his bedroom, more specifically into his master closet.

“Holy crap this closet is huge, you could sleep in here,” I jibed.

“I have,” he responded. When he didn’t elaborate, I figured this to be his ‘doghouse’ so to speak. “I even have cable in here,” he finished proudly.

“Get out?” I questioned him.

He moved a duffle bag aside to show a small 19” flat screen set back against the wall. “Sometimes I start a fight when the Sox are on just so I can get some peace.” I was nodding my head. “
B
rilliant.” “I thought so,” he said, smiling modestly.

“This is cool and all but this isn’t why you brought me here, is it.” It was more of a statement than a question.

“Not so much,” he said as he bent over, rooting around and under a small mountain of sweaters. He finally pulled out the prize he was searching for. It was an old suitcase that had seen better days and a box roughly the size of a football, not the shape mind you, just the size.

“Any chance you’ve got a hand grenade in there?” I asked him hopefully, pointing to the small box.

“Nothing quite as explosive, literally.”

“I just remembered it and I thought it might be relevant. Dad gave me this box and the suitcase when I was 15. He told me this story about how his father gave them to him to eventually give to his, at the time, unborn grandkids. Grandpa told Dad to never open these and that he should give these to his kids because they would know what to do with them.” “Wait, so Papa John gave this stuff to Dad, with the explicit directions not to open them, so that he could give them to his future kids to open?” “Yeah, that’s the gist of it.”

“And you’ve been hauling this stuff around since then? But I’ve never seen it and I used to snoop around your room all the time.” “Nice Mike, so much for the sanctum of privacy.”

Christmas Showdown by Mackenzie McKade
Video Game Recruiting (Corporate Marines Book 1) by Tom Germann
Captive but Forbidden by Lynn Raye Harris
Tipping the Velvet by Sarah Waters
When Love Hurts by Shaquanda Dalton
The Jewish 100: A Ranking of the Most Influential Jews of All Time by Michael Shapiro
Murder Most Witchy (Wendy Lightower Mystery) by Emily Rylands
Highwayman: Ironside by Michael Arnold
Rough Play by Crooks, Christina
The Girl in the Mask by Marie-Louise Jensen