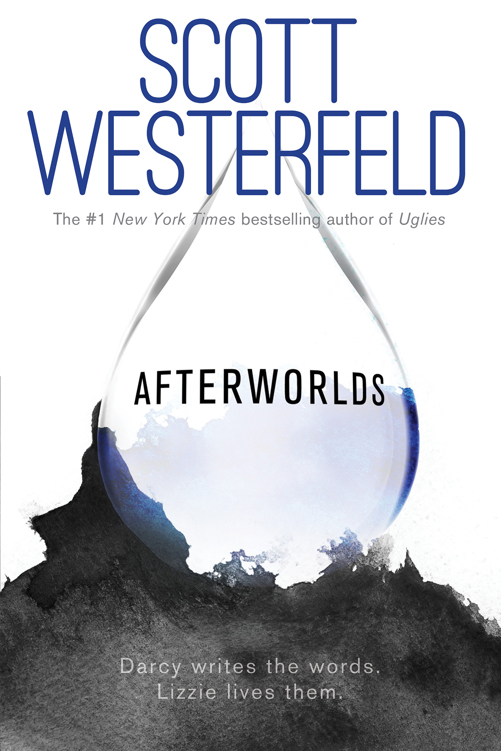 Find out about free book giveaways, exclusive content, and amazing sweepstakes! Plus get updates on your favorite books, authors, and more when you join the Simon & Schuster Teen mailing list.

or visit us online to sign up at
eBookNews.SimonandSchuster.com/teen 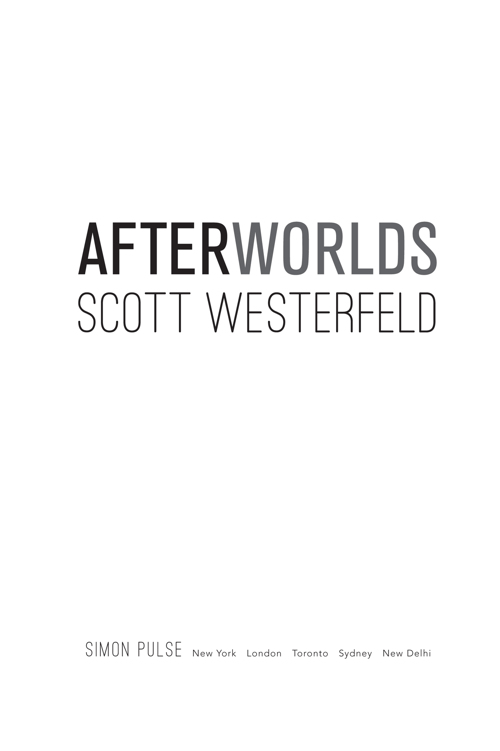 TO ALL YOU WORDSMITHS, YOU SCRIBBLERS, YOU WRIMOS IN YOUR VAST NUMBERS, FOR MAKING WRITING A PART OF YOUR READING

We tell ourselves stories in order to live.

Education is the path from cocky ignorance to miserable uncertainty.

THE MOST IMPORTANT EMAIL THAT
Darcy Patel ever wrote was three paragraphs long.

The first was about Darcy herself. It skipped the trifling details, her dyed blue-black hair and the slim gold ring in her left nostril, and began instead with a grim secret that her parents had never told her. When Darcy’s mother was eleven years old, her best friend was murdered by a stranger. This discovery, chanced upon during an idle web search, both shocked Darcy and made certain things about her mother clearer. It also inspired her to write.

The second paragraph of the email was about the novel Darcy had just finished. She didn’t mention, of course, that all sixty thousand words of
Afterworlds
had been written in thirty days. The Underbridge Literary Agency hardly needed to know
that
. Instead, this paragraph described a terrorist attack, a girl who wills herself to die, and the bewitching boy she meets in the afterworld.
It promised skulking ghosts and the traumas that haunt families, and little sisters who are more clever than they appear. Using the present tense and short sentences, Darcy set the scene, thumbnailed the characters and their motivations, and teased the conclusion. This was the best of the three paragraphs, she was later told.

The third paragraph was pure flattery, because Darcy wanted very much for the Underbridge Literary Agency to say yes to her. She praised the breadth of their vision and paid tribute to their clients’ genius, even while daring to compare herself to those illustrious names. She explained how her novel was different from the other paranormals of the last few years (none of which had a smoldering Vedic psychopomp as its love interest).

This email was not a perfect query letter. But it did its job. Seventeen days after pressing Send, Darcy was signed to Underbridge, a flourishing and respected literary agency, and not long after that she had a two-book deal for an astonishing amount of money.

Only a handful of challenges remained—high school graduation, a perilous decision, and parental approval—before Darcy Patel would be packing her bags for New York City.

I MET THE MAN OF
my dreams in an airport, just before midnight a few days into the New Year. I was changing planes in Dallas, and I almost died.

What saved me was texting my mother.

I text her a lot when I’m traveling—when I get to the airport, when the flight’s called, and when they make us put our phones away. I know, it sounds like something you’d do with your boyfriend, not your mom. But traveling alone made me nervous even before I could see ghosts.

And trust me, my mother needs to hear from me. A lot. She’s always been kind of clingy, but even more so since my father ran off to New York.

So I was walking alone through the mostly vacant airport, looking for better reception. This late at night most of the shops were shuttered and dark, and I’d wandered until reaching another
wing of the airport, which was closed off by a metal gate that hung from the ceiling. Through the steel mesh I could see a pair of moving walkways gliding past, empty.

I didn’t see the attack begin. My eyes were focused on my phone, watching as autocorrect made war on my spelling. Mom was asking about my dad’s new girlfriend, whom I’d just met during my winter break visit. Rachel was lovely, always well dressed, and had the same size feet as me, but I couldn’t tell Mom all that.
She has awesome shoes and I get to borrow them
wasn’t the right place to start.

My father’s new apartment was also amazing, twenty stories up, with floor-to-ceiling windows looking down on Astor Place. His walk-in closet was as big as my bedroom back home, and full of drawers that slid open with a sound like spinning skateboard wheels. I wouldn’t want to live there. All that chrome and white leather furniture was cool to the touch and didn’t feel like home. But Mom had been right—my father had made a metric fuck-ton of money since leaving us. He was wealthy now, with a doorman building and his own driver and a glittery black credit card that made shop assistants straighten up. (Calling people who worked in stores “shop assistants” was a thing I’d learned from Rachel.)

I was wearing jeans and a hoodie, like always when I fly, but my suitcase was full of shiny new clothes that I’d have to hide when I got back to California. Dad’s wealth pissed Mom off for good reason: she supported him through law school and then he bailed on us. I got worked up about it sometimes, but then he’d send some of that wealth my way and I’d get over it.

Sounds pretty shallow, right? Being bought off with money that should’ve been my mother’s? Trust me, I know. Almost dying makes you realize how shallow you are.

Mom had just texted me:
Tell me she’s older than the last one. And not a Libra again!

Mom was mostly desensitized to my bad typing. The night before, she hadn’t even noticed when I’d texted that my father and I were eating raw cock dough for dessert. But when it came to Rachel, no typo went unremarked.

Ha!
Wish you’d asked her THAT!

I decided to ignore that, and answered:
She says hi, by the way.

If you’re being ironing, I can’t tell. We are TEXTING, mom.

I’m too old for irony. That was sarcasm.

I heard shouts behind me now, back by the security checkpoint. I turned around and headed back toward my gate, but didn’t look up from the phone.

I think my planet’s about to leave.

OK. See you in three hours, kiddo! Miss you.

You too,
I began to type, but then the world fell into sharp little pieces.

I’d never heard an automatic weapon in real life before. It was somehow too loud for my ears to register, not so much a sound as the air ripping around me, a shudder I could feel in my bones and in the liquid of my eyes. I looked up from my phone and stared.

The gunmen didn’t look human. They wore horror movie masks, and smoke flowered around them as they swung their aim across the crowd. At first everyone was frozen with shock. No one ran or tried to hide behind the rows of plastic chairs, and the terrorists seemed in no hurry.

I didn’t hear the screams until the terrorists paused to reload.

Then everyone was running, some in my direction, some the other way. A guy my age in a football jersey—Travis Brinkman, as everyone learned later—tackled two gunmen, wrapping his arms around them and spinning with them across the blood-slick floor. If there had only been two terrorists he might have won that fight and spent his life a hero, telling his grandkids the story till they got bored of it. But there were four gunmen in all, and the others still had plenty of bullets.

As Travis Brinkman fell, the first running people reached me. Smoke roiled in their wake, bringing a smell like burning plastic. I’d been just standing there, but the acrid scent snapped my panic and I turned and started running with the crowd.

My phone lit up in my hand, and I stared stupidly at it. There was something I was supposed to do with this glowing, buzzing object, but I’d forgotten what. I still hadn’t grasped what was happening, but I knew that to stop running was to die.

But then death was right in front of me—that steel gate stretched across the entire hallway, floor to ceiling, side to side. The closed section of the airport stood behind it, the walkways still flowing. The terrorists had waited for midnight, when we were all trapped in the smallest possible space.

A tall man in a leather biker jacket threw his shoulder against
the gate, and the metal rippled. He knelt to claw at the bottom, lifting it a few inches. Others joined him.

I stared at my phone. A text from my mother:

Try to sleep on the plane.

I stabbed at the screen to bring up a number pad. Some part of my brain realized that I’d never called 911 before. As it rang, I turned around to face the gunfire.

People were scattered on the floor, a trail of them. The terrorists had been gunning us down as we ran.

One of them was walking toward me, still a hundred feet away. He looked at the floor, stepping carefully among the fallen bodies, as if he couldn’t see well through the mask.

There was a tiny voice in my hand, dulled by my battered ears. “What is the location of your emergency?”

“We’re aware of that situation. Security is responding from on-site and they will be there soon. Are you in a safe location?”

The woman was so calm. Looking back, it always makes me cry to think how calm she was, how brave. I might’ve been screaming if I were her, knowing what was happening at the other end of the line. But I wasn’t screaming. I was watching the gunman walk slowly toward us.

He was shooting the wounded people with a pistol, one by one.

“Can you get to a safe location?”

I turned back to the gate. A dozen of us were pulling at it now, trying to lift it up. The metal rattled and swayed, but was catching
against some kind of lock. The gate wouldn’t rise more than a few inches.

I looked for a door, a hallway, a drink machine to hide behind. But the walls stretched away bare and flat.

“I can’t, and he’s shooting everyone.” We were so calm, just talking to each other.

“Well, honey, maybe you should pretend to be dead.”

The gunman looked up from the wounded on the floor, and I could see the glitter of eyes through the two holes in the mask. He was staring straight at me.

“If there’s no way to get to safety,” she said carefully, “maybe you should lie down and not move.”

He holstered his pistol and raised the automatic rifle again.

“Thank you,” I said, and let myself fall as the gun roared smoke and noise.

My knees struck the floor with a burst of pain, but I let every muscle go, flopping over onto my face, a dropped rag doll. My forehead hit the tiles so hard that light flashed across my vision, and I felt a sticky warmth on my brow.

My eyelids fluttered once—blood was running into my eyes.

In a stunned heap I lay there, the gun firing again and again, the bullets hissing over me. The screams made me want to curl into a ball, but I forced myself to stay still. I tried to squeeze my own breathing to a halt.

My body shuddered once, fighting me, demanding deeper breaths.

I don’t need to breathe—I’m dead.

The shooting finally stopped again, but worse sounds filled the ringing silence. A woman crying for mercy, someone trying to breathe with torn lungs. In the distance, I heard the pop and crack of pistols.