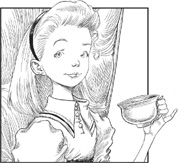 Except in the United States of America, this book is sold subject to the condition that it shall not, by way
of trade or otherwise, be lent, re-sold, hired out, or otherwise circulated without the publisher's prior
consent in any form of binding or cover other than that in which it is published and without a similar
condition including this condition being imposed on the subsequent purchaser

â “What is the use of a book,” thought Alice, “without pictures or conversation?” '

If you feel the same way, then you'll love
Alice's Adventures in Wonderland
. It is full of great conversations. Alice talks to a pipe-smoking caterpillar sitting on a magic mushroom, a sneezing Duchess nursing a baby pig, and a mad Hatter, a March Hare and a Dormouse at a tea-party. My favourite conversation is the one Alice has with a tearful Mock Turtle.

â “When we were little,” the Mock Turtle went on at last, more calmly, though still sobbing a little now and then, “we went to school in the sea. The master was an old Turtle â we used to call him Tortoise â”

â “Why did you call him Tortoise, if he wasn't one?” Alice asked.

â “We called him Tortoise because he taught us,” said the Mock Turtle angrily: “really you are very dull!” '

Just as good as the conversations are the pictures. These
were drawn by a famous political cartoonist called John Tenniel and they bring the strange world of Wonderland vividly to life. There are lizards flying out of chimney pots, fat men doing amazing somersaults, frogs dressed as footmen and a large Cheshire Cat with a huge grin. My favourite illustration in the whole book is the very first. It shows the White Rabbit looking at his pocket-watch, worrying that it's late. I copied that White Rabbit hundreds of times in my sketchbooks, trying to capture the worried expression in his eye, the folds of his coat and the wonderful shading at his feet.

It all began on 4 July 1862, when a young Oxford mathematics lecturer called Charles Dodgson and a friend rowed three children up the Thames from Oxford to Godstow for a picnic. I walked to the same spot and it is a magical place, but I didn't see any white rabbits in waistcoats. It was different a hundred and fifty years ago when Dodgson had his picnic. âOn which occasion,' he wrote in his diary, âI told them the fairy-tale of “Alice's Adventures Underground”.' The youngest of the three children, Alice Liddell, exclaimed at the end of the outing as they returned to Oxford, âOh, Mr Dodgson, I wish you would write out Alice's Adventures for me!' So he did.

That picnic fairy-tale was
Alice's Adventures in Wonderland
which, together with Tenniel's unforgettable illustrations, went on to become one of the most famous children's books in the world. Charles Lutwidge Dodgson
chose his pen-name by taking his Christian names and translating them into Latin before reversing the order and turning them back into English. So Charles Lutwidge became Carolus Ludovicus, which, reversed, became Lewis Carroll. It is just like something out of Wonderland.

When I was nine, I was thrilled when it was announced that the school play that year was to be an adaptation of
Alice's Adventures in Wonderland
. Of course, I auditioned for the part of the White Rabbit, with his umbrella and pocket-watch and fabulous long white ears. I was devastated when I didn't get the part. I soon cheered up, though, when I was cast as the March Hare. I still got to wear some wonderfully long ears and although I didn't have an umbrella or pocket-watch, I did get to eat cake â lots of it at the tea-party! After all, what is the use of a school play, I always say, without large ears and cake?

The text of this edition of
Alice in Wonderland
is that of the first edition. A few verbal changes were made in later editions, but these were of minor importance, with one exception. The verses on pages 116 and 118 were later expanded, and the full version known to all Alice-lovers is as follows:

â'Tis the voice of the Lobster; I heard him declare,
“You have baked me too brown, I must sugar my hair.”
As a duck with its eyelids, so he with his nose
Trims his belt and his buttons, and turns out his toes.
When the sands are all dry, he is gay as a lark,
And will talk in contemptuous tones of the Shark.
But, when the tide rises and sharks are around,
His voice has a timid and tremulous sound
.

I passed by his garden, and marked, with one eye,
How the Owl and the Panther were sharing a pie
.
The Panther took pie-crust, and gravy, and meat,
While the Owl had the dish as its share of the treat.
When the pie was all finished, the Owl, as a boon,
Was kindly permitted to pocket the spoon:
While the Panther received knife and fork with a growl,
And concluded the banquet â

All in the golden afternoon
âFull leisurely we glide;
For both our oars, with little skill,
âBy little arms are plied,
While little hands make vain pretence
âOur wanderings to guide.

Ah, cruel Three! In such an hour,
âBeneath such dreamy weather,
To beg a tale of breath too weak
âTo stir the tiniest feather!
Yet what can one poor voice avail
âAgainst three tongues together?

Imperious Prima flashes forth
âHer edict âto begin it' â
In gentler tone Secunda hopes
ââThere will be nonsense in it!' â
While Tertia interrupts the tale
âNot
more
than once a minute.

Anon, to sudden silence won,
âIn fancy they pursue
The dream-child moving through a land
âOf wonders wild and new,
In friendly chat with bird or beast â
âAnd half believe it true.

And ever, as the story drained
âThe wells of fancy dry,
And faintly strove that weary one
âTo put the subject by,
âThe rest next time â' âIt
is
next time!'
âThe happy voices cry.

Thus grew the tale of Wonderland:
âThus slowly, one by one,
Its quaint events were hammered out â
âAnd now the tale is done,
And home we steer, a merry crew,
âBeneath the setting sun.

Alice! a childish story take,
âAnd with a gentle hand
Lay it where Childhood's dreams are twined
âIn Memory's mystic band,
Like pilgrim's wither'd wreath of flowers
âPluck'd in a far-off land. 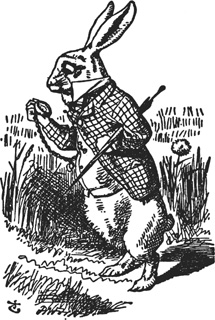