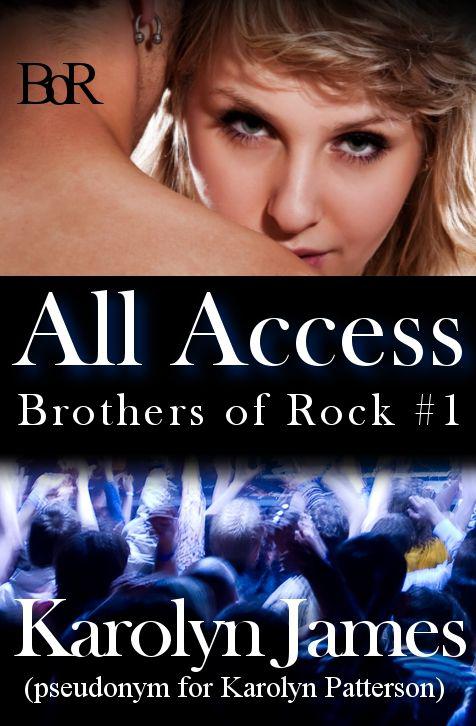 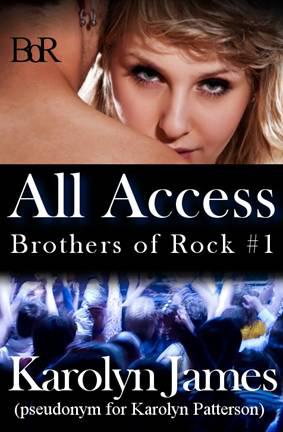 I don't write reviews but for this book I had to say something this time. I just fell in love with this book, the characters and author.

“...this book takes hold of you and draws you into the characters and does not let go.”
With ALL ACCESS, a contemporary romance series begins that explores, life, love, and music. Join the five band members of Chasing Cross as they find that there's more to life beyond the stage.

Jess is caught off guard when a sexy stranger buys her a cup of coffee and asks her to sit with him. He's mysterious, nice, and even though he says the right things at the right time, Jess can sense that there's something hidden about him.

As Johnnie sits across from the beautiful woman, he can't believe she doesn't recognize him. Everyone does. It comes with the territory when you're the lead singer of one of the hottest bands in the world, Chasing Cross. With one more show to go before taking a small break in touring, it feels like luck is on Johnnie's side. That is, if he can find a way to tell Jess who he is, without scaring her off.

After her best friend begs her to come to a concert, Jess finds herself standing in the middle of a crowd. The lights are off, music begins, and the crowd erupts in cheers. She doesn't know much about the band, but that's all about to change. When the lights come on, Jess can't believe her eyes. The lead singer of the band is the man from the café.

Plucked from the crowd during the show, Jess makes her way backstage. The encore may have ended on stage, but the real show is just about to begin. Johnnie's passion quickly turns to romance but the more time he and Jess spend together, the more things get complicated. Johnnie has a big decision to make about himself and the band, testing his loyalty and love for the music, and when Jess's dreams start to come true, she starts to realize that true love exists, but it's not always an easy path to take.

Beth wasn’t sure if love actually existed, but she wrote romance novels for a living and spent her days exploring the emotions of relationships.  She had to smile and live in a world that believed in it all.

Jess Carcraft stared at her laptop screen, tapping her fingers along the keyboard, considering the opening to her new romantic thriller.  The publisher set a rigid deadline on the book and Jess planned on delivering it earlier, wanting to make good with both agent and publisher.  After a fluke run on her first novel, she managed to deliver a second book a few months later which the publisher now prepared to launch with a big push.  Her literary chance now became a literary career.

In the second bedroom of an apartment that she could easily move out of, thanks to an advance on the second book, Jess sat in the same cracked leather chair at the same old black desk her mother bought her when she moved out at age eighteen.  She huddled over the keyboard with a bathrobe on, a half empty cup of coffee already too cool to enjoy, and the images of murder and love racing through her mind.  The images wouldn’t come together for Jess though and she found herself ready to hit a writing wall.  The opening line couldn’t be the only work she’d get done this morning - or today - so she quickly changed gears.

She dumped her coffee, changed into casual clothes, ran a brush through her hair, and brushed her teeth.  As she looked in the mirror, she judged herself acceptable to go outside and face the world.  Hopefully just a small version of the world.

For all the success her name had, she was rarely recognized, mostly because the picture used on her website and for her books was the same picture of Jess standing with one leg up, wearing a long black coat, her lips blood red, her hair styled like she never had it before.  They wanted to capture Jess as some kind of woman detective from a television show but the only expertise in detection that Jess had was when she lost her keys.  And even then, it was a fifty-fifty chance of finding the keys in a matter of minutes.

She grabbed her laptop, slid it into her laptop bag, and left the apartment.

Sometimes going to a local café was all she needed to spark an idea.  Between the regulars and people she never saw before, it operated like its own world.

Plus, Jess’s debut novel started in a café, where the heroine met the hero over a cup of coffee and some casual conversation.

Johnnie stood on the balcony of the hotel, feeling the warmth of the sun as it climbed along his skin.  He closed his eyes and took a deep breath, letting his body wake up.  The night before had gotten a little out of hand, thanks to Danny insisting on celebrating with a bottle of whiskey.

Johnnie could finally tell himself that.

As the front man of chart topping rock group, Chasing Cross, the years on the road had taken their toll on everyone in its own special way.  Millions of albums sold, tours that crossed the globe, awards, and most important of all, the loyal fans, were what kept the band going.  While some bands saw themselves implode in the limelight of success, the guys of Chasing Cross only seemed to grow closer.

Johnnie told himself part of it was because of his younger brother, Danny.  It was something extra special to have his actual brother there with him on stage every night.  Each time Johnnie looked over at Danny, it took him back to their childhood as they both played guitar (horribly at that time) to their favorite songs.  Separated by only a year, they were more like twins than big and little brother.  Johnnie did stand an inch higher than Danny and Danny did have a more boyish look, but there was no denying the two men were brothers.

This leg of the tour was coming to an end tonight, followed by a month long break before picking back up in Spain and traveling Europe for another two months.  The idea of world tour had been such a dream and now Chasing Cross did it every year or two.

Johnnie leaned against the railing and looked down at the street below.  He looked for inspiration, considering more about life than he ever had before.  Ten years ago, when Chasing Cross started, Johnnie was in high school.  They got some friends together to jam and after a couple years of changing band members, a group finally stuck.  Back then, they could write about the potential of life.  Big hits about parties, women, love, and learning to live.  The record label just released their newest album - EightNine - less than six months ago and they were already hounding for more music.  Sometimes Johnnie felt that music had become somewhat disposable, but the second he stepped on stage and saw the thousands of fans waiting, cheering, and singing every song back to him, those thoughts disappeared.

A song played in Johnnie’s head and it made him close his eyes and shake it away.  It wasn’t a song for the band.  It was a song for... something else.  Something else that Johnnie didn’t want to think about, not right now at least.  He looked over his shoulder at the partially opened door to his room, half expecting one of the guys to be standing there.  Over the years, they had formed strong enough of a bond to know when something was going on with one another.  Just like Johnnie made a mental note of how much Rick drank last night.  It was after the show so it obviously did not affect his drumming skills, but by the end of the night, he couldn’t talk.  That wasn’t social drinking, that was drinking to hide something.

Something they’d have to address on their break.

The road took its toll on everyone and that’s why the last time they negotiated a tour like this, Johnnie made it clear that they needed breaks.

Johnnie heard his cell phone ringing so he patted the railing of the hotel balcony and walked inside to get the phone.

“Hey Peter,” Johnnie said as he sat on the couch.  He stretched his neck, trying to get comfortable so it didn’t feel like someone rolled a boulder onto his head.

Peter O’Neil had been the manager for Chasing Cross since their first demo was picked up by S-Hallow Records eight years ago.  He had been like a father figure to the guys in the early days and now he was all business, all the time.  He understood the changing music scene and could negotiate like a vicious animal, sometimes walking out on meetings that should have resulted in the band losing their deal.  But it never happened.  Peter always got his way.

“It was a good time,” Johnnie said.

“You sound like hell.  You get coffee yet?  We have to talk.”

“Don’t bother.  I think Davey broke the television in his room.  We’ll call it even.”

“Christ.  You guys have to stop giving him whiskey.  He’s not twenty-two anymore.”

“If I’m feeling old, then you must feel dead.”

Peter laughed and then Johnnie heard the sounds of papers shuffling.  “Listen, Johnnie, I need an answer soon.  We have to decide on the charity show and then that contract I talked about...”

“Ten minutes.  There’s a place called Seven C’s about a mile from you.  Sort of hidden.  You be the same way.  And bring security.”

Peter hung up and Johnnie rubbed his face.

Funny what music and fame could do.

No matter what Johnnie needed to mask himself up a little.  It didn’t take much to gather a horde of Chasing Cross fans.  They could appear from nowhere and swarm.  In some cities, fans were calm and collected.  They treated Johnnie like a normal guy.  In other cities, it was like a riot.