Read All For Anna Online 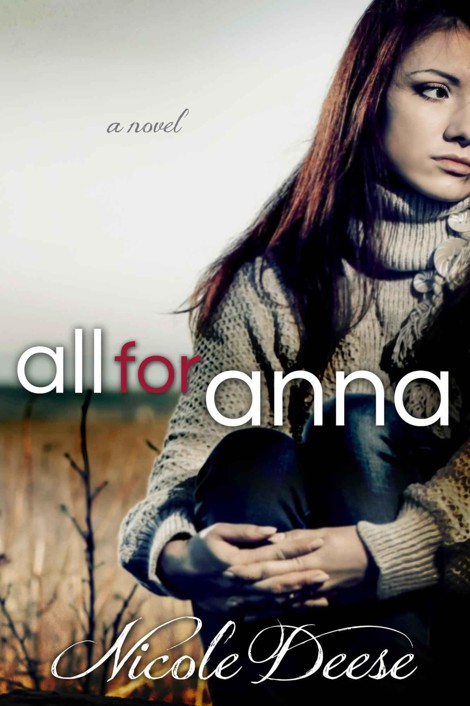 
By
Nicole Deese
This book is a work of
fiction. Names, characters, places and incidents are products of the author’s
imagination or are used fictitiously. Any resemblance to actual events or
locales or persons living or dead is entirely coincidental.
Copyright © 2013 Nicole
Deese


DEDICATION
All for Anna
is dedicated to those who have known the heartache of loss, the
heaviness of guilt or the hopelessness of shame.
May the healing that comes
through recovery find you as it has found me.
PROLOGUE

The church was packed;
standing room only.

Who would have imagined
a child could affect so many lives in only six years? I stood toward the back,
shoulder to shoulder with my sister and Jack. They practically pinned me in
with their close proximity. It was almost as if they knew my plans of escape.
My heart pounded loudly; the beat seeming to come from within my ears, drowning
out the music that played over her slide show.

I knew she had been
beautiful; though the body I remembered looked very little like the healthy
girl who was pictured here on ponies and scooters or wearing pjs and tutus. Her
smile had been mesmerizing and her eyes so full of life and future dreams. Her
blond hair, long like Cinderella, was shiny and spotless, bouncing with each
move she made in the home video.

The video was a stark
contrast to the mud splattered, bloody hair that I had pushed off her face
before administering CPR. The innocence that same face and body exuded on the
screen was unbearable to watch, at least for me. I felt my knees start to give
out, but willed myself once again to stand strong. It was the least I could do
to honor her memory.

As the screen faded to
black, the pastor introduced several family members to take the stage. My
breath caught when I saw her: Johanna, Anna’s mother. She made her way to the
top of the platform. The movements of her crutches were slow and precise.
Guiding her carefully up each step was the man I presumed to be Anna’s father.

I shrunk down a few
inches to conceal my identity in the crowd. The whispers and finger-pointing
during the last couple of days had been hard to swallow, but as the only guilty
party in this horrible tragedy, they had not been misguided. Even so, I would not
allow for that distraction today.

Though I had been
invited by her, I felt like an impostor the second she addressed the crowd,
reading from her letter on the podium.

“Dear loved ones;
family and friends of Anna…”

I was neither of those
things

She read on, making
note of the kind gestures that the community and church members had provided
for them in the last week; the week her world had been turned upside down. Her
sweet smile was behind every word she spoke, even though tears flowed down her
rounded cheeks. Briefly, I envisioned a rainbow captured by the slightest hint
of sunlight and unhindered by the dark rainstorm still present overhead. That’s
what Johanna was: a rainbow amidst a storm. Something raw and contagious tugged
at my heart as I watched her. More than mourning or grief, she seemed to have a
rare discernment, one that made me deeply uncomfortable and claustrophobic.

I was the wolf in
sheep's clothing.

I looked up for just a
moment from the stain on the carpet I’d been staring at, when Johanna found me
and held my gaze. I was frozen.

“Though our sweet Anna
is gone...we know where she now resides. May her life be a reflection of love,
forgiveness and grace. Even in the darkness there can be light, and even in the
hardest circumstances we face, there can be hope.”

In an instant, I was
breaking free from the hold of Jack and Stacie and running for the exit door.
The usher opened it for me quickly, but even in the fresh April night air I
choked with panic. My body shuddered and convulsed with insurmountable force. Breath
could not fill my lungs quickly enough. My heart slammed against my chest over
and over to the point I wished it would just explode, taking me with it.

A minute later, hands
were on me, pulling me to the curb.

“Tori, what’s going on?
What’s happening?” Jack asked, helping me sit as he pulled me closer to him.
Stacie smashed herself onto my other side.

I couldn’t answer; my
body was not my own.

She shouldn’t have
died.

Why was I spared? Why
wasn’t it me?

“You’re fine now Tori,
you’re safe. It will be okay, you
will
get through this,” Stacie lulled
in my ear.

I couldn’t save her.

I let her die.

Another wave of
hysteria ripped through my body, this time bringing fresh, hot tears with it.
My body shook with sobs that did not seem human; sobs that I could not control.
Sobs that would never change the outcome of the innocent life lost. I knew in
those few intense moments of clarity that life as I had known it had forever
changed. My tears would only serve to obstruct the pain and hold back my will
to survive.

Guilt had a way of
replacing one’s natural survival instinct with a purpose of its own; a purpose
that would never right the past, but if allowed, would dictate the future.

There was but one purpose to the future I now
called my own: to give it
all for Anna
.

I sat picking the
invisible lint off my perfectly pressed indigo scrubs. The waiting room was
like any of the others in the hospital, except smaller and more isolated. To my
left were a private staff lounge and a large conference room that held
discussions of lengthy experimental procedures and drug trials, or the
occasional lecture given by some uppity doctor with more letters after his name
than I cared to count. To my right was a hallway. I leaned my head against the
wall and recited the mantra that I had practiced for every interview Human
Resources had scheduled me for.

This was my last hurdle
to get over. Though I had already been guaranteed the job, thanks to my good
references and
resume, interviews made me anxious. I
wondered, briefly, if a psych interview was standard for every Trauma RN who
was hired at Dallas Northwest. But even if it was not, I would do as I always
did, regardless of what she asked: minimal answers, facts only. I breathed in
deeply, already feeling the perspiration on my palms.

Only facts, I can do
this
.

A loud clicking sound
echoed in the hall to my right, stopping in front of me. I lifted my head.

“Yes?” My throat was
suddenly dry and scratchy.

“I’m Dr. Crane, please
follow me. Next time, feel free to come right in through this door at your
appointment time. I have a private waiting room attached to my office. There’s
a couch inside that I think you’ll find much more comfortable than the chairs
out here.”

“Thank you.” I followed
her obediently.

Two things I learned
from Dr. Crane in that short introduction: that she was already planning a
second appointment, and that she seemed to pretend my level of comfort was her
utmost priority.

Passing through the
“couch room”, I entered a dimly lit office full of modern furniture that I was
positive came from IKEA. The white-noise machine was set to a low hum in the
corner and was almost hidden by the overgrown plant that reminded me of
something I’d seen in the movie
Jumanji
. In the other corner stood a
long, chrome light that was bent in a very unnatural way, defying gravity as it
swooned over a hard leather sofa.

Her
chair was a perfect
fit to what I had observed of her thus far. A mirror image, if there could be
one between human and chair: tightly fit, perfectly proportioned, no frills, no
cushion and no flexibility. She sat and cleared her throat, forcing a tight,
awkward smile.

“Well, Ms. Sales, it’s
nice to finally meet you. Dr. Bradley had many wonderful things to say about
you when she called me a couple weeks ago regarding your transfer. I was sad to
see her relocate to Arizona Medical after all her years here at Dallas
Northwest, but she seems to be quite content there in Phoenix,” she paused
momentarily nodding in my direction. “I hope your transition to Texas is as
beneficial.”

Her eyes were kind, but
her voice indicated that there was much more than my list of positive
attributes she would be discussing with me.

“Thank you,” I said,
trying to calm my rapidly increasing heart rate.

“Dr. Bradley and I met
way back in med school and strangely enough, we both ended up here in Dallas to
do our residencies. It’s actually quite an interesting story...”

She stopped short as my
expression apparently did not change enough for her to recount it to me. I was
relieved. I had no interest in hearing about her
glory days
with Dr.
Bradley—although on second thought, maybe it would be better to keep
her
talking so that I wouldn’t have to. I opened my mouth to ask her more about her
reminiscing, but it was too late. Her hand had already reached for my file and
it now lay open on her lap.

“The important thing,
Ms. Sales, is that Dr. Bradley has recommended that you see me before starting
your new position at this hospital. Although she spoke highly of your abilities
as a trauma nurse—which is really saying something for a woman of your age—she also
had some concerning observations,” she said.

Yes. Not only is it a
priority of mine that the staff at this hospital be in a place of mental and
emotional well-being, it is a necessity in a position like yours. After
reviewing your file and speaking with Dr. Bradley, it is my recommendation that
you complete a minimum of six sessions with me.”

Her words felt weighted;
hitting me like a surprise punch to the gut. I worked hard to process them. My
mind was in overdrive.

“I’m just a little
confused, Dr. Crane. I was told I have the job. I was already given a start
date. Is this a new condition to my hiring?” I asked, feeling my face flush
with heat.

She leaned in, studying
me carefully before she spoke. “This may not be standard protocol in the hiring
process Ms. Sales, but it’s my job and my responsibility to make sure that all
medical staff at this hospital are in a healthy place in regard to their mental
and emotional stability. To hear anything contrary to that, especially from a
colleague I greatly respect, is to put this hospital, its staff and its
patients at risk.”

The heat that had
warmed my cheeks now burned hot in my chest. The logical explanation she gave
was not the reason for my fury, but the person behind it was: Dr. Bradley. I
could say nothing, but inside my mind a battle raged.

Why did she do this to
me?

“You may start your
first shift on Monday as planned, but you will not be fully released with
privileges at this hospital until I sign off at the end of our sessions. That
means, specifically, that you will not be allowed to work any extra shifts or
hours in the meantime. It sounds like that will be quite an adjustment for you,”
she said, a faint smile on her lips, “I have the time right now if you’d like
to begin your first session today?”