Read AWOL with the Operative Online

AWOL with the Operative 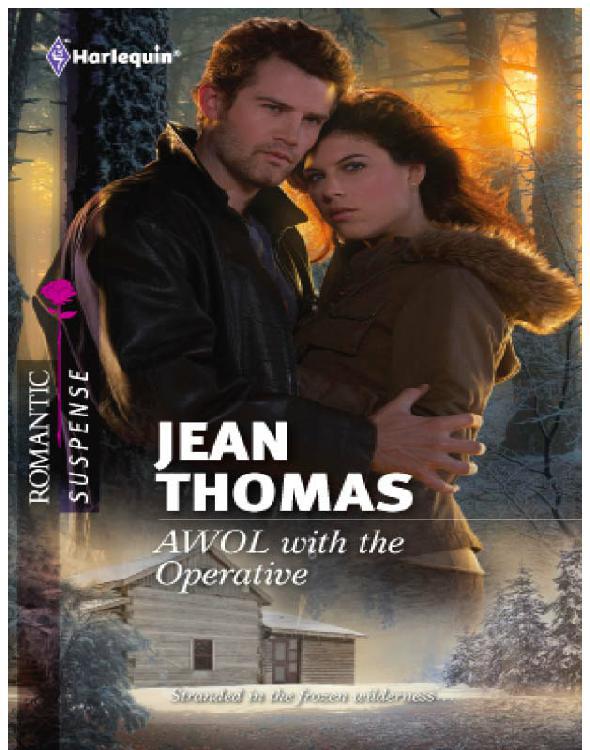 “My lips are sealed.”

Eve Warren made a sworn promise—she’d never tell the FBI her real connection to mob informant Charlie Fowler. When he’s found dead, we-have-ways-to-make-you-talk agent Sam McDonough wants to know everything. But as the gruff, gorgeous G-man escorts Eve from the Yukon for questioning, their chopper is shot down, crashing in the frozen Canadian wilderness. Suddenly, Sam’s memory is gone—and he’s not the same man.

Sam doesn’t remember much, but he trusts this “angel” by his side. As he and Eve battle the elements—and dangerous thugs determined to kill them both—he knows their survival depends on the most tentative trust…and huddling very close together for warmth.

Their reunion was simultaneously sweet and savage as Sam covered her face with kisses.

Eve had never experienced such wonderful kisses. Feverish kisses of relief. Kisses of two souls seeking a fulfillment beyond just the physical.

“I was terrified they’d caught up with you,” she said. “That you were dead.”

“Would I do that to you? Never. I managed to outrun them.”

“Where—” Eve sucked in her breath as his mouth traveled to her jaw, then her cheeks. She exhaled slowly, weakly. “Where are they now, do you suppose?”

“Gave up for the night, I imagine, and returned to their chopper. What else could they do?”

His lips had found her eyes, which she’d closed to accommodate him. He tenderly kissed each lid. Trembling, she croaked, “But they’ll be back, won’t they? They won’t quit.”

“Yeah, sooner or later they’ll be back.”

Is there any chance that, like me, you just can’t get enough stories about two people on the run from danger? I sure hope so, because that’s what I’m giving you in
AWOL with the Operative
. Of course, a story like this isn’t any good without a highly sensual romance. And although there are always the obstacles of a deadly enemy in pursuit to be overcome, there must also be the personal conflicts between hero and heroine that have to be resolved before they can earn that happily-ever-after they deserve.

There is another important ingredient in such stories—the setting. In the case of
AWOL with the Operative,
the setting is the frozen Canadian wilderness, where Eve and Sam have to deal with the enemy and learn how to survive in a hostile environment. Now that’s a challenge in itself. Are you up to it?

AWOL with the Operative

aka Jean Barrett, lives in Wisconsin in an English-style cottage on a Lake Michigan store bluff. The view from her office window would be a magnificent one if it weren’t blocked by a big fat computer that keeps demanding her attention.

The author of twenty-four romances was a teacher before she left the classroom to write full-time. A longtime member of Romance Writers of America, Jean is the proud winner of three national awards and has appeared on several bestseller lists. When she isn’t at the keyboard, she likes to take long walks that churn up new story ideas or work in the garden, which never seems to churn up anything but dirt. Of course, there are always books to be read. Romantic suspenses are her favorite. No surprise there.

To Betty Straus. Thank you, Betty, for your loyal readership through the years. It is deeply appreciated.

T
he first thing Sam noticed about her was the fear in her eyes.

Okay, maybe not the first. If he was going to be honest with himself, the first had to be how tantalizing those eyes were. That is, if a pair of eyes could be described as tantalizing. Hers could, he decided. Definitely. They were wide, framed by dark lashes and a pure, luminous green.

But, yeah, at the moment registering her fear. Understandable, he supposed, considering how her boyfriend had died. And now she was at risk herself. Or so Sam’s squad supervisor believed. Sam, himself, had yet to be convinced of that.

“Anything new on the case?” he asked the ruddy-faced RCMP officer, to whom he had just presented his American passport and his FBI credentials.

The young Mountie, standing protectively at Eve Warren’s side, shook his head. “We’re still investigating. That particular stretch of road can be real bad, especially in winter conditions. Either the accident was just that, an accident, or—”

The Mountie glanced at Eve, plainly not wanting her to hear the rest. But Sam could guess what he must have intended to say.

Or Charlie Fowler’s rental car was forced off the road and down that mountainside where he fell to his death.

“It was snowing, you see,” the Mountie explained, “and the tire tracks were no longer visible for us to read. But a witness on the lower road thought there was another car up there behind Fowler’s. If so, it disappeared from the scene.”

Sam gazed at Eve. If she was upset listening to what she must have heard already, it wasn’t visible on her face. Except for the fear that was still in her eyes. Other than that, she was silent. Just as she had been since Sam had introduced himself a moment ago when he had arrived in the lobby of the main lodge. They had been waiting for him.

Could be she was in a state of shock. Damn. He was in no mood to deal with anything like that. This situation was bad enough as it was.

The Mountie returned Sam’s wallet folder containing his picture ID and badge, which he tucked back into his coat pocket, along with his passport. “Unless there’s anything else, Special Agent McDonough, I’ll turn Miss Warren over to you.”

Sam nodded and addressed himself to Eve with a brusque, “You ready?”

Her voice was low and husky. And every bit as sexy as her green eyes, Sam thought. One more thing he was in no mood to deal with.

They both started to reach for her suitcase at the same time. Their fingers made contact. Sam swore he felt a jolt of current that was decidedly not static electricity shoot clear up his arm—something he was determined to ignore. She must have felt it, too. She quickly withdrew her hand, letting him take possession of her suitcase.

Eve thanked the Mountie for guarding her and accompanied Sam out the front door and down the steps to his waiting rental car. He stowed her bag in the trunk and saw her settled in the passenger seat. Then, before climbing behind the wheel, he did a fast check of the area to be sure it was secure. They were alone.

God, what a place for a high-class skiing village, he thought as he started the car and headed away from the lodge. April, and still as cold and white as mid-January. He supposed that was the point, to be located somewhere that would extend the season as long as possible. Yeah, but did it have to be in the Yukon wilderness, remote and isolated? Perfect for Charlie Fowler, though. A safe spot for his little tryst with Eve Warren. Or so Charlie must have believed.

The driveway out to the main road took them winding through the village’s colony of chalets. The chalets were presumably occupied by guests who preferred the small, Swiss-style structures over accommodations in the lodge.

“You and Fowler stay in one of those or in the lodge?” Sam asked the woman beside him.

“In a chalet,” Eve informed him. She didn’t point out which one.

Figures it would be a chalet, Sam thought. More privacy that way. And Charlie Fowler would have wanted as much privacy with her as possible. The FBI special agent would bet they never wasted a moment out on the ski slopes.

Sam didn’t blame Fowler. If he’d been holed up with a woman like Eve Warren, he’d want her all to himself, too. Or he would have before his life went all to hell. Now it was just a question of getting through each day without losing his sanity.

They had reached the main road. Sam turned right. When Eve realized which direction they were headed in, she challenged him with a startled “This isn’t the way to Dawson!”

“We’re not going to the commercial airport in Dawson.”

“Stop the car and turn around!”

Sam stopped the car. “Yeah, we can do that,” he said, not bothering to soften the sarcasm in his tone. “We can turn around and head for Dawson. That what you really want? To climb up over that pass where Charlie died?”

She didn’t respond, but when he turned his head to look at her, he saw her shudder with something like grief or dread. Maybe both.

“I didn’t think so,” he said without offering any sympathy as he drove on.

“Then where
are
you taking us?”

“To a small airfield used by private planes. I’ve arranged for us to be flown out of here by one of the bush pilots there. Any more questions?”

He shouldn’t have given her the opportunity. Should have known she’d have one. The woman was turning out to be a real pain in the ass.

“Because I’m a cautious agent, Eve Warren. If Fowler
was
murdered, then whoever killed him could be watching either that road or the airport in Dawson, just waiting for you to turn up. Okay?”

She must have been satisfied with his explanation because she offered no more objections. Not that he would tolerate them if she did. All that mattered to him was that she obey his instructions. The sooner he got her to Chicago and turned her over to his boss, the sooner he could walk away and get back to his life. What remained of it, that is.

He could see she was nervous, though. Her body went rigid every time they encountered an icy patch on the road, with the car starting to slide sideways before he corrected it.

Although he periodically checked the rearview mirror to make certain they weren’t being followed, there was no other vehicle either in front or behind them. They were on their own out here.

When he wasn’t concentrating on the road, Sam found himself sneaking glances at the woman beside him. Not wise. Not wise at all, but he couldn’t seem to help himself.

She was an eyeful all right. A mass of russet-colored hair, creamy complexion, a beguiling little cleft in her chin and a full mouth that…well, a mouth that could only be described as lush.