Emilio Largo was a force to be reckoned with as ‘Number 2’ in
Thunderball
. Italian actor Adolfo Celi played the villainous Largo, who used his talents well as head of extortion operations at SPECTRE. Fleming described Largo as a ‘ruthless Neapolitan black marketeer and fence who moved to riskier and more profitable ventures on the international crime scene’, and his black eye patch gave him a certain evil
je ne sais quoi
. Adolfo also had quite a strong accent and his voice was dubbed by Robert Reitty.

Blaxploitation movies were fast becoming popular in 1970s cinema, and screenwriter Tom Mankiewicz thought it would be very daring to use black villains in
Live And Let Die
, especially with the Black Panthers and other racial movements being very active. The ‘swinging sixties’ had romanticized the use of soft drugs, but in the early 1970s it was taken a step further by drug barons and counterculture. This all combined for an exciting plot in which Jimmy Bond tackled the drug barons head on, or at least Harlem drug lord Mr Big, whose plan was to distribute the world’s largest cache of heroin, free of charge, on the open market. It would drive other drug cartels out of business, increase the number of addicts, and give Mr Big and his alter ego, poppy-farming Dr Kananga, a monopoly.

As director Guy Hamilton was a jazz fan, he suggested filming in New Orleans and decided to use an opulent New Orleans jazz funeral as the starting point in the film, and as a cover to enable the villainous Mr Big to make a few agents disappear. Then, while searching for Kananga’s island retreat (in Jamaica), the crew discovered a crocodile farm owned by a certain Dr. Kananga (after passing a sign warning that ‘trespassers will be eaten’). The farm was incorporated into the script and that inspired Mankiewicz to name Mr Big’s alter ego after the owner. 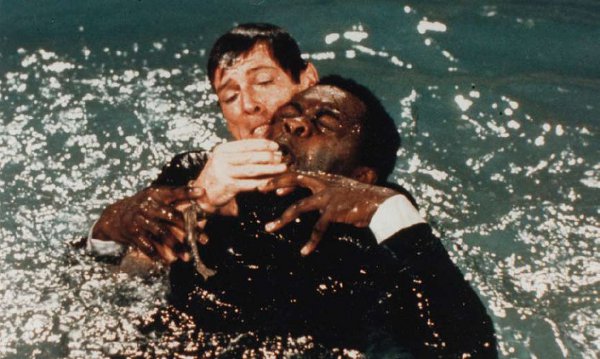 Maybe a spoonful of sugar would have persuaded Mr Big (Yaphet Kotto) to swallow this deadly pill?

Yaphet Kotto was cast as Kananga/Mr Big, the first (and to date only) African American villain in a 007 adventure.

For my second outing, my old pal – and Ian Fleming’s cousin, as it happened – Christopher Lee was cast as my opponent, Francisco Scaramanga, aka
The Man With The Golden Gun
. Christopher and I had worked together on a film called
Trottie True
right back in 1949 when I was starting out, and then again in an episode of the TV series
Ivanhoe
in the 1950s. 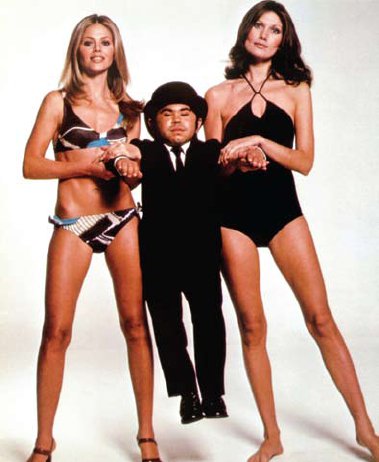 Nick Nack (Hervé Villechaize) was the diminutive hired help of Scaramanga, and as this photo indicates, he was quite a ladies’ man. 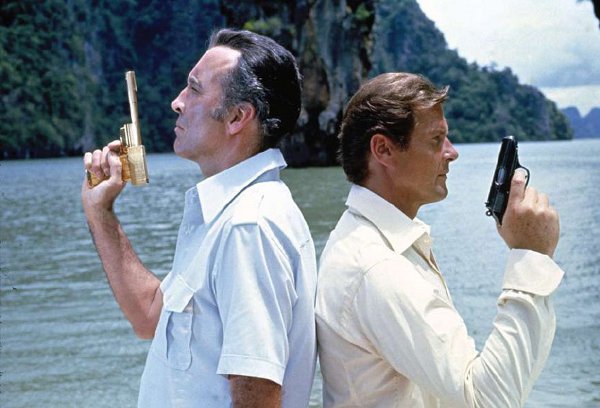 In
The Man With The Golden Gun
I faced up to my old friend Christopher Lee.

On
The Man With The Golden Gun
I used to tease Christopher mercilessly about his role as Dracula and, just before the director called ‘Action’, I would lean over and say, ‘Go on, Chris, make your eyes go red!’ 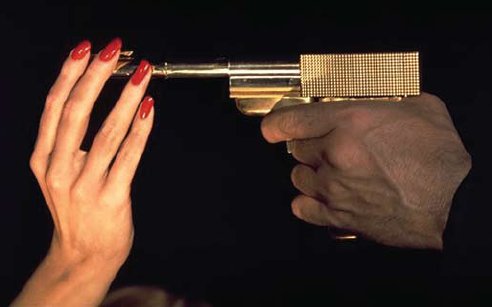 A rather provocative poster image for the film, featuring Christopher Lee’s hand. 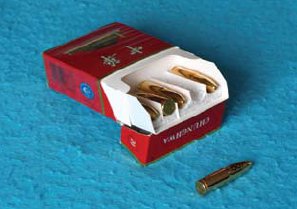 Remember the bullet with 007 on that arrived in M’s office? Well, it was a custom-made, 4.2-millimetre, golden (23-carat gold with traces of nickel) dum-dum bullet.

Then there was the time we first entered the mouth of the cave on James Bond Island, which was replicated back at Pinewood as Scaramanga’s HQ. A mass of bats flew out towards us. Without flinching, Christopher held up his hand and said, ‘Not now, Stanislav!’

He looked sheepishly at me and said, ‘You’re going to use that against me, aren’t you?’ 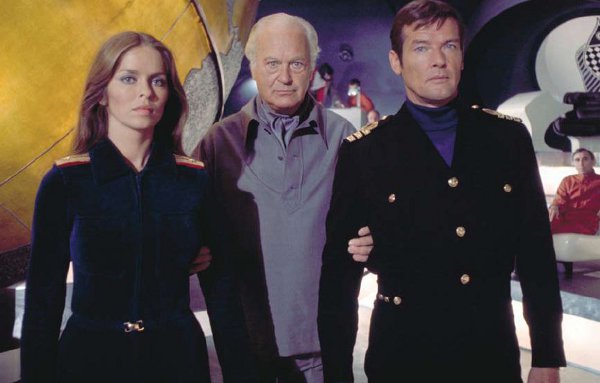 Karl Stromberg (as played by Curt Jurgens) in
The Spy Who Loved Me
, one of my more charismatic adversaries. Note the vice-like grip in which he holds both me and Barbara Bach-to-Front.

Scaramanga is assisted by the diminutive Nick Nack, as played by Hervé Villechaize. Dear Hervé was a fun character – and sex mad! I asked him how many girls he’d had while we were shooting in Hong Kong.

‘Forty-five,’ he replied in his squeaky French voice.

‘Even when I offer to pay sometimes they refuse me,’ he added sadly.

He trotted up to Maud Adams in the lobby of the Peninsula Hotel in Hong Kong one morning, tugged on her knee-length skirt and looked up to say, ‘Maud, tonight I am going to creep into your room, climb under the duvet and make mad passionate love to you.’

Unfazed, Maud replied, ‘If I find out you have, I’ll be very cross.’

Karl Stromberg was very nearly a member of SPECTRE, as I mentioned earlier. However, his bizarre undersea ideology was enough to make him a stand-alone villain, especially with his quirky webbed fingers. Curt Jurgens played Stromberg, and we became great friends. He introduced me to Gstaad, and when I realized I’d have to find a home outside of the crippling UK tax regime, he offered my family and me his chalet in the Swiss resort to see if we’d like the town. We did, and moved there.

THE TALLER THEY COME …

Every good villain has a good henchman, of course. The most memorable of all has to be Jaws, as played by my good friend Richard Kiel.

Richard, who stands seven foot two and a half inches tall, was cast after script supervisor June ‘Randy’ Randall saw him in an episode of the US TV series
Barbary Coast
. She knew the team was looking for a very tall actor – and they didn’t come much taller than Richard.

When we filmed the scenes among the ruined Karnak temples in Egypt, Lewis Gilbert told Richard that for one shot he needed to be up in the scaffolding, high above Jimmy Bond. Richard went pale, and said he suffered with vertigo. ‘Hey, I don’t even like being this tall!’ he exclaimed.

Faced with what seemed an insurmountable problem, my stunt double, Martin Grace, said he’d impersonate Richard, and used pieces of orange peel wrapped in tin foil for Jaws’ ‘metal’ teeth. As it turned out, Martin mimicked Richard’s every move so well that when Richard’s mother saw it she asked him how on earth – with his fear of heights – he managed to film that sequence. She wouldn’t believe it wasn’t him. 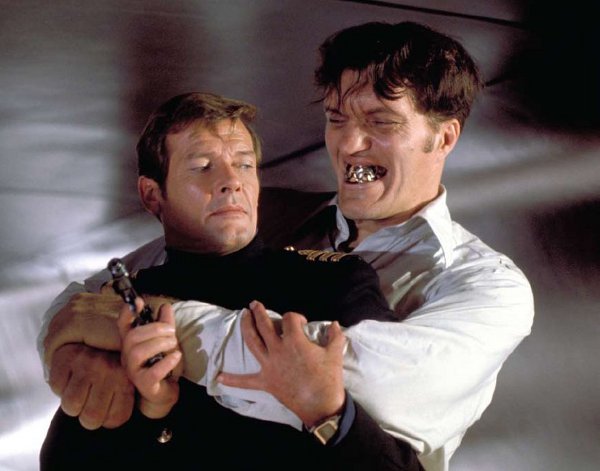 Richard Kiel as Jaws was voted the best Bond villain in a recent poll.

Of course, Jaws got his name from the ominous, glinting steel teeth he wore. Poor devil, they were so uncomfortable to wear – Richard could only keep them in for about half a minute at a time. The comical expressions he had to convey were quite the opposite of what he was feeling, with an overwhelming urge to gag! 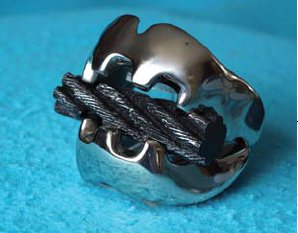 His teeth could munch through solid cables – if he’d had his Weetabix.

Heir to the Sundered Crown by Matthew Olney
In the Heart of the Canyon by Elisabeth Hyde
Redemption by Gordon, H. D.
616 Todo es infierno by David Zurdo & Ángel Gutiérrez
Skin in the Game by Sabrina Vourvoulias
Hot Summer Bites: A Castle of Dark Dreams Novella (A Penguin Special from Berkley Sensation) by Bangs, Nina
Mahjonged (An Alex Harris Mystery) by Macko, Elaine
The Second Wave by Leska Beikircher
Nightwalker by Allyson James
Revenge by Joe Craig