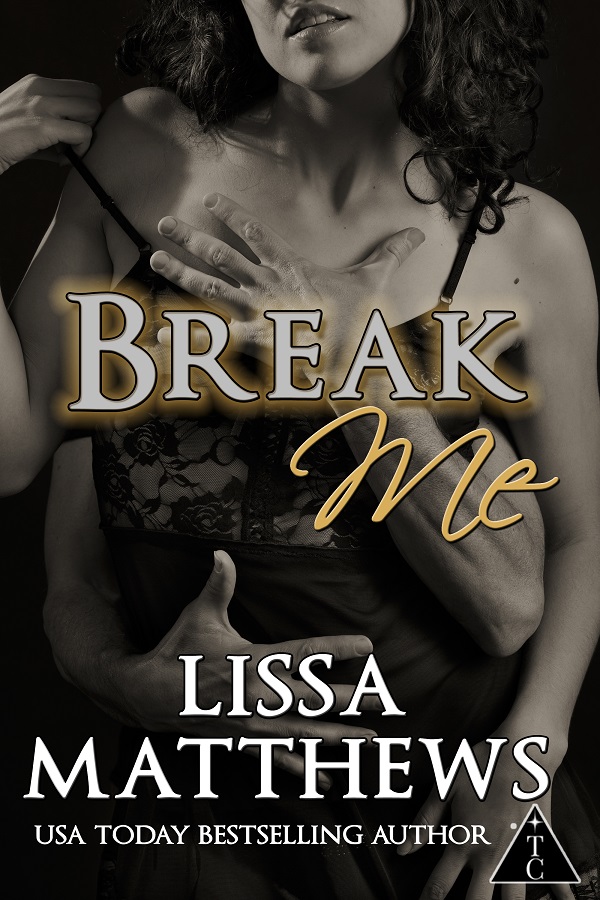 Thank You For Reading 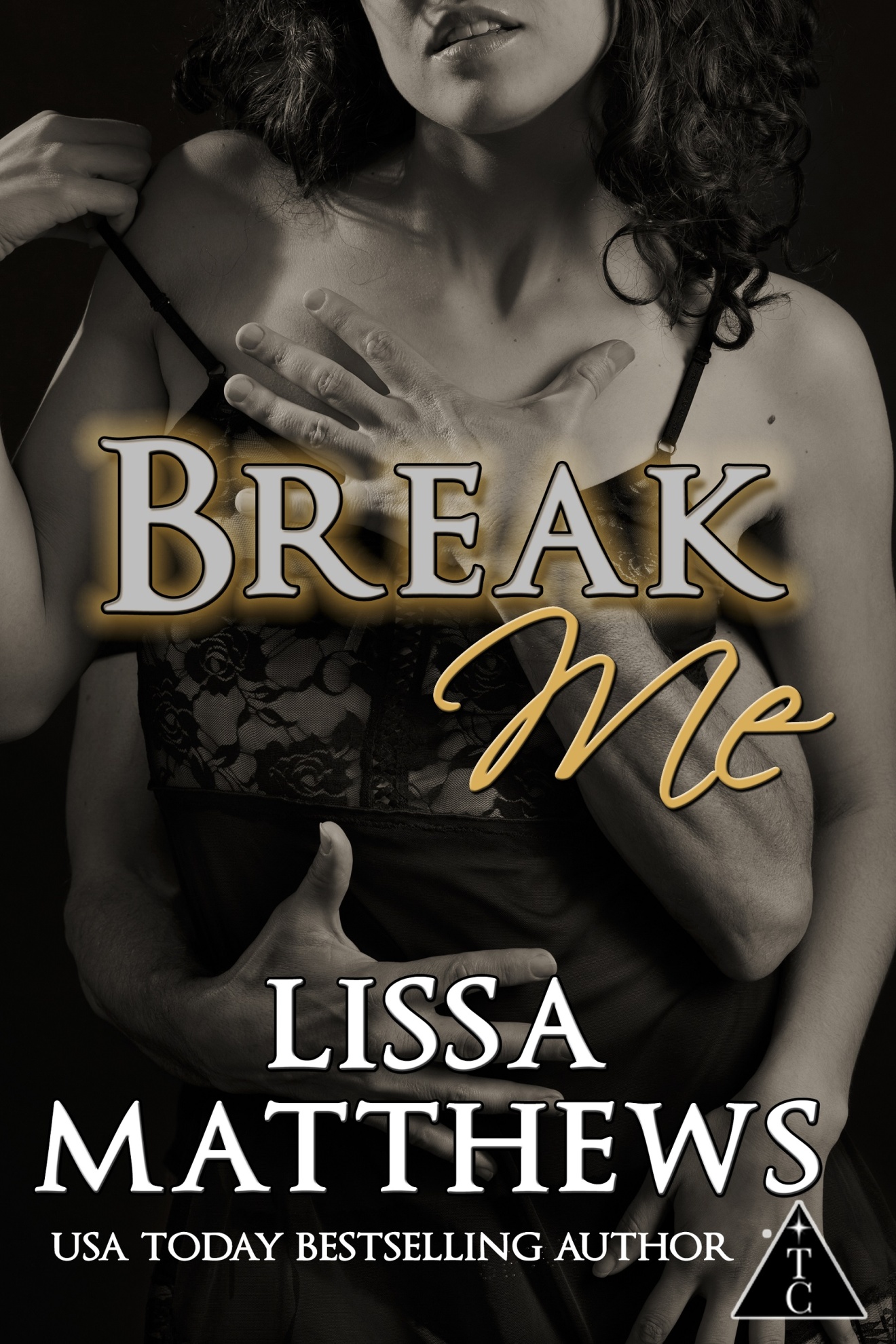 Thank you for the lessons learned and for believing in me.

Thank you for helping me break.

This isn’t the version you first read, but thank you for telling me I could write this story... One day.

I waited on him. It was my job. Or one of them. I owned the businesses, both bookstore and café, so my jobs were numerous and unending. I could have let someone else, the only other someone else who was in the café working with me wait on him, but I didn’t want that and I didn’t want to question it. I wanted to wait on him. I wanted to serve him the cup of coffee, black with one ounce of heavy cream, no more and nothing less. I wanted to be the one who set it in front of him, who received his smile and nod of approval, his satisfied sigh when he took his first sip. I wanted all that. For me.

I wanted none of it. I didn’t want to need that feeling deep down in my soul that I’d pleased someone. Him, only him. I didn’t want to feel anything again. Not for a man like him. I didn’t. I couldn’t. I wouldn’t. I’d vowed it, sworn it, done everything but write it in blood. But he walked in three months ago and I knew. I fucking knew in my gut there was no turning back. Not when he looked at me like that. Not when the corners of his lips tilted up or the desire lit his bright blue eyes when he saw me.

I was lost and he found me when I didn’t want to be found.

“Will that be all?” I asked the question each time I brought him coffee. And each time, he gave me the same response.

I quickly bit my tongue. All the words were the same with the exception of Sir. It slipped out, unwarranted and unwanted and completely perfect. I hadn’t used the term over two years. I promised him… No. I sighed inwardly at the lie. I’d promised
myself
I wouldn’t use it ever again. Not with anyone.

The man seated at the table smiled over the rim of his coffee cup and his eyes darkened in a way that caused my thighs to squeeze together, my belly to roll with need, and my palms to sweat. I knew he wanted me, and I knew I wanted him, but this was more than simple lust. And my saying the word Sir, admitted it to both of us.

“Why do you always say that you want me to sit with you?” I had an inkling, but until he said it, it was just that. However, once he did, it would be real, as everything was when spoken aloud.

It was something I’d always known, deep down inside, but had never thought about until that January day two years ago. If they didn’t speak the word, it couldn’t have been real, so I avoided them, the people and the word, existing in denial as long as I could. It hadn’t been long enough when I emerged and let it sink in.

He was and I wanted to be.

My heart lurched in my chest and my throat threatened to close off all air from my lungs. I grasped the edge of the table to keep myself from falling. He reached out, but I stumbled back before he could touch me.

I loved my name on his lips, even as I hated him knowing my name at all. To hear it uttered with concern, as though he cared, nearly broke me. “H-how do you know about him?” I whispered the question around the thickness of my tongue and through my dry lips.

“The Club,” he said softly.

The Club
. I closed my eyes. No one was supposed to speak of it, to mention it outside the doors, but him saying it… Those two words evoked so many powerful memories and desires. The room spun and my world tilted. I’d forced myself not to think about
The Club
, not to remember its existence. Since that night, I’d driven out of my way so I wouldn’t be anywhere near it, so I wouldn’t be tempted.

“They had no right.”

“They didn’t. I saw the pictures on the wall downstairs. I did ask, once. I was told you were no longer owned, but for more answers than that, I would need to ask you. I was also told I likely wouldn’t get very far.”

“But that’s why you’re here. Why you’ve been coming in here all these months?” He definitely wasn’t the usual Club member. He was blue collar whereas most that I’d known had been wealthy, elite, privileged. I wanted to ask how he’d learned about The Club, how he’d gotten invited being that he was outside the norm for them, but I kept my curiosity about him to myself as I waited for his response.

He was too young to use words like enchanted. I wanted so badly to smile, to enjoy the fluttering going on inside my body at his admission to wanting me, whether he knew me or not. I wanted to revel in the very real fact that
I
wasn’t dead inside.

But I couldn’t. That would be a betrayal. Saying Sir had been bad enough. Giving in to the pleasure of being wanted, even if I was the only one who knew, was another kind of betrayal altogether.

“I think you should go,” I told him, not meaning it at all. I liked looking at him, hearing the Southern twang of his voice. He wasn’t from around here. He’d told me that the first day he came in. Said he’d moved from Virginia, first to Dallas, then to Karim once he’d been discharged from the Marines.

“I think you want me to stay.”

I did. I wanted him to stay, but he needed to go. I wasn’t ready. It was possible I would never be ready. Not for him. Not for anyone.

I closed my eyes, removing him from my sight, and shook my head. “No.” I lied without conviction and he knew it. His chair scraped the floor as he stood and he reached my personal space in less than a heartbeat. I could feel his heat, the fan of his breath. He didn’t touch me, not a single strand of hair on my head, but he might as well have.

I couldn’t explain my reaction. From the moment he’d wandered into my café, I knew something was about to happen, that the air was charged differently than before he’d walked in.

Today was the first day either of us had actually acknowledged it.

“You do, Claire.” His voice was a hiss against my ear. “You want me to stay and you want to tell me.”

“Yes. You want me to know and you want to be free of the heartache that’s written all over your pretty face.”

“Stop.” Tears clogged my throat and my heart thudded hard against the wall of my chest. Heat suffused me from the inside and I didn’t know whether I wanted to cry or scream or fall to my knees at his feet.

Instead, I gripped the edge of the table behind me and held on for dear life.

“I’m not going to stop, Claire. Not until you let go and let it all out.”

Silence stretched between us, but I knew he hadn’t gone.

“On one condition. Ask my name.”

“Then I won’t be leaving.” He took a slight step back and leaned against the table he’d recently vacated, arms crossed over his chest.

We stared at one another. He really wasn’t going to go if I didn’t ask. The look in his eyes, his casual stance told me he’d stay until I locked up for the night if I didn’t ask. It was a simple enough thing, quick too. Just ask his name and he’d leave. It’s what I wanted and even I didn’t understand my stubbornness over something so small.

Yet, it wasn’t a small thing. It wasn’t an innocent thing. It was large and significant which, if I had to guess, was what he was going for. My acknowledgment of it, of him. He wanted to get in my head, wanted to not be the nameless customer. He didn’t want to be anonymous. He wanted to be someone to me.

He wanted to be the name that came to mind, that I whispered on the tip of my tongue.

I didn’t need him to tell me any of it because it was what I wanted, too.

And I hated us both for it.

In the end, though, I resigned myself to my fate. “What’s your name?”

His smile took my breath away. “Jared. Now, you say it.”

“Jared.” It rolled off my tongue the way a name you’ve been saying your whole life does. I sighed with sadness.

He stepped close again, though still without touching me. “Good girl, Claire,” he praised. “I’ll be back tomorrow.”

“You can’t keep me away. Not when I know you want just the opposite.”

“You lie a lot, you know that? And you’re not very good at it. We’ll have to correct that behavior.”

“There won’t be any correcting.” I finally found my voice again. Strong, if not exactly steady, but it was there. I stood up straight, which forced him to do the same. “And even if correction was necessary, it’s not your place to do it.”

Arrogant son of a bitch. I bit the words back, but they were itching to fly from my lips. “Not ever,” I countered.

“There’s a feisty girl behind all that sadness. Good. I’ll be back tomorrow, Claire.”