Bring Me A Dream: Reveler Series 5 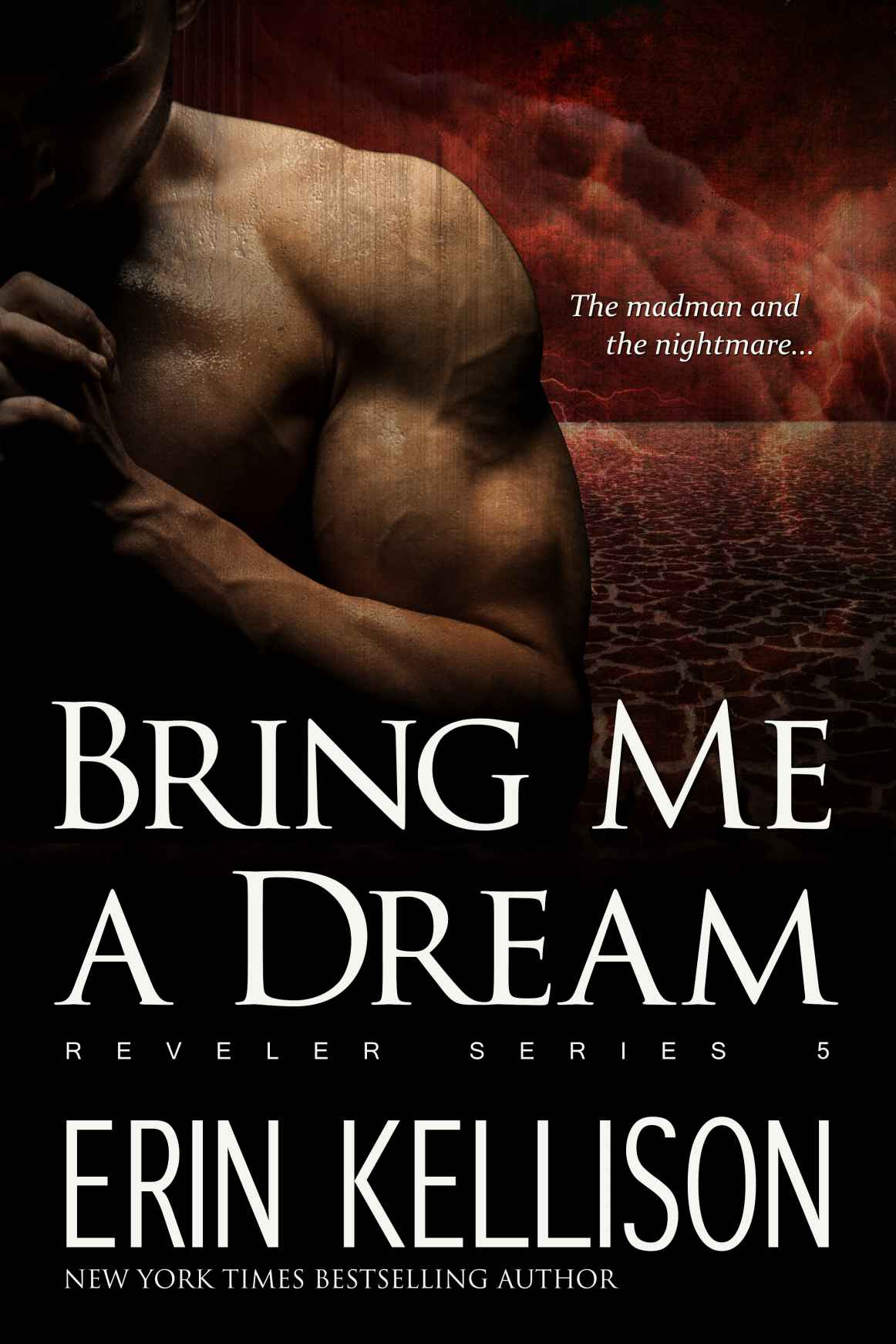 BRING ME A DREAM

The madman and the nightmare…

Vincent Blackman is a little…unhinged. He recently fought a nightmare from the world Darkside and won. Now he fears nothing and wants revenge on the man who had his father brutally murdered. And how convenient to find an ally in Mirren Lambert, his enemy’s gorgeous and sexy daughter. Unfortunately, she’s made a few enemies of her own.

She might be a nightmare, but she’s also his ultimate fantasy.

Mirren was born half human, half nightmare. She was on the run from her ruthless father, but when he abducted her young son, she knew he had to be stopped once and for all. Dangerous Vincent is just who she needs to help her, though she has a perilous part to play as well, infiltrating her father’s circles to discover his secrets. They learn something dark is stirring in the dreamwaters, and it’s reaching toward the waking world. Vincent might be holding on to the last of his sanity, but that’s okay, as long as he holds on even tighter to her.

Bring Me A Dream
is the fifth installment in the Reveler serial, a hot paranormal romance set in a world where shared dreaming is a new pop culture phenomenon that allows people to indulge their wildest fantasies. But there are also unknown dangers Darkside; nightmares are slowly infiltrating not only dreams, but the waking world as well. And behind them all is a shadowy entity called the Sandman.

To receive an email when Erin's next book comes out, please sign up for her
newsletter
. Every month, one random subscriber receives a $50 gift card to the e-book retailer of his or her choice. The newsletter is for new release info only and the list is private - Erin hates spam.

BRING ME A DREAM

Note from the Author

Other Books by Erin Kellison

They stood in a child’s dream nursery—a specially designed Rêve that so closely resembled a nursery in the waking world, it might be mistaken for one…with the exception that the white, fluffy clouds painted on the ceiling actually coasted through the air overhead. And the trees on the walls were extra-dimensional, not just simulating height, width, and depth, but their leaves rustled with a degree of realism, too. A waking world nursery might approximate the charming dream version, but it could never be as wonderful. Any child who spent much time here would always be disappointed when he woke.

“So…you’re going to kill him?” Mirren was referring to her father, Didier Lambert, who’d kidnapped her young son. The boy had been recovered not five minutes ago, and she’d thrust the child into the arms of strangers in order to get him out of danger. The dreamwaters—the atmosphere of the world Darkside—carried her distress to Vince, but she wasn’t quarreling with his violent intentions. The danger to her son would persist until her father was stopped.

“Oh yes,” Vince said.
She
might be nervous, but he’d found a calm he’d never known. His vision was red, his heart high, as he anticipated the moment of his vengeance. He’d been quaking every day since he’d emerged from his ordeal in the Scrape, the great dust storm outside all dreamscapes.

Tonight was about fathers. Vince was going to kill hers for murdering his.

Interesting question. “I was thinking of ripping him apart.” It’s what Vince had done to a nightmare creature in the Scrape. Would its blood always stain him?

“My father will escape when he finds you here waiting,” she said. “Either he’ll wake up so we won’t be able to reach him…” They had no idea where Didier Lambert was in the waking world. It was only Darkside that they’d had a hope of finding him. “Or he’ll bolt into the Scrape.”

“If he bolts,” Vince said, “then we follow.” But what if Lambert did attempt to wake? “Can you hold him here?” He knew it was a long shot that she could restrain someone as strong as her father.

“I doubt it,” Mirren said. Vince had witnessed her restrain others effectively. She’d even tried to restrain him. He recalled how the ropes of sand had snaked up his body, but they hadn’t been able to hold him. He’d
changed
during his time in the Scrape. Changed in his blood, bones, and soul. He didn’t feel at all like the man he’d been before.

“I’ll only need a second.” He didn’t even recognize his own voice.

All his life Vince had tried his best to choose the light. His father had been the one who’d skirted the law, cut corners, who’d made deals with the wrong people—like Didier Lambert. Vince had barely survived, emerging stained with nightmare blood, harrowed by the Scrape wind, and bearing the realization that the light had been an illusion. He’d always been meant for the dark.

Mirren had been born to darkness, as well.

Vince glanced over to find tears wet on her cheeks, but her jaw was clenched, hands fisted.

He’d known many women but never one like her. Voluptuous and full of feeling, but hard, too, and jagged with it. She’d be able to do whatever needed to be done. Her straight pale-blond hair was as bright as her lips were red. Her dreamwater-dark eyes promised both fantasy and terror—she was a half-breed. Half human, half nightmare.

And that’s exactly what he’d become, too. His DNA might be all human, but he was a monster now, nonetheless.

She looked up, gaze training around the room. Was someone coming?

Vince shuddered as if on the brink of release. Maybe after Lambert was dead, Vince could find peace.

“Tie me up,” he told her. “Restrain me.” Lambert was expecting to find Malcolm Rook, a Chimera marshal who policed the commercial dreams and revelers Darkside and who’d escaped with Mirren’s child to the waking world. Vince was a stranger to Lambert, which suited their needs just fine. “Pretend you’re going to go through with trading Rook for your son’s freedom. At first glance, your father might assume I’m him.”

She inhaled, and at his feet, gold sand rose out of the nursery floor and wove into thick ropes that twined up his legs and crisscrossed over his arms and chest.

The sand was what dreams were made of, just transformed by imagination. It also rode the howling wind that raged through the Scrape. The nightmare part of Mirren’s heritage allowed her to control the stuff. But if dreams were made of sand, then everyone could manipulate it to a certain extent, too.

With a quick jerk of her head, he was roughly brought to his knees. A white-hot flare of
want
burned through his rage.
After
, he promised himself. After Lambert was dead, then Vince could have Mirren. Wrap himself up in her and drown the right way, in sex and lust and craving.

Vince heaved every breath. He wasn’t afraid; he was eager. The ropes abraded him with each gasp as he waited. The sensation was like Mirren touching him. Promising him.

Then finally, the dreamwaters shifted, coursing against him from a new direction. Someone coming. Someone here.

Lambert. It could be no one else.

Mirren answered him in French, and as Vince couldn’t speak the language, he had no idea what they said, but the dreamwaters—excellent conductors of emotion—told him all he needed to know: Mirren’s anger had overcome her distress. The waters were electric and snapping with it. But also spreading through the dream was her father’s sense of victory, sweet and warm.

Mirren’s words spilled over each other, her son’s name punctuating every sentence.
David. David. David.

Lambert cut off his daughter with a sharp, “
Ça Suffit!
”

Vince sensed a shadow stretching his way—Lambert approaching from behind. Could he feel the duplicity of his daughter? The rage rising inside Vince? The trap that awaited him?

Vince didn’t answer. He faked an attempt to strain his way out of the gold ropes that held him so tightly.

Vince didn’t really care as long as Lambert didn’t either.

A faint crackle of electricity itched Vince’s shoulder. Lambert reaching toward him? Vince surged up and around, the ropes of sand disintegrating and sliding off him like so much spilled salt.

Lambert’s mouth opened slightly with surprise, and Vince grabbed him at his lower jaw, fingers inside his mouth, thumb digging into the flesh under Lambert’s chin. Vince had ripped the jaw off the nightmare in the Scrape. Why not kill Lambert the same way?

Shock seemed to make Lambert stagger, and Vince used the moment to force him back against the nursery Rêve’s wall.

This was a dream, so there was no reason Vince couldn’t rip off his head with pure will power. Lambert had thrown Vince’s father out into the Scrape to be eaten by the nightmares that inhabited it. Nightmares were bad—Vince knew from personal experience—but not nearly as feral and vicious as he felt in this moment.

He looked Lambert in his nightmare eyes. Like his daughter, he wasn’t fully human.

“I’m
Vince Blackman
,” he said to make sure Lambert knew who was about to end him and why. Drool gathered in Lambert’s mouth, his teeth both blunt and jagged in Vince’s grip.

Lambert growled and bit down on Vince’s hand, which merely helped Vince secure his hold. Didn’t matter that hot, red blood rolled over his wrist—this was a dream. Pain registered, but it didn’t matter. With his free hand he took hold of the back of Lambert’s head and twisted it roughly to the side so that Lambert’s chin almost touched the wall at his back.
Die, fucker.

“Do it,” Mirren said. The anxiety had dropped out of her voice. She was steady, resolute.

Lambert’s eyeballs strained toward his daughter as black specks bled through the skin on his neck and jaw.

Vince’s blood ran freely down his wrist and in rivulets on his arm. The dreamwaters, usually lapping softly at consciousness, surged in violent waves.

The waters went wild around him, though the trappings of the nursery itself remained unaffected, artificially imposed as they were.

Then Vince was seized by the arms from behind and pulled back, but his grip on Lambert’s head didn’t falter. The nursery Rêve was suddenly full of Chimera—one, three, at least five of them. The dream police had arrived, and by striking at his joints, they conspired to collapse his balance. Likewise, Lambert wrung himself out of Vince’s hold and reeled backward, heaving for breath. He shimmered slightly, and Vince caught the hint of the illusion of normalcy returning to Lambert’s eyes. The blotches on Lambert’s neck similarly faded. He was hiding his nightmare nature from Chimera.