BOOK: Cam Jansen and the Basketball Mystery
>>DOWNLOAD HERE >>READ ONLINE NOW
ads
Coach Jenkins then whispered to Jordan Gold. He gave him some keys.
“Don’t forget me,” Danny said. “I also helped find the basketball. My buster joke helped Cam solve the mystery.”
“Yes,” Coach Jenkins said. “Bring three.”
Two police cars drove up to school. Four police officers got out of the cars. They walked into the cafeteria. Governor Zellner told them what Brian had done. 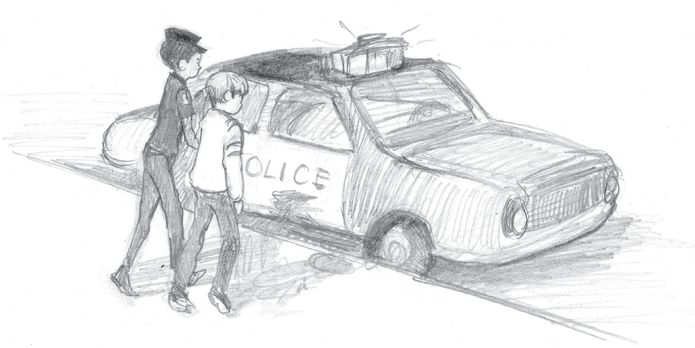 “Come with us,” one of the police officers said.
Brian left the cafeteria with the officers. He got into the back of one of the police cars. The two cars drove off.
Jordan Gold came back with the basketball and three orange Hamilton High School sweatshirts. The basketball was filled with air. It didn’t have wrinkles.
Jordan Gold gave the governor the three sweatshirts. A guard gave the governor a black marker. Governor Zellner signed each of the shirts.
The guard gave a shirt to Cam, Eric, and Danny.
Danny put on his shirt. He puffed out his stomach and said, “Hey, look. I’m an orange pumpkin.”
No one laughed.
“Oh well,” Danny said. “My jokes helped Cam solve the mystery. It pays to tell good jokes.”
Diane shook her head and said, “You mean it pays to tell bad jokes. It pays to tell real bad jokes.”
Cam and Eric laughed. Governor Zellner, Coach Jenkins, and lots of other people looked at Danny with his puffed-out stomach and laughed. Then Danny, the orange pumpkin, laughed, too.
A Cam Jansen Memory Game

T
ake another look at the picture opposite page 1. Study it. Blink your eyes and say,
“Click!”
Then turn back here and answer the questions at the bottom of the page. Please, first study the picture,
then
look at the questions.
1. Is Mr. Shelton wearing a hat? Eyeglasses?
2. How many people are in the Sheltons’ SUV?
3. Who is sitting directly behind Mr. Shelton?
4. What is the baby holding?
5. Are Eric’s twin sisters wearing shirts with stripes?
6. Who is holding Mr. Shelton’s yearbook, Cam or Eric?
ADS
15.4Mb size Format: txt, pdf, ePub

EDGE OF SHADOWS: The Shadow Ops Finale (Shadow Ops, Book # 3) by Lyons, CJ, Cooke, Cynthia
Manly Wade Wellman - John the Balladeer 05 by The Voice of the Mountain (v1.1)
Blind Side by K.B. Nelson
Seventeen Days by D.B. James
Imaginary Friends by Nora Ephron
Waking Up in Dixie by Haywood Smith
The Real Mason by Devlin, Julia
A Book of Death and Fish by Ian Stephen
In Desperation by Rick Mofina
The Mansions of Limbo by Dominick Dunne