BOOK: Cam Jansen and the Basketball Mystery
>>DOWNLOAD HERE >>READ ONLINE NOW
ads
Eric asked, “Are you sure he’s not on the team?”
Cam nodded her head. She was sure.
“I looked at the pictures I have in my head of every player on the court,” she said. “He’s not in even one picture.”
The Franklin players took plates of cake and ice cream and cups of juice or soda. But the short boy in the green and yellow jacket didn’t. He walked straight through the cafeteria.
“Look at that,” Eric whispered. “He’s walking right to the exit. That’s real strange. I’ve never seen a teenager walk past free cake and ice cream.”
“He’s leaving,” Cam said, “and we’ve got to stop him. I’m sure he knows something about the missing basketball.”
Chapter Seven

Cam and Eric hurried into the cafeteria. Cam quickly stopped by one of the tables. She took a plate, a large piece of cake, some melted ice cream, and a napkin.
“Get some juice,” she told Eric.
“But I’m not thirsty.”
“Just get some juice,” she told him again.
Eric filled a cup with apple juice.
The boy was almost by the exit. Cam caught up to him. She bumped into him and got buttercream icing and melted ice cream on his jacket.
“I’m so sorry,” Cam said. “I’ll wipe it off.”
With the napkin, Cam spread the icing and the ice cream across the back of his jacket. 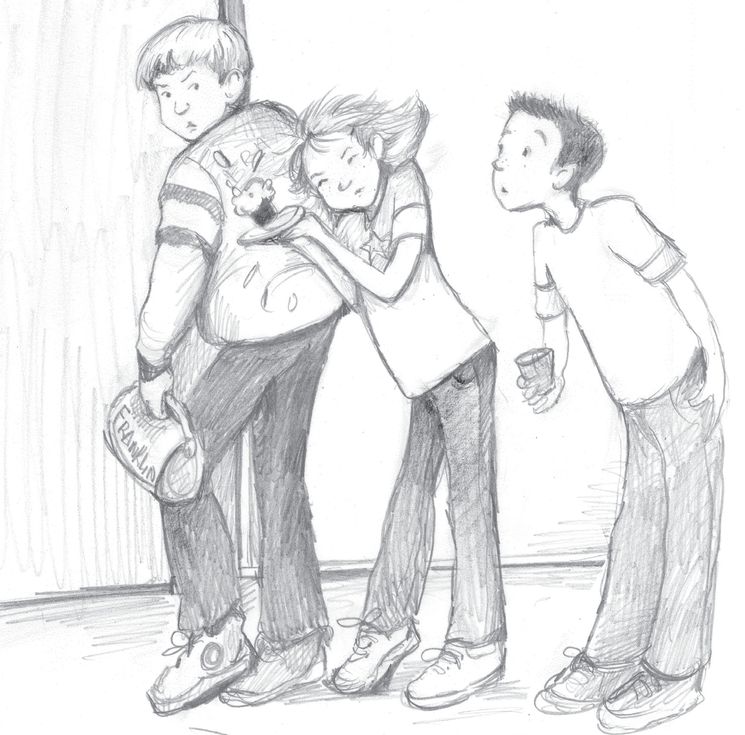 The boy twisted his head and looked at the back of his jacket. He turned and told Cam, “You made it worse.”
BRIAN was stitched onto the front of his jacket.
“Don’t worry, Brian,” Cam said. “I’ll wash it off.”
Cam took the cup of juice from Eric and spilled it on the jacket.
“Hey!” Brian screamed. “Now I smell like apples.”
The Sheltons hurried over.
“What happened?” Mrs. Shelton asked. “Why are you shouting? Did my son do something?”
“No,” Brian said. “It’s your daughter. She got cake stuff and ice cream all over my jacket.”
“Oh, she’s not my daughter. She’s a friend.”
“What’s the problem?” the Hamilton Helper standing by the door asked.
“This girl got cake and ice cream all over my jacket,” Brian shouted.
Mr. Shelton took out his wallet.
Coach Jenkins, Governor Zellner, three of his guards, and his two assistants came over.
“What’s wrong?” the tall red-haired assistant asked.
Brian looked at Coach Jenkins, Governor Zellner, his assistants, and the guards.
“I’ve got to go,” Brian said.
“No, wait,” Mr. Shelton said. “I’ll pay the cleaning bill.”
Brian didn’t wait. He rushed to the door. He seemed scared. He kicked balloons aside and ran out of the cafeteria.
“Stop him,” Cam told the governor’s guards. “He knows something about the missing basketball.”
Coach Jenkins asked, “What missing basketball?”
“Don’t worry,” one of the guards told the coach. “We’ll find it.”
“Find what?” Governor Zellner asked.
“The basketball you signed is missing,” the guard said. “It must have rolled off. We’ll find it.”
“No, you won’t,” Cam said. “If that boy gets away you won’t ever find that basketball.”
Cam, Eric, and others hurried to the door. They watched Brian hurry through the parking lot.
“Stop him!” Eric said. “We have to stop him before he gets away.”
“Did he take the basketball?” one of the guards asked.
“We think he did,” Cam answered.
Governor Zellner said, “We can’t stop someone because you think he did something wrong.”
Danny pushed into the crowd. He had two balloons and a sharp toothpick.
“Hey, Mr. Governor, do you know who I am?” Danny asked. “I’m ‘Buster’ Danny.” He pointed the toothpick at the balloon and said, “Watch this.”
“Not now,” Eric told him.
“Yes now,” Danny said, and pushed the toothpick into one of the balloons. “This is funny.”
Pop!
The busted balloon fell to the floor.
“That’s why they call me ‘Buster,’” Danny said and pushed the toothpick into the second balloon.
Pop!
The second busted balloon fell to the floor.
Cam looked at the two busted balloons. 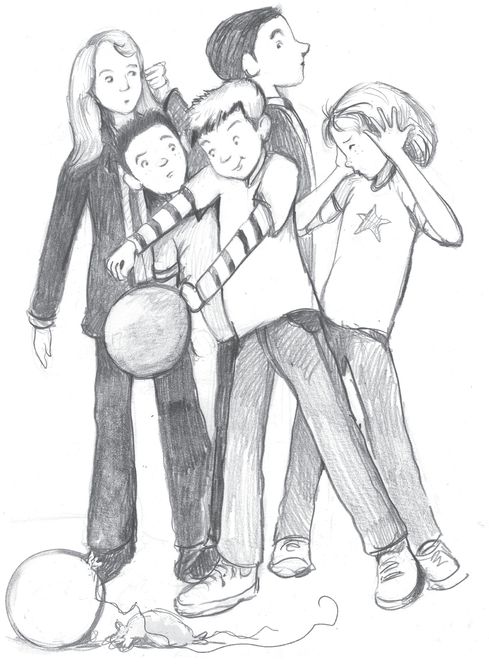 Two of the guards rushed outside.
“I hope you’re right,” Governor Zellner told Cam. “I don’t want to bring him back here if he did nothing wrong.”
“I also hope I’m right,” Cam said.
Cam, Eric, and the others watched the two guards run through the parking lot. Brian started running, too, but the guards were too fast for him.
The guards caught up to Brian and talked to him. One stood on one side of Brian. The other guard stood on the other side. They were much taller than Brian.
“Look,” Eric said, and pointed. “He’s coming back.”
Brian walked slowly into the cafeteria. The guards were right behind him. His head was down. He kicked aside some balloons and stood in front of Governor Zellner.
“They said you wanted to talk to me.”
“Yes, I do,” Governor Zellner said.
Eric said, “Ask him what’s in the bag.”
“Stuff,” he answered. “I didn’t do anything wrong. It’s not against the law to have stuff, is it?”
“If there’s just stuff in your bag,” one of the guards said, “you won’t mind if we look in it.”
Cam said, “I think the ‘stuff’ you have in that bag is a stolen basketball.”
Brian laughed. “A basketball wouldn’t fit.”
“He’s right,” Governor Zellner said. “That bag is too small to hold a basketball.”
Cam took a balloon off the floor. Cam asked Brian and Governor Zellner, “Do you think I could fit this balloon in my pocket?”
“Of course not,” the governor answered. “It’s too big.” 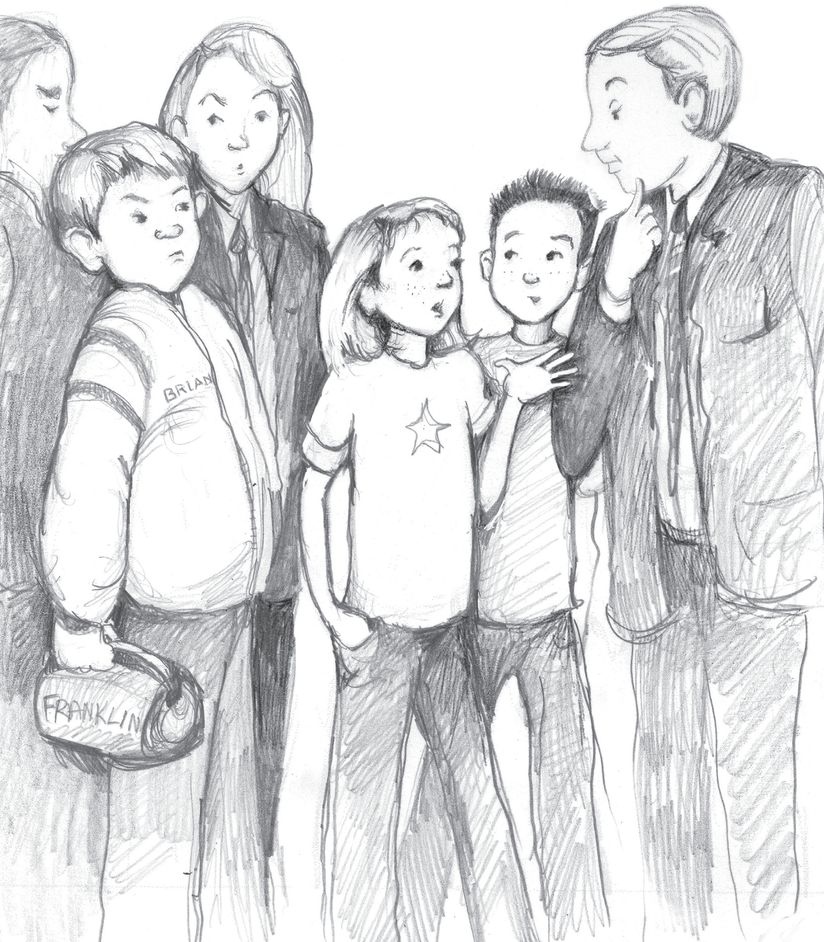 “Please,” she said to Danny, “give me a toothpick.”
Danny gave Cam a toothpick. She poked it into the balloon.
Pop!
The balloon broke.
Cam put the broken balloon in her pocket.
“You see,” she said. “Without the air, it fits in my pocket. And without the air in the basketball, it would fit in that bag.”
“Is that what you did?” Governor Zellner asked Brian.
He didn’t answer.
“May I have that?” the governor said.
Brian gave him the bag. Governor Zellner took out a small wrinkled basketball. There were signatures on the ball and a line and circle drawing.
“Yeah! Cam did it again!” Eric said. “She solved another mystery.”
Mr. Shelton said, “I bet Brian heard on the news that you were giving Coach a basketball signed by Matt Taylor.”
Governor Zellner looked at the many people who had gathered around him, Coach Jenkins, Cam, Eric, and Brian. Jordan Gold and the other Hamilton players were there, too. They had showered. Now they were dressed in regular clothes.
“I’m calling the police,” the governor said. “They’ll handle this.”
One of the guards took out a cell phone. He called the police.
Governor Zellner gave Coach Jenkins the wrinkled basketball.
The coach laughed. “It’s like me,” he said. “I’ve got wrinkles, too.”
Cam thought,
It’s also like Mr. Shelton. His face has lots of wrinkles.
“That’s easy to fix,” Jordan Gold said. “I’ll pump it up.”
Coach Jenkins gave Jordan Gold the wrinkled basketball.
Governor Zellner turned to Cam and Eric. “People who do good deeds should be rewarded. Now how should I reward you for finding Coach’s basketball?”
Coach Jenkins whispered something to the governor. 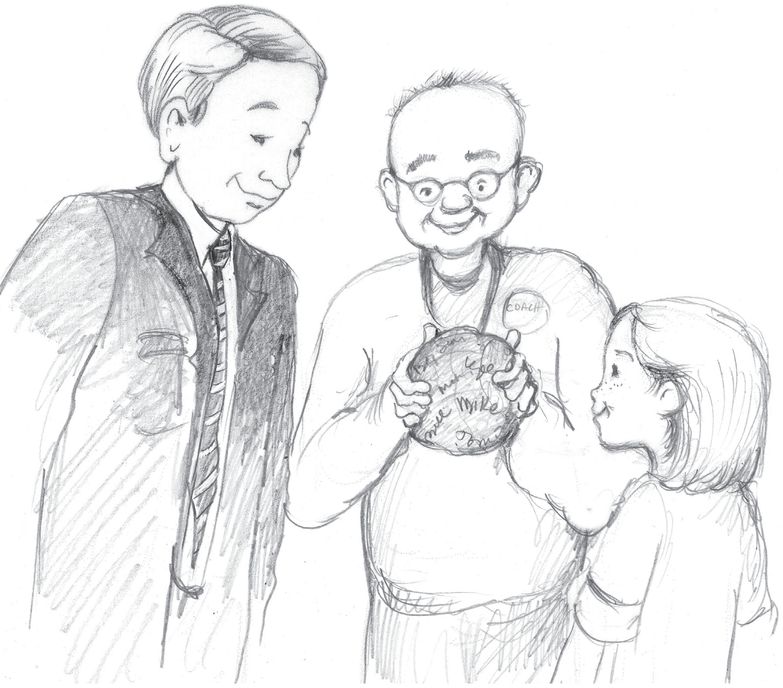 Love in a Carry-On Bag by Johnson, Sadeqa
Lost and Found by Breanna Hayse
You Have Seven Messages by Stewart Lewis
Cell by Robin Cook
GOODBYE to YESTERDAY by WANDA E. BRUNSTETTER
All That I Am by Anna Funder
No Time to Lose: A Life in Pursuit of Deadly Viruses by Piot, Peter
Witch Is The New Black by Dakota Cassidy
Closing the Deal by Marie Harte
Their Stolen Bride (Bridgewater Menage Series Book 7) by Vanessa Vale