Read Can We Talk about Race?: And Other Conversations in an Era of School Resegregation Online

Can We Talk about Race?: And Other Conversations in an Era of School Resegregation

BOOK: Can We Talk about Race?: And Other Conversations in an Era of School Resegregation
10.69Mb size Format: txt, pdf, ePub
Read Book Download Book
ads 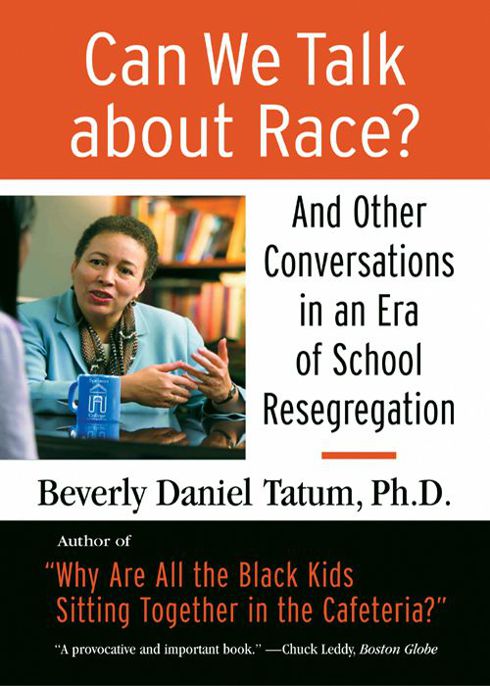 Beacon Press books
are published under the auspices of
the Unitarian Universalist Association of Congregations.

This book is published as part of the Simmons College/Beacon Press
Race, Education, and Democracy Lecture and Book Series, and is based on lectures delivered at Simmons College in 2006.

All rights reserved
Printed in the United States of America

This book is printed on acid-free paper that meets the uncoated paper
ANSI/NISO specifications for permanence as revised in 1992.

To Constance, C. Delores, Rosa, Coretta, and
the women of Spelman who will follow them

INTRODUCTION
Can We Talk about Race?

ONE
The Resegregation of Our Schools and the Affirmation of Identity

THREE
“What Kind of Friendship Is That?”: The Search for Authenticity, Mutuality, and Social Transformation in Cross-Racial Relationships

FOUR
In Search of Wisdom: Higher Education for a Changing Democracy

INTRODUCTION
Can We Talk
about Race?

When I was invited in the summer of 2005 to start imagining this book as the first in the Race, Education, and Democracy series, I did not know in a conscious way that we were nearing the end of an era. I did not know that the next few months would be punctuated by the passing of a generation of Black women who had devoted their lives to the struggle for civil and human rights—women who had been empowered by their own education to work toward the elimination of racism and create a more inclusive vision of democracy—women like Constance Baker Motley, a distinguished civil rights lawyer who wrote the original complaint in the
Brown v. Board of Education
Supreme Court case; C. Delores Tucker, a tireless civil rights activist and founder of the National Congress of Black Women; Rosa Louise Parks, whose courageous refusal to give up her seat on an Alabama bus in 1955 changed the world; and Coretta Scott King, an icon of the civil rights movement who not only fought to preserve her husband’s legacy but became a tireless advocate for justice and human rights in her own right.

Indeed, it was just a few days after the passing of Mrs. King on January 30, 2006, that I gave my first Race, Education, and Democracy lecture at Simmons College, represented here as Chapter One, “The Resegregation of Our Schools and the Afrmation of Identity.” I was privileged to attend Mrs. King’s funeral in Atlanta, and as I sat in the church listening to the dignitaries who had assembled to honor her memory, I thought about all the ways in which our society has changed since she and Martin Luther King Jr. left Boston in 1954 to begin their married lives in Montgomery, Alabama, and the bus boycott launched by Rosa Parks’s actions in 1955. Their deaths, and those of the other women, represent the passing away of a generation raised under the iron rule of legalized segregation, a generation whose time and place must seem, to many young people, far removed from our current reality. Yet despite their courageous leadership and sacrifice, and the courage and sacrifice of many others, more than fifty years later we find ourselves still confronting the legacy of race and racism in our society, particularly in our schools, a reality that undermines the quality of education for all students and represents an ongoing threat to the fabric of our democracy.

Perhaps this should not surprise us. Martin Luther King Jr. once said, “The arc of the moral universe is long, but it bends toward justice.” My parents left the South in 1958 to escape segregation, but I, like many African Americans in the “reverse migration” of the late twentieth and early twenty-first centuries, have returned to the South of my birth, and now live in Atlanta, Georgia, where I serve as president of Spelman College, the oldest continuing historically Black college for women. When I think of my daily experience at the malls of Atlanta, and in the hotels downtown, and at cultural events, it is sometimes easy to forget that Black people did not always have such easy access to restaurants, libraries, restrooms, and water fountains. Young people may not know that familiar department stores were sites of local protest. Yet it was only some four decades ago that the Civil Rights Act of 1964 opened segregated public accommodations to “Negroes,” as we were then called. It is clear to see the way the arc has bent in my lifetime.

Yet as we celebrate what is undeniable progress, there is a reality lurking in the shadows about which most of us are not talking, and that is the resegregation of our public schools. The fact of school resegregation and its implications for important aspects of our democratic society lie at the core of each of the essays included in this book. In essence, meaningful opportunities for cross-racial contact are diminishing, especially in schools. What effect is that having on students, both White and of color, and their teachers? What are the implications for classroom performance and academic achievement? Interpersonal relations? Our evolving democracy? What can
we
as educators and citizens do to ensure that the arc of the moral universe continues to bend toward justice in our society? These are the issues I have tried to address from my standpoint as an African American female psychologist and educator who has been urging her students and colleagues to talk about race since I began teaching a course on the psychology of racism in 1980. Here I ask the fundamental question again:
Can we talk about race?

This question can be asked and answered in multiple ways. First,
can
we talk about race? Are we
allowed
to do so? We are living in a unique moment of legal history in which the notion of considering race (talking about race) in school admissions is being challenged at the K–12 level as well as in higher education. I chronicle the legal history that has brought us from the
Brown v. Board of Education
decision of 1954 to
Grutter v. Bollinger
in 2003 (the case that upheld the use of racial consideration in admissions at the University of Michigan Law School) and now to
Parents Involved in Community Schools v. Seattle School District No. 1
and
Meredith v. Jefferson County Board of Education et al
., two cases involving the use of racial consideration to maintain diversity in public schools, taken under consideration by the Supreme Court in December 2006. The Court’s decision was still pending as this book went to press in early 2007. Even as the Supreme Court considered the limitations of the equal protection clause of the Fourteenth Amendment, we were watching voters in states like California and Michigan approve so-called civil rights initiatives designed to prohibit any such affirmative action programs.
1
Can
we talk about race?

Ironically, as U.S. secretary of education Margaret Spellings advocates for the elimination of racial consideration in school admissions throughout our system of education, the No Child Left Behind (NCLB) Act, signed into law in 2002, requires that we talk about race. The NCLB legislation requires among other things that schools disaggregate the test scores of all students along racial lines. The purpose of doing so is to make sure that all children are succeeding in school—to ensure that the failures of some are not being camouflaged by the success of others, hidden in school averages that reduce accountability and recognition of achievement problems that need to be addressed. One result is that we talk frequently about racial differences in performance. Newspapers regularly report test disparities in school districts along racial and ethnic lines, reinforcing the public perception of inadequate school performance on the part of many Black and Hispanic students. However, we don’t talk often enough about the way the return to school resegregation has confined so many students of color to high-poverty schools where high teacher turnover also means a steady influx of novice teachers, placing vulnerable children in the hands of those perhaps least prepared to give them what they need.
2
In the same way, our public discourse rarely turns to the way our conceptions of race, intelligence, testing, and expectations might impact those disparities. It is that conversation that I present in Chapter Two, “Connecting the Dots: How Race in America’s Classrooms Affects Achievement.”

Can
we talk about race? Do we know how? Does the childhood segregation of our schools and neighborhoods and the silence about race in our culture inhibit our capacity to have meaningful dialogue with others, particularly in the context of cross-racial relationships? Can we get beyond our fear, our sweaty palms, our anxiety about saying the wrong thing, or using the wrong words, and have an honest conversation about racial issues? What does it mean in our personal and professional lives when we can’t? This is the question that I explore in Chapter Three, “‘What Kind of Friendship Is That?’: The Search for Authenticity, Mutuality, and Social Transformation in Cross-Racial Relationships,” as I consider the dynamics of cross-racial friendship in a society that does not encourage—indeed actively
discourages
—talk about race.

Can
we
talk about race? By “we” I mean those of us who are in leadership positions in education—as faculty, as administrators, as men and women of influence. Are we able to serve as role models to young people who may not have the benefit of the educational diversity we have experienced in our lives? Do they see us as able to cross racial and ethnic boundaries to connect with others different from ourselves?

The southern region I live in today is different in many ways from the one my parents left in 1958, and it was students who helped change it. Willie Mays, James Felder, Marlon Bennett, Don Clarke, Mary Ann Smith, and Roslyn Pope were the student government presidents of Atlanta University, Clark College, Interdenominational Theological Center (ITC), Morehouse College, Morris Brown College, and Spelman College, respectively. In 1960 these six students placed a full-page ad in the
Atlanta Constitution
titled “An Appeal for Human Rights.”
3
A powerful and courageous statement, it challenged segregation in federally funded hospitals, and in schools, highlighted the absence of Black police and firefighters, raised questions about inequities in school funding, and protested the fact that many were still being denied the right to vote. Their ad signaled the beginning of several years of highly visible student activism—sit-ins, kneel-ins, marches, and other forms of nonviolent protest. These young people were committed to bending the arc of the moral universe just a little faster. They used their education to challenge the status quo and build a better society. How will this generation of students use theirs?

BOOK: Can We Talk about Race?: And Other Conversations in an Era of School Resegregation
10.69Mb size Format: txt, pdf, ePub
Read Book Download Book
ads

Out of the Blue: Six Non-Medication Ways to Relieve Depression (Norton Professional Books) by Bill O'Hanlon
Any Other Girl by Rebecca Phillips
Tea & Antipathy by Miller, Anita
Carolyne Cathey by The Wager
The Christmas Carriage by Grace Burrowes
The Saint in Action by Leslie Charteris, Robert Hilbert;
Jack Templar and the Monster Hunter Academy: The Templar Chronicles: Book 2 by Gunhus, Jeff
[Dept. 19 Files 02] Undead in the Eternal City: 1918 by Will Hill
Think Like an Egyptian by Barry Kemp
El Imperio Romano by Isaac Asimov