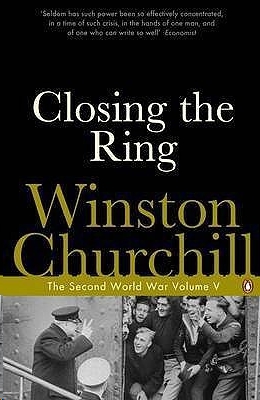 Moral of the Work

In Peace:
Good Will

Theme of the Volume

How
Nazi Germany was Isolated
and
Assailed on All Sides

Book One:
I
TALY
W
ON

1: The Command of the Seas Guadalcanal and New Guinea

3: The Fall of Mussolini

7: At the White House Again The Invasion of Italy

8: The Battle of Salerno A Homeward Voyage

14: Deadlock on the Third Front

17: Advent of the Triple Meeting The High Commands

The Battle of the Atlantic: Merchant Ships Sunk by U-boat

The Conquest of Sicily

The Coast of Northwest Europe

The Roads to Rome

I
N THE
Hinge of Fate
I described the decisive change for the better in our fortunes, which lighted the winter of 1942 and the spring of 1943.
Closing the Ring
sets forth the year of conflict from June 1943 to June 1944. Aided by the command of the oceans, the mastery of the U-boats, and our ever-growing superiority in the air, the Western Allies were able to conquer Sicily and invade Italy, with the result that Mussolini was overthrown and the Italian nation came over to our side. Hitler with the circle of countries he had occupied was isolated, and with the immense onslaught of Russia from the East was completely surrounded. At the same time Japan had been forced onto the defensive and was vainly trying to hold the vast territories she had overrun.

The danger which faced the United Nations was no longer Defeat but Stalemate. Before them lay the formidable task of invading the two aggressors in their home lands and liberating from their grip the peoples they had struck down. This worldwide problem was faced at the Conferences between Great Britain and the United States at Quebec and Washington in the summer, and at the Triple Meeting of the main Allies at Teheran in November. There was between us no difference of aim or of resolve to give all to the common cause. Grave divergencies of method and of emphasis were inevitable because of the various angles from which the three partners naturally approached the decisions which were required. How agreement was reached upon all the supreme issues is the tale I now have to tell. It carries us to the liberation of Rome and to the eve of the British and American crossing of the Channel and entry into Normandy.

I have followed the method I used in earlier volumes. I do not seek to do more than make a contribution to history from the standpoint of the British Prime Minister and Minister of Defence. In this my directives, telegrams, and minutes, written at the time and not in the afterlight, are my stepping-stones. It has been suggested that the answers to many of these documents should also be included. I, on the other hand, have found it necessary in this volume to practise compression and selection in an increasing degree. A final volume is already needed to record and complete the story. I can therefore only make my excuses to any who may feel that their point of view is not fully set forth.

More than seven years have passed since the events here recorded happened. Many international relationships have changed. Deep rifts have opened between former comrades. New and perhaps darker clouds have gathered. Old foes have become friends and even allies. In this setting some of the sentiments and expressions contained in telegrams, minutes, and reports of Conferences may jar upon the readers in other countries. I can only remind them that these documents have an historical value and that we were then engaged in a fierce and terrible war. When men are fighting for their lives, they are not often disposed to be complimentary to those who are trying to kill them. On the other hand, to soften all harsh expressions about the enemy nations of those days would prevent a true picture being presented. Time and Truth are healers.

I
MUST again acknowledge the assistance of those who helped me with the previous volumes, namely, Lieutenant-General Sir Henry Pownall, Commodore G. R. G. Allen, Colonel F. W. Deakin, Mr. Denis Kelly, and Mr. C. C. Wood. I have also to thank the very large number of others who have kindly read these pages and commented upon them.

I am obliged to Air Chief Marshal Sir Guy Garrod for his help in presenting the Air aspect.

Lord Ismay has continued to give me his aid, as have my other friends.

I am indebted to the Roosevelt Trust for the use they have permitted of the President’s telegrams quoted here, and also to others who have allowed their private letters to be published.

*
Book One
I
TALY WON

1
The Command of the Seas
Guadalcanal and New Guinea

E
ARLIER VOLUMES
have led us to the point where the aggressors, both in Europe and Asia, had been driven to the defensive. Stalingrad in February 1943 marked the turn of the tide in Russia. By May all German and Italian forces in the African continent had been killed or captured. The American victories in the Coral Sea and at Midway Island a year before had stopped Japanese expansion in the Pacific Ocean. Australia and New Zealand were freed from the threat of invasion. Henceforward in Europe the Axis must expect and await the Anglo-American assault which had so long been purposed. The tremendous armies of the United States were growing in strength and quality with every month that passed. But the Western Allies could never strike home at Hitler’s Europe, and thus bring the war to a decisive end, unless another major favourable change came to pass. Anglo-American “maritime power,” a modern term expressing the combined strength of naval and air forces properly woven together, became supreme on and under the surface of the seas and the oceans during 1943. It was not until April and May that the U-boats were beaten and the mastery of the life-lines across the Atlantic was finally won. Without this no amphibious operations on the enormous scale required to liberate Europe would have been possible. Soviet Russia would have been left to face Hitler’s whole remaining strength while most of Europe lay in his grip.

In the Mediterranean the U-boats were also mastered. Our armies for the Sicilian and Italian campaigns were assembling and could now be launched across the sea against the underbelly of Hitler’s Europe. Besides this the Mediterranean was the main artery in the communications of the British Empire. The extirpation of Axis power in North Africa opened to our convoys the direct route to Egypt, India, and Australia, protected from Gibraltar to Suez by sea and air forces working from the newly won bases along the route. The long haul round the Cape, which had cost us so dear in time and effort, would soon be ended. The saving of an average of forty-five days for each convoy to the Middle East increased magnificently at one stroke the fertility of our shipping.

The single-handed British struggle against the U-boats, the magnetic mines, and the surface raiders in the first two and a half years of the war has already been described. The long-awaited supreme event of the American Alliance which arose from the Japanese attack on Pearl Harbour seemed at first to have increased our perils at sea. In 1940 four million tons of merchant shipping were lost, and more than four million tons in 1941. In 1942, after the United States was our ally, nearly eight million tons of the augmented mass of Allied shipping had been sunk. Until the end of 1942, the U-boats sank ships faster than the Allies could build them. The foundation of all our hopes and schemes was the immense shipbuilding programme of the United States. By the beginning of 1943, the curve of new tonnage was rising sharply and losses fell. Before the end of that year, new tonnage at last surpassed losses at sea from all causes, and the second quarter saw, for the first time, U-boat losses exceed their rate of replacement. The time was presently to come when more U-boats would be sunk in the Atlantic than merchant ships. But before this lay a long and bitter conflict.