Read Forget Me Not (Love in the Fleet) Online

Forget Me Not (Love in the Fleet) 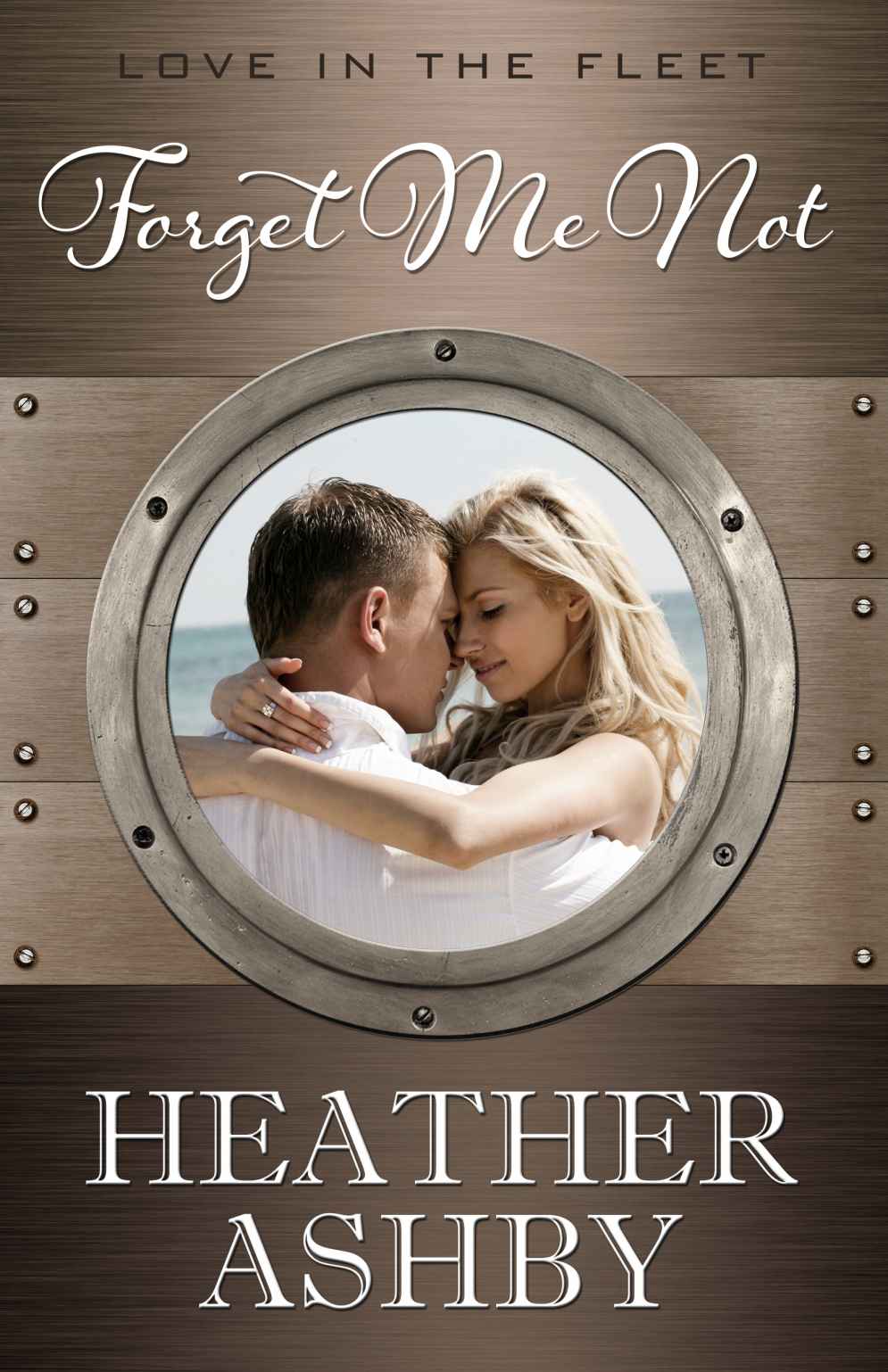 Praise for Heather Ashby’s Love in the Fleet Series

“
Forget Me Not
takes flight with a dose of humor and suspense and reminds us of the healing power of love for wounded warriors and the ones left behind.”

Author of
Body of Evidence

“Pull your five-point harness tight and brace for impact as sexy Sky Crawford pilots a Navy Seahawk helicopter and closes in on his targets. When it comes to terrorists, drug runners, and hot women, Sky never misses.”

“Bold and steamy with a suspense taken from today’s headlines and a love that breaks all rules.”

“Heather Ashby writes characters that are anything but standard issue. This exciting high seas adventure showcases a world of honor, duty, and selfless service. But most of all, it’s a lovely example of how love conquers all.”

Author of
Meant to Be
in the Anchor Island Series

“A thrilling novel…takes the reader into adventure on the high seas that involves suspense, danger, and intrigue, as well as forbidden love. This is a feel good read that rings true in every regard!”

“A fantastic debut! Heather Ashby kept me entertained all the way through with engaging characters and a story that had me right there living it.”

“Heather Ashby’s characters are appealing and realistic, her depiction of life aboard an aircraft carrier is fascinating, and the suspense and romance crackles throughout…a compelling, compulsively readable love story that’s as hard to put down as it is to forget.”

“Although her novel’s characters are at sea, Ashby isn’t. She has a sure grasp of romance and adventure in a war zone…An up-to-the-minute-tale for today’s military and civilian adventure reader and a complete treat for readers of romance.”

Books in the Love in the Fleet Series

Praise for Heather Ashby’s Love in the Fleet Series

Books in the Love in the Fleet Series

A Love in the Fleet Story

All rights reserved. No part of this book may be used or reproduced in any manner whatsoever, including Internet usage, without written permission from Henery Press, except in the case of brief quotations embodied in critical articles and reviews.

In thanksgiving for my Army son’s safe return from Afghanistan and Iraq, I donate half the royalties from this book to organizations that support wounded warriors and their families.

Special thanks to the heroes and heroines in the U.S. Navy helicopter community whose hard work and dedication help to make the world a safer place. I am grateful to the Mayport ASW and SAR crews who fly over my house daily, reminding me to stay on task while writing my books. To those flying over the beach around 1700, I’m that crazy lady who waves and blows kisses at you. Let me know if you liked
Forget Me Not
by waving back. Extra special thanks to three very patient—and of course, handsome—Navy Seahawk pilots who shared their sea stories and expertise with me. Bravo Zulu, guys. I never could have written this book without you.

Thank you, Romance Writers of America, for naming
Forget Me Not
a 2012 Golden Heart Finalist. (Original title:
Cat on A Hot Steel Flight Deck
) This honor connected me with my awesome editor Kendel Flaum at Henery Press and with my equally awesome Firebird Sisters.

Gracias
to Pris Kissinger for double checking my
Español.
Thanks to my beta readers and reviewers, especially Merline, Kieran, Cindy, Alyssa, Sharon, Rachel, and Jane. Thanks to the Firebirds, RomVets, FCRW, and all the hens in the Hen House for your support. To my awesome CP, Catherine Rull, for sending 50 pages at a shot from Australia so I could do edits between workshops at Nationals. Thank you, Maria Connor at My Author Concierge, for taking care of all business matters. Hugs to Suzanne, Laurie, Kathleen, and the Sky Crawford Fan Club on Facebook. Sky and I say, “Thanks, Sweethearts.” Special thanks to the staff at Oceanview Veterinary Hospital and extra scratches under the chin to Camille Stevens for serving as the prototype for Daisy Mae.

Thanks to Erich Fromm’s
The Art of Loving
for explaining the difference between
love
and
in love
.
Learning this valuable lesson in my teens has worked magic for me through the years. I’m grateful to my First—and only—Mate, Pete, for your love and support. And thanks to my agent, God, for helping me navigate through my writing career and life.

The yowling outside his window the night before had Sky wanting to take the goddamn cat down to the ocean and drown it. He’d been attempting to entertain his chick-du-jour, but the ruckus on the porch distracted him from making that little baby purr.

Distractibility had earned Brian Crawford the nickname “Skylark” at the Naval Academy after one too many demerits for
skylarking
: daydreaming, “not keeping his eyes in the boat,” and pretty much having his head up his ass at the wrong time. Suffering from ADHD, he’d always had problems with focus—except at the controls of his Navy MH-60R Seahawk helicopter.

Last night’s honey conned him into feeding the cat, then she made him promise to take it to a vet and find it a home. If the woman was such a bleeding heart animal lover why hadn’t she taken the freaking thing? So what if she lived in the bachelor officers’ quarters? Never mind. It wouldn’t go with her anyway. The cat growled and hissed at her, and Sky would eventually learn it feared all women.

Fortunately, he was able to snag this appointment at Oceanside Veterinary Clinic. He’d even consider making a sizeable donation if the vet would take the animal
off his hands that afternoon. Regardless, Sky knew he’d do whatever it took to keep last night’s sweet young thing rubbing up against him with affection.

The vet tech finished taking vital signs and informed him Dr. Schneider would be with him shortly.

Sky looked forward to chatting with the good doctor, not only to unload the stray, but also to discuss kayaking. He had noticed an SUV in the parking lot that sported a Thule Hullavator, the top-of-the-line kayak rack. Turned out it belonged to Dr. Schneider. This guy already rocked in Sky’s book.

But when the door opened, the woman who entered rocked Sky’s world instead.

One of the benefits of ADHD was the fact that Sky could multitask with the best of them. His brain flipped over to autopilot. Left eye did the ring finger check. No rings. Good sign. Right eye—hey, something was wrong here. His right eye knew it was assigned breast patrol, but it couldn’t seem to move past her blond hair swept up into some kind of barrette thingy. Hair that screamed for him to pull out that clip so he could watch the flaxen mass come tumbling down like the walls of Jericho. Then both eyes got too lost in her pale blue ones—or were they green?—to even consider glancing lower.

Peripheral vision was called in as backup and the situation report said any woman that looked this good in a pair of scrubs must be some mighty fine booty.

Sky scrambled to formulate an appropriate introductory comment. However, his brain was still locked and loaded on kayaks, prompting the following to shoot from his mouth:

He jerked his thumb toward the door. “Isn’t that your Jeep in the parking lot?”

“I asked at the desk. Aren’t you the kayaker? I mean, that is, like, the best rack on the planet.”

Dr. Schneider looked like she was trying to keep from—wait, was she laughing at him? What was so funny about a—?

Sky Crawford had learned long ago whenever he tried to dig himself out of a hole that he usually only dug himself deeper, so he feigned ignorance and soldiered on. Possessing an excellent poker face had come in handy far too many times in his life. Smiling his signature grin, which revealed a space between his two front teeth—God knew why chicks dug it, but they did—he jumped in with both feet.

“And according to your bumper stickers, you support the troops. So how about supporting this troop and going kayaking with me this weekend?”

The vet’s eyes drilled his as she opened the box containing the cat. “Are you hitting on me?”

“Too strong, huh?” He scrubbed a hand through his blond crew cut and appeared deep in thought for only a second. “Would you like to meet for coffee sometime?”

“Oh, I’m not a client. This cat showed up on my doorstep last night and I’m getting it up to speed so I can find it a home. How about I find him a home this week and then I definitely won’t be a client. So, you want to go kayaking next weekend? Or coffee? I’m game for either one.”

“Aw, honey, is that any way to support the troops? What’s the matter? Crashed and burned before?”

“You could say that. And I’m not your honey.”

Had the room taken on a chill? Or was it coming from the Ice Queen who continued to stare at him, chin raised in defiance. Sky retreated. Figured he’d regroup his forces before he came in for another assault.

The cat wanted no part of Dr. Schneider. It repeatedly crawled across the exam table and into Sky’s arms. Each time she tried to pull it back, it hissed at her.

“There might be something wrong with it, because he cried, like, all night. About drove us crazy,” Sky explained.

The vet handled the cat with expertise and eventually managed to examine it. “Well, first of all,
he
is a she and
she
is in heat. She made all that noise because she’s looking for a mate.”

Blessedly, Sky’s brain overloaded its circuit board and blew a fuse, rendering him powerless to speak. It was his body’s way of protecting him from saying something beyond stupid. So many good lines were vying for attention that he needed a mental heat-seeking device to lock onto just one of them.

“If she is, indeed, a stray, the best thing would be to spay her,” Dr. Schneider continued. “Although there’s the possibility she’s already pregnant. If she’s been out for the past several days, she could have conceived, but her system hasn’t caught up with the fact. So she may still try to breed. Cats can
carry a litter of kittens from different fathers, you know.”

ThisTimeNextDoor by Gretchen Galway
Seeding Her Womb: Book 1 (Alien Tentacle Erotica) by Chelsea Chaynes
Get Well Soon by Julie Halpern
The Ground She Walks Upon by Meagan McKinney
A Partridge in a Pear Tree by McCabe, Amanda
The Last Hot Time by John M. Ford
In Blood We Trust by Christine Cody
Hell's Kitty (Welcome To Hell) by Eve Langlais
Slayer by D. L. Snow
Trace (Trace 1) by Warren Murphy