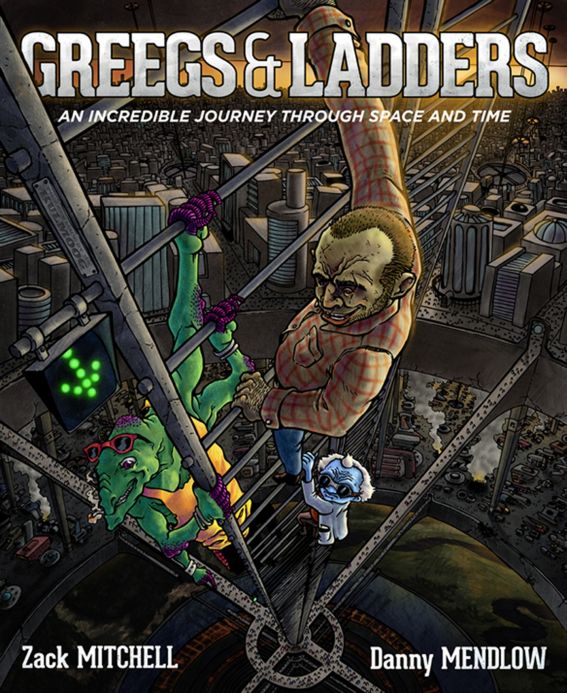 Discover other titles by Mitchell Mendlow at

Hmmm, where to
start?

Not a great
place to pop by and fuel up your space ship.

The ship
I first came to Earth on was fuelled by investment bankers.
Generally agreed upon as the most useless organisms ever to exist
in the vast history of time and space
,
it’s common knowledge the only thing they are good for is
fuelling space ships.

You would
think this abundance of investment bankers and lack of common sense
would make Earth a damned fine place to pop by and fuel up your
space ship.

If you had the
same experience I had, then you would not think of it as a great
place to pop by and fuel up your space ship.

If you had a
space ship.

Now,
many
millennia
of Earth stories have trained
your brain to believe that for a story to truly be a story, it must
start with one character (a protagonist), and that person must be
followed on a journey in which they will encounter various
obstacles in order to arrive at their destination. Without meeting
this singular character early on in a story, you may be curious if
this is even a story at all, rather than just a random assortment
of descriptions of silly creatures on silly planets. Don't worry.
There is a story to be told here, but there’s no point in telling
it until you understand the setting in which the story takes place.
Since you know absolutely nothing about this place, it's going to
take a little bit of time. Imagine how little you know about the
hair follicles in Julius Caesar’s left nostril. Double it, dip it
in chocolate sauce and then multiply it by a quintillion or two.
That’s how little you know about this place. This is how we tell
stories in the rest of the universe. Time to catch up.

The main
trouble I will have trying to describe the world in which this
story takes place is one of tense. To me, from my perspective, all
of these events have happened in
my
past. But I am acutely aware that much of it does not occur
in
your
past. There
is a tense in many alien tongues for this exact literary dilemma.
Alas, no such luck with English. Please bear with me in the opening
chapters, as I appear to jump between the present and past tense.
On the simple, linear time-line of your average human, all of these
events have actually happened in what you would call 'the future.'
But from the perspective of me, it is the past, and from the
perspective of the actual story it is the present. So whatever it
is, whenever it is... just be happy knowing that it is. Or was. Or
will be. Kind of.

This
story begins (began, will begin some day)
on a planet you've never heard of. This isn’t
saying much, considering most of you can only name nine on a good
day. A fairly pathetic feat, when you imagine the
mind-blowingly
infinite
sea of planets there are out there, but every species has to start
somewhere I suppose. (Pluto is a planet by the way, not sure what
it did to your astronomers to deserve being demoted.)

This
planet exists (existed, will exist) in a solar system quite unlike
your own. There are fifty-nine suns in this one solar system. (Or
at least there will be some day, and definitely was when I was
there). There are as many as forty-seven planets revolving around
each of these suns. Four suns have no planets at all doing anything
around them. Near the middle of this vast network of gaseous orbs
and rocks there is one sun about five times the size of your own.
This sun has thirty-eight planets performing gravitational
hula-hoops around it. Eleven of these planets support ‘life’ as you
would define it. In truth, everything is ‘alive’ (and dead for that
matter) but I won’t try and persuade you otherwise. You seem fairly
set in your ways. Fairly certain of your definitions. Fairly
resilient in your steadfast determination to continue believing in
your institutions, your corporations, your religions, your
political leaders, and most astonishingly… your investment bankers.
So I shan’t attempt to convince you otherwise. Instead, I will just
tell you
this little
story.

Once upon one
of these eleven planets there existed a population of Greegs.

Greegs are a
mutation, much like yourself. Not a rare group by any means, you’ll
find them many places in the vastness of space... unlike
yourself.

However,
it
is
extremely rare that Greegs will
actually find themselves the most intellectually evolved creatures
on a thriving planet. In most scenarios Greeg populations would be
kept under tight control for fear of wreaking havoc on their planet
and the other species on it. They are used primarily as carnival
attractions. In small numbers they are harmless and amusing. Sound
familiar?

Completely oblivious to this universal normality, The
Greegs on this planet found themselves to be dominant and
unchecked. They were indeed running the show. Without a multitude
of other species keeping their population under control and letting
them know how inferior they were, these particular Greegs found
themselves
blissfully
suffering from delusions of grandeur and overdosing on
self-importance.

Even though
they were sharing a solar system with 59 other suns and could
plainly see several, habitable planets with the naked eye… they
were quite certain that their planet was the only one that ever
did, ever would, and did currently contain life.

To really make
things almost sad, The Greegs believed something else: That all of
the other suns and planets and galaxies and universes; all the big
things, all the small things, and everything in between that ever
did exist in the whole entirety of everything and anywhere… were
put there just for them. A kind of mobile for The Greegs to look at
and go ‘Well, isn’t that nice and pretty… thanks for that.’

To make things
infuriatingly, impossibly, really just plain difficult to
comprehend even a little bit, The Greegs also held another
collective opinion. They actually, genuinely believed (with a
straight face nonetheless) that they were the smartest and
cleverest creatures to ever exist. What a laugh!

Above all
though. Above all of their beliefs and primitive understandings of
their place in the grand scheme of things, The Greegs suffered from
one delusion greater than any others.

Everything The
Greegs did, every action they took, every decision they made, was
fuelled by one insatiable desire. They desired to obtain and retain
large amounts of schmold. Schmold was a green, glowing, sticky,
gooey substance that was found deep in the core of the planet.
Schmold mining and preservation was the number one priority of all
Greegs. They couldn’t possibly even consider doing anything without
first thinking how much schmold it would cost or what effects it
might have on the schmold trade.

Schmold served
no actual purpose whatsoever, except that Greegs thought it looked
really neat. The ultimate sign of wealth and status and
accomplishment was to take a schmold bath. The poorest Greegs would
never have, nor could they ever logically hope to obtain, even a
little bit of schmold. But they would dream.

“One day, I’m
going to make it so big. I’m going to be so successful that I will
take a schmold bath every week,” they would say.

Clearly no one
could ever be so lucky.

Only
once was there a Greeg who did not dream of taking a schmold bath.
His name was Groolfh, and he had the shockingly original revelation
that one was much luckier for
not
taking a schmold bath, as to bathe in schmold is to make
oneself filthier than the bottommost layers of Garbotron, an
uninhabitable planet used only as a dump for countless millennia.
Garbotron was well-known as the worst smelling place in existence.
I can attest to this fact, having seen Garbotron with my own eyes;
that is to say, having seen the noxious green vapours surrounding
Garbotron from 8 light years away. The planet itself is only
visible while actually standing on the surface, yet to stand on the
surface is to die within seconds.
No
mortal creature
is exempt from this rule. Even if you’re a life-form that
is biologically incapable of the sense of smell, your mind will
instinctively know that you are standing in a place that smells too
awful to comprehend, and not wanting to take the chance that
through a miracle you suddenly acquire the ability to smell, will
shut itself down in a manner best suited to the
occasion.

Another
important fact about Garbotron is that one doesn't even need to go
remotely near it to experience its danger
.
A dark day in Galactic history was the time an interstellar
wind had the unfortunate timing to pass directly through
Garbotron’s Diaper Mountain
. The name Diaper Mountain is slightly deceiving. It isn’t
really a mountain. More a sort of hemisphere
. Defying the logic of space with its
unstoppable stench, the forgotten memories of Diaper Mountain
casually drifted across several light years before settling down on
a peaceful, reddish planet. Sadly, this reddish planet was
inhabited
.
A
ll 9.7 billion
resident creatures promptly suffered death when the logic-defying
stench arrived.
It is a
good thing sound does not travel through space as well as aroma,
for the screams of the dying creatures were so shrill they would
have devastated beyond repair the nearby planet Glassvexx,
thus sending millions of shards
of apparently unbreakable Jardian mega-prisms hurtling through the
cosmos for most of infinity
.

Groolfh,
justifiably believing he’d made a discovery that would forever
transform the history of the Greeg, went forth to one of the
highest-up committees in charge of schmold distribution and
attempted to explain the futility of bathing in schmold. He
passionately argued that bathing in schmold makes you infinitely
less clean. He was met with a unanimous vote of disdain and
bewilderment. ‘Something as ridiculously expensive as schmold is
clearly worth taking a bath in’ was all the committee said before
sentencing Groolfh to death for daring to think otherwise. Groolfh
was fired out of a cannon aimed directly at Garbotron VI. Luckily
he was vaporized in the atmosphere, however the wind of the cannon
fire had the unfortunate timing of passing directly through Diaper
Mountain on its way to a peaceful reddish planet.

If these
particular Greegs were aware of life on other planets, and were
able to notice the interconnectedness of life in the universe as
well as I am, they might have adopted a motivational motto that
went something like this: ‘To deny the usefulness of bathing in
schmold is to cause 9.7 billion creatures to die horribly of
Garbotron suffocation.’

Such a
revelation was not had.

Greeg
children often fantasized about their future adult career. The only
difference with Earthling children, who dream of being any random
thing like an actor or a scientist, is that Greegs' career choices
were entirely limited to one of the many sub-categories of
schmold production. However,
Greeg children were still free to dream about which exact area of
schmold production they would like to be a part of. Schmold
Tunneler? Schmold Taster? Schmold Bathroom Attendant? Some children
had high hopes, announcing to proud parents they would one day be
the owner of their very own schmold Dealership. Some children aimed
their sights low, announcing to embarrassed parents they wished to
be a lowly schmold Bottler.