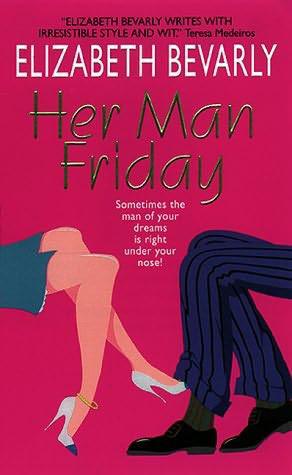 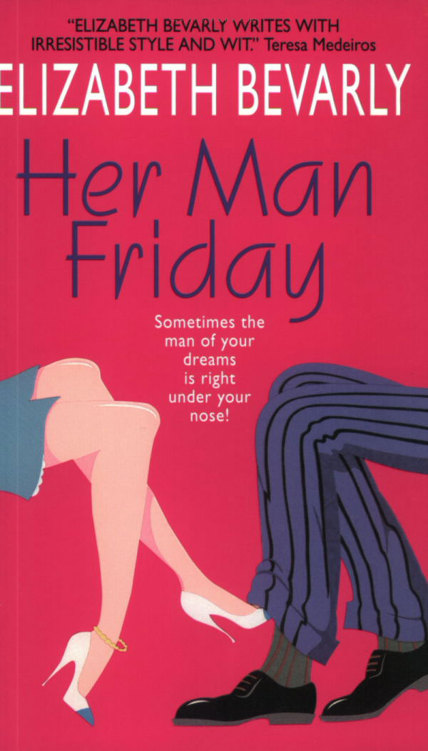 Other Avon Contemporary Romances by

This is a work of fiction. Names, characters, places, and incidents either are the products of the author's imagination or are used fictitiously. Any resemblance to actual events, locales, organizations, or persons, living or dead, is entirely coincidental and beyond the intent of either the author or the publisher.

Avenue of the Americas

Published by arrangement with the author

This book is dedicated very fondly to

four of the smartest, cutest guys

to come down the pike.

Thanks for all the hours of

not to mention all those pitchers of Dark Stroh's.

I have a few quick thanks to extend on this one. Thanks first to my editor, Lucia Macro, for her limitless patience and understanding, not to mention superior editing skills. Thanks next to all the writers on the Avon Ladies and Desirables e-mail loops for providing me with my daily doses of friendship and reality. You guys have no idea how important you've become to me.

Many,
many
thanks to Laurie Jones for doing that promotional thing you do (and to your lovely husband Bailey for getting me to the airport on time).

Special and profuse thanks go to my two—count 'em two—personal Mother Teresas. Thank you to Teresa Medeiros and Teresa Hill for helping me hold on to my sanity and good humor during a year when those grew increasingly difficult to hold on to. I simply do not know how I would live without friends like you.

Musical inspiration for this book came from the incomparable Brian Setzer Orchestra and their CD entitled
The Dirty Boogie
. I will never, ever, tire of hearing "Jump, Jive and Wail" in the morning. It makes coffee pretty much redundant.

And my apologies to Seiller & Hand maker, LLP, who, thanks to my lousy penmanship, were misidentified in the acknowledgments for my last book. I hope I got it right this time.

And as always, thanks to my husband David and my son Eli for putting up with all the deadline dementia, the quickie meals, and the distracted staring off into space. I owe you guys big. Someday, I promise, I will give you the gift of time. Until then, know that I love you more than anything. Thanks, guys.

Oh, man. A bunch of wrinkled old white guys wearing two-thousand-dollar suits. So it was going to be one of
those
jobs again, was it?

As he tunneled fingers through his medium brown hair, Leo Friday shifted his weight from one foot to the other, arced his gaze around the U-shaped table that surrounded him, and eyed each of his new employers one by one. But even the fact that he was standing and they were sitting did nothing to relieve his tension. First in line was Versace Man, dressed to the nines in a black pinstripe number that put Leo's faded blue jeans, white T-shirt, and black blazer to shame. Beside Versace Man was Cohiba Man, puffing with much relish on the stump of a fat cigar. Beyond him was—oh, swell—Grecian Formula Man. Did old guys really think they were kidding anybody when they used that stuff? And after that came… ew, Halston for Men Man, way too close for comfort. Leo did his best to breathe shallowly.

One by one, he took in the dozen or so members of the board of directors of Kimball Technologies, Inc., the pride and joy of Philadelphia's business community. And he thanked God—not for the first time—that he was self-employed and didn't have to answer to guys like these. Because guys like these definitely lived and played by a different set of rules than Leo did, rules that were doubtless engraved in twenty-four-carat gold somewhere.

Okay, he amended reluctantly, when he recalled that these guys were his newest clients, so he was
technically
self-employed. Unfortunately, being self-employed meant he was also up for hire. Which meant he was pretty much answering to Kimball's board of directors. For now, anyway.

They'd dispensed with the initial formalities, and he'd declined the obligatory cup of coffee. Might as well get on with it. "All right," Leo said halfheartedly. "Give me the particulars."

Leo had to admit that as particulars went, that one was pretty substantial. "Can you be more specific?" he asked.

Versace Man shook his head. "No. That's the problem. We don't know how the money is disappearing, or from what branch of the business, or who might be doing the stealing. We only know that there should be quite a bit more money than there is. And we want you to find out where it is, and who's responsible for its disappearance."

A man halfway around the table met Leo's gaze with what the old guy probably thought was a steely glare. Unfortunately, his expression only succeeded in making the man look nearsighted. "And then," he intoned with a voice reminiscent of God's, "we want to you hang the bastard out to dry by his nuts." Hoo-kay, Leo thought. So Charlton Heston Man had checked in, had he? Aloud, he said, "That's not much to go on. I mean, Kimball Technologies
is
a multinational, multi-billion-dollar corporation, with holdings in dozens of areas of industry. Couldn't you be a little
more
specific?"

Versace Man plucked at his perfectly knotted necktie, an accessory that had probably set him back more than Leo's poker losings for a whole year. "No. That's the problem. Whoever is doing the stealing is damned good at it. We can't locate the origin of the theft at all."

Grecian Formula Man nodded his agreement. "We only know that the annual report for Kimball Technologies just came out, and although there was a nineteen percent rise in gross earnings, total profits fall short of what they should be. It's a pattern that's been plaguing the company for a few years now—a rise in gross earnings, yet a drop in total profits. This year, however, the discrepancy is a bit too big to ignore. It's causing us some concern."

The men all exchanged wary glances, as if they weren't sure how much to reveal to the very man who was supposed to uncover the alleged theft. Ultimately, they all turned their attention to Cohiba Man, who puffed once on his cigar, then cleared his throat indelicately before meeting Leo's gaze.

Okay, granted, Schuyler Kimball, Philadelphia's most notorious native son, was one of the world's leading billionaires. Even without doing his research on the company—and the man—before taking on his current clients, Leo knew that much about Kimball. As did nearly everyone else on the planet. And it wasn't like Leo had never been exposed to extremely large sums of money in his time. Recouping massive corporate losses was part of what he did for a living. But this…

This was a hell of a lot of money they were talking about. And the fact that it was only a small percentage of Kimball's annual take just made it that much more astonishing.

Another member of the board narrowed his eyes and glared at Leo. "Yes, Mr. Friday, it does indeed… suck," he agreed. "It's unfortunate. Inconvenient. One might even say ruinous. But that's why we wish to utilize your preeminent faculties and aptitudes. We comprehend that you are unequaled in the business when it comes to unearthing white-collar crime and harvesting the illicit fruits of that felonious labor."

Oh. Wonderful. Thesaurus Man, Leo decided. He shrugged off the compliment—once he understood that it was, in fact, a compliment. Hey, he
was
the best in the business when it came to ferreting out embezzlers, appropriators, abstracters, and outright corporate thieves. With degrees in accounting and finance, and a government background with both the government's General Accounting Office and the FBI, he'd left public service five years ago to start his own investigative agency—one that specialized in white-collar crime, particularly theft.

And boy, had he seen a boom in business, right out of the gate. Today's executives seemed to think their six-figure incomes and full medical coverage and luxury company cars and golden parachutes didn't begin to cover their needs. It never ceased to amaze Leo how greedy people could be. People who had it all still wanted more. And more. And more.

"I'm going to require total and unhampered access to the Kimball Technologies files," he said flat out. That was always the hardest thing the corporate big shots had to get used to—surrendering all their dirty little business secrets. But if these guys didn't give him unlimited access, they'd have to find another man for the job.

Cohiba man puffed once. "You'll have it, Mr. Friday," he said.

Leo arched his brows in surprise. Okay, so maybe Kimball's board of directors wasn't going to be so hard to deal with after all. "And I'll need for all of you to be available to me for questioning."

"Done," Cohiba man agreed without even consulting his colleagues. The other men nodded.

Well, hell, Leo thought. They were taking all the fun out of it. "And I'll require full and unhampered access to Schuyler Kimball, as well," he added.

"I said you won't have access to Schuyler Kimball," Cohiba Man repeated. "You're not to bring him into this. He's a very busy man."

Leo eyed the other man warily. "Let me get this straight. I'm trying to find fifty million dollars that someone has stolen from Kimball, but I can't have access to the man because he's too busy to see me?"

"Excuse me for seeming a bit, oh… shall we say
… miffed
about such a development, but I'm gonna kinda need to talk to the guy."

Cohiba Man puffed some more. "No, you won't."

"Far be it from me to
miff
you, Mr. Friday, but you won't need to speak to Mr. Kimball because Mr. Kimball doesn't know the money is missing, and he's not to know of your investigation. That's why."

Leo squinted as the billows of smoke grew trucker around the other man. "Isn't he the one who's hiring me?" he asked.

Flesh: Part Thirteen (The Flesh Series Book 13) by Corgan, Sky
What Mother Never Told Me by Donna Hill
Lillian Duncan - Until Death Do Us Part by Lillian Duncan
The Unthinkable Thoughts of Jacob Green by Joshua Braff
CheckMate (Play At Your Own Risk) by Mickens, Tiece
A Murderer Among Us by Marilyn Levinson
Kingdom Keepers: The Syndrome by Ridley Pearson
The Billionaire Bargain 3 by Monroe, Lila
Greyrawk (Book 2) by Jim Greenfield
Hearths of Fire by Kennedy Layne