BOOK: Horrible Harry and the Ant Invasion
>>DOWNLOAD HERE >>READ ONLINE NOW
ads
“Sidney, one of the reasons I have dancing is that we need to learn manners.”
Sidney put his head down.
“We must say thank you to everyone we dance with. Being polite is very important.”
After a moment of silence, Miss Mackle added.
“ANYBODY
who doesn't agree can dance with the teacher after schoolâwhen we'll go over these rules.”
Sidney turned green.
All the girls giggled.
All the boys groaned. I did, too. Dancing with the teacher would be deadly.
Miss Mackle showed the girls how to curtsy.
Then she showed the boys how to bow.
Everyone practiced.
I made a face. I hate to dance. When I looked across the floor, I looked at my partner.
It was Song Lee.
Harry gave me a jab in the side. “Move over,” he said. “I'm dancing with her.”
I didn't mind at all. There were more boys than girls, and no one was standing next to Song Lee.
“You have Miss X,” Miss Mackle said to me.
I beamed. Dancing with no one wasn't bad at all.
Miss Mackle then showed us how to do the Virginia reel.
Harry walked over and took Song Lee's hands. He wanted to get ready early.
“Not yet,” Miss Mackle said. “I haven' t even turned the music on.”
Everyone laughed.
Harry held up his fist.
When the music finally did go on, the boys walked across the floor and bowed.
The girls walked across the floor and curtsied.
“Now let's do the Virginia reel!” Miss Mackle called.
Sidney walked over and took Mary's hands. His eyes were closed.
They sashayed down the center.
And then they joined their lines.
“You didn't stop and twirl her under your arm,” Miss Mackle complained.
Harry was next.
He walked over and took Song Lee's hands and then they sashayed down the center. He stopped, put up his arm, and Song Lee twirled around and then curtsied.
Harry bowed so low his curly hair touched his knees.
“Bravo!” Miss Mackle said. 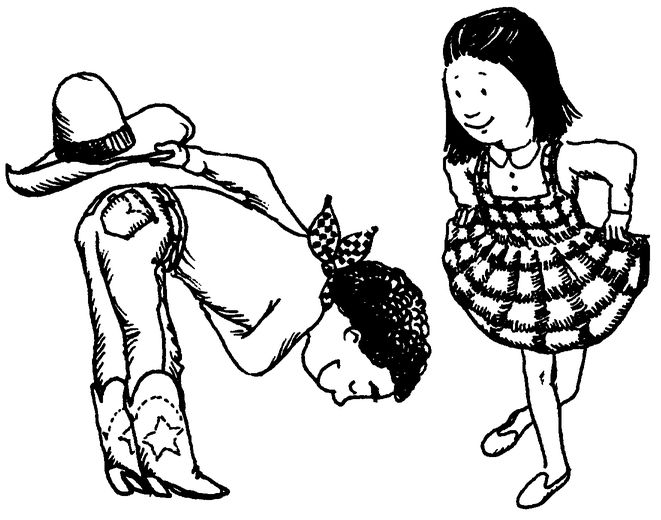 Harry flashed his white teeth.
Song Lee looked down at her black shoes.
When I came down with Miss X, everyone laughed.
The next time we went through the line we had new partners. I had Ida. Sidney had Song Lee.
When Sidney went over to take Song Lee's hands, he had his eyes closed again. He didn't want to dance with a girl.
Instead of looking where he was going, he walked right into her, and they bumped heads.
Song Lee put her hand on her forehead. There was a big bump and a red mark on her forehead. She was trying not to cry but everyone could see the tears on her cheek.
Harry raised a fist at Sidney.
Miss Mackle sent Song Lee to the nurse. Then she said, “We will have one more dance. Sidney, you must be more careful.”
“He should keep his eyes open,” I said.
Miss Mackle walked over to Sidney. “Were you dancing with your eyes closed?”
Sidney shook his head. “Nope. They were wide open all the time, like this.”
The class stared at Sidney's eyes. They looked like giant white gumballs. Then he made them revolve around and around.
Miss Mackle turned to put the needle on the record.
Harry raised two fists. I knew what he was thinking. Double revenge.
When we returned to the classroom, Song Lee was sitting in her chair with an ice bottle held against her forehead. 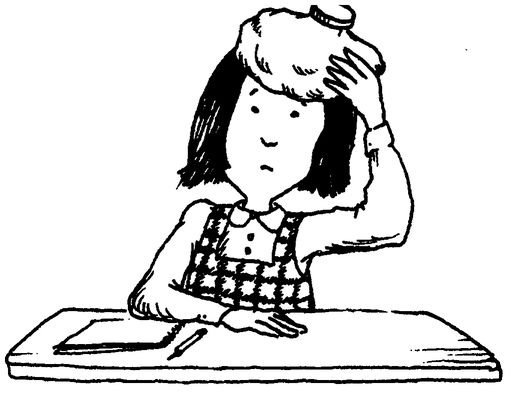 Just before the three-oâclock bell rang, Harry offered to take the bottle back to the nurse for her.
Song Lee thanked him and then went out of the classroom to get her coat.
As the rest of the class lined up to go home, Harry said, “Hey, Sidney. Meet me at the comer. I have a little present for you.”
“You do?” Sidney said.
Harry flashed his white teeth. “I do.”
Sidney waited for Harry at the corner. “What are you giving me a present for?” he asked when he saw Harry.
“For that trick you did in dancing today.”
“Trick?” Sidney couldn't remember.
“You bumped into Song Lee because your eyes were shut.”
“Yeah! She even had to go to the nurse with the alligator purse!” Sidney said, bursting into laughter. “So where's my present?”
“Right here,” Harry said, flipping the ice bottle and pouring it down Sidney's back.
“Yeoooooow!
That's
COLD!” Sidney screamed as he ran up the street waving his hands in the air. “I'll get even with you for this. Just wait!”
I looked at Harry. “Where did you get that bottle of ice water?”
“From Song Lee. I told her I would return the bottle to the nurse.”
And then Harry flashed his white teeth. “I didn't say I would return the melted ice inside.”
I cracked up. 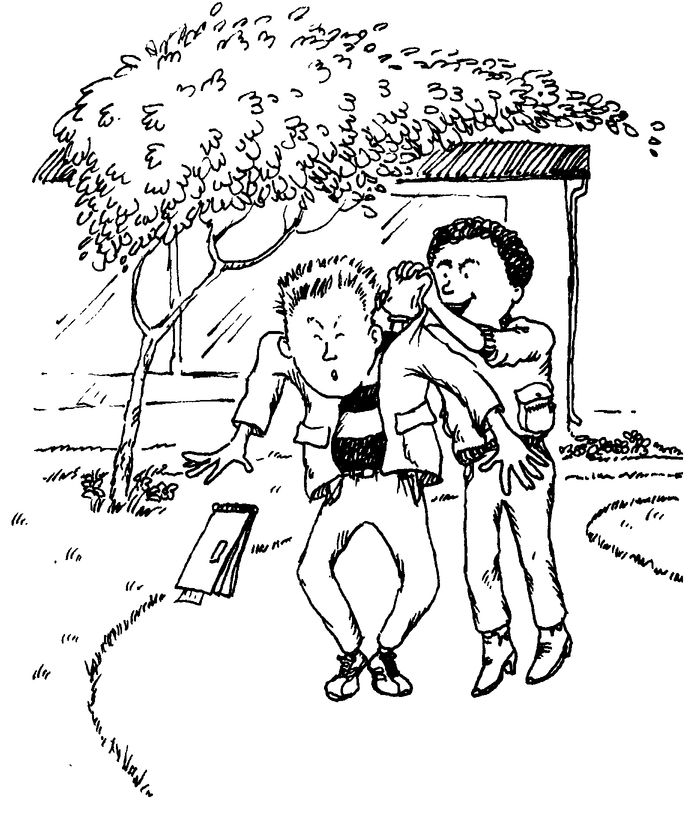 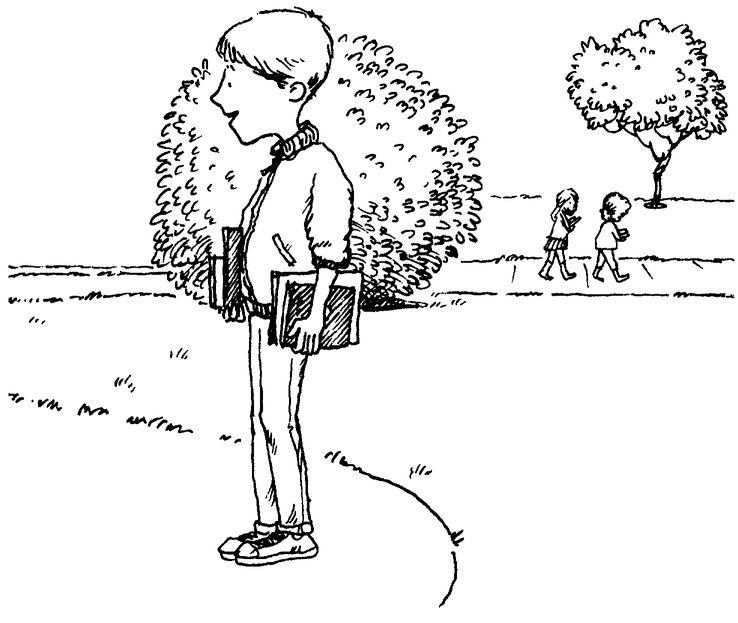 “Ol' Sidney had it coming,” Harry mumbled.
I waited at the school steps while Harry returned the empty bottle to the nurse.
Sometimes when Harry tells you he's going to do something, he leaves the horrible part out.
Horrible Harry and the Deadly Fish Tank

We
have a fish tank in Room 2B. Last time Harry and I counted there were twenty-five fish swimming around in it.
Twenty guppies.
Four neon fish.
And one black molly.
Then there was horrible Monday. This is how it happened.
Sidney came to school mad. He was mad about Harry putting ice water down his back on Friday.
Even his hair looked angry. It stood on end. Sidney probably didn't bother combing it.
Miss Mackle looked at the Monitor Chart. “Boys and girls, I will announce the week's new monitors. Sidney is Messenger, Doug is Paper Monitor, Ida is Ant Monitor, Mary is Plant Monitor, Song Lee is Sweeper, and ...” When she finally got to Harry, she said, “Harry is Fish Monitor.”
Harry immediately got up and went back to feed the fish. He turned on the light in the tank and took roll. Carefully he recorded the number in the Fish Roll Book.
Then he checked the temperature. It was in the green part of the thermometerâin the 70-80 degree range.
At lunchtime, Harry fed the fish and then lined up behind me in the cafeteria. “I have my favorite dessert, Doug, he said. ”Two pieces of Mom's homemade fudge. I'm saving it for us on the way home from school.”
I drooled. I know how good Harry's mother's fudge was. Chocolatey, nutty, and mmmmmmmm good. 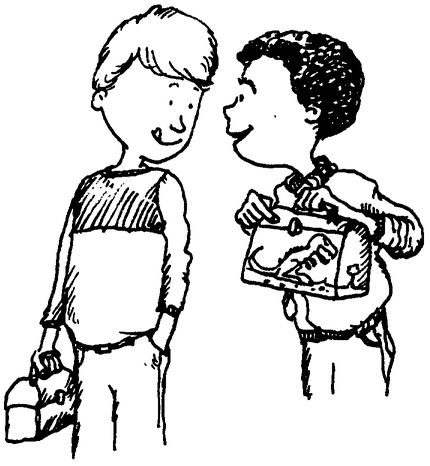 After lunch when we were working on math, Harry walked back to check the tank. The he shouted, “The black molly is floating on the water. She's DEAD!”
Everyone rushed back to the tank.
Miss Mackle opened the cover of the tank and took out the net. She scooped up the dead fish. Then she put her finger in the water. “Why, the water is hot! Someone has been fooling with the temperature knob.” 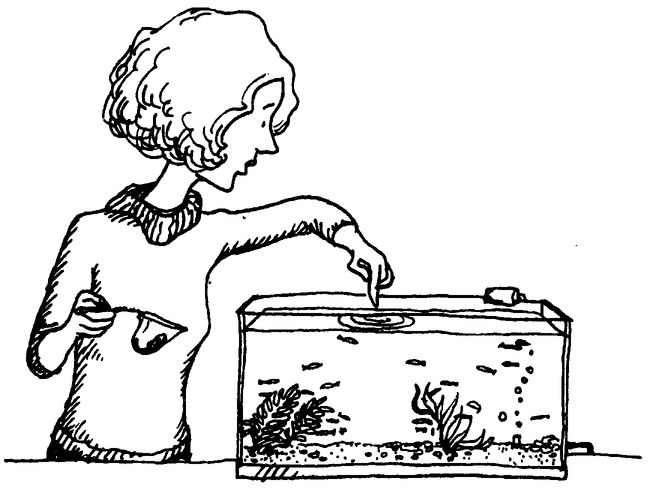