BOOK: Isis
>>DOWNLOAD HERE >>READ ONLINE NOW
ads
A trapeze act.
He gasped and groaned and shouted a quick curse as if something had caused him to fumble, and his hands slipped.
I reached up again. I wasn’t afraid at all, for Harvey was not only half of the Great Villiers Brother-and-Sister Trapeze Act, but he would not fail.
He was a golden boy in a world of brass and tin.
I would learn later that Harvey had leaned so far out the window to draw me upward that he lost his balance and his knee gave out and he tripped over the window ledge.
All I knew, as I opened my eyes in that second, was that he had somehow managed to grab me in an embrace—and we were falling—and it was so fast that it was not like falling to the ground at all, but like sliding along a floor toward a stone wall.
Harvey hugged me close as we fell. I do not remember landing, nor do I remember how solidly he managed to embrace me in that endless fragment of a breath that was our fall, but he would not let me go. I remembered his lavender smell, overwhelming me with sweet scent.
He cushioned me just as a bolt of lightning seemed to flash behind my eyes, and I closed them knowing we had landed on the flagstones. 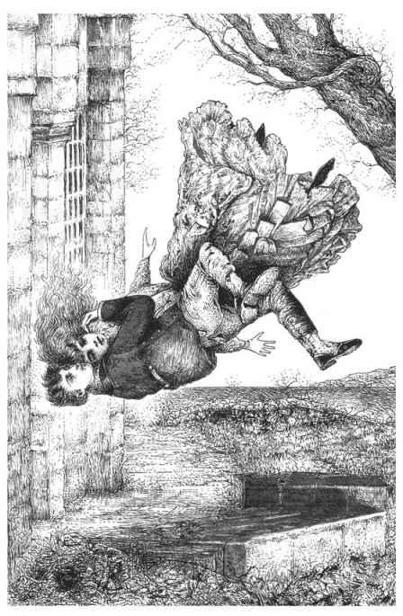 Something changed inside me during that fall. It was as if a window lifted in my mind, and I could see something I had not noticed a moment earlier. Yet, I did not understand what I saw—what I felt. It was as if a switch had been turned, and a room that had once been darkened became illuminated. I heard a voice whisper to me,
Jack, swing up, and Jack swing down, up to the window, over the ground. Swing over the field and the garden wall—
I opened my eyes. I felt pain in my back and along my legs and arms, but I was alive. It seemed someone had put a mattress down below, and yet I knew no one had.
Harvey had been my mattress, my cradle.
He lay there, beneath me, holding me tight, his head smashed on the stones and a calm pool of blood beside him, diluted by raindrops.
I finished the rhyme for him, in my head, the voice of a little girl on a swing tied by rope to the thick branch of a tree.
But watch out for Jack Hackaway if you should fall.