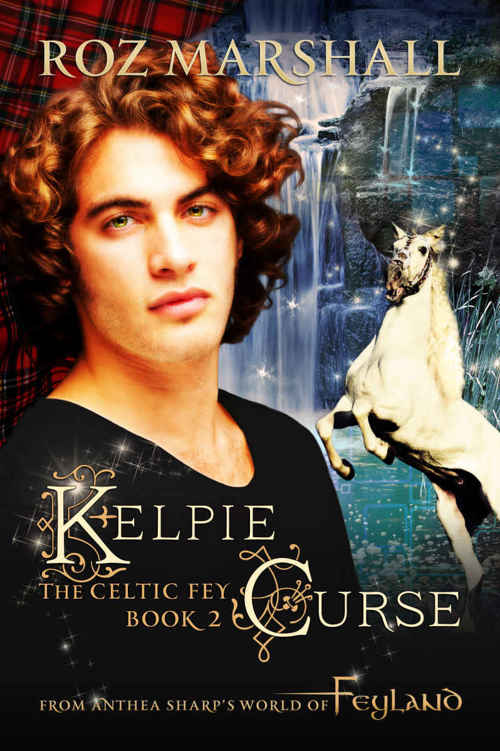 A note from the author

This book or any portion thereof may not be reproduced or used in any manner whatsoever without the express written permission of the publisher except for the use of brief quotations in a book review. You must not circulate this book in any format.

The characters, places and events portrayed in this book are fictitious. Any similarity to real persons, living or dead, or to actual events or locales is entirely coincidental.

This book is licensed for your personal enjoyment only.

Find out more about the author and upcoming books online at
www.rozmarshall.co.uk

Get a FREE short story—sign up for my newsletter:
http://eepurl.com/HMC0D

Legends aren't supposed to come to life. Someone should've told that to the developers of the virtual reality game
Feyland
.

And your life isn't supposed to become a legend. But for Elphin the minstrel, his life resembles a fairytale. One of those dark fairy stories that gives you nightmares and wakes you screaming in the dark.

Trapped by an evil crone in the icy wastes of the faerie realm, his future seems hopeless—until he meets Scots teenager Corinne MacArthur, who stumbles into his life via the high-tech computer game
Feyland
.

She holds the key to his deliverance—if he can only keep her safe from the otherworldly creatures who inhabit the realm.

It's no small task for a peaceable troubadour in a land which blurs the lines between reality and fantasy, where magic is a stock-in-trade, and where the improbable is a daily occurrence…

“Once you eliminate the impossible,
whatever remains, no matter how improbable,
must be the truth.”

S
TANDING
IN
THE
shadow of the silvery rowan trees, Elphin's heart was heavy as he watched the girl and the unicorn stride off down the hill.
If only I could go with them.
But this magical circle was a boundary between worlds—a boundary that he was unable to cross.

In the fading light of the Scottish gloaming, the glow of happiness surrounding Corinne and the fey animal was almost palpable. What if she was so entranced with the grey that she never returned to Feyland?

A niggle of worry ate at his soul.
What if I never see her again?
The unicorn, in its non-magical horse form, would surely ease the burden of sorrow she so obviously carried. So what reason would she have to return?

And what would become of him if she did not?

She did not know—could not know—that their fates were inextricably linked, improbable as it sounded; or that Feyland was not the simple game she seemed to think it was.

But
he
knew, to his cost, just how treacherous the fey realm could be. And he had discovered, in these last days, that he needed Corinne's help to escape his dark fate.

As the horse and the girl vanished from sight, her hand on its glossy white flank and her soft brown hair gleaming in the sun's last rays, Elphin squared his shoulders and turned back towards the forest.
Maybe the unicorn will be good for her, in her real world.
He wanted her to be happy, he truly did.

In the meantime, he would just have to survive here for another hour, another day, another week, another…
Please, not another year!
Now that he had seen a glimpse of what might come to pass, of the real world so tantalisingly out-of-reach beyond these borders, he did not know if he could bear it here much longer. But for things to change, he needed Corinne to come back into Feyland, and he needed her to…

With a sigh, he looked down at his tattered tunic and his ruined body. He could not alter what Corinne would choose to do; he could only hope.

P
HEMIE
GLANCED
AT
the carriage clock on the mantelpiece and frowned. Who could be knocking on her door so late at night?

Knotting her burgundy dressing gown tightly around her waist and stuffing her feet into paisley-patterned slippers, she put her book down and shuffled through the hallway of the farmhouse, pulling a stout walking stick out of the umbrella stand as she passed.
Just in case.

The security chain only gave her about three inches of view, but the sight on her front step caused a sharp intake of breath.

Opening the door properly, she moved into the porch.

"Mrs Irving," said the teenage girl standing in the pool of brightness from the security light outside. Dark skinny jeans and a canvas jacket made her slight frame seem even slimmer than she actually was, and her long, chestnut-brown hair fell in a curtain half over her face, in that way youngsters seemed to favour these days.

"Aye, I recognised you."
Poor lassie's horse died last month.
She jerked her chin at the horse standing behind the teenager. "Did one of the horses get out?"

"Uh—no." Corinne glanced back at the grey. "I— I found him. I was out for a walk and he was grazing there on his own. Nobody was around—I shouted and shouted. So I thought he'd be safer if I brought him here." She put a hand on the horse's nose. "Can he stay at the farm tonight? I'm sure he won't be any trouble. I can look for his owners again in the morning."

Stepping down from the porch, Phemie cast a quick eye over the grey. He seemed uninjured. "You're sure he hadn't dumped his rider somewhere?"

Or bridle.
"And he just followed you here?"

Wrapping a protective arm around the horse's nose, Corinne nodded.

Phemie narrowed her eyes again, then glanced up at the sky. Wisps of cloud were dark fragments against the deep navy of almost-dark. The good weather was holding. "Put him in the front paddock with the sheep. He can't cause too much trouble there. We'll sort him out in the daylight."

"Thanks!" The girl's smile lit her elfin features, and she gently pushed the horse's nose around, steering him towards the gate.

"You
will
come back in the morning, won't you?" Phemie would be busy with the harvest tomorrow. She didn't need to be worrying about an orphan horse.

Corinne stopped and looked back over her shoulder. "Of course." The horse's feet stopped moving as soon as the girl halted, like they were somehow in tune with each other.

"Where did you say you found him again?"

Chessaig. Faerie Hill.
Curiouser and curiouser.
She pursed her lips. "Put him in the field. I'll see you in the morning."

"There
you are!" Her mother's voice was sharper than normal as Corinne pulled her key out of the lock and closed the front door behind her. "I was getting worried about you. Where
were
you till this time of night?"

"I'm sorry, Mum." Corinne shrugged off her jacket and hung it on the birch coat rack by the door. "Something… something strange happened on my walk."

"Strange?" The word came out an octave higher than normal, and mother's eyebrows disappeared somewhere up under her hairline. "Did someone…? I
knew
I shouldn't have let you go out so late on your own! Are you okay? What happened? Do I need to call the police?"

Holding her palms in front of her, Corinne took a step backwards. "No, nothing happened. Well, nothing bad, anyway."

"What!" Mother's eyes were starting to bulge, and a pulse was throbbing in her neck.

I'm not doing a very good job of explaining this.
She should've rehearsed what she was going to say on the way home, instead of daydreaming about the unicorn. At this rate, mother was going to have a heart attack before she even had the chance to ask if she could keep him. "I just— I found a horse. A lost horse. At the top of Chessaig—you know—"

"Midnight's favourite ride," her mother interrupted. "Yes, I remember. So, you found a horse. All on its own?"

"Are you sure? Why would it be on its own? Are you
sure
there wasn't a rider lying injured somewhere?"

"So what did you do with it?" Mother had calmed somewhat, and her face was only pink, rather than bright red.

"I took him down to the farm. Mrs—Miss Irving let me put him in the front paddock. I have to go back in the morning and we'll look for his owners."

"We should phone the police. Just in case some poor rider's gone missing." Stepping towards the telephone mounted on the wall by the kitchen, mother started punching numbers into the plastic handset. "What colour did you say it was?"

"Grey." Then Corinne remembered how confusing that was for non-horsey people. "As in white. About sixteen hands." She held up a hand at head-height, palm downwards.

Unicorn
. But she couldn't say that. "Thoroughbred cross, probably."

Five minutes later, her mother had reported the lost horse and established that nobody had reported any missing horses or people in the local area. "We're to phone again in the morning," she said, replacing the phone. "Just in case anyone reports a missing horse overnight."

That would be a bit of a miracle.

Wasn't it strange, how she was now accepting the seemingly impossible—a unicorn from a virtual reality game stepping through a stone circle and appearing in real-life Scotland as a white horse—as reality? But this whole day had been unreal, from the moment she'd gone back into the game and found the unicorn in Feyland, to Elphin being chased by the rabid dogs of the Wild Hunt and them both escaping on the unicorn across Rainbow Bridge just like Tam O'Shanter on his horse. It was like her dreams—or nightmares—from the previous night had come true.

Except that today had a happy ending.

Remembering the unicorn's velvety nose nuzzling her palm, a glow of optimism filled her chest. Maybe the girls at the farm would stop giving her a hard time about Midnight's death. After all, it hadn't been
her
fault he'd got sick; perhaps they'd see that now.

"Mum," she crossed her fingers behind her back, "if nobody claims the horse, could I… Could I keep him?" The last words came out in a rush. "You
did
say I could get a new horse for my birthday?"

Her mother looked sideways at her. "I thought you said you weren't ready to get another one?"

Brown eyes gazed levelly at her for a few seconds. "We'll see. But don't get your hopes up. If he's that special, I'm sure someone will report him missing."

'Officer, it's the Faerie Queen here. I'm calling to report a missing unicorn.'
Like that would go down well.

I hope so. No more bad dreams.
The warm glow in her chest bloomed again.
Just dreams.
Good
dreams, of long, hot summer days and a handsome white unicorn. And hope for their future together.

Bounding up the stairs two at a time, she smiled to herself.
I deserve some good luck for a change.

B
UT
HER
DREAMS
weren't good. More like nightmares.

The slavering hellhounds from the Wild Hunt were in full war cry, chasing the mysterious minstrel she'd first seen at the Bright King's court in Feyland.

In her dream, the minstrel raced frantically through the dense forest, copper curls plastered to his sweat-sheened forehead and plaid cloak streaming behind him like a flag. The hounds were at his heels when a blue-faced hag appeared from nowhere and threw up an arm. Instantly, a wall of ice formed behind the minstrel, stopping the hunt in its tracks—and entombing him in its freezing clutches.

Hillerman, Tony - [Leaphorn & Chee 02] by Dance Hall Of The Dead (v1[1].0) [html, jpg]
Baxter by Ellen Miles
The Nice and the Good by Iris Murdoch
The Water Museum by Luis Alberto Urrea
White Lies by Sara Wood
Any Witch Way by Annastaysia Savage
Bloodstone by Sydney Bristow
The Great Bazaar and Other Stories by Peter V. Brett
God's War by Kameron Hurley
Elizabeth and the Vampire's Cabin by Leilani Allmon