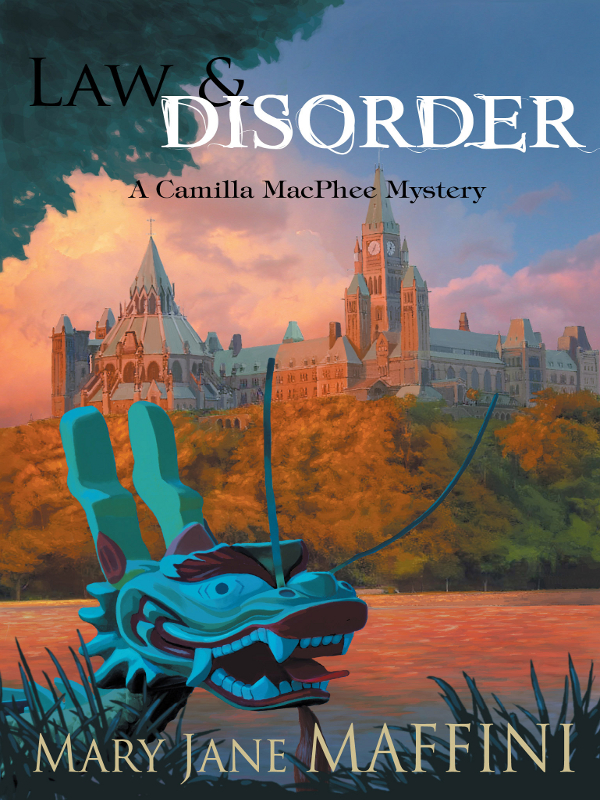 All rights reserved. No part of this publication may be reproduced, stored in a retrieval system or transmitted, in any form or by any means, digital, mechanical, photocopying, recording or otherwise, without the prior consent of the publisher.

How do you keep a lawyer from drowning?
-Shoot him before he hits the water.

L
ess than two short weeks after I’d shoved my thermal socks to the back of the drawer, the temperature hit 32° Celsius with a humidex reading of 40°. Welcome to June in Canada’s capital.

I blotted my forehead with one hand as I chugged up the wide stone stairs to the Elgin Street courthouse. The excellent air conditioning system in the building was only a secondary factor in my decision to spend the morning in court. It seemed like the right day to look into a murderer’s eyes as his seemingly endless trial drew to a close. I was looking forward to the final arguments. Lloyd Brugel was about to get what was coming to him: a guilty verdict. In time, that would be reflected in an appropriate sentence: twenty-five years without parole if not actual dangerous offender status. But one step at a time. Conviction first.

Don’t take my word about Brugel. Ask any of the kids who found themselves hooked on crack cocaine at bargain introductory prices or the fifteen-year-olds who were forced into prostitution. Or pick one of the hundreds of broken people who got in his way. I knew many of his victims personally. I wished more of them were alive to see Brugel go down. I tried to resist rubbing my hands in glee, but only because that would have meant spilling my iced cappuccino.

In the course of the trial and the interminable months leading up to it, I’d repeatedly reminded myself of the principles of law that keep me going:

The right to representation? No argument.

In spite of all that, I believed Brugel was guilty from the second he was frog-marched out of Red Roxxxy’s, the sleazy strip joint where he based his underground kingdom. I had done a little dance when I’d first heard the news. Hey, appropriate is not my middle name. I planned on doing a joyful jig when the sentence was read. I just hoped I wouldn’t throw my back out.

In the foyer near courtroom 23, I narrowly avoided Sergeant Leonard Mombourquette slithering out of the elevator.

“Hey, Leonard, watch out for your—”

“Don’t start with me, MacPhee,” he said, narrowing his beady eyes. “I’m one month from retirement, and I’m facing a lot of paperwork.”

Fair enough. Mombourquette had been my brother-in-law Conn McCracken’s partner in Major Crimes for more years than I could count. Even though Conn now wasted his days on the golf course, I saw no harm in being civil to his former partner, this once. With his soft, greyish skin, twitchy nose and missing chin, Mombourquette might be the spitting image of a rodent, but, after all, he was
our
rodent. Practically a family pet. He not only continued to hang out with that same brother-in-law and my sister, but he seemed to have a thing going with my old buddy Elaine Ekstein, the well-known rogue social worker. All to say, opposites attract and there’s no accounting for tastes and any more aphorisms anyone else would care to contribute.

Before we could enter, we idled by the metal detector outside the courtroom, and I made nice while the female police officer checked the contents of my handbag and we went through the detector one at a time. “So, Leonard, you here to see Brugel go down? Payoff time?”

“You betcha. Wouldn’t miss it. Seeing that scumbag convicted will be the highlight of my year. Maybe even two years. Worth not retiring last winter just to savour it.”

“For me too. I wish Laurie Roulay was still alive to see it.”

Mombourquette shook his head. “That was a real shame about that girl. Thorsten sure took her apart on the stand.”

I paused, thinking before I spoke. Laurie Roulay’s suicide two weeks after her testimony had shaken me badly. After a moment, I managed to say, “It was brutal. There’s no trick too low for our Rollie. I’m glad Laurie held together long enough to testify. Her testimony will help sink Brugel. I wish I’d realized how fragile she was.”

“But hey, Leonard, not even that scum-sucking bottomdweller Thorsten could get Brugel off this time.”

An assistant Crown attorney swung past us in the hallway, his black gown billowing. He snickered and called back over his shoulder, “Don’t hold back, MacPhee. How do you really feel about Thorsten?”

Mombourquette pulled out a handkerchief and wiped the back of his neck. “Gonna be a scorcher. Enough to make you hope the trial drags on until July. I’d like it to be cool for my remaining days.”

“One hundred and sixty hours, but who’s counting.”

You would think, with a case of this magnitude, that courtroom 23 would be standing room only, but there were fewer than twenty people in the room, not counting judge, jury, plaintiffs, court staff, cops, and a solitary reporter. Even so, the early morning scents of aftershave and fruity shampoo were gradually being replaced by sweat and overheated footwear. The few people in the room were buzzing softly. Madam Justice Pierrette Lafontaine sat purse-lipped at the bench. I wondered idly what that would do to her signature red lipstick. My sisters tell me that’s a dated look, but on Judge Lafontaine, it sent a powerful message: Don’t mess with me or I’ll drink your blood. She feared nothing. Especially not passing trends. Maybe that’s why I always admired her.

The Crown attorney fidgeted like a kid awaiting Christmas morning. Would Santa bring him closing arguments that would lead to a conviction? And eventually a life sentence? Or would some small word or concern reduce the sentence to the lower end of the scale? Twenty-five with no parole would be good for the Crown attorney’s career. It would help in moving up and out.

I glanced around for my friend P. J. Lynch, who covered the courts for the
Ottawa Citizen
, but there was no sign of his carrot top and gap-toothed grin.

In between eyeing the prisoner’s dock with amusement, the Crown appeared to be flirting with his blonde colleague. I assumed she was a new assistant Crown and I figured the ink wasn’t dry on her yet. The rumour among those who cared was that she was so good, she would leave him in the dust. I certainly hoped so.

There were no legal aid lawyers for Brugel. He could afford to hire and fire the very best. Rollie was Brugel’s third lawyer and perhaps his most expensive.

On the right side of the line of lawyers, a thin and jittery young man glanced behind him, his forehead furrowed in concern. He was wearing a navy suit that seemed to have been intended for a larger man. From my previous court visits, I recognized Jamie Kilpatrick. He loosened his white shirt collar with his fingers. I knew he was the one junior lawyer that Rollie had on his payroll. In this case, rumour had it that the indentured serf took care of all the work, while Rollie did whatever you do when you’re a scum-sucking bottom dweller. Although right at that moment, the scum-sucker was nowhere to be seen. The hapless Jamie seemed even more nervous than usual.

Maybe Rollie was in the men’s room, adjusting his handmade silk tie. He was as expensive as he was effective, and he did look very good in Harry Rosen suits. I took comfort in the thought that even he was not likely to win this time.

Wading Into War: A Benjamin Wade Mystery by Scott Dennis Parker
Covered in Coal by Silla Webb
The Necromancer by Scott, Michael
Natural Magick by Barton, Kathi S.
Within That Room! by John Russell Fearn
Fizzlebert Stump by A. F. Harrold
Fall of Night (Dead of Night Series) by Jonathan Maberry
The Dancing Master (Stolen Moments) by Alexander, Paris
Deceive (Book 1 in the Deceive series) by Karessa Mann
Reverend Cash: Let Us Prey by Sa'id Salaam