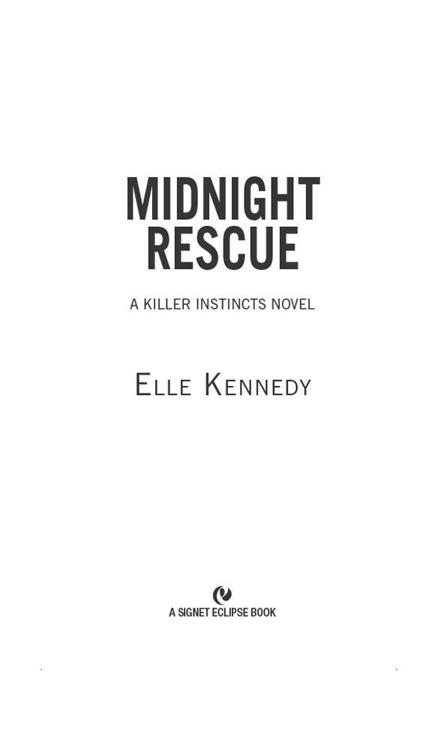 “With a large cast of colorful characters, multiple intertwined plot threads, and sick, twisted villains,
Midnight Rescue
is a high-stakes story about overcoming the darkest, most depraved side of humanity. Fans will be eager to see what Ms. Kennedy has in store for her mercenaries.”

Praise for Elle Kennedy
and Her Other Novels

“[A] heart-wrenching, sensual story that will make you laugh and cry as the characters come to life before your very eyes… this is one emotional roller-coaster ride you don’t want to miss.”

Published by New American Library, a division of

Writing a book is a solitary process, but I couldn’t have done it without the support, guidance, and encouragement of some very wonderful people:

Jesse Feldman, my editor at NAL, whose advice is always spot-on and whose faith in this series is utterly contagious.

My agent, Don Fehr at Trident Media Group, for taking me under his wing and finding this series a good home.

And, of course, my family and friends, who continue to encourage me—and who don’t take offense when I repeatedly cancel plans by giving my trademark excuse: I have to write!

“Are you ready to talk?”

Abby cranked open her right eye—the left one was too swollen—and stared up at the harsh face of her captor. It was an unpleasant face, a menacing one. Pale blue eyes cold enough to freeze an ocean, hollow cheeks, a two-inch diagonal scar slicing his left cheek.

His thin lips curled in an angry frown. “Who are you? Who do you work for?”

Gripping the whip in one hand, he crept closer, catlike. “Still determined to stay quiet?” He smirked. “That will change. A few more visits with me and you’ll reconsider.”

He raised the whip high over his head. It sliced through the air with a hiss and connected with her bare stomach. Pain jolted through her.

Block it out. They can hurt you only if you let them.

The whip slapped her thighs. Her hands were bound,
tied to a rusty pipe over her head. Her feet suffered the same fate, attached to a metal peg protruding from the cold stone floor. The room smelled like sweat and blood.

He can’t hurt you.

Abby repeated the mantra in her head, hoping to convince her aching, bleeding body that the whip couldn’t hurt it. She didn’t know how much longer she could take this.

“Turn her around,” Devlin ordered the silent guard by the door. “No need to damage those breasts any further.” He leaned closer, his faint British accent becoming more pronounced as he murmured, “Are they real, luv? I’d bet they are.” He touched the bloody welt on her right breast, then pinched her nipple.

Abby spat in his face.

“Bitch.” He retaliated with a vicious backhand.

The guard approached and turned her body around without untying any of the ropes. Her wrists twisted in an unnatural way, drawing a soundless yelp of pain from her swollen lips. One wrist was definitely sprained, if not broken.

“Who are you?” Devlin whispered in her ear. His hot breath fanned across her neck in a sadistic caress.

She mumbled something under her breath.

He pulled her hair. Hard. Almost tugging it out by the roots. “What was that?”

“I said I’m your worst nightmare.”

He threw his head back and laughed. “Ah, I knew you weren’t the pussycat Blanco claimed you were. I had your number the moment you spilled your drink in his lap at the bistro.” He chuckled. “Clumsy, clumsy Erica,
with her big blue eyes and fragile little body. What’s your real name, luv? C’mon, tell me. It’ll be our little secret.”

She feigned boredom. “Call me whatever you want, Devlin.”

Devlin dragged one finger along her spine. “I admit I liked you better when you were refusing to talk.”

He made a
tsk
ing noise and stepped away. A second later the whip cut into her lower back.

The whip sliced her skin.

“It’ll be better for both of us if you talk. I truly hate hurting you like this.”

She fought a wave of nausea. Her ears started to buzz. “Liar,” she said, wheezing. “You love every minute of what you’re doing to me.”

He gave a deep laugh. “Ah, but there might be some truth to that.”

Another lash. Two more. Three. Water poured down her skin. No, not water. Blood. The stench of it filled the air. Oh God, her body hurt. Ted had really worked her over this time.

No, not Ted. That was a long time ago. Wasn’t it? Her head started to spin. Nothing made sense anymore.

She bit her lip. It bled.

He raised his fist and a second later it came crashing down on her jaw.

Then everything went black.

Block it out. Sit up.

She tried again, this time managing to lift herself up. As she nearly keeled over, she braced her hand on the cold ground to steady herself. Bad idea. Her broken wrist objected to being put into use.

Blood drumming in her ears.

When she came to the second time, the faint sound of voices drifted from the end of the dark hall. They would come for her again. Soon. But she wasn’t going to talk, no matter how many beatings they forced her to endure. It would get worse. She knew it would. Soon the beatings would become rapes and the rapes would become torture. But torture would not lead to death. Oh no. Blanco wanted her alive.

She drew in a breath, hoping the oxygen might clear her foggy head. She wiggled her right foot, tilting it to make sure the flesh-colored Band-Aid was still attached to her skin. It was, and she felt the tiny metal key digging into the sole of her foot. She’d swiped the key from one of the guards when they first brought her in here. Managed to get it off the key ring and everything—the moron hadn’t even blinked. Picking pockets was just one of the many skills with which Jeremy had supplied her. She wouldn’t use the key, though. Not yet.

Not until the time was right.