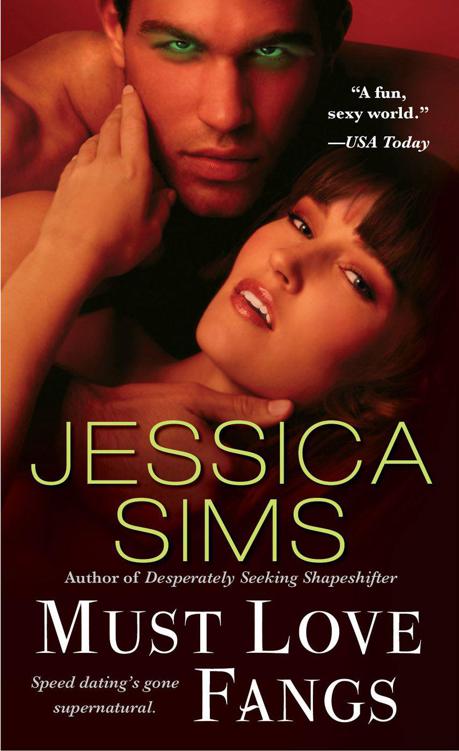 Are
you
curious about what else Midnight Liaisons has to offer?

“Sims unites two terrific characters. . . . Though the romance remains paramount, keeping the wolves at bay provides suspense, and Sara’s strong relationship with her sister is a sweet undercurrent.”

“This skillful blend of humor, emotional turmoil, and enticing chemistry adds up to a terrific and fun-filled read!”

“One of the best shapeshifter romances I’ve read in some time! . . . I have been singing the praises of this book to anyone who will listen.”

“A world that is both dangerous and humorous. Add a heroine who is plucky and brave and a hero who is sexy and powerful, and you get a story filled with sizzle and spark!”

“The adorable relationship between Bathsheba and Beau drives the story and will leave readers eager for more.”

“This page-turning debut . . . possesses humor and a protective male character similar to those of Katie MacAlister. This will likely be a popular series.”

“A fast-paced story that’s got both humor and heat. Beau is a meltingly sexy hero.”

“What an awesome debut book! . . . If you enjoy shifter books, then this is a must-add to your reading list.”

Who always offers commentary on how to fix my plots . . . and never gets mad when I ignore her always excellent suggestions. That’s true friendship!

Thanks for being my sounding board for every book.

W
hen I was a child, my father used to let me stay up late to watch movies with him on Saturday nights. My father had stunningly bad taste in movies. His favorite?
Mothra vs. Godzilla.
I remembered being terrified of the massive, furious creatures that screamed and bellowed as they tore through Tokyo.

Those furious growls and outraged shrieks sounded a bit like what was going on right now in the Midnight Liaisons conference room. No laser beams shooting from eyes, but there was enough snarling to make any human feel on edge.

My boss, Bathsheba Russell, was perched on the corner of my desk, wringing her hands and staring at the front door.

It made it impossible to work, and I shoved my notepad under a stack of papers. “Something I can help with, Bath?”

She glanced over at me, startled, then shook her head. Another round of furious snarls came from the conference room, and she winced as the snarls
turned into shouting. “No, I’m sure they’ll be here soon.”

Well, that was frustrating, and it didn’t bode well for my own plans. I cast an oblique look over at my coworker, Ryder. She widened her eyes and gave me a helpless shrug, as if saying,
What can you do?

Sure, Ryder didn’t care if the boss stuck around for an extra hour or two. It wouldn’t derail her night like it’d derail mine.

And I needed this night.

I needed every single day I had left. When you’re dying, you tend to get a little pissy about wasted time.

The front door opened, and just like that, the conference room got quiet. I could practically hear their shifter ears straining to make out who had just entered. In walked a scowling, lanky young man, hand in hand with a pretty, but frightened, redhead. The girl stared at me fearfully, then looked at Bathsheba as if she’d been about to pounce.

“We’re human,” Bath said in a dry voice. “The ones you need to be scared of are in there.” She gestured at the now-too-quiet conference room.

The boy braced his shoulders and pulled the woman under his protective arm. She went willingly, her face utterly pale. Poor thing. They marched forward toward the conference room.

“They look like they’re heading to a funeral,” I whispered to Bath.

“They might be,” she whispered back. “Vic wants to kill him.”

She flushed when the boy paused in front of the conference room and turned to glare at us.

No one said a thing as the conference room door opened. They stepped in. Closed the door. A pause.

And then tempers exploded all over again.

“How dare you turn a human?” roared Vic. The snarl of the tiger alpha’s voice rose above all others. “What the fuck were you thinking?”

“Then you use this goddamn agency and find yourself a date,” Vic roared again.

“Let’s calm down,” Beau said firmly. The Alliance leader, a were-cougar and Bath’s husband, was usually cool and in control of every situation, but he didn’t sound calm now.

Vic gave another ear-shattering roar, and I heard the gulping cry of the woman.

“She’s still thinking like a human,” Bath said in irritation, getting to her feet. “And they’re going to scare the shit out of her. I’m going in there.”

As she moved toward the conference room, I took off my glasses and pretended to check them for smudges. Act calm. Easy. No problem.

But my heart was racing a mile a minute. My head throbbed with the adrenaline rush. I ignored it, just like I did all the other physiological symptoms lately. I didn’t have time to mess with them.

Ryder pointed at her computer monitor, indicating that she was going to send me an instant message.

I turned to my screen and waited.

I typed back quickly.
What exactly is going on? Did that guy really turn a human?

Yup
, she sent back.
I got here just as they were shoving Sara out the door. You know how B protects her. Ramsey, too.

Sara was Bath’s quiet, delicate sister; she normally hung around the agency until her mate, Ramsey, a were-bear, picked her up in the evening. It seemed that Sara was a werewolf and everyone had known this but me. Humans, always the last to know. But since I worked at a dating agency that catered exclusively to the paranormal, it made sense that someone on staff would be, well, paranormal.

I glanced over at Ryder again. More than
one
someone. Sara was just out of the closet, but Ryder was still in hiding. I put my hands on the keyboard.
So do you have the scoop?

Wellllll,
Ryder typed.
From what I’ve been able to overhear, it sounds like ol’ Johnny fell in love with his girlfriend, and Uncle Vic in there did not approve. So Johnny turned her and decided to ask permission later. Can you believe that?

For a supernatural (or “supe” as we liked to call them) to reveal their true nature to a human was against the rules. To reveal their true nature and then turn a human into a shifter was worse than bad. It caused all kinds of problems. What if they broke up? What were human parents supposed to do with a were-tiger daughter? Who was going to explain why their cute little Lola had to use a scratching post and went gonzo when the catnip was rolled out?

By revealing his true nature to a human, Johnny had endangered everyone in the Alliance. The network was built on a tenuous trust of the other species, and now that had been broken.

And it was going to play havoc with my plans.

As the yelling in the other room increased, I pulled my notepad out again and looked at the list I’d been working on.

I frowned, displeased at how very short it was. Perhaps I was forgetting something? “Hey, Ryder?”

“Hmm?” My coworker dragged her gaze away from the conference room, where it had gotten awfully quiet again.

I tapped my pencil on my desk, thinking as I
stared down at the list. “Can you think of any supernaturals that can turn someone?”

“You know,
turn
someone,” I said. At her suspicious look, I pointed at the conference room, where a low rumbling argument between two men could be heard, interspersed by an occasional higher voice that was probably Bathsheba, trying to interject some common sense into the argument.

But I couldn’t afford to let it rest. I stared down at the paper, thinking, as the voices now rose in the conference room.

“This is abominable!” Vic shouted. “A disgrace!”

Ooo,
abominable
made me think of yeti. Were-yeti? I wrote it down and put a question mark next to it. Then I scratched it out. No one in their right mind wanted to be a yeti. Gross.

I chewed my eraser, thinking. Fae? They were born, not made, but they were also secretive. Maybe they knew something—

The bell clanged against the glass of the front door, signaling that someone had entered the office. I looked up, putting a smile on my face . . .

And sighed with dismay at the sight of the man strolling in. Joshua Russell, my least favorite client ever. “Hi, Josh,” I said in my most bored voice.

He grinned, making a beeline for my desk.

Damn it. I sighed and pushed the notepad under a stack of reports again, then focused my attention
on the tall, sexy man standing in front of my desk. My gaze was just at crotch height, which made things a bit awkward when I was trying to ignore the man.

Suddenly a large, perfect rose appeared under my nose. “For you, beautiful.”

“Yes, but you’re an Alliance human. That’s different,” he said with a devastating grin that would have knocked the panties off any were-cat in the area. “Different is good.”