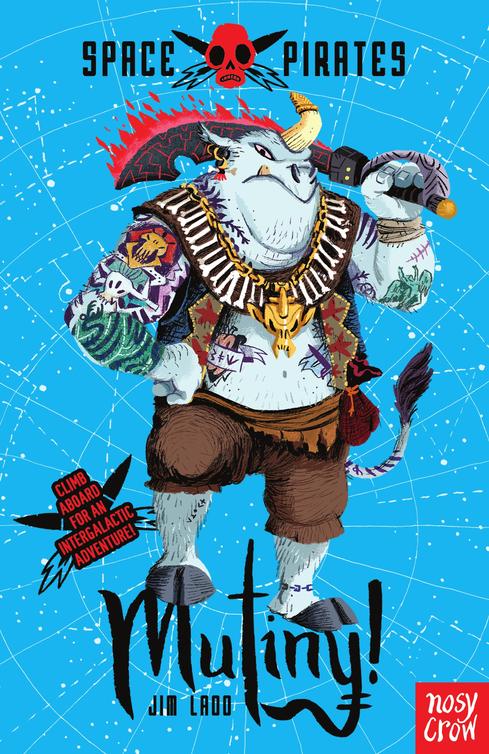 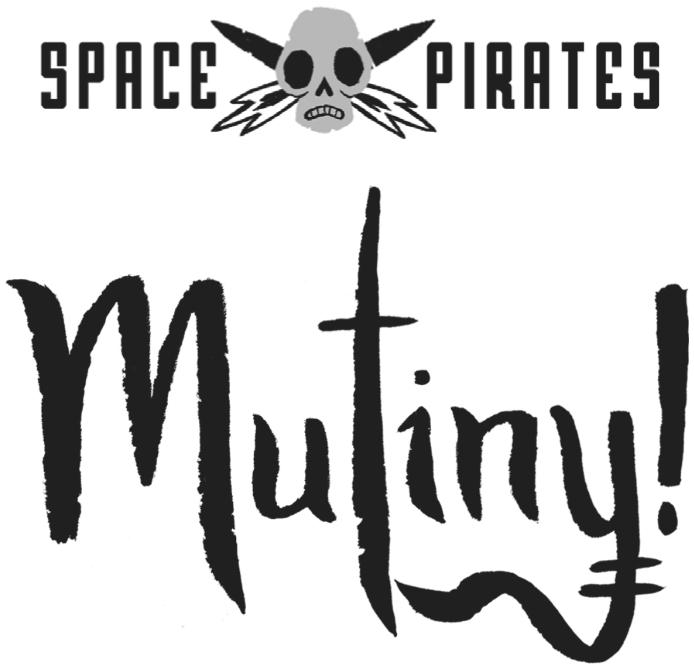 S
am scrambled onboard, heaving himself up and sliding on to the deck belly-first. He lay silently for a minute, his heart pounding and his knees weak. He was so happy to be safely on the ship that he could have kissed the deck but there was no time for that.
This was mutiny! 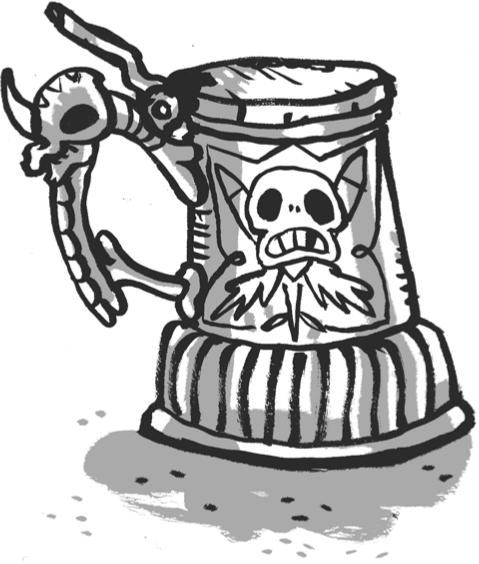 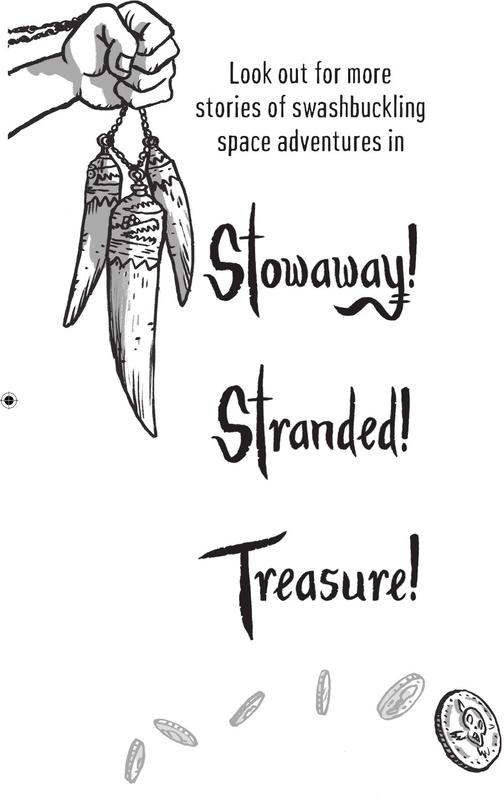 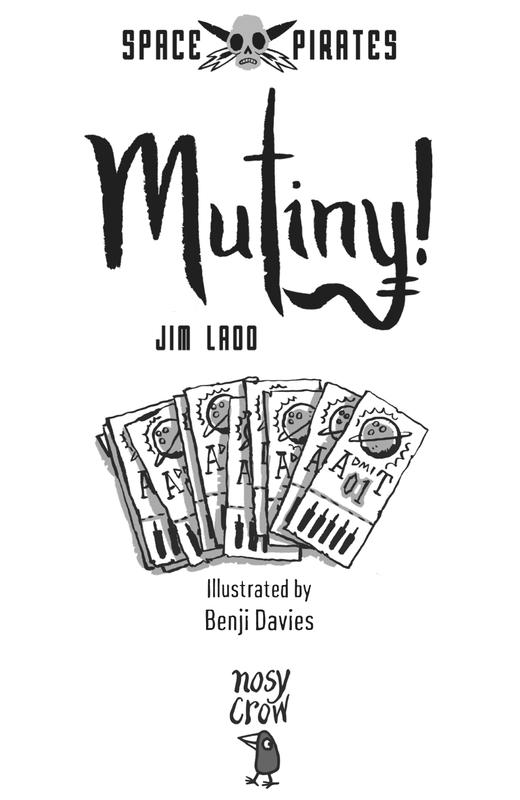 With special thanks to Paul Harrison

To the parentals; steering the ship safely through choppy waters 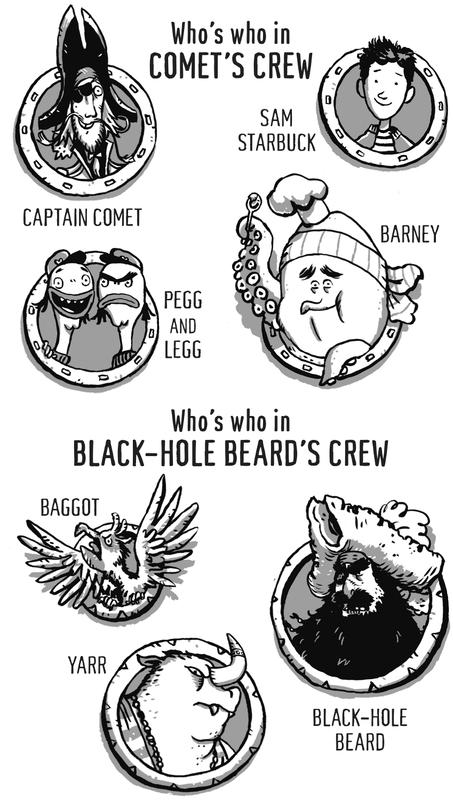 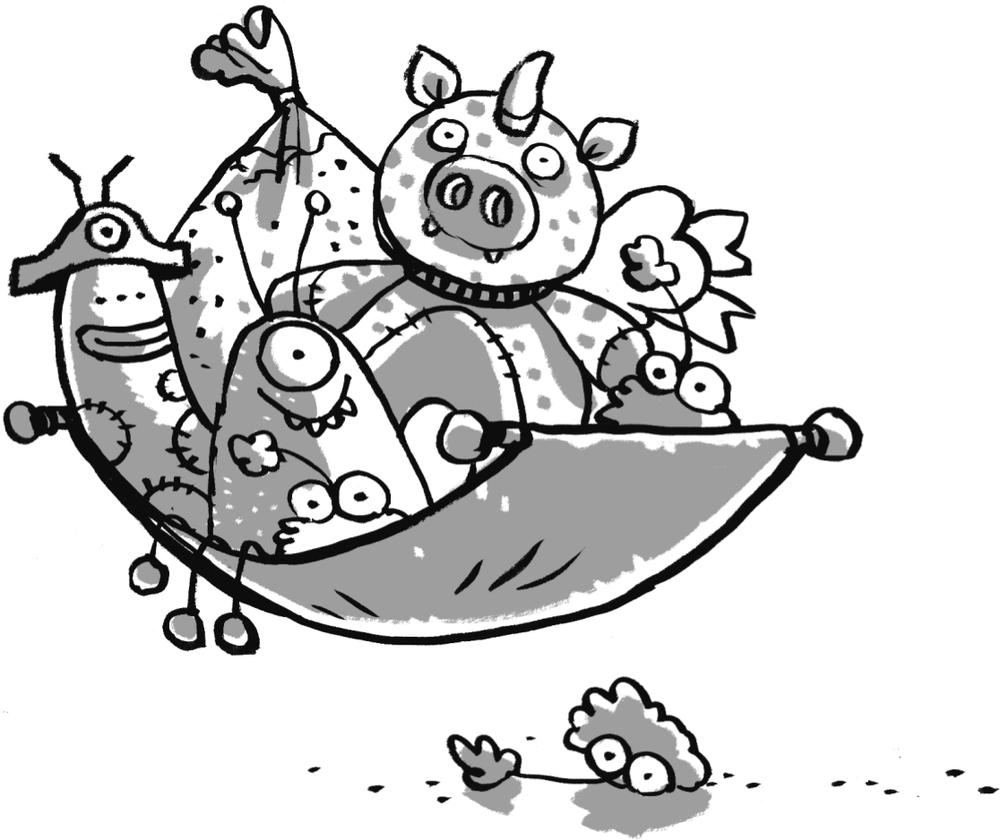 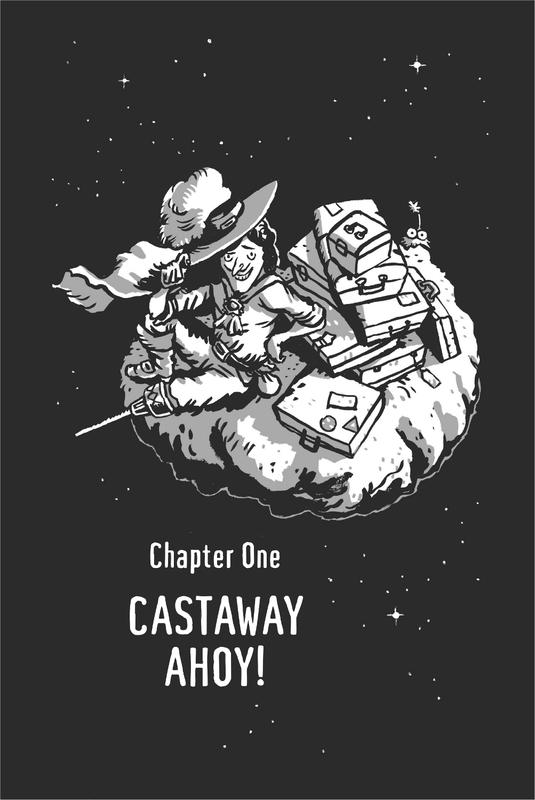 S
amson Starbuck peered at the bowl of food in front of him and wrinkled his nose. Breakfast on board pirate spaceship the
Jolly Apollo
was never good, but today’s looked
awful
. The bowl contained a thick grey liquid halfway between porridge
and
soup, which seemed to be both watery and lumpy at the same time. It smelled of old fish and engine oil.

As Sam stared at the bowl he was sure that something in it moved. Feeling sick, he pushed the bowl away and sat up. All around him in the mess hall, his fellow crew mates were digging into the disgusting gloop hungrily.

“How can you eat that?” Sam asked Piole, the pirate sitting next to him. “It’s revolting!”

Piole turned to look at Sam, food dribbling from three of his twelve mouths.

“The food here is
always
revolting,” Piole replied. “But it’s the only food we get so you may as well make the most of it. Aren’t you eating yours?”

“No, do you want it?” Sam knew the answer
already – Piole would eat just about anything.

“Cheers, me hearty!” said Piole, swapping Sam’s bowl for his own empty one.

Sam felt the slap of a large tentacle on his shoulder and turned to see Barney, the ship’s cook, standing behind him. Although Barney looked fearsome – he was a gigantic,
multi-tentacled
Kraken – he was actually Sam’s best friend.

“Morning, Sam,” said Barney. “Finished already? You must be growing – here, have some more!”

He slopped out another ladleful of the disgusting gloop into the empty bowl before wandering off, whistling a merry space shanty to himself. Sam groaned and leaned his head on the table.

“Growing?” Romero, the huge lobster-clawed snippernaut, guffawed. “Sam could grow for a Traxonion year and he’d still be a space sprat!”

“Hey!” Sam protested as the other pirates laughed.

“Aye, aye, shipmate,” said Captain Comet to Sam, plonking himself down on the bench.

Comet was one of the most extravagantly dressed space pirates in the Universe. He liked bright frock coats and always wore a tricorn hat. He had eye patches covering two of his three eyes and a long waxed moustache that stuck out from each side of his face like curled wire.

Comet might look like a perfect pirate, but Sam knew he and his crew were widely regarded as the most useless space pirates in all the known galaxies – and probably the unknown galaxies as well. However, beneath all the bluster, bragging, incompetence and cowardice, Captain Comet had a heart of gold and truly cared for his crew.

Which was just as well, because Sam had joined the
Jolly Apollo
to try and rescue his parents, who had been space-shipwrecked on the mysterious Planet X. The pirates were only too happy to help. The planet was rumoured to be made of solid gold. And Sam had a map of how to get there!

Sam picked up his bowl. The grey sludge shuddered and a bubble popped at the surface, releasing a smell like the inside of an old bowling shoe.

“Oh,” said Comet. “It
is
that bad.” He grimaced and pushed the bowl towards Piole, who gave the captain a cheery wink. 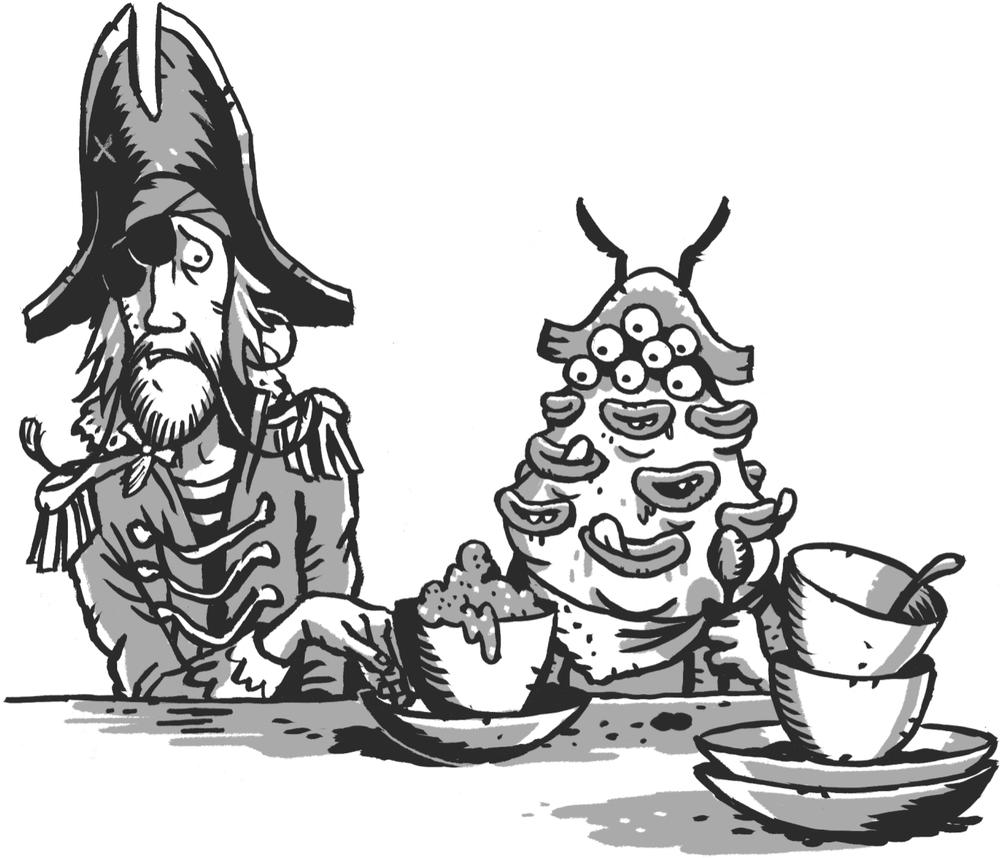 “Anyhow,” Comet continued, “I thought you’d like a quick status update – we’re making good progress. We’ve passed the Corkscrew Galaxy and I think we should reach this wormhole soon.” He pointed to the scrap of spacesuit material on which Sam’s mother had drawn the map.

Sam raised his head and looked at it excitedly. They were getting closer by the minute! And they had managed not to get lost for three days now – a
Jolly Apollo
record.

The shout from the crow’s nest was loud and clear, even down in the mess hall.

“A-ha, sounds like we’ve spotted someone,” said Comet. “Some poor hapless soul, cast adrift on a barren rock with their meagre possessions. They’re lucky we’ve found them; I’ve heard of castaways going mad from loneliness, or getting so hungry they’ve been reduced to eating their own socks.”

Sam gulped as he thought about his own parents stranded on the distant Planet X.
But they
wouldn’t
have to eat their own socks,
Sam thought
to himself
. They’re both botanists, and they know everything there is to know about planets from all over the galaxy. They’ll definitely be able to find food, even on a barren planet that’s supposed to be made of gold. Won’t they?

Comet rose from the bench and interrupted Sam’s thoughts. “Let’s go and see who it is,” he said.

Sam trooped up to the main deck with the crew, all eager to catch a glimpse of who it was the lookout had spotted. In the distance they could see someone waving from a large asteroid.

“Set a course for the asteroid please, Mr Pegg and Mr Legg,” Comet called to the two-headed first mate who was steering the
Jolly Apollo
. Legg, the happier head, saluted sharply, while Pegg concentrated on the wheel.

The asteroid was small and round, barely big enough for a bowling lane, and piled high with suitcases. The castaway didn’t seem too upset about being stranded. Leaning against a
couple of his suitcases, he calmly waved to the approaching ship as if he didn’t much care if they stopped or not. Sam frowned as he looked at him. The stowaway didn’t look like he was marooned and desperate. He was wearing a gold-coloured cape over some pretty fancy pirate clothes and had a gold peg leg.

As the
Apollo
pulled alongside the stranger he tossed his head, flicking his wild black hair away from his face.

“Ahoy, me hearties!” he shouted in a deep voice. “What took you so long?”

He dropped a rope ladder down to the asteroid and turned to Sam. “Rule fifty-six, paragraph three of the pirate code,” he explained. “You always pick up a castaway. Now just watch his face when he realises he’s been rescued by the famous Captain Joseph Hercules Invictus Comet!”

Sam held back a laugh. Comet rushed to put
on his formal hat, the one with the extra-large feather, then perched on the side of the spaceship and gave a nonchalant salute to the crew before throwing his feet over the ship’s rails. Unfortunately his foot caught on the top rung of the rope ladder and instead of climbing down, he tipped over headfirst, and ended up dangling from the ladder by his feet, swinging over the asteroid.

“Ahhhhhhhhh!” he yelled as he untangled himself and landed in a heap.

The stranger reached down, grabbed Comet by the
scruff of the neck and hauled him to his feet.

Comet’s hat was wedged down over his head and he wobbled around the asteroid as he struggled to get it off – much to the castaway’s amusement. With one last mighty heave the hat flew off and Comet fell on his backside. The captain sat there blinking his one good eye in befuddlement. The stranger stared with a wry smile at the three-eyed pirate.

“There you go, Patches! Right way up again,” said the stranger.

“Ah, erm, thank you,” Comet replied, looking a bit flustered. He took a deep breath and puffed out his chest. “I’m Captain Com—”

“Be a good fellow,” the stranger interrupted, “and grab those bags for me, will you? Getting up the ship’s ladder is going to be a struggle with this.”

He motioned to his golden peg leg, then gave Comet a wink and a pat on the cheek. “Make way, boys!” the stranger called up to the
Apollo
. “I’m coming aboard!”

A Solitary Journey by Tony Shillitoe
Finding Sky by Joss Stirling
From a Safe Distance by Bishop, Julia
The King’s Concubine: A Novel of Alice Perrers by Anne O’Brien
Bewitching the Knight: (A Medieval Time Travel Romance) by Diane Darcy
HIM by Brittney Cohen-Schlesinger
Fall into Forever (Fall into Him Book Three) by Harper, Evelyn
Merrick: Harlequins MC by Olivia Stephens
The Wishing Season by Denise Hunter
Wolf Among Sheep: A Paranormal Werewolf Romance (Roadside Angels Motorcycle Club Book 1) by Thomas, Kathryn