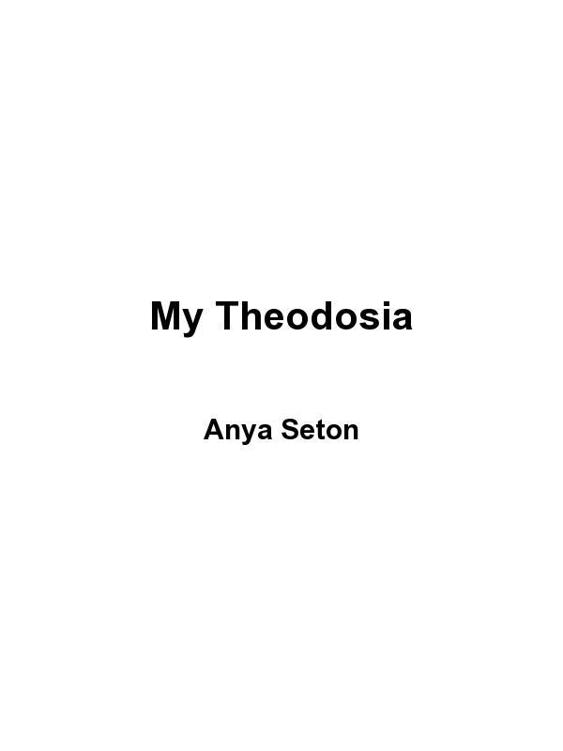 PRINTED IN THE U.S.A.

...I am indebted to you, my dearest Theodosia, for a very great portion of the happiness which I have enjoyed in this life. You have completely satisfied all that my heart and affections had hoped or even wished. With a little more perseverance, determination, and industry, you will obtain all that my ambition or vanity had fondly imagined. Let your son have occasion to be proud that he had a mother. Adieu. Adieu.

(Written on the eve of the duel with Alexander Hamilton.)

...I witness your extraordinary fortitude with new wonder at every new misfortune ... you appear to mt to superior, so elevated above all other men, I contemplate you with such a strange mixture of humility, admiration, reverence, love, and pride, that very little superstition would be necessary to make me worship you as a superior being.... My vanity would be greater if I had not been placed so near you; and yet, my pride is our relationship. I had rather not live than not be the daughter of such a man.

W
HILE
this story is a fictional interpretation of Theodosia's life, I have tried to be historically accurate in every detail. I have consulted all the Burr biographies, many contemporary newspapers, and have read unpublished Burr letters in the New York and Congressional Libraries, as well as a few which are privately owned.

The
Memoirs of Aaron Burr, with Miscellaneous Selections from His Correspondence
, by Matthew L. Davis, contains the fullest collection of the published letters and has furnished the backbone of my plot, with the exception of the Meriwether Lewis romance for which there are three separate sources.

There is a vast amount of Burr material, so vast and so conflicting that Aaron's character may be interpreted in a dozen different ways. I have chosen the one which seems to me to be truthful and have tried not to distort facts for the purposes of fiction; nor is such distortion necessary—the facts are romantic enough for any purpose.

There are nearly as many theories about Theodosia's fate as there are biographies of Aaron, which is saying a great deal. The most popular theory is the one which has her vessel captured by pirates and Theodosia walking the plank in long trailing robes; there is the theory of the wreck at Nag's Head, of the flight to France or Mexico, and others even more melodramatic.

I have presented the solution to the mystery which I believe to be accurate. It is based on Aaron's own conviction and is considered the most probable by the present Alston family.

I am indebted to many kind and helpful people, especially those in Charleston, Georgetown, and on the Waccamaw Neck, and I particularly wish to thank Mr. Arthur Geiger, of New York City, who has made an exhaustive study of Theodosia and has been very generous to me in suggesting material.

A
T SIX
o'clock on the morning of Midsummer Day, 1800, Aaron Burr's estate, Richmond Hill, was already well into the day's bustle of preparation for the gala dinner to be given that evening in honor of Theodosia's birthday.

The great kitchens hummed under Peggy's irritable guidance; from the dairy came the rhythmic clop-clop of the butter chums, mingled with more distant sounds of stamps and whinnies from the stables.

The newborn sun shimmered through heat haze upon the mansion's white columns and wrought-iron balustrades. It shone dazzlingly on the Hudson, whose slow-moving waters flowed but a few yards away below the house. Already the river was flecked white with sails, as sloops, schooners, and packets tacked upstream toward Albany with the incoming tide.

Half a mile from the house, in Greenwich Village, a neg
lected cow lowed for her belated milking. The sound carried to the white bedroom at Richmond Hill, where Theodosia Burr, daughter to Aaron, awoke at last on this morning of her seventeenth birthday to find her room filled with a pungent perfume. She sniffed with sleepy pleasure, and lay quiet on her big bed considering this phenomenon. The gardens were too far away to carry such a decided scent, and anyway there was no breeze stirring.

It smells like roses, she thought, still held in a voluptuous drowsiness. The damask curtains which enclosed her bed were partly looped back, a concession to the warmth of June; so that, without moving, she could watch the brightly blue rectangle of sky through the window beside her.

Sunshine glistened on the linen sheet and touched her braids with red fire. It was of a peculiar color, that hair: now dark brown, now chestnut, yet always enriched by an underlying tinge of auburn.

'Your hair is the color of port wine, Theo,' John Vanderlyn had once told her as he worked on one of the countless sketches of her that her father commissioned. She had thought this very funny then, partly because at thirteen all compliments are amusing—if one could call it a compliment—and partly because his heavy Dutch manner and intonation seemed so incongruous. Since then Vanderlyn had spent four years studying in France, and now he was back, having justified her father's faith in him by becoming an accomplished artist.

'Gilbert Stuart is all very well, if you like that swashbuckling style of portraiture,' Aaron had once remarked, 'but to my mind Vanderlyn will develop the greater gift'. And so, with one of his characteristic lavish gestures, he had sent the young wagon-painter abroad.

John Vanderlyn had acquired more arts than that of brush-wielding, Theo thought with detached amusement. Last
week, she and her father had gone down to the wharves on South Street to welcome him home. As he disembarked from the stout brig which had battled head winds for eight stormy weeks from Le Havre, she had not at first recognized him. Such a beau he had become!—in his plum-colored silk coat, elaborately frilled neckcloth, and jet shoe buckles, and his lanky flaxen hair, that used to be so unkempt, now neatly confined in a beribboned queue.

Vanderlyn had kissed her hand with all the grace of a French courtier, of Talleyrand himself, murmuring: 'Ah, glorious Théo! Mais vous êtes vraiment éblouissante! More beautiful than any of the lovely ladies I have seen in France'—with just that blend of boldness and gallantry which signalized a man of the world. But there had been genuine startled admiration, too, in his Dutch-blue eyes.

Her father had laughed complacently. 'My little Miss Prissy has turned into a reigning belle, hasn't she? I trust it won't addle her giddy head, or all my theories for bringing up females may go for naught.'

Theo had looked up at her father to meet his half-serious, half-teasing gaze. She had made a saucy face at him, and the anxious shadow faded from his darkly brilliant eyes. They understood each other well. Aaron's love and pride sustained her like a great warm river: all-pervading, irresistible. Her being floated on it joyously. And if sometimes the stream turned cold and turbulent, if sometimes his constant concern for her welfare or her intellectual progress seemed harsh or irksome, she simply flogged herself to greater effort. It was unthinkable, monstrous, that she should ever disappoint him.

Her father had been pleased with her lately. She now stretched luxuriously against the frilled pillows, flinging her arms above her head. The hundred lines of Plautus which she had memorized last week had delighted him no less than
her spirited interpretation of one of Gabriel-Marie's minuets on the new pianoforte.

'Well done, my dear,' he had said, with the gentle smile he reserved for her alone. 'Enjoy your morning ride with good conscience.'

And she had enjoyed it, she thought with a guilty start, for it was on that day that she had met the strange young man near the Belvidere Tavern on the East River.

Pleasing thoughts of the strange young man and her prospective rendezvous with him this morning were cut short by the white-and-gold enameled clock on her mantelpiece. It pinged seven times, and Theo jumped. So late! Even on a birthday morning would her father forgive the wasted hour and a half? There was her journal to be written up for his critical survey and fifty lines of Virgil to be construed.

She slid from bed onto the waxed oaken floor, gratefully cool to her tiny feet. She flung her nightcap on the bed, and, turning, saw the source of the mysterious fragrance.

A large reed basket stood knee-high on the floor beside her. It brimmed with French roses, golden yellow as cowslip butter around their gilded hearts, and from them rose a perfume warmly sensuous, heavy with the seductive breath of their native Provence.

Theo buried her face in them with a pleased cry. She did not need the accompanying note to tell her who had stolen into her room as she slept and left them there, but the sight of the small familiar writing delighted her.

Happy birthday to my Theo. Lazy slug-a-bed, the most precious hours of the day arc wasting. But, this once, I forbear to waken you, nor will I scold you today. If you searched, you might find in the basket a token of my esteem.

Your very affectionate father
A. B
URR

The note was characteristic of Aaron, with its blend of love, admonition, and small mystery.

Theo searched eagerly among the forest of thorny green stems. Never had her father failed to provide her with a superb birthday surprise. Her probing fingers found it at last—a silver box cunningly fastened to one of the roses. When she opened it, her breath caught.

An exquisite necklace sparkled up at her from black velvet. It was fashioned of diamonds and topazes, intricately set into gold filigree so as to form a cluster of jeweled rosebuds.

Her hands trembled as she held it to the light. 'Dearest Papa!' she whispered. Yellow and white, her favorite colors, and roses, her favorite flower, combined into flashing beauty.

The necklace was magnificent, far finer than anything she had seen of Lady Kitty Duer's or Mrs. Hamilton's. Aaron must have commissioned John Vanderlyn to bring it with him from France. The New York goldsmiths were not nearly skilled enough for this. And how like him to make a pretty ceremony of its presentation! He had the gift of dramatizing life for those around him. He was so generous—so extravagantly generous at times.

Theo sighed, cuddling the necklace against her cheek. Lately creditors had been even more pressing than usual, but this never seemed to worry her father. When he was here at Richmond Hill he handled them all nonchalantly, promising, placating, and occasionally paying strategic sums on account. But during his frequent absences in Albany, Theo had tried to struggle with the complicated household expenditures herself. It took thousands of dollars to nan the estate, with its famous wine cellar, stables, gardeas, and staff of twenty servants, both white and black. True, Peggy, Alexis, and Tom were slaves, but the others had to be paid their eight dollars a month somehow.