Odin Blew Up My TV! 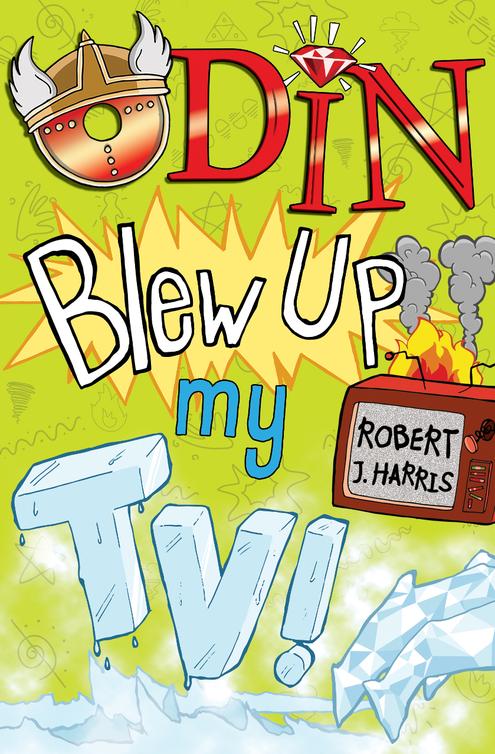 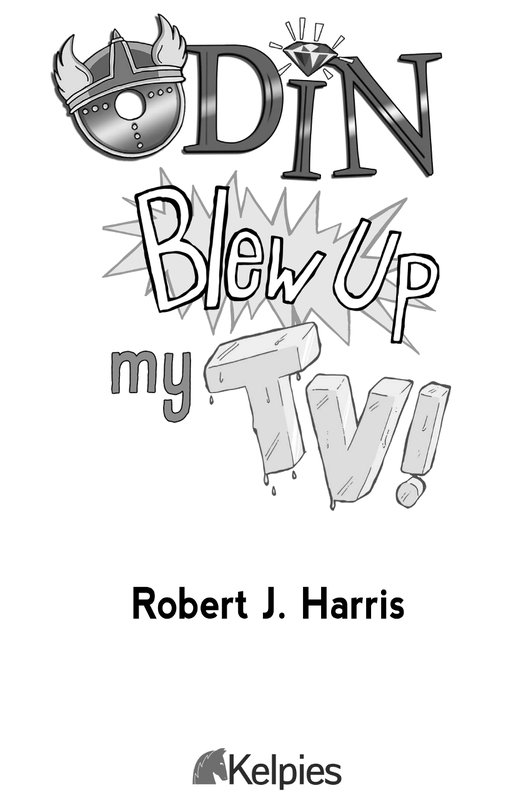 To my mum and dad,
for all the adventures they let me have.

As the 95A bus pulled out of St Andrews bus station on its way to Dundee, teenagers Greg McBride and Susie Spinetti were having an argument.

“Sorry, Greg,” said Susie, handing back his iPod, “I just can’t get into this stuff. What did you say his name was again? Rod Kestrel?”

“
Rawkestra
,” Greg corrected her sharply. “They’re only the most awesome metal band on the planet, and their album
Running from the Jaguar
is a total beast.”

“It’s a total something,” Susie agreed. “Have you not got any good bands, like Black and White Rainbow or Arguments with the satnav?”

“Oh right, like I’d listen to that rubbish.” Greg bit a chunk off his chocolate bar like that put an end to the conversation.

“You know, if we could find music we both enjoyed,” Susie sighed, “it would be good for our relationship.”

“Relationship!” Greg nearly choked on his chocolate. “Spinny, we do not have a relationship. We’re pals, okay?”

Susie shrugged. “If you say so, Greg.”

There were over a dozen passengers on the bus and Greg and Susie were seated near the back, on their way to the Olympia swimming pool in Dundee. As the bus moved down City Road, Greg stifled a yawn and flicked through the tracks on his iPod. He finally selected ‘Red Fire on a Blue, Blue Night’, which had an epic solo by the band’s Hungarian bassist Giorgio Pips.

“You’ve been yawning ever since we got on the bus,” said Susie. “Good thing we’re going for a splash in the pool. That’ll wake you up.”

“Could you not have let me sleep a bit longer before you came banging on the door at the crack of dawn?” Greg complained.

“Half past nine isn’t the crack of dawn,” Susie pointed out. “I’ve been up since seven.”

“I’m goofing around with you,” Susie laughed, giving him a playful thump on the shoulder. “Where are you getting all these big words from anyway? Did you have dictionary-on-toast for breakfast?”

Greg pulled a second-hand paperback out of his pocket. “I’m getting them from this.”

“You, a book?” said Susie sceptically. “Has it got a lot of pictures in it?”

Susie took the book and read the cover. “
THE VERBAL NINJA: How to Make People Do What You Want by Using the Right Words.”

“It will help me in my future careers,” said Greg. “I’ve decided it’s time to start thinking about my future.”

“And what careers would those be?” Susie asked, flipping through the pages. “Zookeeper? Gameshow host?”

Greg counted off on his fingers in what he thought was a businesslike manner. “First fighter pilot, then advertising executive, then,” he concluded grandly, “president.”

“President?” said Susie. “This is Scotland. We don’t have a president.”

“Does Lewis know you’re reading a book?” asked Susie. “I’m surprised it’s not in all the papers.”

Greg’s younger brother Lewis was very serious-minded and rarely had his nose out of a book.

“He wouldn’t notice if I’d taken up fire-eating,” Greg scoffed. “For weeks he’s been daft on fish. He’s bought himself a pair of goldfish and today he’s off to the harbour to catch a piranha.”

“He’s not going to catch a piranha in St Andrews,” Susie chuckled.

“Well, he’s off to catch something,” said Greg. “I wasn’t really listening.”

Susie returned the book and Greg stuffed it back in his pocket.

“So are you going to use your new Jedi mind powers to make me do what you want?” she asked impishly.

“There’s an easier way to do that,” said Greg. He pulled out a chocolate and raisin cereal bar and passed it to her.

“Hey, cool!” said Susie, stripping off the wrapper and taking a big bite. “Thanks!” she said through a mouthful of chocolate and raisins.

Greg wriggled down in his seat and closed his eyes. “Now pipe down and let me sleep.”

It was a bright October day and the morning sun flashed off the wide windows of the university science buildings to their left. Off to the right, beyond the playing fields and the golf course, the waters of St Andrews Bay lapped against the West Sands.

The bus was just passing the entrance to Baldrovie Farm when there was a sudden lurch as the driver slammed on the brakes.

“Oh great!” Greg groused as he was jolted forward. “Can’t a guy get any peace?” He kept his eyes firmly closed and squirmed back into a comfortable sleeping position.

Susie stood up and peered ahead through the driver’s windscreen. “Greg, you need to see this,” she gasped.

“It’s not a sheep in the road again, is it?” said Greg, reluctantly opening his eyes.

There was a buzz among the passengers and they were all peering out the windows.

“Here, have you taken a wrong turn?” one woman demanded of the driver.

“Aye, it looks like we’re in the middle of Tentsmuir Forest,” said another.

“We’ve not gone that far,” said Susie. “If you look back you can still see the Old Course Hotel.”

“That lassie’s right,” somebody agreed. “What on earth is going on?”

Greg could see what the fuss was about. They were only a short distance out of town and the Dundee road should have been stretching in front of them. Instead a line of tall, dark trees was spread right across the road. In fact, a dense, wild-looking forest sprawled as far as the eye could see, all the way down to the coast.

A few other cars pulled up behind the bus. Faced with the obstacle ahead, the drivers, one by one, turned around and headed back to town.

“I’ll bet it’s got something to do with they GM crops,” an old man declared darkly.

“Come on, Spinny, we need to get a look at this,” said Greg.

“You’re right,” Susie agreed as they made their way down the aisle to the front of the bus.

The driver was on his radio trying to contact the bus station, and getting only static in reply. “Back in your seats, please,” he said when he saw them coming.

“We need to get outside,” said Greg.

“Out?” echoed the driver. “No, you don’t. There’s something right queer going on and I’m taking no chances. We’re headed straight back to the station.”

“Look, Susie here swears she saw her granny out there wandering through the trees,” Greg explained, placing a sympathetic hand on Susie’s shoulder.

“Her granny?” The driver frowned. “What would her granny be doing out there in the trees?”

“Grannies are always getting lost in the woods,” said Greg, sounding like an expert on the subject of lost grannies. “Did you never hear about Red Riding Hood’s granny?”

Susie gave the driver a wide-eyed look, like a worried kitten. “Please, mister. My granny’s not well. I’m scared something’ll happen to her if we don’t fetch her inside.”

“Okay,” said the driver unhappily, twisting the lever to open the door. “Mind you’re only a minute, though, then we’re heading back.”

Greg and Susie hopped down and walked towards the tree line.

“Red Riding Hood’s granny didn’t get lost in the
woods,” said Susie. “She got eaten by a wolf.”

“Fine, you’re such an expert, you go back and tell him that,” said Greg, jerking a thumb back at the bus.

They halted a short distance from the forest and stared. The trees were as high as a five-storey building with leaves of such a dark green they looked almost black. Now and again they glimpsed a shadowy form slipping through the mysterious woodland and they could hear rustles, snorts and crackles.

“This is totally… I don’t know… it’s totally
something
,” said Greg.

“I’ll bet there’s a word for it in that book of yours,” said Susie. “Do you think it’s got anything to do with… you know… Loki?”

“It’s his style alright,” said Greg. He shook his head. “You’d think he’d be fed up of messing about with St Andrews by now.”

Once before, Loki, the Viking god of magic and mischief, had turned St Andrews into a mad fantasy world of ogres and goblins. Then another time he buried the town under a torrent of snow right in the middle of summer.

“But did Odin not say he tossed him into some dark hole way beyond the edge of time and space?” said Susie, recalling how their last adventure with the Norse gods had ended.

“It did sound pretty foolproof,” Greg agreed, rubbing a hand through his unruly thatch of brown hair.
“I suppose there could be something else going on.”

“Maybe it’s aliens who want to use the Earth to supply them with timber,” Susie suggested. “They might have developed a strain of fast-growing trees.”

They both stared at the rings they were wearing. Forged from Asgardian gold and marked with a bolt of lightning, Odin had given the rings to Greg, Susie and Greg’s younger brother Lewis, to thank them for their help defeating Loki. Now the rings were vibrating and a tingling sensation ran down their fingers and right up their arms.

All of a sudden it stopped.

As Greg and Susie stared at each other in surprise, the driver’s voice sounded out behind them, “Come on, you kids! Get back on board!”

“What’s his hurry?” Greg grumbled. “It’s not like it’s a long way back to the bus station.”

An immense animal was emerging from the dark shadow of the trees. She could see it was covered in thick, black bristles and its small, hostile eyes glared at them down the length of two vicious tusks.

“It’s some kind of pig,” said Greg, taking a step back, “except three times the size.”

“More like a wild boar,” said Susie. “And I think it’s looking for a fight.”

With a wicked gleam in its piggy eyes the boar advanced on them. When Susie and Greg backed off it scraped the tarmac with its front trotters and let out an angry squeal. It was about to charge when the bus driver sounded a loud blast on his horn that stopped it in its tracks.

“Back to the bus, Spinny!” Greg urged.

He grabbed Susie by the shoulder to turn her around and they both pelted full speed for the bus. They heard an angry snort and a clatter of hooves as the boar lumbered after them.

The doors opened with a hiss and they leapt inside. As the doors closed behind them, the boar scored a huge gash in the bus’ paintwork with one of its tusks, prompting cries of alarm from the passengers.

“I hope your granny’s not really out there,” the driver said as Susie and Greg flopped into the seat behind him.

“If she was, she’d turn that thing into a pile of bacon rolls,” said Susie. “She used to work on a farm.”

Muttering some nasty words under his breath, the driver threw the bus into reverse. The boar wheeled around and charged, this time colliding head-on with the radiator grille and bouncing back.

“Clear off, you mad beast!” the driver yelled. He had one eye on the boar and another on the rear-view mirror as he continued to reverse at top speed.

The animal stopped and glowered at the bus as it reversed up a small farm road then turned back towards St Andrews. After the vehicle roared off, the boar let out a squeal of triumph, clearly deciding it had won this fight by a knockout.

Everybody on the bus chattered excitedly, totally baffled as to what was going on.

“If Loki’s surrounded the town with that dark forest…” said Susie.