The Janus Affair: A Ministry of Peculiar Occurrences Novel 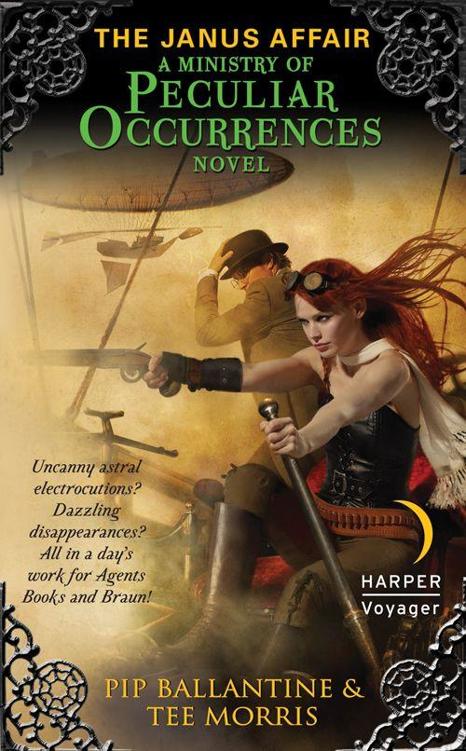 A Ministry of Peculiar Occurrences Novel

To our parents, Roger & Pamela and Wayne & Nancy, who never expected their kids to travel back in time by airship and save the Empire but understand that sometimes it is required.

Wherein the Perils of Train Travel Are Made Plain

I
t was the smell—the smell of metal baking under a summer sun—that alerted Lena to the terrible fact that her getaway had been a failure.

The sharp, hot odour burned her nostrils, reawakening the blind panic she had pushed back earlier in the evening. Now it wrapped invisible, chilling tendrils around her throat again. Unconsciously, she touched her face with one gloved hand, wincing as her skin flared under even this lightest of contact. Still, if a light sunburn was the worst she’d got away with, then she would not complain—not with what she had witnessed.

Lena had nearly been lulled to sleep with the repetitive rattling of the train, being wedged between its window and a rather rotund woman with a hatbox perched on her lap. Even after what she had seen back in Edinburgh, she dared to take some reassurance once the hypersteam had reached full speed. Her next stop would be London. She would rush home to Adelaide, hold her close, and then together they would pack up Lily and head out from the city. Having a plan, even as threadbare as hers, added to her sense of security, like that of a babe in a mother’s arms.

That was before the scent tickled Lena’s nose, sending her blood into a heady rush. Every primitive sense screamed at her,
Run. Run now!

Ignoring propriety and decorum, she shoved her way past the damnable woman—not even bothering to excuse her lack of manners as the lady’s ridiculous hatbox tumbled to the floor. Outraged complaints of her fellow passengers packed tight in this third-class car were reduced to distant clatter as she took long strides down its length. Manners and decorum held no consequence to her now. Had they known what she knew—witnessed for themselves what had happened to Maude Wilkinson—they would have understood. Undoubtedly, they would have joined her in a terrified flight.

She rested one hand on her stomach while her other clutched at her skirts, lifting them slightly. Her stride grew longer, then faster. Against the momentum of the train she felt that sinking illusion that she was only running in place. Beneath her corset, her heart raced as fast as the random thoughts flashing in her mind. Why didn’t she wear trousers this morning? They would have been so much more efficient when running for one’s life.

What of Adelaide, waiting at home? What would her love think if she didn’t come back? Would she believe Lena had abandoned her and their sweet Lily?

The desire to live, to escape, choked her throat, so huge that it seemed impossible. Yet Lena had seen so many impossible things today. So many. Too many.

She stumbled to the third-class door, and the rush of winter’s chill cleared her mind as well as stirred the passengers unfortunate enough to be in the seats closest to the junction between cars. The bitter cold lingered against her exposed skin when she slipped into second-class. Another two carriages remained ahead, and then came the private compartments of first-class. One more car, after this one. She concentrated on that as she strode forward. She dared not look back. If she did, she knew the abomination would be there, on her heels. The last thing she would see. The other end of her present car grew closer but on catching a whiff of hot brass in her nostrils, her mind flashed again and again on what horror she had witnessed in Scotland.

Much as in third, the second-class passengers closest to the door grumbled and barked at Lena as she continued into the junction. Now in the tiny gangway between cars, the wind biting at her skin, an idea came to mind. To her
educated
mind.

Madness. Nothing, other than madness.

“Madness,” she heard herself whisper even as she slipped out of her overskirt and tossed it into the darkness, even as her fingers released the catch on the iron gate, even when her hand gripped the metal rung of the ladder. There was no reason to say it again as her heels locked into the rungs under her, nor when she began to pull herself upwards. Then Lena cleared the top rung and any civilised thought she might have entertained disappeared as the wind struck her hard and relentlessly. At their present speed of seventy miles per hour across Her Majesty’s countryside, the January chill ripped though her clothes, through her chemise; and against her skin Lena felt invisible needles tear into her.

She needed to disappear, if only for a moment. Yes, this was madness, but also her only chance.

Lena was thankful, still. At least it wasn’t snowing.

The phenomenal speed of the hypersteam train was tearing at her eyes, yet she dare not spare a hand to wipe them clean. Her gloves, satin creations that were far too respectable for her current exploits, grasped the roof’s edge, her fingers searching for any purchase. Lena suddenly felt warmth, only to feel the cold for fleeting moments, then warmth once again. Is this what that peculiar extension running along the rooftops of passenger cars was all about? She tried to imagine the train car before her. What else would be up here for her to grab on to? A small chimney? Yes. Somewhere along her progress, somewhere in the near-darkness, she would see it. Would she catch its scent first?

A scream drowned out the locomotive’s rhythmic
chuff-chuff-chuff
and caused her grip to tighten. Something was happening to the air around her, and in moments each breath caused her to gag and retch. A stale, earthy taste continued to fill her mouth. What was happening?

My God, we are in a tunnel!

Her jacket could not filter out all of the foul soot from the engine’s main stack; but using its sleeve as a mask, she could at least take small, shallow breaths. Those breaths, though, threatened to choke her. How long was this tunnel? Could she manage to make it to its end? What of the abomination? Was it also following her, or had she evaded it with this daring, if not foolhardy, escape? Hardly a victory if she were to suffocate due to the soot and ash—

Another terrifying scream and then the deafening howl returned to her ears. She drew in the hard, cold air, and found a peculiar solace in its chill, its taste, and its freshness.

Lena also took comfort in not catching any trace of the sharp, deadly odour that had driven her to this precipice. Maybe she had outwitted her assailant, unlike poor, slow Maude.

The world opened up around her, and Lena felt her heart leap into her throat. A hunter’s moon now emerged from behind a curtain of dark clouds, its ivory light reflecting in the water far below. One slip and she would either meet a quick death on the bridge or fall into the abyss of the gorge they now crossed. In this brief second, the train hurtling relentlessly on, humming underneath her like a beast, Lena considered jumping into the night, into the great expanse around her, but that
educated
mind—the same one that told her to escape via the carriage’s rooftop—conjured images of Adelaide and Lily.

No,
she insisted.
I have to live. For them.

Then Lena saw in the moonlight a tiny smoke pipe, demarcating the end of the car. With her right hand daring to crack the edge of the vent she held, her left reached out. Through the ruined gloves, she brushed the ladder’s top rung. She looked up, and the gracious lunar companion that had restored her hope was now disappearing into darkness again. Lena fixed her eyes on the ladder. So close. She threw both hands towards it, and watched the fixed iron disappear into the night as the cloud bank high above her devoured the moon. Her world tilted, slow and languid, and then a stillness wrapped around her like a blanket.

Lena pressed her temple and cheek against the ladder; and with a grunt, she pulled herself off the second-class car’s roof. The stinging in her skin, the cold, and the exhaustion all abated. The train rocked Lena back and forth as she descended, as if trying to shake her free of it, but still she managed to drop safely onto the gangway.

Lena looked through the finely decorated glass of the car. No sign of the abomination. Now what? Back the way she came? Forward, gambling that it had continued that way to the engine?

She kicked open the door of the car behind her, her eyes raking over its passengers who had no clue that mere moments ago she was above them, lost in a Bedlam outside their comfortable, cosy, shared compartment. Lena knew she must have looked terrifying: soot-stained, wearing finery torn by the elements and rooftop décor. Amidst the looks of revulsion, she saw a face looking at her with something different—recognition.

It was the colonial. The sister that she’d been introduced to more than a year ago. She’d taken tea with her only the day before—even though it felt an age past. Lena smiled, relief flooding through her whole body. Finally, Fate had dealt her a decent hand in the form of an unexpected ally. She would tell this sister from the South about Maude and then everything would be all right.

Lena took a step, her mouth opening to call out her name, and then the warmth wrapped around her. She only had time to gasp out, “Eliza, help me!” before lightning flashed, her eyes awash with a blinding brilliance while her skin tingled, her breath catching in her throat.

And then they had her.

The Book of Christmas Virtues by Jack Canfield
A Forever Kind of Love by Shiloh Walker
Actions Speak Louder by Lewis, Rika
Cavanaugh Rules by Marie Ferrarella
Castle of the Heart by Speer, Flora
Forbidden Indulgences by Terry Towers
Loving the White Liar by Kate Stewart
Intaglio: The Snake and the Coins by Danika Stone
A Christmas Home by April Zyon
Lord Iverbrook's Heir by Carola Dunn