Read The Strain, the Fall, the Night Eternal Online

The Strain, the Fall, the Night Eternal 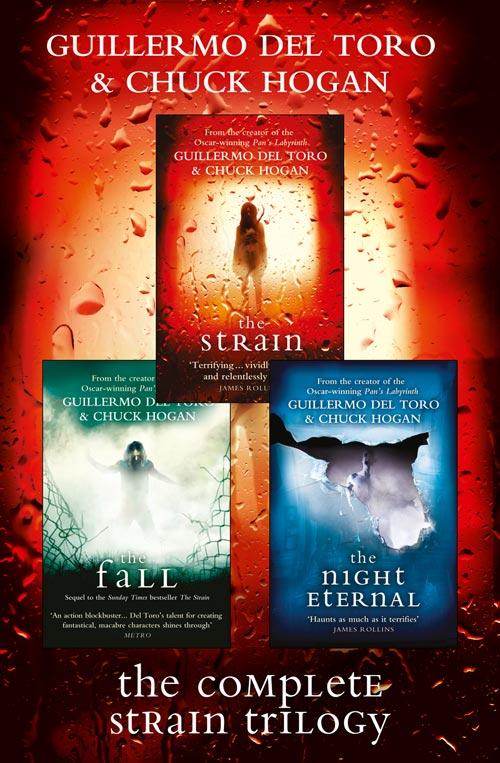 The Strain, the Fall, the Night Eternal

High-concept thrillers with a supernatural edge from world-famous director, whose films include Pan's Labyrinth and Hellboy.

THE STRAIN: A plane lands at JFK and mysteriously 'goes dark', stopping in the middle of the runway for no apparent reason, all lights off, all doors sealed. The pilots cannot be raised.

When the hatch above the wing finally clicks open, it soon becomes clear that everyone on board is dead -- although there is no sign of any trauma or struggle. Ephraim Goodweather and his team from the Center for Disease Control must work quickly to establish the cause of this strange occurrence before panic spreads.

THE FALL: Humans have been displaced at the top of the food chain, and now understand -- to their outright horror -- what it is to be not the consumer, but the consumed.

Ephraim Goodweather, director of the New York office of the Centers for Disease control, is one of the few humans who...

Also by the Authors 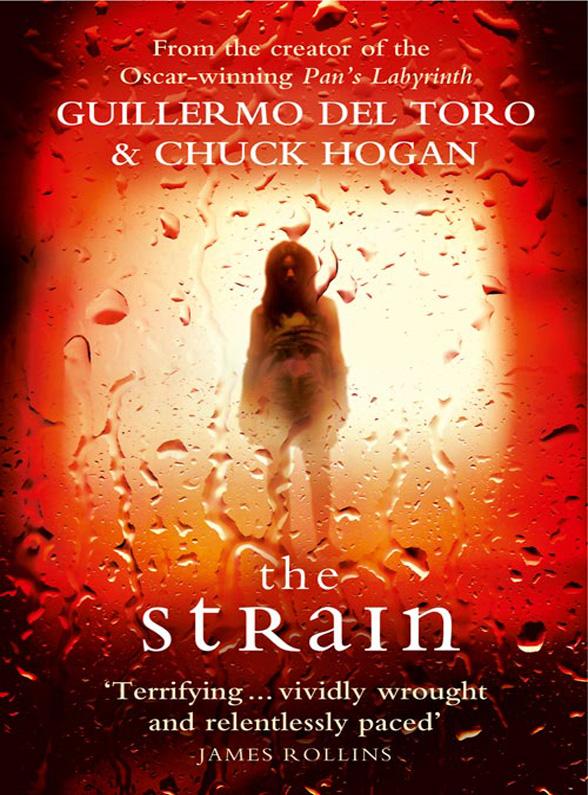 BOOK I
OF
The Strain Trilogy

To Lorenza, Mariana, and Marisa …

to all the monsters in my nursery:

May you never leave me alone

The Legend of Jusef Sardu

The Legend of Jusef Sardu

“O
nce upon a time,” said Abraham Setrakian’s grandmother, “there was a giant.”

Young Abraham’s eyes brightened, and immediately the cabbage borscht in the wooden bowl got tastier, or at least less garlicky. He was a pale boy, underweight and sickly. His grandmother, intent on fattening him, sat across from him while he ate his soup, entertaining him by spinning a yarn.

A
bubbeh meiseh
, a “grandmother’s story.” A fairy tale. A legend.

“He was the son of a Polish nobleman. And his name was Jusef Sardu. Master Sardu stood taller than any other man. Taller than any roof in the village. He had to bow deeply to enter any door. But his great height, it was a burden. A disease of birth, not a blessing. The young man suffered. His muscles lacked the strength to support his long, heavy bones. At times it was a struggle for him just to walk. He used a cane, a tall stick—taller than you—with a silver handle carved into the shape of a wolf’s head, which was the family crest.”

“This was his lot in life, and it taught him humility, which is a rare thing indeed for a nobleman to possess. He had so much compassion—for the poor, for the hardworking, for the sick. He was especially dear to the children of the village, and his great, deep pockets—the size of
turnip sacks—bulged with trinkets and sweets. He had not much of a childhood himself, matching his father’s height at the age of eight, and surpassing him by a head at age nine. His frailty and his great size were a secret source of shame to his father. But Master Sardu truly was a gentle giant, and much beloved by his people. It was said of him that Master Sardu looked down on everyone, yet looked down on no one.”

She nodded at him, reminding him to take another spoonful. He chewed a boiled red beet, known as a “baby heart” because of its color, its shape, its capillary-like strings. “Yes, Bubbeh?”

“He was also a lover of nature, and had no interest in the brutality of the hunt—but, as a nobleman and a man of rank, at the age of fifteen his father and his uncles prevailed upon him to accompany them on a six-week expedition to Romania.”

“To the north country,
kaddishel
. The dark forests. The Sardu men, they did not come to hunt wild pig or bear or elk. They came to hunt wolf, the family symbol, the arms of the house of Sardu. They were hunting a hunting animal. Sardu family lore said that eating wolf meat gave Sardu men courage and strength, and the young master’s father believed that this might cure his son’s weak muscles.”

“Their trek was long and arduous, as well as violently opposed by the weather, and Jusef struggled mightily. He had never before traveled anywhere outside his family’s village, and the looks he received from strangers along the journey shamed him. When they arrived in the dark forest, the woodlands felt alive around him. Packs of animals roamed the woods at night, almost like refugees displaced from their shelters, their dens, nests, and lairs. So many animals that the hunters were unable to sleep at night in their camp. Some wanted to leave, but the elder Sardu’s obsession came before all else. They could hear the wolves, crying in the night, and he wanted one badly for his son, his only son, whose gigantism was a pox upon the Sardu line. He wanted to cleanse the house of Sardu of this curse, to marry off his son, and produce many healthy heirs.

“And so it was that his father, off tracking a wolf, was the first to become separated from the others, just before nightfall on the second evening. The rest waited for him all night, and spread out to search for
him after sunrise. And so it was that one of Jusef’s cousins failed to return that evening. And so on, you see.”

“Until the only one left was Jusef, the boy giant. That next day he set out, and in an area previously searched, discovered the body of his father, and of all his cousins and uncles, laid out at the entrance to an underground cave. Their skulls had been crushed with great force, but their bodies remained uneaten—killed by a beast of tremendous strength, yet not out of hunger or fear. For what reason, he could not guess—though he did feel himself being watched, perhaps even studied, by some being lurking within that dark cave.

“Master Sardu carried each body away from the cave and buried them deep. Of course, this exertion severely weakened him, taking most of his strength. He was spent, he was
farmutshet
. And yet, alone and scared and exhausted, he returned to the cave that night, to face what evil revealed itself after dark, to avenge his forebears or die trying. This is known from a diary he kept, discovered in the woods many years later. This was his last entry.”

Abraham’s mouth hung empty and open. “But what happened, Bubbeh?”

“No one truly knows. Back at home, when six weeks stretched to eight, and ten, with no word, the entire hunting party was feared lost. A search party was formed and found nothing. Then, in the eleventh week, one night a carriage with curtained windows arrived at the Sardu estate. It was the young master. He secluded himself inside the castle, inside a wing of empty bedrooms, and was rarely, if ever, seen again. At that time, only rumors followed him back, about what had happened in the Romanian forest. A few who did claim to see Sardu—if indeed any of these accounts could be believed—insisted that he had been cured of his infirmities. Some even whispered that he had returned possessed of great strength, matching his superhuman size. Yet so deep was Sardu’s mourning for his father and his uncles and cousins, that he was never again seen about during work hours, and discharged most of his servants. There was movement about the castle at night—hearth fires could be seen glowing in windows—but over time, the Sardu estate fell into disrepair.

“But at night … some claimed to hear the giant walking about the
village. Children, especially, passed the tale of hearing the
pick-pick-pick
of his walking stick, which Sardu no longer relied upon but used to call them out of their night beds for trinkets and treats. Disbelievers were directed to holes in the soil, some outside bedroom windows, little poke marks as from his wolf-handled stick.”

The Ugly Sister by Jane Fallon
The Black Isle by Sandi Tan
Christmas in the Trenches by Alan Wakefield
Cows by Matthew Stokoe
Kiss of Midnight by Lara Adrian
Duskfall by Christopher B. Husberg
Road to Thunder Hill by Connie Barnes Rose
Harsens Island by T. K. Madrid
Kingdom of the Grail by Judith Tarr
Sweet Spot by Blaise, Rae Lynn