The Sunshine Dame of Doom 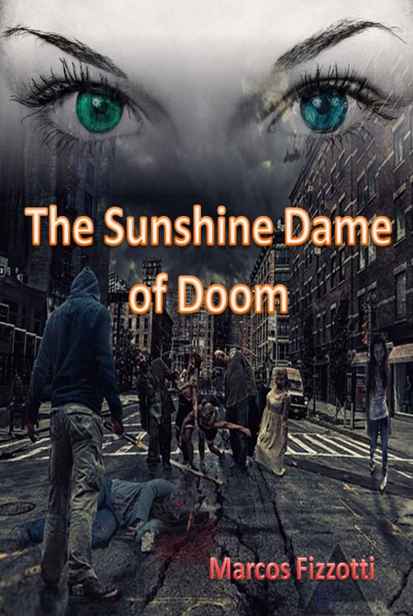 Title:
The Sunshine Dame of Doom

Names, characters, businesses, places, events and incidents are either the products of the author’s imagination or used in a fictitious manner. Any resemblance to actual persons, living, dead, or living dead, or actual events is purely coincidental.

It is forbidden to distribute or copy any part of this book without the written authorization of the author.

We shall not be held accountable if you turn into a zombie upon finishing this book.

“And it’s a real bad time to be around these parts.”

“Trust me, mate. I got reasons to believe it’s the same everywhere.”

“Yep, with this epidemic and all, it seems the world as we know is coming to an end.”

“And we never knew it that well.”

“Speak for yourself, young lady. As you can see, I’ve lived enough.”

“What do you mean? There’s no such thing.”

“Just take a good look outside! Do you think life is worth living now, that this crap world is worth fighting for?”

“Well, it was kind of crappy before, but people fought for it just the same.”

“Yes, by coming in here and drinking themselves to death.”

“But that’s a good thing to you. Your business bloomed before and you still got a lot of customers now, at least those who are not eating each other. That’s a good reason for living.”

“Wisdom from the young ones! What’s going to be, miss?”

“It sounds appealing. Let me see… Bring me lemonade, and not the kind that makes my gums bleed.”

“I’m afraid I’m out of lemons right now, but I got some good old moonshine. It’s the next best thing.”

Some strange distant noises roared outside the bar. The bartender kept staring at his customer across the counter.

“Somebody may think you like me, lad.” The woman said uncomfortably.

“I saw you before somewhere else.”

“Yes, ten minutes ago, when I entered your bar.”

“It’s possible. I got a common face.”

The bartender did not take his eyes off her. She shifted position on the stool.

“You’re that girl!” He finally jumped.

“Right gender, only the pronoun is wrong. I’m just
a
girl. Make it with an article.”

“Oh no! You are that girl from the news! Papers, internet, YouTube, this pretty face of yours was everywhere not so long ago!”

“You’re mistaking me for Justin Bieber! Can I have that moonshine now?”

“And to you, it’s on the house!” He grabbed the bottle, opened it, filled a glass and slid it toward her.”

“This is really not necessary, sir.”

“Come on, why are you so embarrassed about? On the contrary, you should be proud. Such an amazing stunt you pulled! An elementary basic school in the busy hour is attacked, invaded and surrounded on all sides by those horrendous sick dead people that have been eating everybody lately. Teachers and lots of little children are cornered and scared. Local police is stunned and bewildered, they try to invade the school and shoot the monsters down, but nothing seems to work, they just keep on coming. Eventually, the cops run out of ammo and are the first to die. The ones outside call for help, but all other units are busy with similar problems. Those dammed deranged human beasts are everywhere. So, that’s it for the school. Nothing anybody can do anymore. Outside the isolation cord around the building, hundreds of parents cry in despair for their sons and daughters, poor innocent souls about to face the most horrible death.”

He drank a little from the glass meant to his customer and continued.

“But then, this woman comes. Somehow, she breaks into the cordoned off zone and into the school. And ten minutes later, oh yeah, ten minutes was all she took, teachers run out of the cursed school, followed by hundreds of children, all safe and sound, back to the warm and loving arms of their moms and dads, who cry in relief, thanking heavens for that incredible miracle.”

“Look mister, if this is a movie you’ve just told me, it’s a very corny and unoriginal one.”

“Oh yes, it would be if it was a movie. But it’s not, it’s real, it really happened. And that woman, the children’s savior, is you!”

“Hoy!” She scoffed. “No offense, my good man, but you’ve been taking some samples of this poison you sell every day. You’re making a terrible mistake.”

“No, I’m not. I never forget a face, especially not this face. When you left the school, carrying a little girl who couldn’t walk, the last one you saved, an army of reporters took your picture and sent it everywhere. What was left of the police force went into the school to assess situation, but all they could find was the dead monsters you left behind, all with cracked or sliced in half, or even missing heads, because that’s the only way to stop them, right, by busting their heads off?”

“I think you would. The press even gave you a nickname,
Apocalily
, because one reporter found out that your name is Lily.”

“Sorry to disappoint you, mate. I don’t know what you’re talking about.”

“Okay. Then tell me your name. And make it with a passport.”

“I assure you I’m over twenty-one.”

“Not the point and you know what I mean. There’s surely no harm in telling me your name and proving your identity.”

“Why don’t you tell me your name?”

She finally had a chance to drink the moonshine.

“You’re a loudmouth for a bartender.”

“People pay me for that too, honey.”

The distant noises from the outside all of a sudden exploded in a loud uproar on the inside.

Horridly deformed rotting skeletons broke into the bar, dilacerating three costumers by a booth close to the door, while others ate the guts of a couple sharing a table next to a shattered glass window.

Screams of pain and fear blended with frightful snarls of crazy hungry beasts.

“JESUS!!!” The bartender screamed, leaning against the counter to reach for a shotgun.

The customers who survived the first strike ran scared to the center of the bar, in a desperate attempt to dodge the horde of zombies.

“Good thing you’re prepared for this contingency.” The woman commented. Then she drank all the content of her glass in a single gulp.

The man was a reasonably good shot and blew two zombies’ heads off.

“Do you have a pool table somewhere in this place?”

“Listen missy, this is definitely not a good time for a game!”

“Not a game. We can use the cues and balls as a weapon against these bastards!”

Actually, the man was down behind the counter way before she finished that sentence.

All other living souls inside the bar jumped the counter as well, screaming and trying to hide from the impious zombies. Panic-stricken people also ran to the restrooms, but the living dead had already made their way into such area through some backdoors. The place was totally overrun.

The horde of beasts also closed on the woman. She reached for a hockey stick in a sheath strapped to her back and started to assemble it. But some parts got jammed at some point, delaying her actions. The zombies were slow, but steady, almost reaching her head, with dirty twisted teeth ready for the slaughter.

“Why do they make these things modular?” She complained to herself.

She finished mounting the stick. The first row of zombies was upon her, ready to take a bite.

The bartender and most customers were ducking and lying behind the counter, men and women with tearful eyes and dread in their souls, hands covering faces and ears, weeping and praying for their lives.

Loud noises of glasses shattering and wood breaking took the whole place by storm. Nobody knew what was going on. Some of them were too scared even to move. But five minutes later, everything quieted down all of a sudden.

Bartender and customers still waited awhile before having the nerves to stick their heads over the counter. When they finally did it, what they saw was utterly unbelievable. The zombies were scattered all over the floor, some with heads split in half, others even without any head.

But the important thing was they were all motionless, now rendered completely harmless, forming a rotten pool of organs stretching everywhere.

And in the middle of the gore stood the woman, her hands firmly gripping the hockey stick covered in slimy tar, still in a state of readiness, in case some zombie decided to move.

Very quick, she became the center of attention. Her eyes met the bartender’s. Like the others, he was gazing at her with open mouth and chin nearly touching his chest.

“It still doesn’t prove I’m that girl from the news!” She complained.

Burned by J.A. Cipriano
Maxwell's Point by M.J. Trow
Easy Pickings by Ce Murphy, Faith Hunter
Banishing Shadows by Lorna Jean Roberts
The Clue in the Diary by Carolyn G. Keene
In Persuasion Nation by George Saunders
Night Magic by Karen Robards
Valley of Bones by Michael Gruber
That's a Promise by Klahr, Victoria
One of Us by Tawni O'Dell