The Thief of Broken Toys 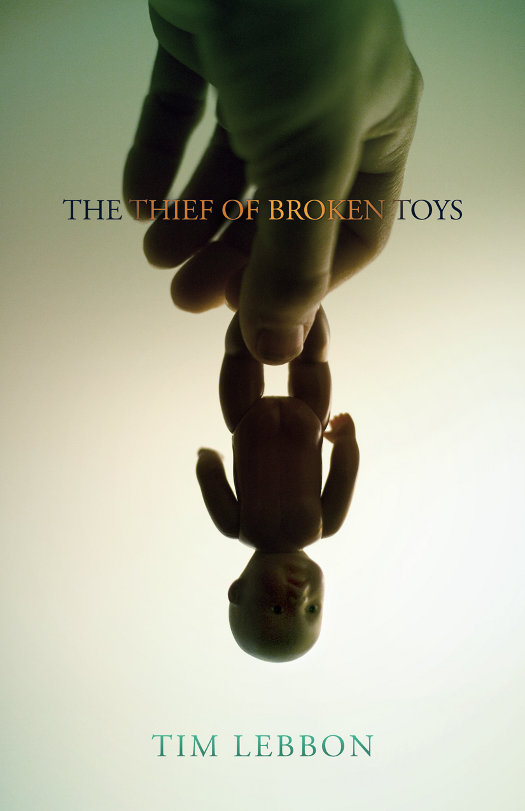 This book is a work of fiction. Names, characters, places, and incidents are either a product of the author's imagination or are used fictitiously. Any resemblance to actual events, locales, or persons, living or dead, is entirely coincidental.

All rights reserved under all applicable International Copyright Conventions. By payment of the required fees, you have been granted the non-exclusive, non-transferable right to access and read the text of this e-book on-screen.

No part of this text may be reproduced, transmitted, down-loaded, decompiled, reverse engineered, or stored in or introduced into any information storage and retrieval system, in any form or by any means, whether electronic or mechanical, now known or hereinafter invented, without the express written permission of the publisher.

No part of this book may be used or reproduced in any manner whatsoever without the prior written permission of the publisher, except in the case of brief quotations embodied in reviews.

We acknowledge the support of the Canada Council for the Arts, which last year invested $20.1 million in writing and publishing throughout Canada.

Published with the generous assistance of the Ontario Arts Council.

A bright, cold autumn day, and the village is
living. People ebb and flow through its streets
like a pulse, moving from here to there with
familiar regularity. Some are tourists, but
they're fewer in number now that the ice cream
shops are closed and most of the self-catering
cottages are wrapped up warm for the winter.
Today has the feel of every familiar day.
Down by the harbour we see a man stacking
crates of just-landed fish onto a pallet, ready
for the driver of a small forklift to transport
into the big freezer behind the market. Soon,
restaurant
owners
and
shopkeepers
will
start milling and the fish will be brought
out, displayed in their coffins of broken ice
for inspection and purchase. Moving closer,
drifting down on the low autumn sunbeams,
we see the man more clearly.

He's tall, middle-aged, fit and strong, and
wearing skin leathered by years of exposure
to the elements. There's a small scar across
his left cheek, which he remembers putting
there when he was barely into his teens â a
clumsily cast fishing line, the hook spinning
as it flicked by his face. He recalls the cool
feeling of open skin, the surprise as he saw
sunlight splashed red before his face, and
then the tears of pain. It hurt at the time, but
the scar has stood him in good stead over the
years. It gives him character â even though
he has more than enough character for one
man â and more than one woman has ended
up in his bed because of an interest in that
scar. It draws the eye, dashed at a rakish angle
across his cheek. And above it, his piercing
blue eyes. His name is Jason, and he used to
be your friend until he started sleeping with
your wife.

You've never seen them together, not yet.
Their affair is a whisper in the village, oft-repeated like the hush of the incoming tide on
the small pebble beach. Jason feels sorry for
you, and as he stacks three more crates, you
cross his mind. He stands up and kneads the
small of his back. It's been a long seven hours
out at sea, and he's glad to be in for the day.
He'll be going out again that evening, but in
between will be sleep, a pint or two at the Old
Anchor, and perhaps an hour with Elizabeth
that afternoon. She loves him in the shower,
swilling the salty tang from his skin while she
coaxes more from him.

He stares across the harbour at the dozens
of houses clinging to the steep hillside. Your
house is up there, the one near the top with
the small terraced garden and the shed leaning
drunkenly against the rocky outcrop. He
remembers looking up there before and seeing
movement in the garden, the unmistakeable
flitter of an excited child playing on his own.
He knew even back then who the child was,
of course, because he was the boy's godfather.
But the child is gone now, and the garden is
still. He shields his eyes to see whether you
are sitting in the garden, staring down at him
staring up. Perhaps you are, but it's too far to
see. From this distance you'd simply fade into
the background.

Leaving Jason, we rise up and revel in the
sea breeze once again, like a seagull patrolling
its familiar hunting ground. Jason continues
stacking crates, and sometimes he thinks he'll
soon be too old to carry on fishing the dawn.
He has vague plans about opening a bed-and-breakfast somewhere inland, perhaps up on
the moors where hikers hike all year round.
He'll suggest it to your wife one day soon,
and perhaps sometime â years from now,
when Toby has been gone long enough for his
shadow to disappear from the village â she
will accept.

Following the stream inland, passing over
the old slate roofs where seagulls roost, we
spy the silvery snake of the stream passing
beneath arched stone bridges and between
buildings so tall and old they seem to lean
in and touch. It looks serene and picturesque
now, that stream, but in its bed it holds the
silt of tragedy. Thirty years since the flood,
but still it's talked about in Skentipple when
the pubs are closing and old men and women
are shadows in the narrow streets. Eight
people washed away, and their names are
immortalized in metal in the small village
square. You never knew any of them â you
were a child, and you lived a hundred miles
away â but their names are still familiar to
you.

We pass above the village's main car park,
beyond which only people who live or work
here are allowed to drive. The streets were
never made for cars, and some of the sharper
corners are carved with the memories of a
thousand wing mirrors and bumpers. The car
park is half empty today. Wendy sits on her
usual bench, her old rucksack propped beside
her and a plastic cider bottle already half
empty between her knees. Her house is one of
the finest in Skentipple, and also one of the
largest, marking the entrance to the village
from the main coastal road, but she has been
like this ever since you can remember. She
always dresses well and seems to take care of
herself, but she won't let anyone close enough
to tell for sure. No one can recall the last time
anyone touched Wendy. She leaves money on
shop counters and rarely waits for change, and
this corner of the car park is her own.

Today, as every day, she's thinking about
her husband Rodney and how he went away a
decade before. And that is why there's no room
in her life for anyone else, because she's doing
her best to make Rodney still there. Her house
echoes strangely at night, and every evening
before bed she enters his study where she last
saw him alive, and he is almost there again.

She looks up, as if she sees. But her
expression does not change. She is long used
to shadows in her life.

The road winds up from the car park, and
on either side the valley slopes grow shallower.
Most of the houses here are private, with a
few holiday cottages scattered amongst them.
We drift lower because there's something in
the street, and we pass above a discarded toy
propped in the gutter. It looks like a beanie
doll, its brightly painted face faded a little
by sunlight or rain, right leg missing. Such a
shame.

We flit along with the wind, and then fall
gently as a feather toward the Smugglers' Inn.
It's an old pub built into the side of the valley,
and Tony Fox the landlord once took you
down into the basement to show you the start
of the tunnel that leads all the way down to
the sea. An old river course, he said, and you
can remember the way the shadows shifted in
there as his candle was kissed by a breeze, the
rich smell of seaweed and rot even half a mile
from the sea, and the sense of history stirring
the old air. Untouched by sunlight, that place
had little inkling that the world had moved
on.

You asked Fox if he'd been all the way
down, and he looked at you strangely, as if it
was a stupid question. You still don't know.

Elizabeth is sitting in the small front beer
garden smoking a cigarette. She has taken up
smoking again since Toby died, having given
up years before when you started trying for
a baby. You still remember her smile as she
smoked her final cigarette and threw it away
half-smoked.
Never again
, she said.
This is the
first day of the future
.

Now, every day is the last day of the past.
Elizabeth is sad today, and she is always sad.
You cannot know this, but you always assume
it to be true. And you assume because you
cannot bear the idea of her being happier than
you. It was not her fault, and not yours either,
but grief is a harsh mistress, and sometimes
blame is the only way to appease her.

Your estranged wife enjoys this cigarette
because it takes her back to a time of longing
and hope. She doesn't think it's because it
erases those smokeless years when everything
was so happy â she's not certain that's the
reason â but she allows herself to consider it.
Don't avoid thinking about him
, the doctor told
her, and she has become adept at believing
she's thinking about Toby without really
considering him at all. Mostly she thinks about
herself, as she was then. She closes her eyes
and inhales again, and the smoke burns away
the sweet smells of Skentipple. Maybe later she
will see Jason, and his soft touch and restrained
concern will further change her. Because that's
what she is trying to do, and she can't help but
acknowledge it. Change herself back to how she
was before she met you, and before . . .

Six Months in Montana (Montana Sweet Western Romance Series, Book 1) by Pamela M. Kelley
The Man with Two Left Feet by P. G. Wodehouse
The Ghosts of Broken Blades by Unknown
The Ties That Bind by Warren Adler
Always With You Part Two by Leighton, M.
It's a Green Thing by Melody Carlson
If Love Were Enough by Quill, Suzanne
Fool for Love by Beth Ciotta
All I Want Series Boxset, Books 1-3: All I Want for Christmas, All I Want for Valentine's, All I Want for Spring by Clare Lydon
1 Catered to Death by Marlo Hollinger