Read The Translation of the Bones Online

The Translation of the Bones 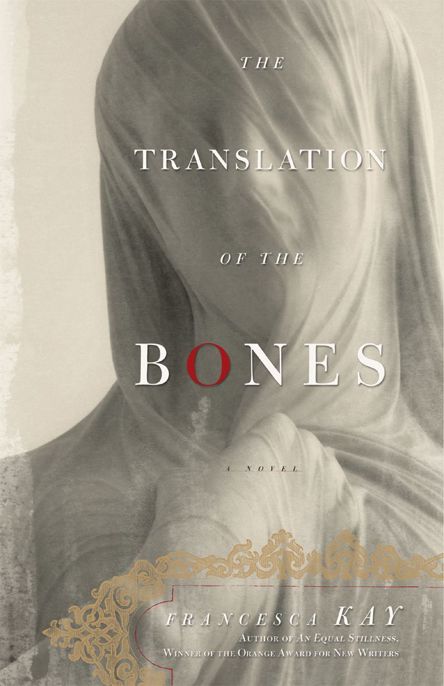 “[A] skillfully constructed and beautifully written book, which is as much concerned with common humanity as it is with individual faith.”

“If Francesca Kay’s second novel were a piece of music, it would be a requiem, finding the poetry, perhaps even the glory, in loss and despair. Which is not to say that her novel is depressing or gloomy—far from it. In its depiction of a community grappling with the pain of what it means to be human, it is a novel which manages to be both poignant and uplifting. . . . You don’t have to be religious to be moved by Kay’s elegantly calibrated writing.”

I
N THIS RIVETING STORY OF RELIGIOUS PASSION GONE TRAGICALLY WRONG
, F
RANCESCA
K
AY, WINNER OF THE
2009 O
RANGE
A
WARD FOR
N
EW
W
RITERS, OFFERS A PROFOUND MEDITATION ON THE NATURE OF FAITH, COMMUNITY AND MOTHERHOOD
. W
RITTEN IN CRYSTALLINE PROSE
,
T
HE
T
RANSLATION OF THE BONES
UNLOCKS SECRETS ABOUT OUR CAPACITY TO BELIEVE AND TO LOVE.

When word gets out that Mary-Margaret O’Reilly, a somewhat slow-witted but harmless young woman, may have been witness to a miracle, religious mania descends on the Church of the Sacred Heart in Battersea, London. The consequences are devastating, not only for Mary-Margaret but for others, including Father Diamond, the parish priest, who is in the midst of his own lonely crisis of faith, and Stella Morrison, adrift in a loveless marriage and aching for her ten-year-old son, away at boarding school. Another mother, Alice Armitage, counts the days until her soldier son comes home from Afghanistan, while Mary-Margaret’s mother, Fidelma, imprisoned in her tower block, stares out over the city through her window for hour after hour with nothing but her thoughts for company. It is Mary-Margaret’s desperate attempt to prove that Jesus loves her that will change all of these lives in a shocking way.

An exquisite novel about how people connect (or fail to) and what they believe in,
The Translation of the Bones
is slyly funny, utterly haunting and nothing short of unforgettable.

FRANCESCA KAY
’s first novel,
An Equal Stillness,
won the Orange Award for New Writers in 2009. She lives in Oxford with her family.

MEET THE AUTHORS, WATCH VIDEOS AND MORE AT

· THE SOURCE FOR READING GROUPS ·

Thank you for purchasing this Scribner eBook.

Sign up for our newsletter and receive special offers, access to bonus content, and info on the latest new releases and other great eBooks from Scribner and Simon & Schuster. 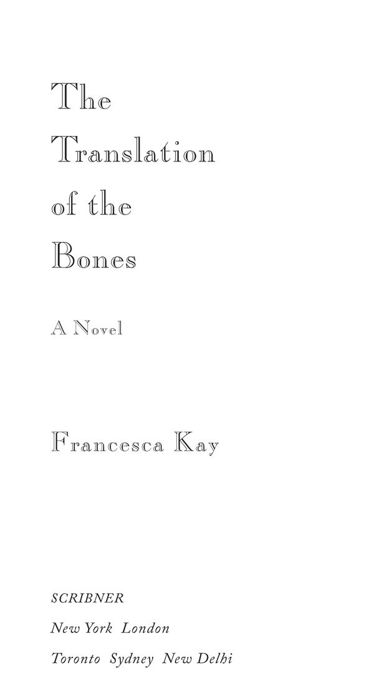 Originally published in Great Britain in 2011 by Weidenfeld & Nicolson, an imprint of The Orion Publishing Group Ltd.

All rights reserved, including the right to reproduce this book or portions thereof in any form whatsoever. For information, address Scribner Subsidiary Rights Department, 1230 Avenue of the Americas, New York, NY 10020.

SCRIBNER
and design are registered trademarks of The Gale Group, Inc., used under license by Simon & Schuster, Inc., the publisher of this work.

To Teresa, and in memory of Bernard

The Translation of the Bones

I
t’s beyond belief what you find between the pews, Mrs. Armitage was saying. Coins and gloves you might expect, but socks and underwear? Hair clips, buttons, handkerchiefs, and now look at these, these peculiar white pills. She held out her hand to Father Diamond, who looked at it carefully and shook his head. Mrs. Armitage brushed the pills into the plastic rubbish sack beside her and went on: d’you know, the other day there was an old chap in here who was looking for his teeth? I said to him, I said I think you need a dentist not a church. But no, he swore he’d left them here and we had to have a good look round . . .

Excuse me, Father Diamond said. Behind him the sacristy door opened and Stella Morrison came out, her arms full of dying flowers. She stepped into a band of sunshine that streamed through the high windows of the south wall and for a moment she was wrapped in gold. Father Diamond turned and looked at her, the sunlight woven through her hair and spilling on the sheaf of fading roses and gloriosa lilies that she carried. She genuflected briefly in the direction of the altar and said: look, the last flowers we were allowed and now they’re dead. She went on down
the aisle to the main door. Excuse me, he said again to Mrs. Armitage, I can hear the minutes of the council meeting calling, I’d better love you and leave you, I’m afraid. Oh but, she said, but Father, I did want to have a word with you about the candle grease on that new surplice, and she put her hand firmly on the sleeve of his soutane.

Mary-Margaret O’Reilly watched Father Diamond’s disappearing back less wistfully than usual as he followed Mrs. Armitage into the sacristy. She had been waiting for this moment, for this quiet, empty church. Now was the perfect chance. Mrs. Armitage had finished with her sweeping and her polishing; the great mop she used, stiff and black with floor wax, was back in the cupboard in the porch. If Mary-Margaret could get the job done now, and quickly, she’d have things shipshape before Father D put up the purple shrouds. She’d hate to think he’d see the dirt that she had noticed when she was gouging candle wax out of the pricket stands.

The problem was she could not find the ladder. She had thought there was one in the cupboard. But a chair would have to do instead. She took one from the back of the church and carried it through to the Chapel of the Holy Souls. There, with a silent prayer of apology for offense unwittingly caused, she stepped out of her shoes, climbed on the chair and from it onto the altar. She would change the white cloth later. Now she was face-to-face with Him, their eyes were level.

It had been difficult to choose the right materials for the task. Flash was far too harsh and so was Mr. Muscle. Fairy liquid, maybe? No, she felt this called for something special and, having rejected Boots as ordinary, she decided on
the Body Shop at the top of the King’s Road. The mingled scents she found there befuddled her a little, and she wasn’t sure what to say to the powdery lady who bore down on her with an offer of help and a sample of glow enhancer. But she stood her ground and found the shelves of brightly colored bottles arrayed under the heading
BODY CARE
.

Ondine by Ebony McKenna
Six Minutes To Freedom by Gilstrap, John, Muse, Kurt
The Convert's Song by Sebastian Rotella
Life Drawing by Robin Black
Private Relations by Nancy Warren
One for My Baby (Phoenix Noir Book 4) by Graham, Barry
Nate by Delores Fossen
The Judas Goat by Robert B. Parker
The Jewel of St Petersburg by Kate Furnivall
What A Gentleman Wants by Linden, Caroline