Read The Vengeance of the Tau Online

The Vengeance of the Tau 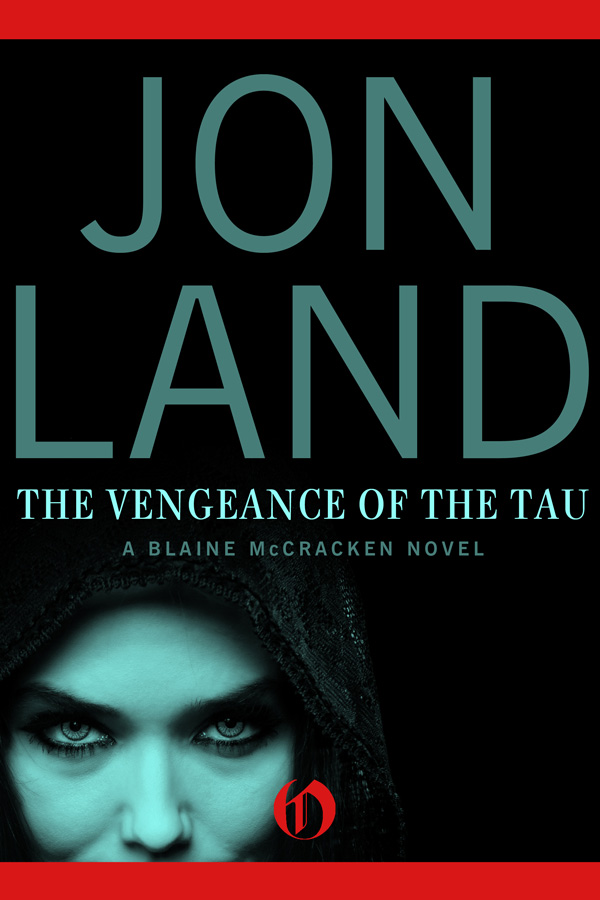 The Vengeance of the Tau
A Blaine McCracken Novel

For Derringer and Ruby—
my true collaborators

Part One: The Dig

A Biography of Jon Land

A Sneak Peek at
Strong at the Break

THEY RUMBLED THROUGH
the school gates in trucks the same gray color as the sky. A
Kübelwagen
led the motorcade, its passenger standing up on the floorboard and gripping the windshield frame for support. His black uniform was darkened by the storm that had soaked it. A jagged scar ran the length of the left side of his face beneath the cheekbone.

“Abgesessen und sich in einer Reihe aufstellen!”
he ordered after stepping down into the muck.

Instantly troops in heavy wool uniforms poured from the back of the three trucks. Their rifles leveled before them, most swept across the schoolyard to cut off any possible escape. The rest came to attention two yards behind the man in the black uniform.

“What is the meaning of this?”

The speaker was a priest, who strode defiantly across the yard past the guards who had taken up their positions. He stopped a rifle’s distance away from the dark figure, the rain pounding both of them.

“Are you the one in charge?” the German demanded.

A thin smile bent the scar running the length of the German’s face. “Not anymore. I am Colonel Erich Stimmel of the Gestapo, priest—”

“—and you will hand over to me the Jews you are harboring.”

Father Desmarais held his ground. “I am afraid you have made a mistake.”

Stimmel circled him, beads of water running off the slope of his black cap. “Then you will not mind assembling all of your students and faculty in this yard to satisfy my curiosity.”

The priest seemed to notice the rain for the first time. “The cafeteria would do just as well.”

“Out here will do fine.”

“We have nothing to hide.”

Stimmel waved a hand at the troops behind him. “My men will make sure of that.”

The assembly began forming seconds later. The first of the boys emerged tentatively, prodded by the soldiers who had burst into their classrooms. After a few further moments of confusion, the school personnel and student body poured from the building in a flood rivaling that of the water tumbling down from above. Teachers struggled to organize their young charges in neat lines. Some of the boys wrapped their arms tightly around their shoulders. Most continued to shiver. The day was unforgiving. Stimmel made them wait there until the troops he had assigned to the building had completed their sweep.

“Now, priest,” he said to Father Desmarais loudly enough for all to hear, “you will give me what I have come for, and my men and I will be gone.”

“I cannot turn over what I do not have.”

“I give you one last chance to be reasonable.”

“You need not bother.”

“As you wish,” Stimmel said more softly, in a voice colder than the rain.

He spun rigidly on his heels and strode to the center of the drenched, shivering group of boys. Silence followed his steps, the only sound that of the rain beating against the muddied ground.

“The following three boys will step forward without delay,” the colonel announced suddenly, his eyes back on Father Desmarais. “Edelstein, Sherman, and Grouche.”

The priest’s knees buckled slightly. The fear he had successfully suppressed swam freely in his eyes now.

“I have my sources, priest,” Stimmel told him, and then repeated, “Edelstein, Sherman, and Grouche.”

Before him the boys remained frozen in place.

Stimmel moved back to the front of the assembly and paced along the front row. “I give you one last chance to make this easy on yourselves. Edelstein, Sherman, and Grouche, come forward.”

“Very well,” Stimmel said, and pulled a quartered set of papers from his inside pocket. “Because you have chosen to be difficult, I must do the same. I am going to read the names of three other boys from the master list. These three will come forward and be shot.”

“Stop!” Desmarais protested. He started toward Stimmel and was restrained by a soldier at either arm.

Stimmel had just gotten his pages unfolded when a boy advanced from the middle of the pack. His shoes sloshed through the mud and kicked it up against the lower part of his school trousers. His brown, curly hair was matted to his skull. Wisps of it stuck to his forehead. His face was blank and pale. He had barely advanced ahead of the front row when two other boys slid forward, flanking the first on either side. All three were shivering horribly. Masks of confused shock coated their faces.

“Edelstein, Sherman and Grouche.” Stimmel nodded. “Regrettable that this priest put you and myself in such a difficult position.” He turned to the troopers behind him. “Place them against the front wall. No blindfolds. Let the rest be given a warning.”

“No!” Father Desmarais screamed, trying to pull free of the men holding him. “You can’t! There’s no
reason
!”

“A lesson must be taught the others, priest. You defied me. Punishment for that must be dispensed.”

“I plan to,” Stimmel assured him. “But not before you watch.”

The three boys had been backed up against the stone wall. One was sobbing desperately now. A second had sunk to his knees. The third stood transfixed, disbelieving.

Six troopers standing thirty feet before the boys raised their rifles into the ready position.

The troopers aimed their rifles.

The bullets thumped out in staccato bursts, like minor claps of thunder. The boys’ bodies jolted backward. Two keeled over. A third slumped down the wall still facing forward. Legs and hands twitched. Eyes were locked open and sightless. The storm swept the blood away.

Those who had borne witness sobbed in shock. A few fainted and were left there in the mud. The ones who tried to turn away were twisted harshly back around by the troopers patrolling the rows.

Father Desmarais crossed himself. “This is the devil’s doing,” he spat at Stimmel.

“No, priest, it is your doing.” Stimmel swung to face the population of the school. “This is the final lesson you will ever receive here. Let it be one you remember always.” He turned back toward Desmarais. “This school is being closed.”

The priest’s eyes never left Stimmel as he was led to a position just in front of the three dead Jewish boys. He stood rigid, face twisted in a hate that made his misting breath seem like steam.

Father Desmarais was trembling with rage. “You will pay for this.”

Desmarais turned his gaze to the sky. The rain pounded his eyes, and his palms opened upward as if to catch it. He looked to the ground and then straight at Stimmel. “In the name of justice, I place a curse on you. May the evil that begat you bring the pain that you have suffered on others upon you a hundred times over. May your life be snatched away as you have snatched it from these innocent boys today.” Desmarais cast his stare beyond Stimmel now, into the storm toward eternity. “I give up my soul to the power that can visit such a wrath on this man and others like him in the years to come. Take me in return!
Take me!
”

“I will,” Stimmel said, and he nodded toward the firing squad.

The rifles thundered again, and Father Desmarais stood upright for what seemed like a very long time before crumpling.

Erich Stimmel would recall that day fondly for years to come. It was never far from his mind, especially during sex, when to achieve pleasure he needed to conjure up memories of the atrocities he had been party to. The pain of others had come to mean ecstasy for him.

After the war he had escaped punishment at Nuremberg and slipped into a new identity, thanks to the organization known as ODESSA. He had become a gunsmith in Vienna and earned enough money to buy his prostitutes without having to tap into the accounts provided by those who had settled him here.

It was the winter of 1947, a week into the new year, and his memories of the boys and the priest were especially sharp.

“Stop,” the whore beneath him pleaded. “Please.”

“Shut up!” Stimmel shouted, and slammed deeper into her anus. The gunbelt he wore over his naked waist dug into her. His holster slapped against her flesh. The whore cowered beneath him, shivering, an animal and nothing more. Let it hurt,
make
it hurt. Yes …
Yes!

With one final thrust, it was over. Stimmel pulled out and left the whore to her whimpers.

“The bathroom,” she muttered.

“Use it, bitch,” Stimmel said, as he rolled onto his back and sank into the down-filled quilt covering part of the bed. “Then leave.”

It hurt to walk even that short distance, and the woman closed the door behind her, feeling for a lock and trembling anew when she saw none there. She sat on the toilet seat and held herself, not wanting to die, hoping he would let her leave. She suddenly felt sick and turned herself round to face the bowl. The vomit rushed up her throat and left her breathless and gasping. Dry heaves racked her repeatedly.

It was then that she heard the sound of a thump followed by the madman’s voice:

A gunshot sounded, and then another.

The prostitute sank to her knees. A horrible smell that made her retch anew filled her nostrils.

The drawn-out wail curdled her ears, fading to a rasp and then a wet gurgle. Something sloshed about in the room beyond. Soft thuds pounded the wall, and the woman held her breath against the chance that she might be discovered.

She remained motionless until all sounds in the adjoining room ceased. When she eased open the door, a wall of utter coldness slammed into her, a fierce dead chill pouring in from the bedroom accompanied by waves of the god-awful, nauseating stink. The woman emerged from the bathroom holding the doorframe tight and dropped to her knees at first sight of what lay before her.

He had been torn apart. Pieces of him lay strewn about beneath scarlet patterns embroidered upon the walls. His pistol lay on the bed, grasped in a severed hand. The prostitute leaned over and gagged, unable to breathe. She crawled across the floor through the grotesque remains, the stink and the cold all but unbearable.

She emerged into the street below naked and screaming, screaming of monsters loose in Vienna, screaming that no one was safe. The few people on the street gave her a wide berth as she ran past them. But none of them listened, and the woman rushed on through the night toward the false promise of morning.

An Ordinary Me by Brooklyn Taylor
Bad Debts by Peter Temple
Against the Wind by Kat Martin
Of Flame and Promise by Cecy Robson
Invisible City by Julia Dahl
Hot Holiday Houseguests by Dragon, Cheryl
The Glass Prince by Sandra Bard
Kieran (Tales of the Shareem) by Allyson James, Jennifer Ashley
The Bone Garden: A Novel by Tess Gerritsen
The Human-Undead War Trilogy (Book 1): Dark Intentions by Ondrashek, Jonathan Edwardk