Read Unraveled By The Rebel Online

Unraveled By The Rebel 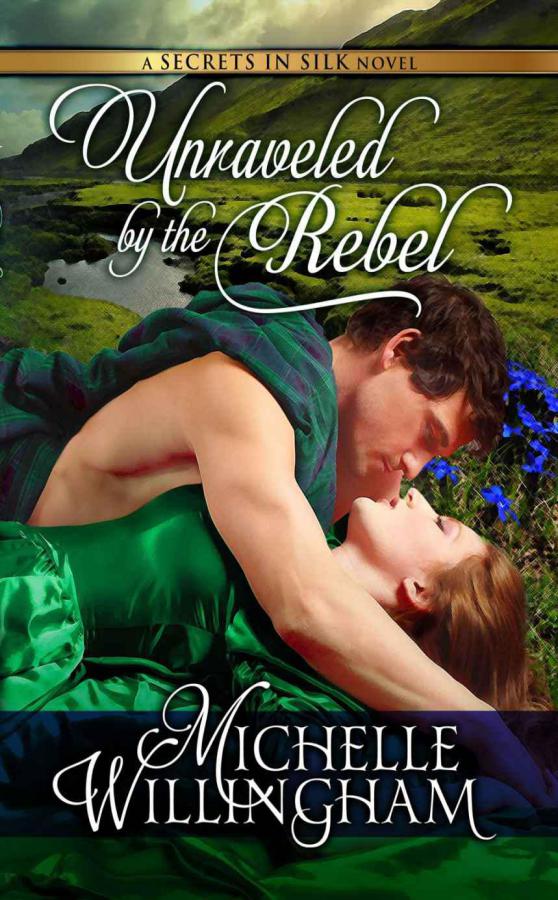 —4 stars,
RT Book Reviews
on
Undone by the Duke

“Using lots of emotion,
Seduced by Her Highland Warrior
is sure to touch your heart and soul with the tenderness and love that shines from the pages. Michelle Willingham has penned another winner.”

“Michelle Willingham writes characters that feel all too real to me. The tortured soul that is Kieran really pulled at my heartstrings. And Iseult’s unfailing search for her lost child made this book a truly emotional read.”

—
Publishers Weekly
on
Her Warrior Slave

“Willingham successfully draws readers into an emotional and atmospheric new tale of the Clan MacKinloch. Allowing a gentle heroine to tame a hero who has lost his ability to speak draws readers into the story and keeps them enthralled to the very end. Well-crafted, brimming with historical details and romantic from beginning to end, this is Willingham at her best.”

—4 stars,
RT Book Reviews
on
Tempted by the Highland Warrior

“Willingham neatly folds equal measures of danger and desire into her latest historical, and the snippets from Emily’s cookbook that open each chapter add an extra dash of culinary spice to her well-crafted romance.”

—
Booklist
on
The Accidental Countess

Undone by the Duke

“The Viking’s Forbidden Love-Slave” in the
Pleasurably Undone
anthology

“Voyage of an Irish Warrior”

Surrender to an Irish Warrior

“Pleasured by the Viking” in the
Delectably Undone
anthology

“Lionheart’s Bride” in the
Royal Weddings Through the Ages
anthology

Claimed by the Highland Warrior

Seduced by Her Highland Warrior

Tempted by the Highland Warrior

“Rescued by Her Highland Warrior” in the
Highlanders
anthology

To Sin with a Viking

For Frankie—the best brother a girl could have. Thanks for always being there for me and for being such an inspiration.

A
BOUT THE
A
UTHOR

“H
e killed him.” Paul Fraser’s voice was flat, holding a lifetime of pain in those three words. “The Sassenach bastard hanged my father.”

He looked half-wild with grief and anger, and Juliette Andrews’s heart broke for him. Never before had she seen Paul this upset. His cropped black hair was matted, his blue eyes shadowed, as if he hadn’t slept in days. Perhaps he hadn’t eaten, either.

All the air seemed to leave her lungs, and she demanded, “What do you mean, they hanged him? Why?”

“No’ here.” Paul took her palm as he guided her across the glen and toward the hillside. A small copse of pine trees would hide them from open view, and she followed him into the shadow of the woods. Juliette held on to her skirts, stepping carefully over fallen logs and past the underbrush. Though her family would be furious with her for stealing away alone with him, she didn’t care. In her eyes, there was no harm in it. Paul was seventeen, while she was only fourteen.

From the day she’d arrived in Scotland a few months ago, she’d been fascinated by the handsome Highlander. Paul had taken
her out exploring near the foothills of Ben Nevis, showing her the beauty of this wild land. It was a forbidden thrill to take his hand and climb high above the valley, with a boy who made her heartbeat quicken.

And now, her blood ran cold at the thought of something happening to him.

“I swear to you, I didna steal anything. I tried to stop Malcolm from taking a sheep.” The story came spilling out—of the raid gone bad and how Paul’s friend had defended himself with a blade, only to be shot afterward. “They died, Malcolm and Lord Strathland’s factor. I couldna save them, and I—I ran.”

His eyes glittered as he tried to hold back the turbulent emotions. “Strathland’s men followed me home, saying I’d murdered the factor. Da tried to talk to them, and they took him in my place.”

He fell silent for a time, and she knew what he was about to say next.

“They left his body on the noose,” he finished. “At Eiloch Hill, as an example to the others.” Paul swallowed hard, his eyes filled with fury. “He’s dead because of me.” His hand tightened into a fist, and before she could stop him, he rammed it into a tree.

When he punched the trunk a second time, he drew back bloody knuckles. He didn’t weep, as she would have done. The raw pain in his voice went deeper than any physical pain.

She wanted to say something. Anything to tell him how sorry she was. But words would mean nothing to him. Words wouldn’t bring his father back.

Juliette hardly realized she was crying for him until he was in her arms, holding her with a desperate need. Leaning up against the tree, she let him take comfort from the embrace, her tears dampening his cheeks.

This was what he needed from her now. His posture was stiff, his body so tense, he was nearly trembling with rage. And yet, he never let go, as if she were the single strand holding his life together.

“It’s not your fault,” she whispered, stroking the back of his head. Paul didn’t answer, but from his slumped shoulders, she could tell he didn’t believe her. The only sign that he’d heard was a tightening of his arms around her.

For long moments, they stood together, their bodies pressed close. Although they had spent countless hours together, this was the first time she’d sensed the ground of friendship shifting between them. Her skin grew more sensitive to him, his body hard and strong against her own softness.

It was wrong to let him hold her like this. He was a poor crofter’s son, and she, the daughter of an officer. Her parents expected her to wed a knight or a baronet one day. Perhaps even a peer, since her uncle was a baron. Although a quarrel between her father and his brother had brought them to this small estate in northwest Scotland, she hadn’t minded leaving her home in London. Here, she had a freedom she’d never known before.

Her heart was pounding as she closed her eyes, fighting against the unbidden response to his touch.

“I’m leaving Ballaloch,” Paul said at last. “My mother is sending me away to Edinburgh, to live with my uncle.”

The words sank into her like a blade, though she knew he had to go. They might have hanged Kenneth for the raid, but it was only a matter of time before they came after Paul. “It will be safer for you there.”

“My mother doesna wish to look upon my face anymore,” he said, his eyes staring off into the distance. “No’ after what I did.”

His words were laden with grief, and she squeezed his palm, wishing she knew what to say to him. “It will be all right.”

Juliette drew up to her knees, reaching to touch his face. “Your mother likely wants to protect you from the men who did this. You’re the only son she has left.”

“It should’ve been me swinging on those gallows.”

“Don’t say it.” She touched her forehead to his, and he covered her hands, bringing both her palms to his face. “I know you grieve for him.”

“I just… canna believe any of it happened. I keep thinking that I’ll wake up and he’ll be with us again.” His midnight-blue eyes grew shadowed, and he closed them as if to push back the grief. In the filtered light of the trees, the outside world slipped away until it was only Paul and her.

Almost Paradise (Sinners on Tour Book 8) by Olivia Cunning
Lethal Legacy by Louise Hendricksen
At the Heart of the Universe by Samuel Shem, Samuel Shem
Rembrandt's Ghost by Paul Christopher
Carnifex by Tom Kratman
The Night the White Deer Died by Gary Paulsen
Valley of the Kings by Cecelia Holland
A Voice from the Field by Neal Griffin
The Case of the Missing Bronte by Robert Barnard
The Black Hole by Alan Dean Foster