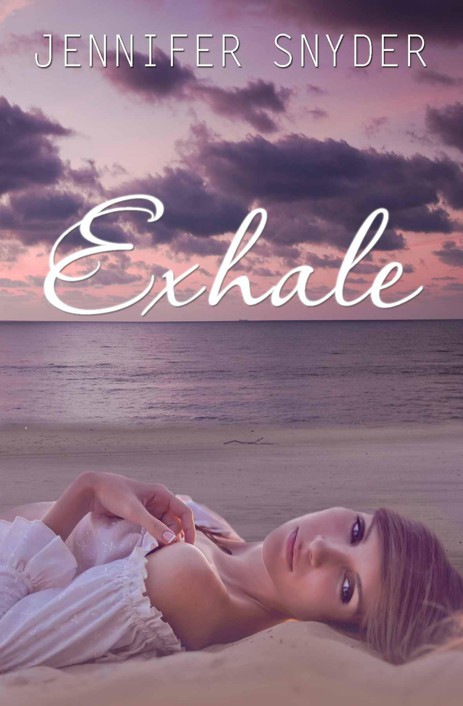 Cover Design by Once Upon a Time Covers

This novel is a work of fiction. Any resemblance to peoples either living or deceased is purely coincidental. Names, places, and characters are figments of the author’s imagination. The author holds all rights to this work. It is illegal to reproduce this novel without written expressed consent from the author herself.

All rights reserved. No part of this e-book may be reproduced in any form other than that in which it was purchased and without the written permission of the author.

For my sister, Heather.

Inhaling in life is easy. It’s the exhaling—the letting go— that’s the hard part. This was something I learned over the course of a few months. It became a permanent thought, something that took up residence in my mind, something to never be forgotten.

I had known the Conner boys my entire life. They had always been my next-door neighbors. Our mothers had been best friends growing up and our dads played golf together on Sunday afternoons. The Connor boys were always there, always a part of me.

There was a running joke among our mothers…a joke about which twin I would eventually end up with. At least, I had always thought of it as a joke, until we began growing up and things started to change. This was when I realized the true harshness of life—how it can blindside you with the most difficult decisions and how sometimes, when it comes to those
decisions, we don’t really get a say…sometimes, Fate makes the choice for us.

“He’s staring at you again,” Jane, the petite brunette who worked with me at
Movie Night
, the only movie rental store in town, said from beside me. I shrugged
my shoulders and heard her grumble. “That is one thing I will never understand about you, Katie Elliott.”

“And what is that?” I stopped checking in movies and turned to face her, crossing my arms over my chest as I braced myself for whatever craziness she was about to spew my way. Jane was a rising sophomore and the apparent president of the Kyle Conner fan club.

“How Kyle Conner could be
so
into you, and yet you won’t even give the poor guy the time of day.”

“Oh, I’ll give him the time of day,” I laughed, “literally, but not figuratively, the way you’re insinuating.”

“Why not?” Jane asked with more mystification in her voice than I had ever heard before. “Can’t you see how
smoking hot
he is? Just looking at him makes me drool and wish I could have all of his babies.” She sighed dramatically.

I glanced across the store at Kyle, watching him as he paced up and down the aisles, searching for a movie to watch that night. I tried to see what everyone else saw. He was good-looking, there was no doubt—both of the Conner boys were. They were identical twins—but for some reason, Kyle just didn’t do it for me. I continued staring at him, taking in his confident, self-assured swagger, wondering exactly what it was about him that turned me off. My mind shifted to thoughts of Derek, my twin of preference, and I pictured his slow smile and the cute way he chewed on his bottom lip when he was nervous. Kyle turned down another aisle. His eyes shifted my way, catching me staring at him. He licked his lips and grinned all confident-like before returning to his search for the perfect movie. My cheeks flushed and I began to busy myself with checking in movies again, hoping Kyle hadn’t thought that the blush creeping up my neck and spreading to my cheeks was because of him. What was wrong with me? They both looked exactly alike. Why couldn’t I just like the one who liked me?

“Good God, that smile,” Jane gushed all fan-girl-like beside me. “I swear, if I were you, I would
so
be all over that.”

“Whatever,” I laughed, hoping she didn’t catch the nervous ring to it.

Kyle sauntered over to us with so much added swagger in his step that I thought it was beyond laughable. “Ladies,” he winked, as he placed his movie on the counter for one of us to ring up.

When Jane froze like a complete idiot, gawking at him like he was some celebrity or something, I shifted to the computer.

“A Cheech and Chong movie, really?” I asked, not surprised in the least by his less than stellar movie pick.

“Really. After you get off, you want to come over and partake before watching this hilariousness?” he asked, leaning against the counter, his bright green eyes glittering in the fluorescent lights.

“I don’t think so,” I said, allowing my distaste for his recreational use of marijuana to lace my words heavily.

“Come on, Kat, just once. It would be fun. Promise.” He wiggled his eyebrows at me suggestively and I felt my cheeks betray me as they heated with embarrassment for the second time in his presence.

“I’ll pass, Kyle. Thanks for the offer though,” I insisted. “One night on this movie?”

“One of these days, my persistence is going to pay off and you’re going to say yes to me, Kat. When you do, you’re going to be so incredibly surprised by me and my charming ways that you’ll be kicking yourself in the ass for not saying yes to me sooner.” Kyle grinned confidently as he handed me five bucks from his wallet.

I smiled and shook my head as I got him his change. Sometimes, he could be so freaking arrogant.  That was it, that was what turned me off about him completely—his personality. A person’s personality really played a part in their looks. Kyle and Derek might both be drop-dead gorgeous guys, but their personalities were what made them so different to me. Unfortunately for Kyle, I wasn’t into the whole cocky, arrogant guy thing. I was more into the quiet, reserved kind of guy. Derek’s personality was definitely more to my liking.

“I doubt that,” I sneered. “Here’s your change. Enjoy your movie.”

“Are you going to Tanner’s party tomorrow night?” he asked. My demeanor didn’t bother him in the slightest, as he took the change from my hand. This was how we worked. Kyle came on to me; I brushed him off.  Lather, rinse, and repeat.

“Awesome, I’ll see you there.” He grabbed his movie off the counter, slapped the case against his palm, and headed for the exit. “Night, Kat; night, Jane.”

“Night,” Jane and I both called after him at the same time, her voice sounding completely breathless.

“So freaking hot! I swear you’re like in denial or something…there is no way you could not want to get with that. No way!” Jane insisted the second the door closed behind him.

“I just don’t see him like that,” I shrugged, busying myself with checking in movies again. I didn’t like talking about the Conner twins, mainly because I didn’t want to slip up and accidentally reveal my feelings for Derek. Reason being that, I knew it would change everything between the three of us. If I couldn’t be sure that it was 100% for the best, then it was better left unknown to everyone, including Derek.

“You need to get your eyes checked then.” Jane threw her arms in the air dramatically and grabbed a stack of movies I had just checked in to return to the shelves.

I grabbed the duster from underneath the counter and began making my way around the store, absentmindedly dusting, while wondering if Derek would be at the party tomorrow night. I hoped so, but on the same hand, I didn’t, but only because Cal Carlson had asked me to go with him and I’d agreed. I didn’t think I could focus on Cal if Derek was anywhere in the vicinity. If he was though, I guess I would have to try. Tomorrow night would be interesting.

I sauntered into BI-LO, attempting to appear casual, as I glanced through the automatic doors that separated the carts from the main store, searching for Derek. Mom had called just before I left work and said she needed me to swing by the grocery store on my way home to pick up a gallon of milk and some salad stuff. I had whined and complained over the phone, but deep down, I was more than happy to make that stop. BI-LO was the grocery store where Derek worked and if I remembered his schedule right; he was supposed to be working tonight.

I leaned against the row of green carts and stood on my tippy-toes to get a better look into the store where the cash registers were, searching to see if Derek was there bagging groceries. He wasn’t.  Someone cleared their throat behind me and I jumped, startled out of my skin.

“Excuse me,” some grouchy looking old man said as though my presence annoyed him.

I took a step back to let him pass and then began pulling out the first cart in the row I’d been leaning against without any luck. “Great,” I muttered under my breath.

A familiar low chuckle filled my ears, sending sparks of warmth throughout me. “Need some help?”

I turned and found myself at eye level with Derek’s chin. My eyes slid to his lips. The same lips I had fantasized about kissing numerous times. Swallowing hard, I smacked my palm against the handlebar of the cart I’d been attempting to tug free and smiled. “Hey. Yeah, I could definitely use some help. I can’t get this cart out.”

Derek slid between the cart and me. One of his hands gripped the handlebar tightly, as the other braced firmly against the cart it was jammed into. My entire body heated from the nearness of his presence. His guy scent—I had never been able to distinguish it entirely, but had at one point figured out that it must be some type of soap or shampoo—surrounded me and I breathed it in deeply. I loved the way he smelled.

“Sometimes these things just stick and others…” he released his death grip on the handlebar and started tugging and pulling on one of those little baby seat belts until it pushed up through a hole and released the cart I had been trying to get free. “Sometimes, they get stuck on those clasps. Here you go.”

“Ah, I’ll have to remember that for next time,” I said, his scent still lingering in my nose and making the butterflies in my stomach flutter around like crazy.

“So, what are you here for?” Derek asked casually as he pushed my cart through the automatic double doors for me and into the mouth of the store.

“Mom needed me to pick up a gallon of milk. She forgot she didn’t have enough to make the Hamburger Helper she’s already started—that and she wanted me to get some stuff to make a salad so we could at least have something green with dinner.” I answered with a dramatic eye roll as we both paused in front of the bakery-made cookies and cupcakes.

I nodded. “See you around,” I said, hating how lame I sounded, as I pushed the cart away.

“Yeah, I’m actually supposed to be spending the weekend with Missy. Her parents are out of town, some family reunion or something, so we’ll be there for sure,” I answered, realizing too little too late that I had offered up more information than he had asked for. “What about you, you going?”

“Cool, see you there,” I said with a smile just before my legs bolted away from him again. Yuck, I really needed to stop talking, because my mouth was just oozing lameness.

“Hey,” Derek shouted after me again. “I forgot to ask. Do you guys want a ride?”

My heart pitter-pattered in my chest, but I feigned indifference. “Sure.”