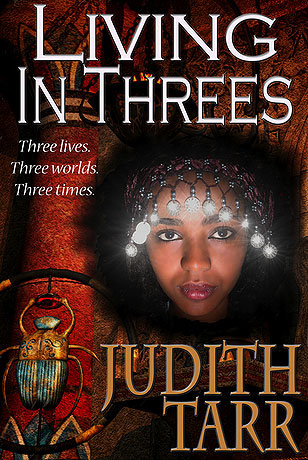 For the real Meredith

This book could not have existed without the help of many friends and colleagues.

My agents, Russell Galen and Ann Behar, believed in it enough to let it go—and to encourage me to publish it through Book View Café.

But before that could happen, this happened: a successful Kickstarter, a round 256 backers, and the wherewithal to transform a manuscript into a book.

Thanks to the backers who have made it possible for
Living in Threes
to make its way out into the world:

You are amazing. Thank you all.

Sixteen is a weird year. Make it sixteen with your dad off finding himself again—not that he’d been around much even before the divorce—and your mom in remission from ovarian cancer, and you can pretty much figure you’re being dumped on from somewhere.

What I didn’t figure, and couldn’t ever have figured, was how bad it was going to get—and how completely impossible both the bad and the good part would be.

They aren’t looking in the places I fell into, or finding it where I found it, that wonderful and terrible summer.

I had plans with the usual suspects: Cat and Rick and Kristen. They had their licenses already, got them before school let out. I was
this
close to mine, with the September birthday and being the class baby.

It was going to be our summer on wheels, when it wasn’t on horseback or out on the beaches. We had it all mapped out.

Then Mom dropped the bomb.

I came home from the barn early that day, the day after the last day of school. Rick had the car, but his dad wanted it back by noon. So we’d hit the trails at sunup, then done our stalls and hay and water in a hurry with him already revving up the SUV.

When I got home, wringing wet and filthy and so smelly even I could tell I’d been around a manure pile, Mom was sitting out by the pool.

That wasn’t where she usually was on a Thursday morning. She still had her work clothes on, but she’d tossed off the stodgy black pumps and splashed her feet in the water.

Her hair had all grown back since the chemo. It was short and curly, and still a little strange, but I liked it. I thought it made her look younger and prettier.

She turned and smiled at me. She looked tired, part of me said, but the rest of me told that part to shut up. “Good ride?” she asked.

“Good one,” I answered. “Bonnie only threw in a couple of Airs. And that was because Rick was riding Stupid, and she was living up to her name. Bonnie had to put her in her place.”

As long as I was out there, I figured I’d do the sensible thing. I dropped my shirt and riding tights and got down to the bathing suit any sane person wears under clothes in Florida summer, and dived into the pool.

The water felt absolutely wonderful. Mom watched me do a couple of laps.

Finally I gave in. I swam up beside her and folded my arms on the tiles and floated there, and said, “All right. Tell me.”

She was still smiling. It must be something really good, to bring her out of court and all the way home.

“I’ve been talking to Aunt Jessie,” she said. “She’s staying in Egypt this summer, instead of coming back home to Massachusetts.”

I knew that. I talked to Aunt Jessie, too. She Skyped in at least once a week. Checking on me, and on Mom through me.

But Mom was in story mode. I kept quiet and let her go on.

“She’s really excited,” Mom said. “She’s made some discoveries that she thinks are very important, and with everything that’s been going on over there, she hasn’t been at all sure she can keep getting the permits. She actually got a grant, which is just about unheard of these days.”

That came out of the way Mom was smiling—excited, as if she had a secret and she couldn’t wait to share. She’d been dreaming about Egypt for years, following all of Aunt Jessie’s adventures and reading and studying and talking about maybe someday, if she had time, if she could get away, if—

There were always reasons not to go. First she had to make partner in the law firm. Then she got asked to be a judge in the county court, and that needed her to be always on. Always perfect. And then there was the cancer.

So maybe she figured it was now or never. I could see that. Even get behind it. But I wasn’t sure how I felt about it.

Mom away for the whole summer? Was she really ready to leave me for that long? I didn’t have my license yet. How was I going to—

All that zipped through my head between the time I asked my question and the time Mom answered, “Including you.”

That stopped me cold.

Mom grinned at my expression. “You really thought it was me? I wish, but there are a couple of big cases coming on trial, and I might be called to the bench for another one, and—”

“You said you were going to take it easy this summer,” I said. “We both were. What would I do in Egypt?”

“Learn,” said Mom. “Explore. Be part of something big.”

“Florida is big enough for me,” I said. “What about Bonnie? And the trip to Disney World? And turtle watch? Turtle watch is important. The college needs us to count those eggs. That’s big, too. It’s real. It’s now. Not fifty million years ago.”

“Four thousand, give or take,” said Mom, “and Disney World will keep. So will the turtles.”

“Bonnie won’t. Bonnie needs me. She just got bred. We don’t even know if she’s pregnant yet.”

“We will tomorrow,” Mom said. “You’ve got a week till you leave. It’s all taken care of. Visas, everything. Aunt Jessie’s been working on it for months. It’s her birthday present to you.”

She’d never said a word to me. Not even a hint.

“It’s your dream. Mine is to spend the summer with my friends and my horse. Not baking in a desert on the other side of the world. There are terrorists over there. Revolutionaries. Things get blown up.
People
get blown up.”

“You will not get blown up,” Mom said.

I pulled myself out of the water. “I’m not going,” I said.

Mom didn’t say anything. I grabbed a towel off the pile on the picnic table and rubbed myself dry, hard enough to make my skin sting, and marched off into the house.

For once in the history of the universe, none of the usual suspects was answering their phone. I barricaded myself in my room and went laptop surfing instead.

I surfed for horse stuff and beach stuff and turtle stuff. Nothing whatsoever to do with Egypt. Who cared about sand and terrorists and old dead mummies? The only sand I wanted was right underneath me in Florida.

When my phone whinnied at me, I almost didn’t bother to answer it. After all, nobody could be bothered to answer me.

But the whinny was Cat, and she had an excuse. She’d been driving her kid brothers home from soccer.

Big time. But with the phone in my hand and the screen staring at me, I couldn’t manage to fit it all into 160 characters.
Tell u tonight,
I said.
Still on for ice-cream run?

Normal me would have squeed and wanted to know all about it. Crisis me punched
OK. See u then,
and threw the phone on the bed.

Mom was still home. I could hear her rattling around in the kitchen. Then the TV came on, rumbling away in the background.

That was weird. I almost went to find out why she wasn’t going back to work, but my mad was still too new. If she thought she was going to wait me out, she could just keep thinking it.

The computer beeped at me. The phone was lighting up with messages.
Now
everybody wanted to talk-text-email. All I felt like doing was crawling inside a book and pulling the cover over my head.

I tried every book in my to-be-read file, and even in my favorite-dead-tree-rereads pile, but my eyes kept slipping away from the words. Finally I opened my laptop instead, but I shut off the wi-fi.

It felt weird. Kind of guilty. Like telling the whole world to eff off.

What I needed was my own words, or words that came to me. Words that weren’t about here or now. I needed to go away, really far away, deep inside myself where everything was different. Where I wasn’t even me.